Vuelta Look Back: The 2017 Vuelta a España will climb the mythical slope of the Alto de l’Angliru on the penultimate stage 20 on Saturday, September 9th, 120 kilometers after the start in Corvera. Our Grand Tour expert, Ed Hood, was on l’Angliru back in 2008 – we relive his day on the monstrously steep Asturian climb.

Ed’s day on the Angliru:
The Vuelta is already in the midst of one of its hardest editions in recent memory, but tomorrow, it will take on a whole new level of crazy, as the race hits the Angliru. Back in 2008, Ed Hood was on the ground on the Angliru, and his day on the legendary climb is well worth taking another look at. Read on! 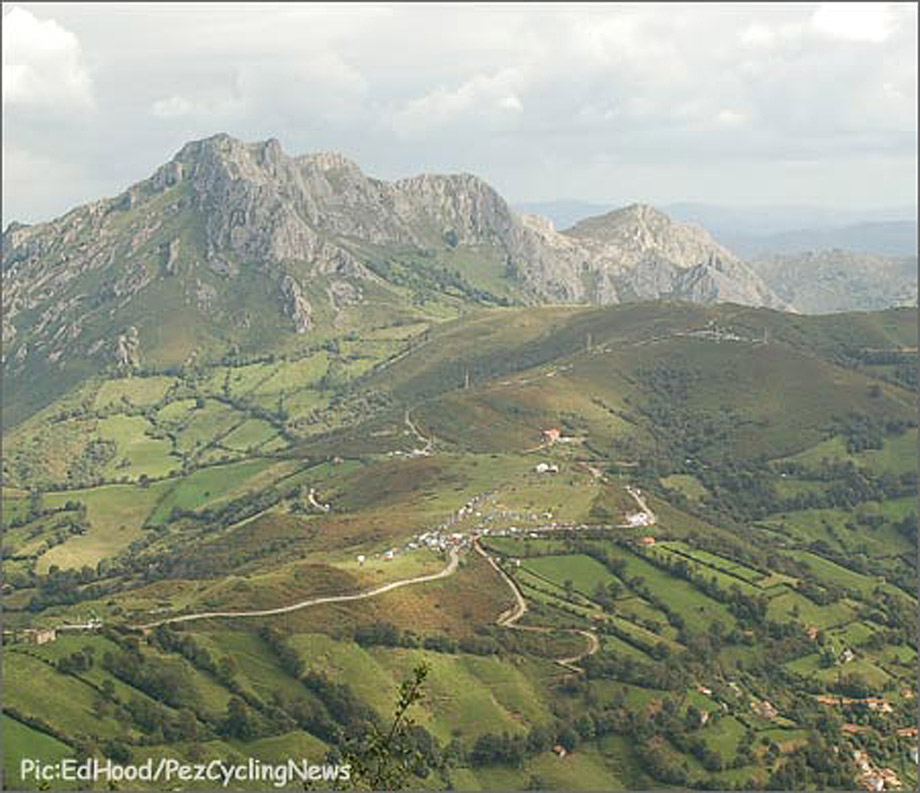 06.15: Davie is up before the alarm. Shower, pay the extortionate parking fees, battle the one way systems out of Oviedo in the dark and in no time we’re there – La Riosa.

08.00: Over coffee we’ve made our first buddies for the day, Lulon and Ander from Gipuzkoa in the Basque country. On the slowest schedule, it’s 10 hours ’til the race gets here, but the clans are gathering already. 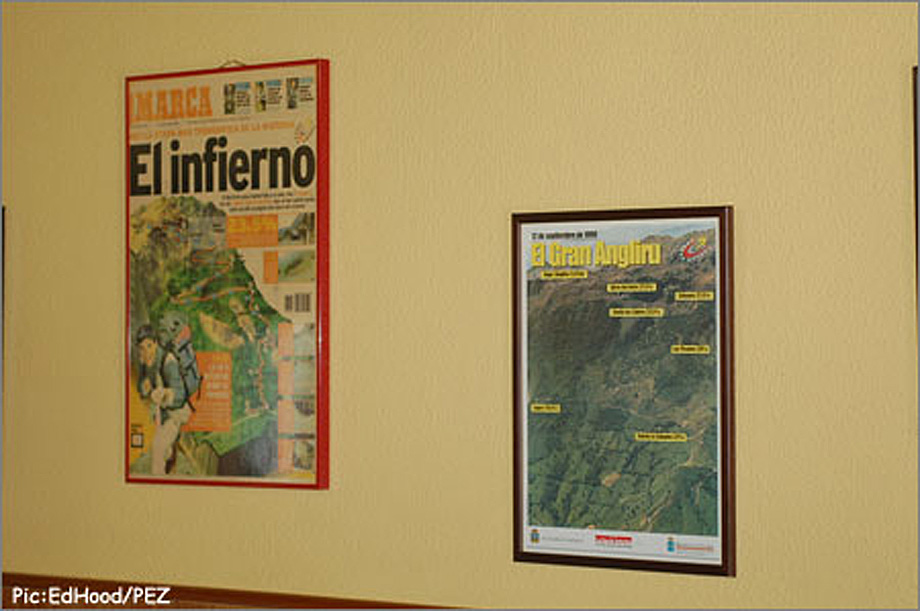 09.45: Bar Chus, 1.5K into the mountain, coffee time, with a shot of local moonshine from a wine bottle – wow! On the walls are framed newspaper covers featuring the Angliru and photos of Olano training on the climb. 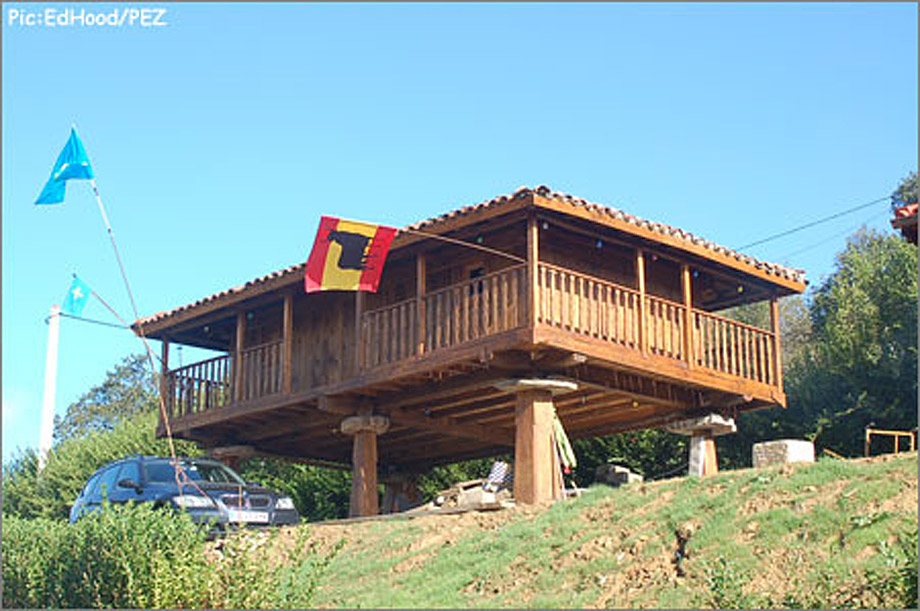 10.45: It’s hot, real hot, damn hot, as we take short steps ever upwards; past cows with clanging bells and traditional Asturian ‘horreros’ – grain stores on stilts. Crowd traffic is steady, rather than busy, but there are still at least six hours ’til ‘show time.’ 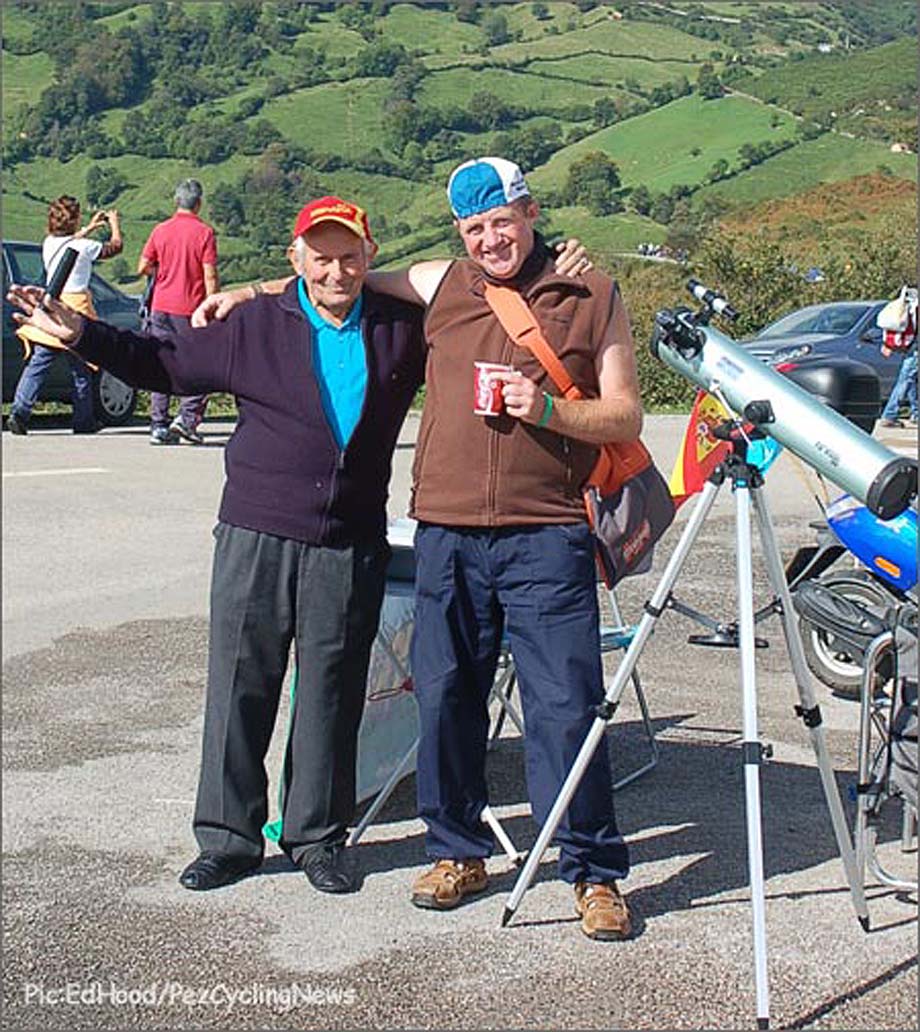 11.15: We meet Miguel; “the telescope is not to watch the race, it is to watch my wife, I don’t trust her!” His English is perfect and Chechu Rubiera is his cousin – it’s a small world.

We’re on the only flat stretch of the mountain now – maybe 400 meters long – and there are eight kilometers to go. 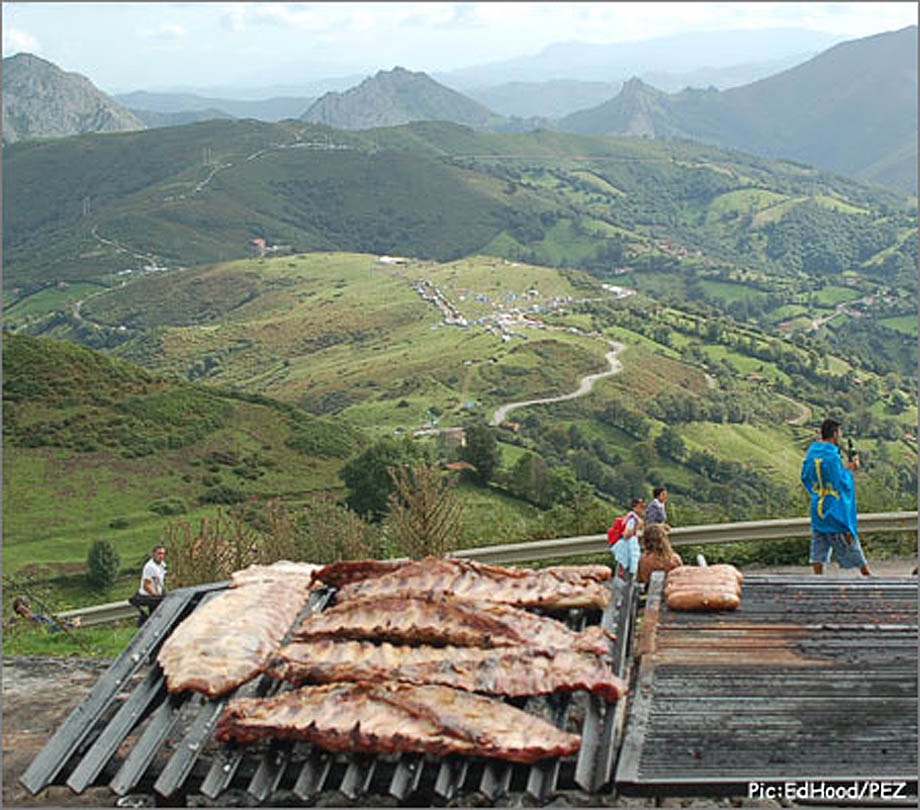 Noon: Six K to go and there’s a food tent – you can have barbecued half cows or boiled octopus (pulpo) “dos Coke por favor!” The road is so steep now that it’s hard to walk on the inside of the hairpins, the sun has slipped behind a cloud and we’re glad of the cool breeze for a few minutes. 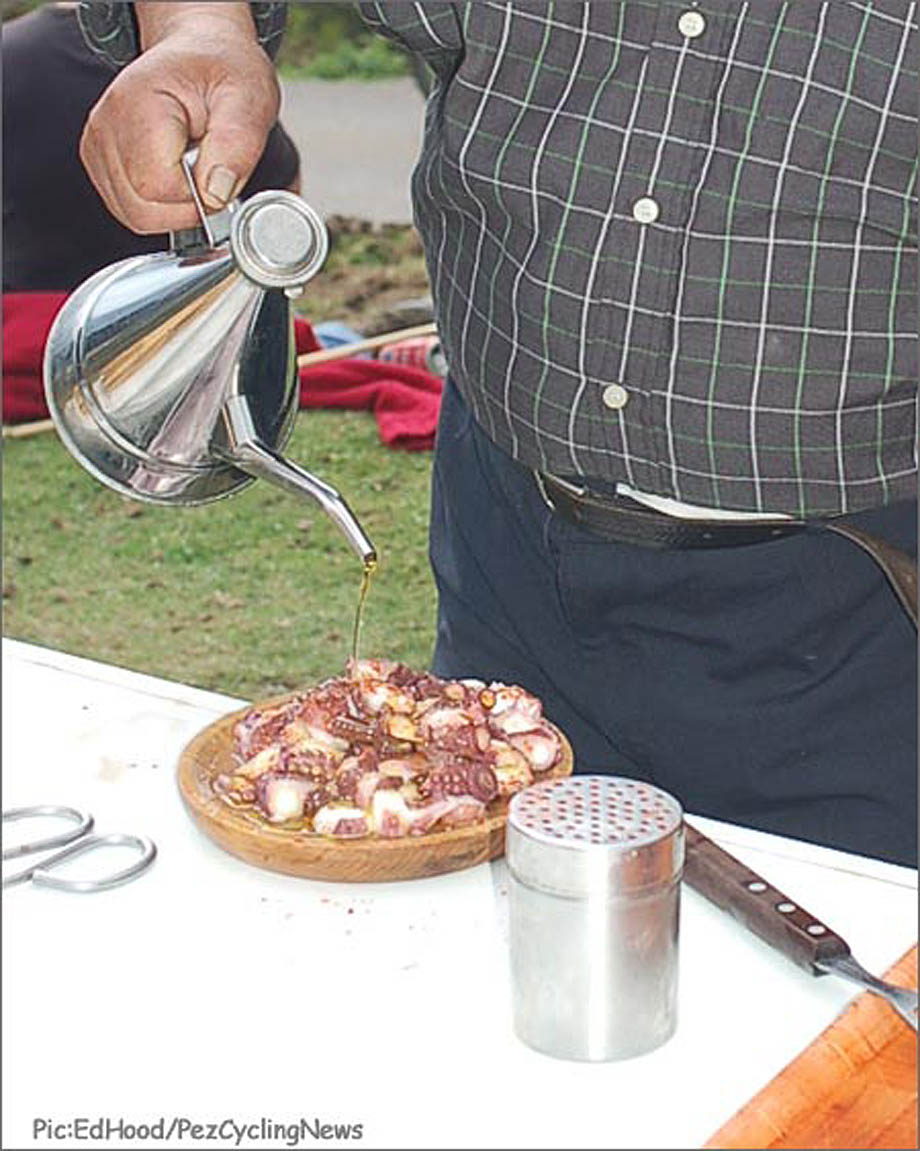 13.20: We’ve walked 8.5 K and have four to go. Whilst it’s not an audience of Tour standards, there’s a steady string of folks walking and pedaling up the hill. The road was closed to non-race vehicles at 09.00, but the fact is, that apart from the car parks at the flat section and the top, there’s absolutely nowhere to park. 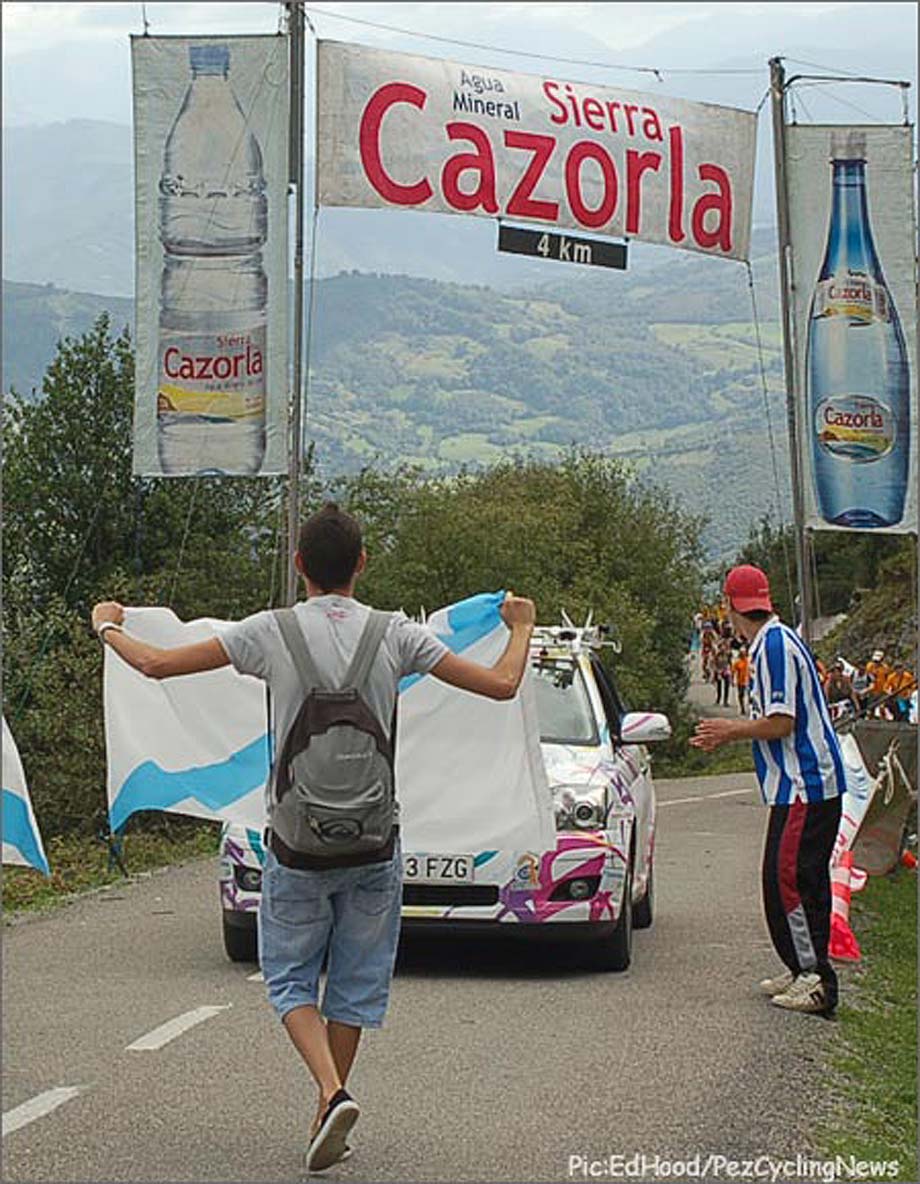 The road builders hacked away just enough rock for the string of tarmac, but nothing more. The Karpin-Galicia team car tries to ‘peep’ it’s way through, but two young fans with Galician flags insist on playing ‘torro’ with it. 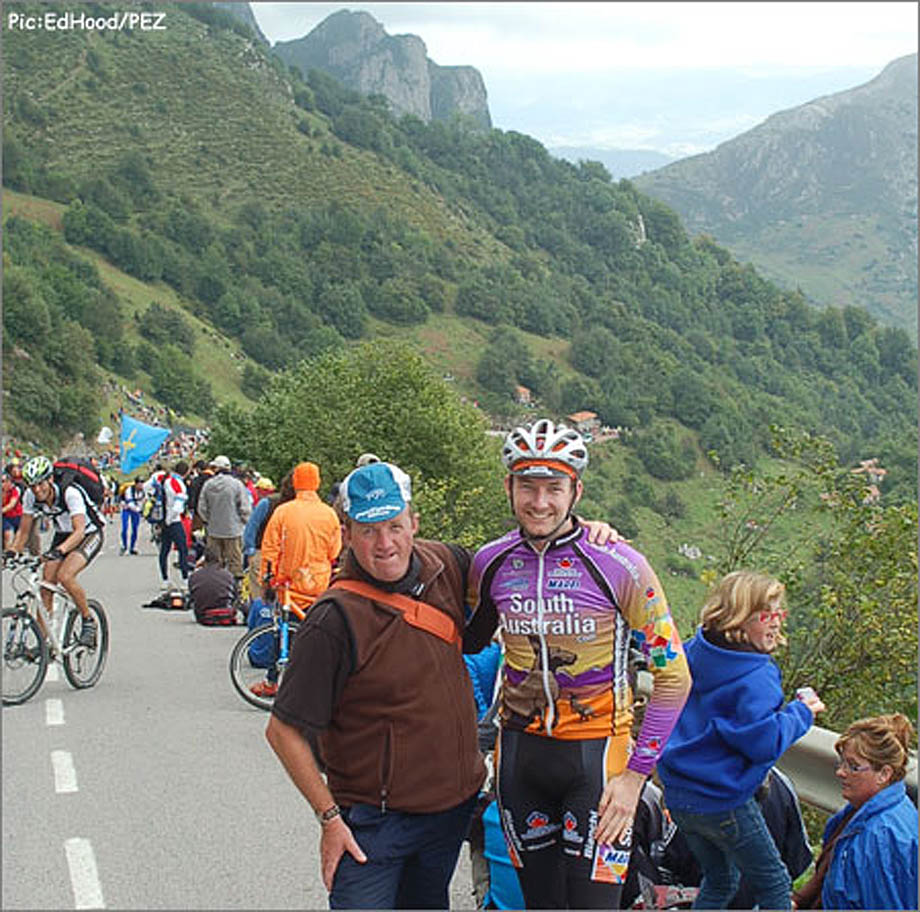 14.40: “PezCyclingNews? Oh! That’s Ed!” says Aussie Chris Truskett, we spotted his Mapei South Australia top and stopped for a chat – any excuse is a good one to stop walking!

If there’s any doubt about why the riders need a 34 x 28 (we’ve heard that some may go to 29), it’s dispelled by this section, one of the few long straights, leading into the hairpins just before the two to go banner – it’s hard to explain exactly how steep it is, but 23% seems no exaggeration – it’s tough to walk, never mind pedal. 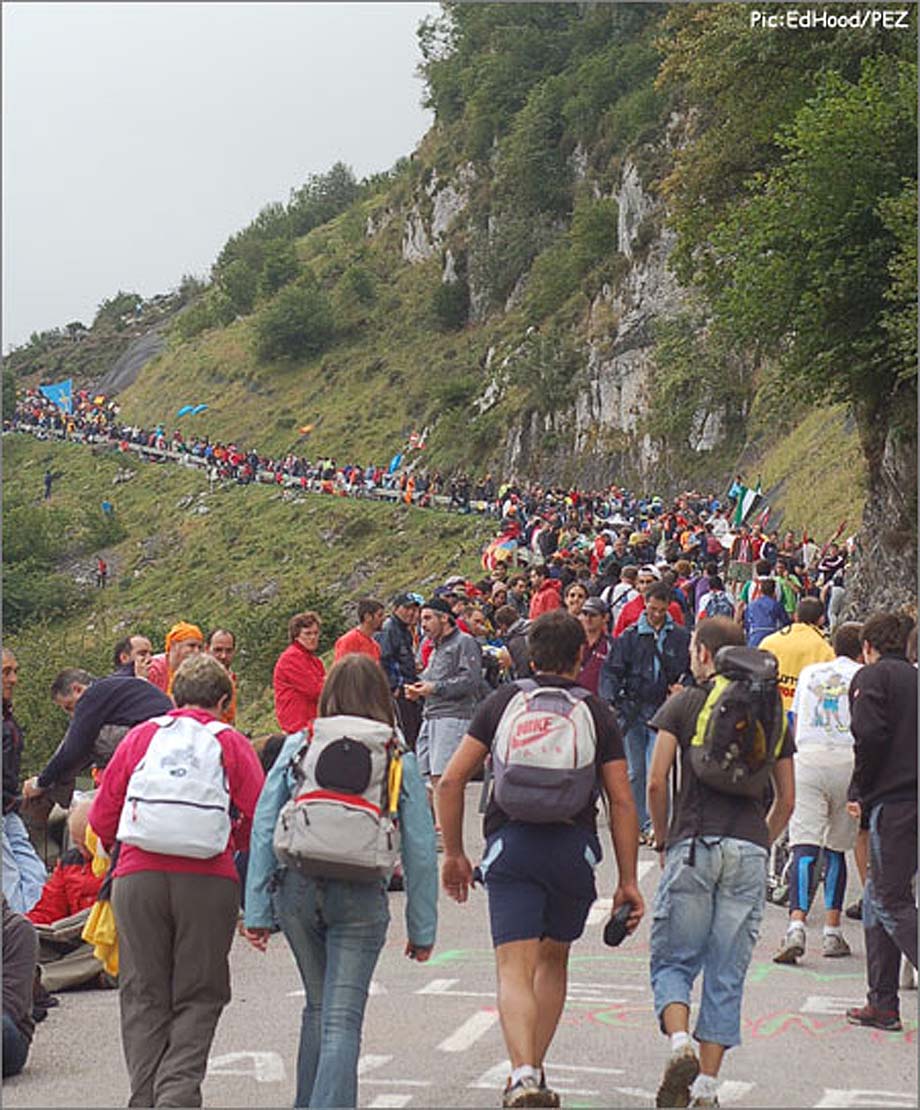 We decide to pitch camp here, we’ve walked more than ten kilometers and besides, the cloud is rolling in above us – we’ve not tramped all the way up here to have our photo opportunities wasted.

16.00: It’s very cold now, Al just emailed to say there are three riders away on the Colladona with 55 kilometers to go – I hope it gets warmer before they arrive, our hands are freezing. The breakfast cheese roll has long worn off, so we’re starving too.

16.30: The three leaders are on the Cordal, 30 k from us, Astana and Lampre are leading the chase – Cunego must fancy his chances. The clouds are thickening now, we may have to drop down the mountain to take our shots. The crowd isn’t huge and there are no ‘crazies’ like you get at the Tour – shame.

16.55: The Guardia Civil helicopter makes frequent passes above whilst Al emails that Christophe Kern is ‘en seule’ and not far from the climb. Martinez has been dropped in his gold jersey and Igor Anton has crashed – a bad day for the boys in orange. 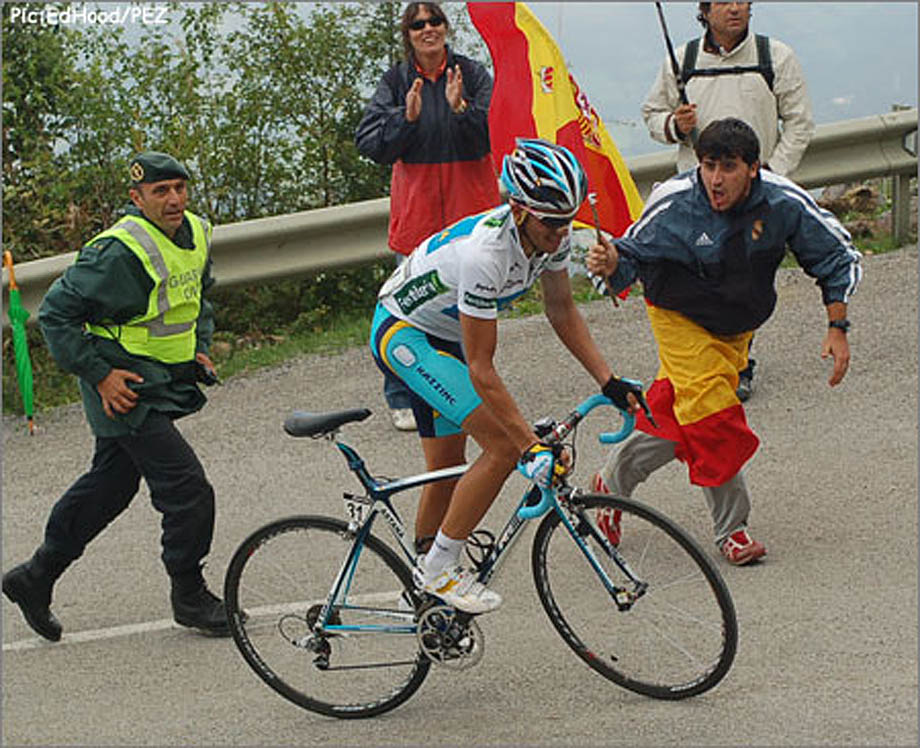 17.20: And there’s Contador! He’s ‘all shoulders,’ as the weight lifters say, not a joy to watch but he’s exciting and he’s flying.

Next it’s Valverde – and his companero, Rodriguez – he’s making amends for stage 12, as someone said to me later; “proving that he may be a dumb rider, but he’s a good one too!” the gap is maybe 35 seconds. Another gap, then it’s Sastre and Levi, am I imagining it or, or is the American thinking; “step on it, Carlos?” 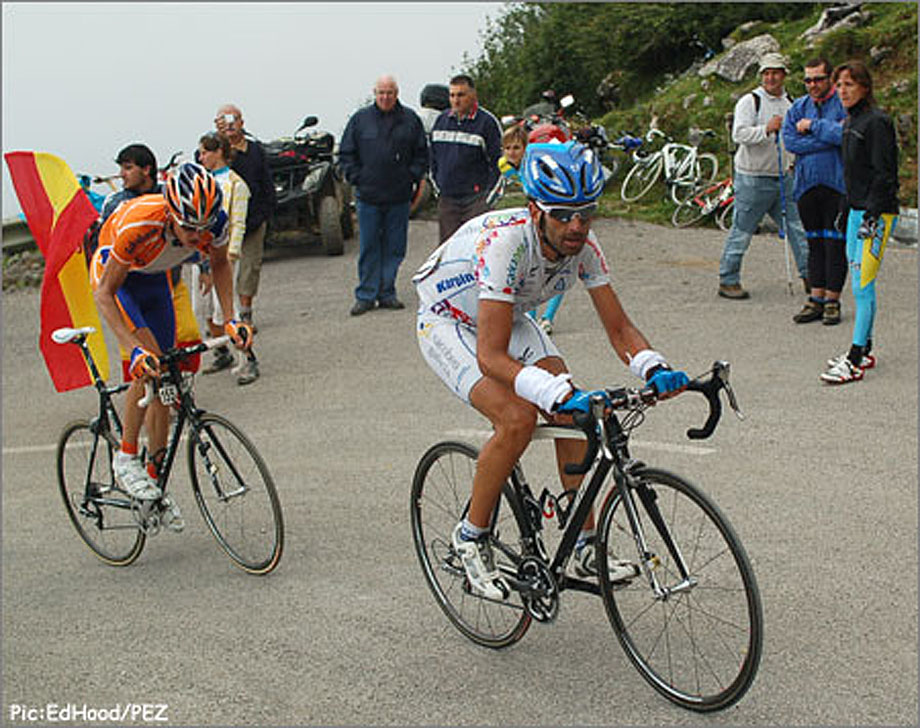 More fresh air, then it’s Mosquera putting the hurt on Gesink, whose head must be feeling too heavy for him as it’s slumped between his shoulders. The big GC issues are settled now, as the surprising Zaugg battles past, then Cunego and then it’s ones and twos – Bruz, Bettini, the gold jerseyed Martinez, the ex-gold jerseyed Chavanel, Boonen, Schumi and then it’s time for a little extra assistance. 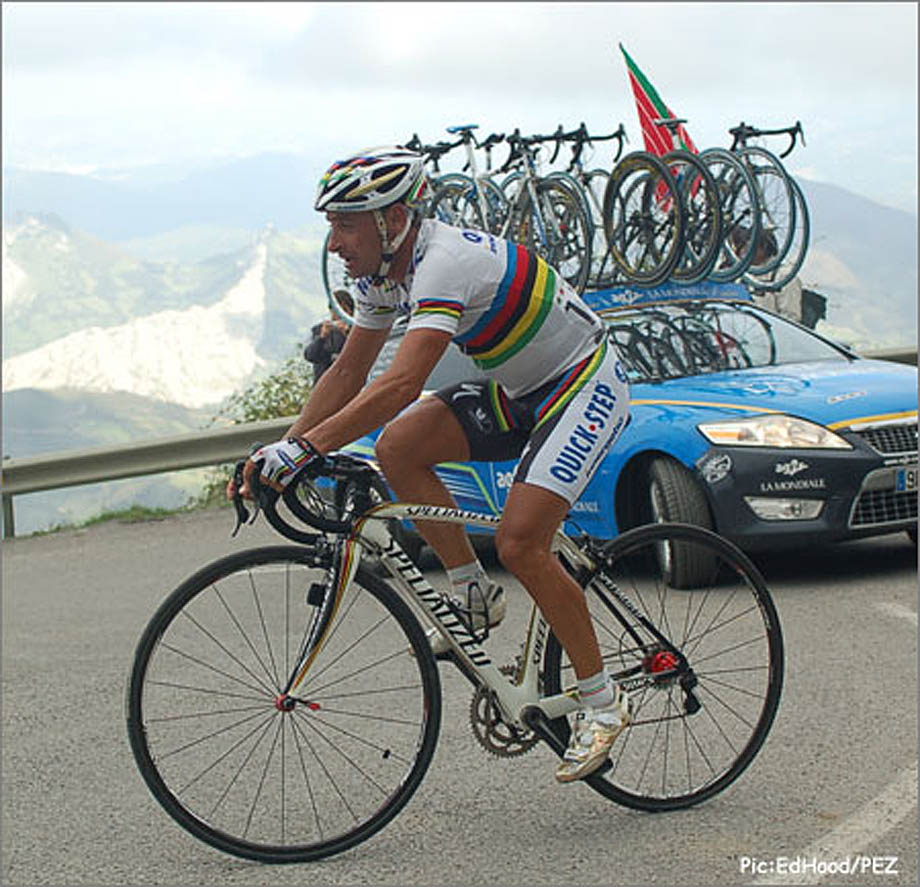 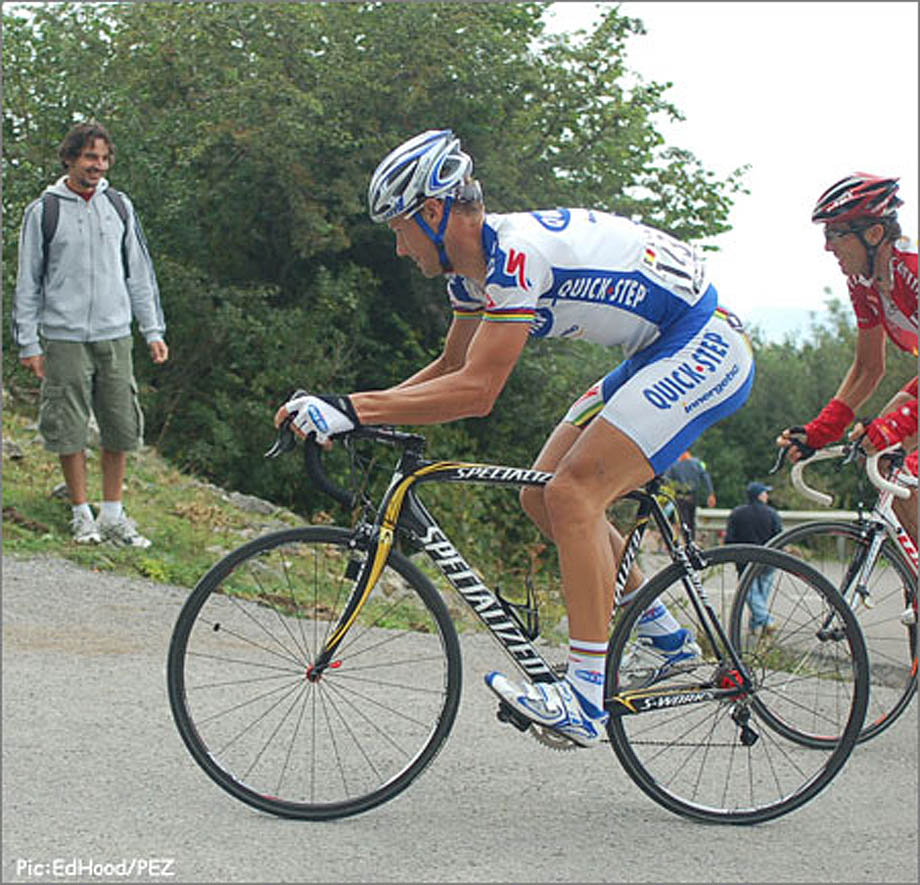 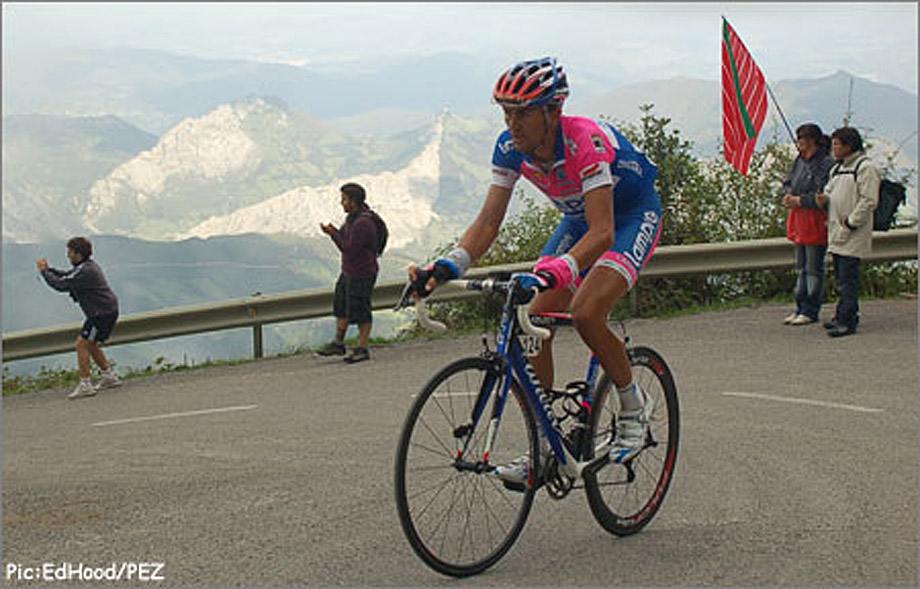 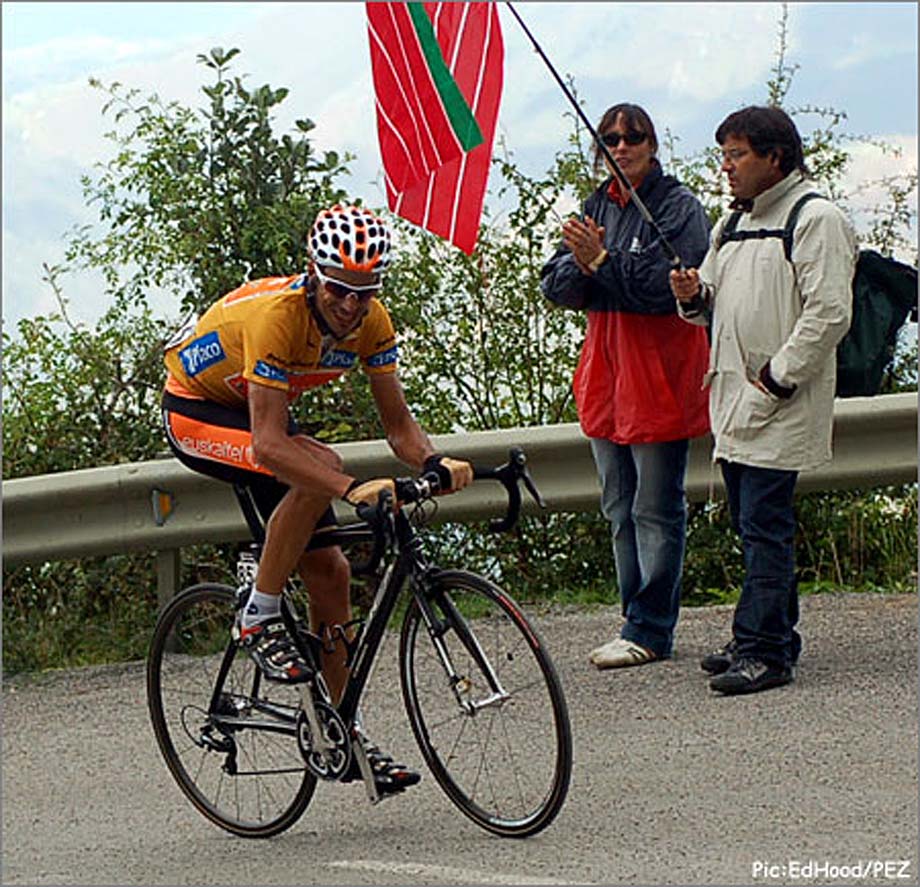 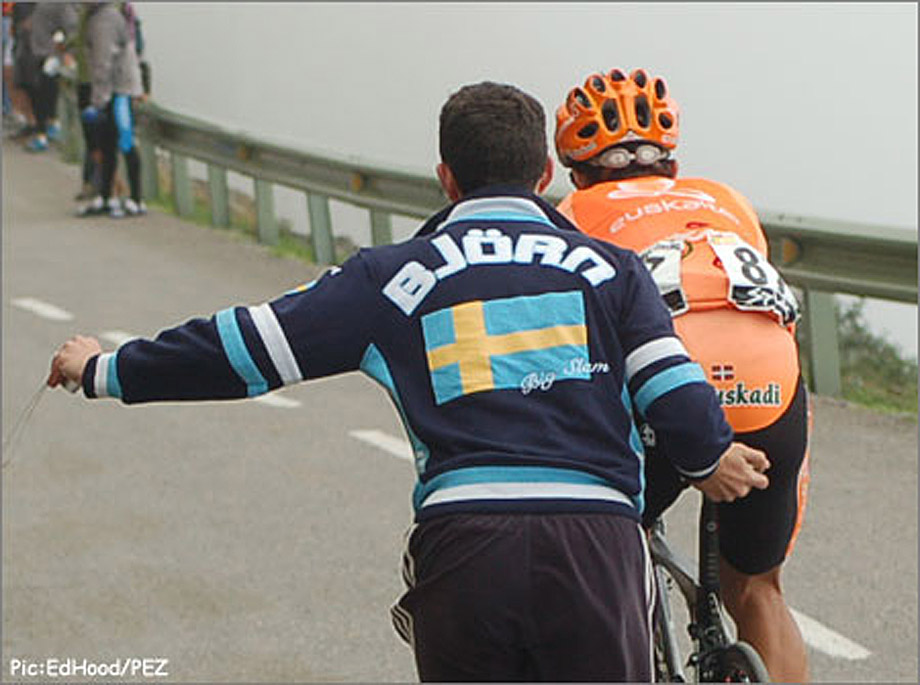 The pushes are mostly for Spanish riders, they have a quick look around for commissaires, then let the fans do the biz – Perez and Astarloza get the full sprint treatment. Even the Shimano service cars are in on the act – giving illicit tows. 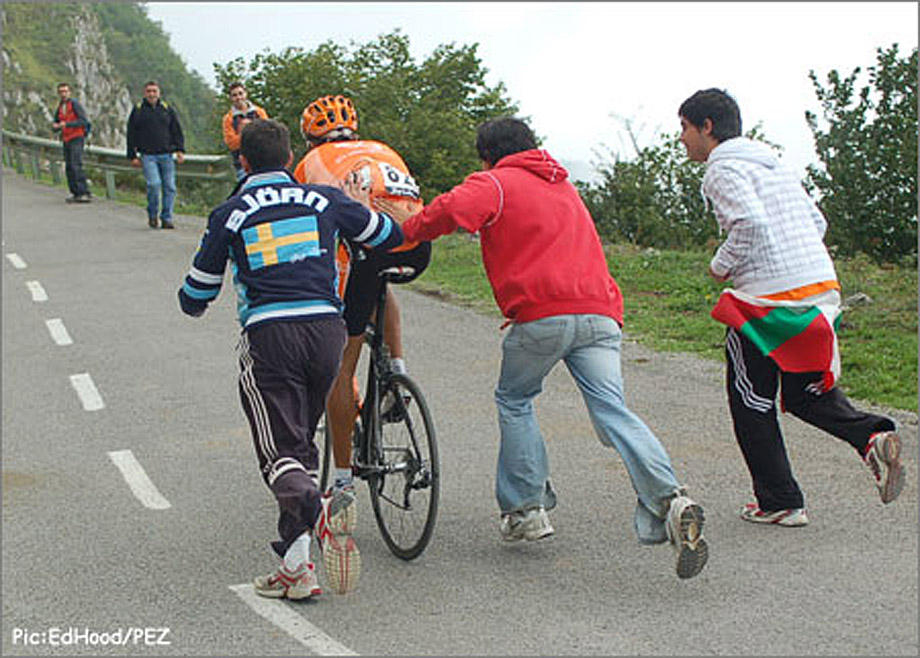 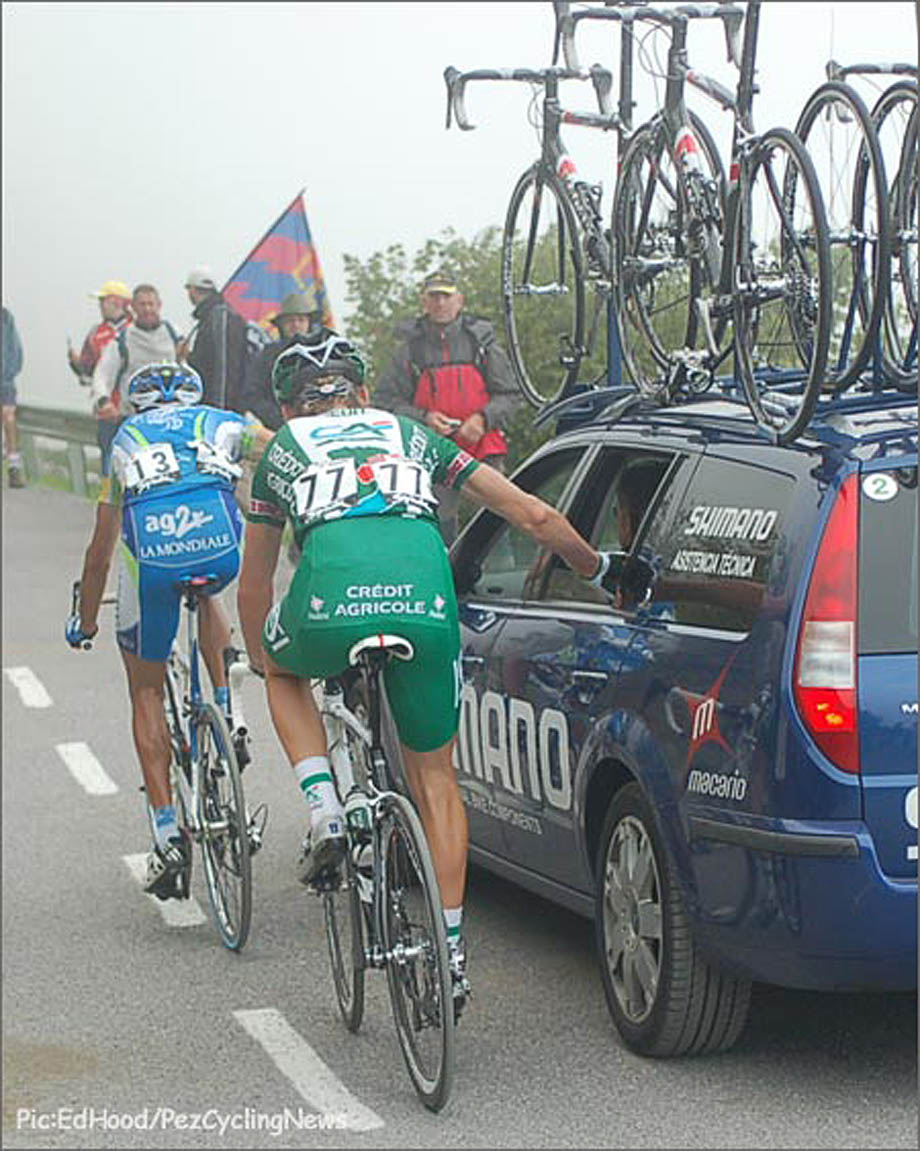 It’s maybe 20 minutes until the last guys pass. A communique has gone out saying that riders must go down in team cars, but some of them just ‘go for it’ anyway, picking their paths through the crowds with the grace of swooping swallows – Milram’s Sabatini makes it look so easy. 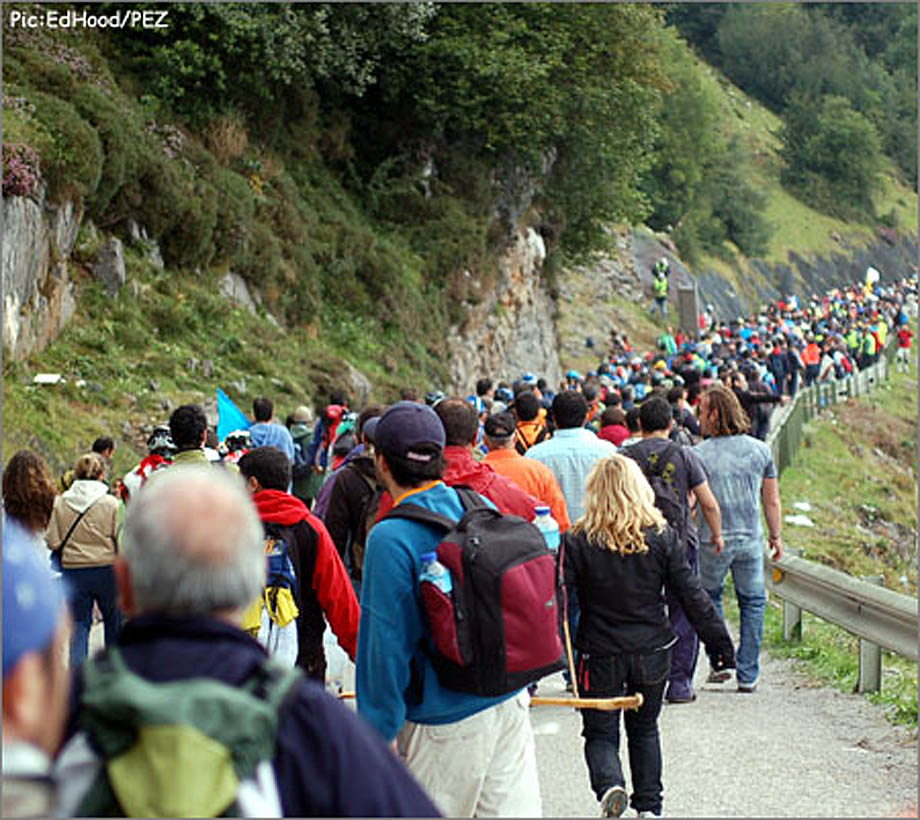 The team cars run through the crowds like ice breakers on the Bering Sea, some riders wave, some text, Tom Boonen snoozes. Our legs are really sore now, 10K up and we’ve done four down.

I flag a mini bus down, wrench at the sliding door and we leap aboard. “This is not the press bus, this is the sag wagon!” Alex, the driver tells us, but he knows exhausted journos when he sees them and we’re off down the mountain. 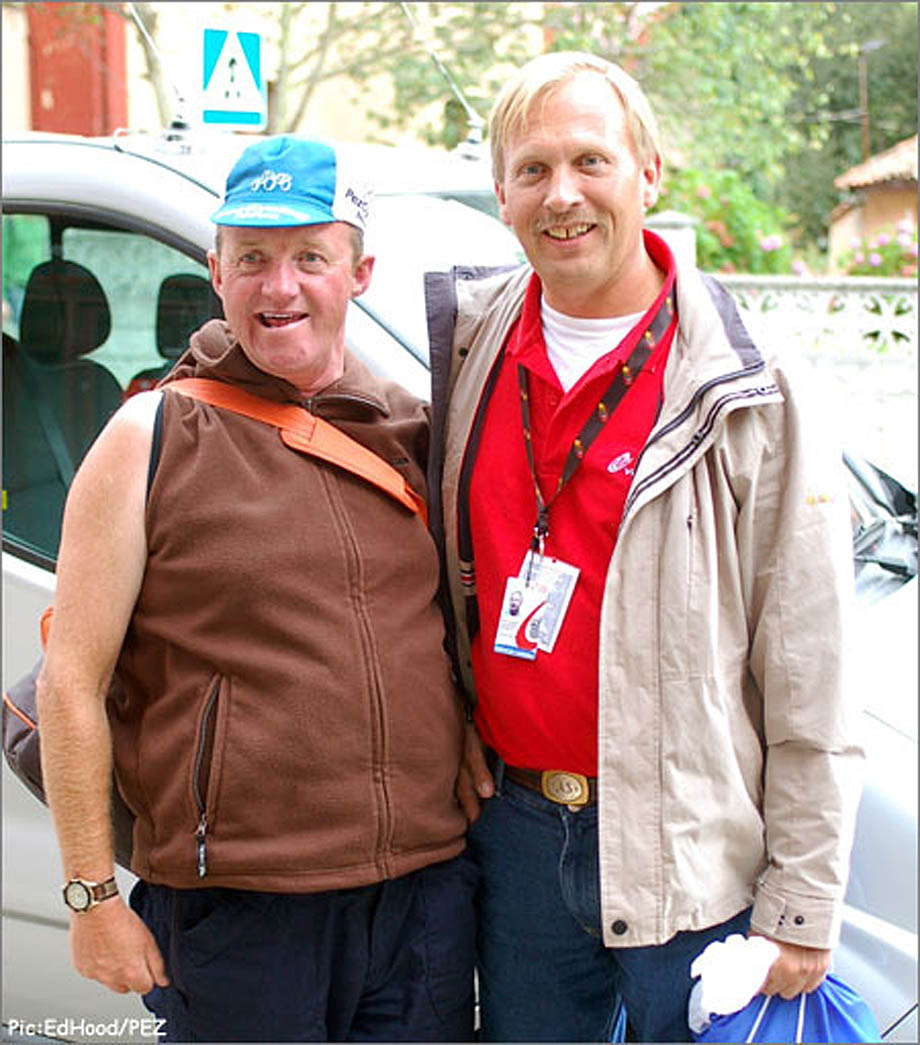 He’s a Dutchman who lives in Barcelona, today hasn’t been too busy – 81 Anton and 102 Methies. He was here the first time the Angliru was used ‘in anger’ – “the conditions were terrible, no crash barriers and the turns were very tight, it’s like a highway now!”

The sag guys don’t necessarily have to take the rider, he can go in his team car, or in the case of Anton, the ambulance – it’s the transponder off the bike they must recover.

Soon we’re being dropped off at the press room, we say ‘thanks’ then it’s time to organise photos and file copy – maybe tomorrow it will sink in that we’ve just spent “Un Dia en El Alto de L’Angliru”.

Thanks for reading and hasta mañana! 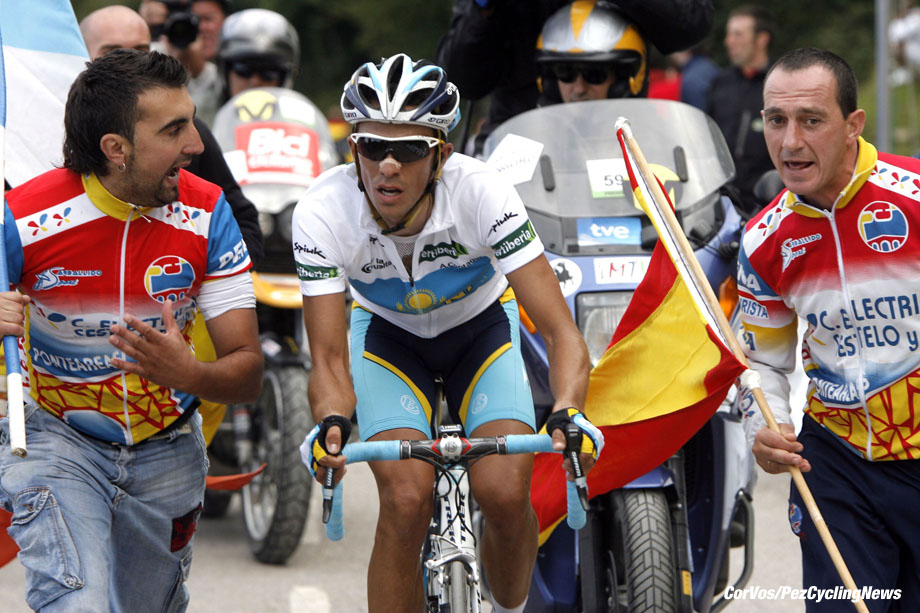 Why Don’t We Have a Current Lion Of Flanders?