By Edmond Hood On Nov 8, 2020
Share
Like PEZ? Why not subscribe to our weekly newsletter to receive updates and reminders on what's cool in road cycling?

Roadside Vuelta’12 Revisited: Ed Hood looks back at the final stage of the 2012 Vuelta in Madrid. ‘Ultimo kilometro!’ the ‘speaker’ bellows into his mic as up on the big screen, De Kort tries to make his legs forget about the Bola del Mundo. His ‘body weight over the pedals’ style is similar to his Capo, John Degenkolb who sits in his slipstream awaiting the mindful moment. . . 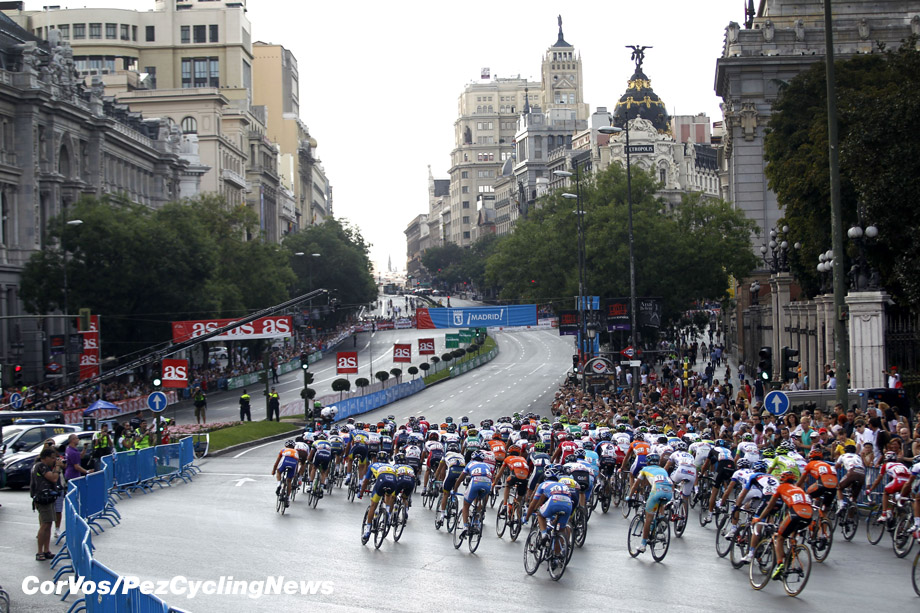 The timing must be right; Viviani is coming, so too are Bennati and Davis – men you can’t grant liberties to. But De Kort is running out of steam and the German can’t wait any longer, we’re at 100 metres to go and he’s already made the move, out there in the wind – ‘Benna’ is on him and Viviani is coming. The Liquigas man is rapid; his speed honed on the track and he makes ground rapidly. 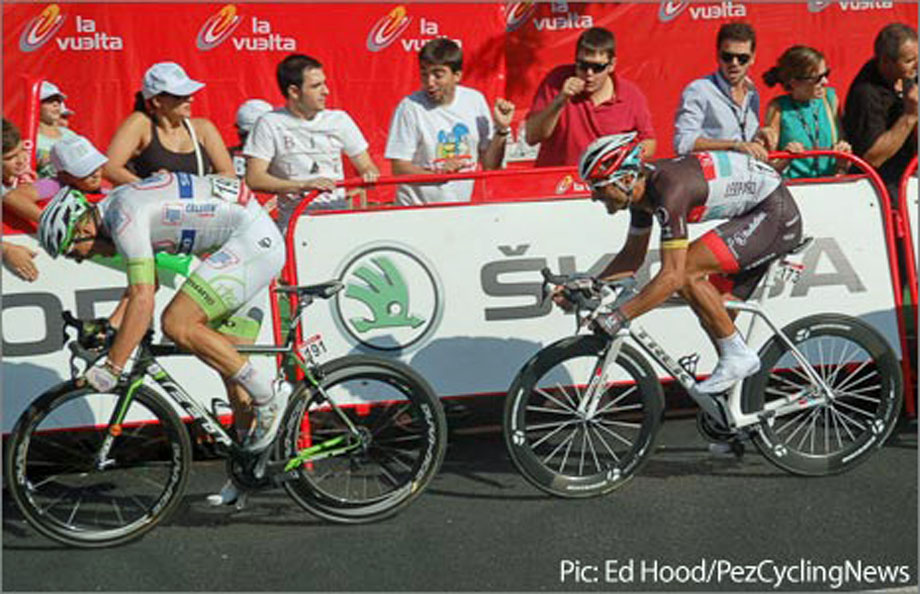 But again, Degenkolb proves he’s master of the long charge as neither Italian can quite get to him – five stages, not a bad Grand Tour for Argos. But we’re ahead of ourselves, again – let’s travel back to this morning. 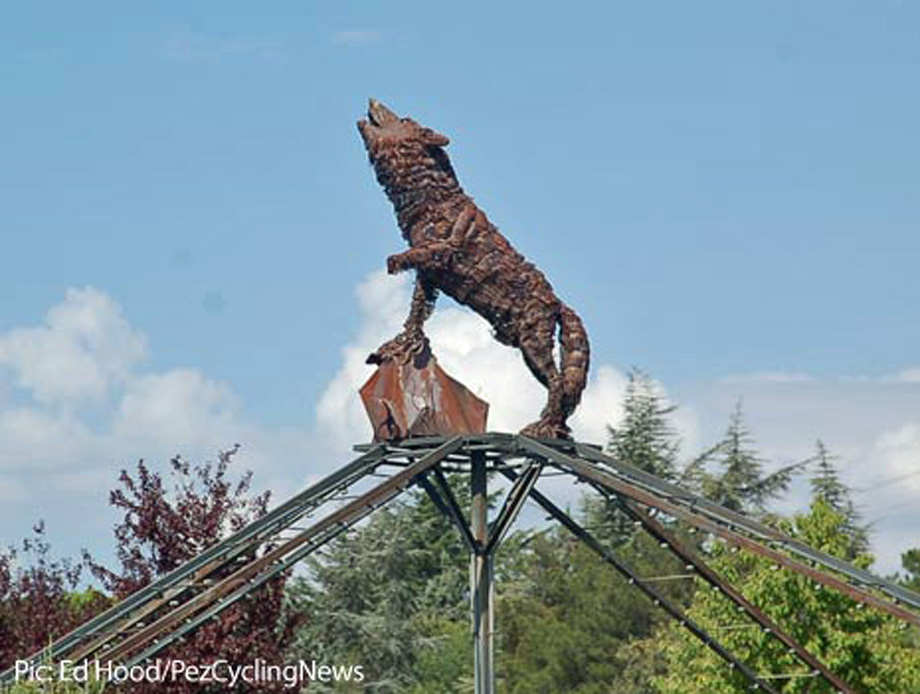 One of the Covadonga wolves has become a Vuelta fan and is down at Cercidella for the start of the last stage. 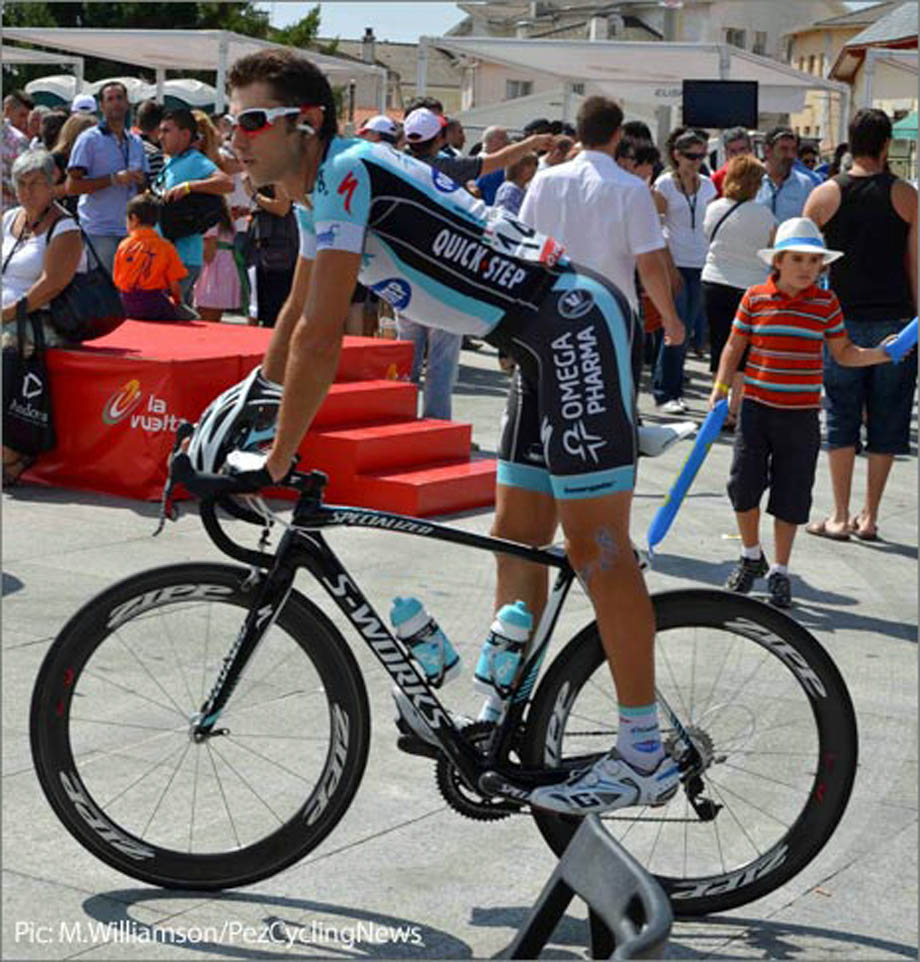 But howling wolves apart, the vibe is laid back at the start, Cuitu Negru stage winner Dario Cataldo ambles in to the village, we’re not sure why – there’s no free coffee. 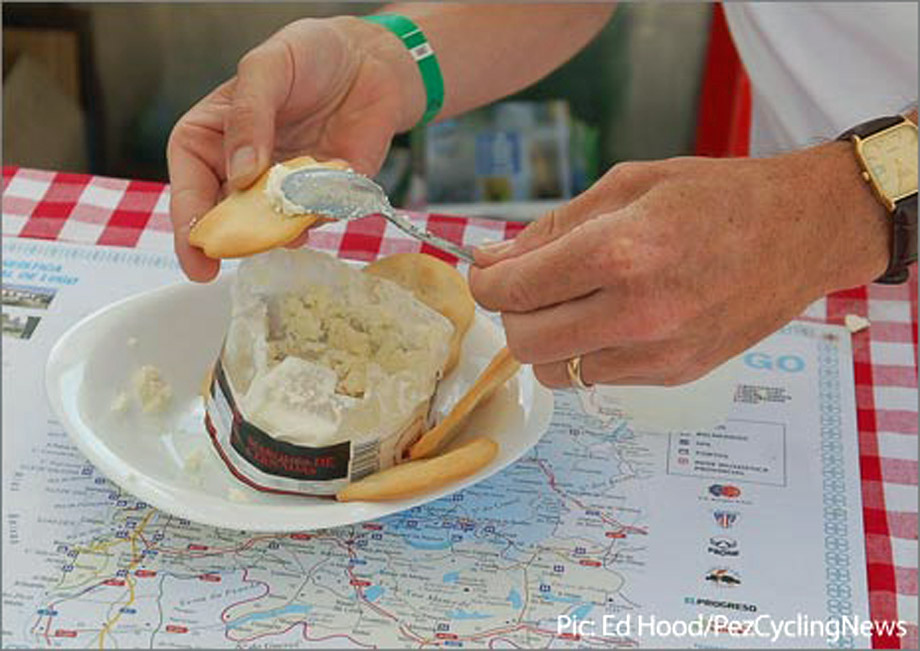 Not just eating local cheese and lingering too long in a wee coffee shop so that we nearly get stuck behind the race – as if we’d do that!

The vibe is mellow, the sun is hot as the 21st and final stage of the 67th Vuelta a Espana prepares for the gently descending road to Madrid. It’ll be less mellow for the nine laps of the Paseo de Castellano as the sprinters have their final say. Will Degenkolb make it five or can Swift save Sky’s Vuelta or Viviani do the same for Liquigas? We’ll find out later this afternoon.

The drive into Madrid isn’t the most photogenic and we’re startled to find the roads 100% open to traffic with less than hour ’til race time – I guess we get spoiled at le Tour? 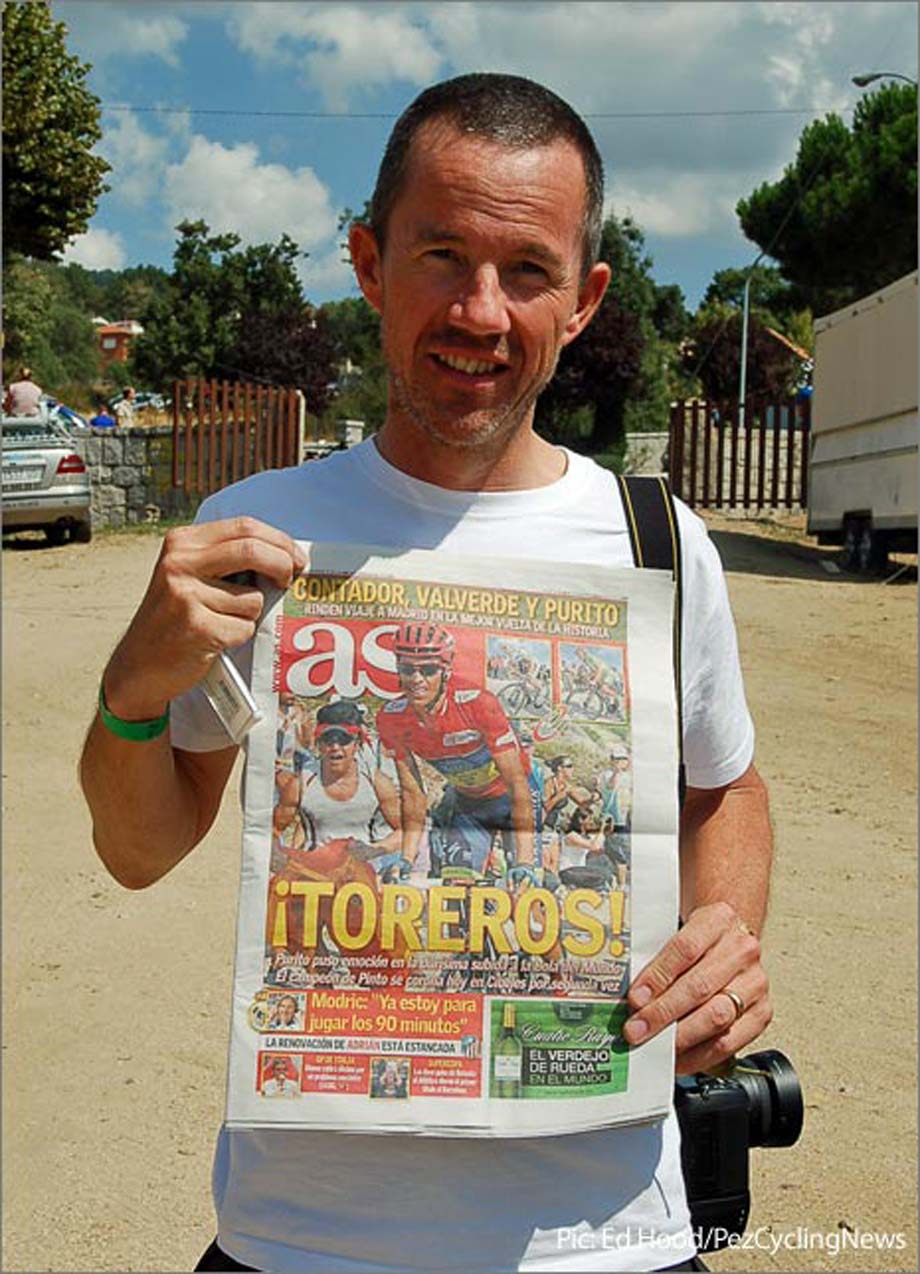 I check out AS, the sports daily, which headlines, “La Mejor Vuelta De La Historia” – ‘The best Vuelta in history,’ we’ll drink to that. It certainly made the Tour seem like a procession; whilst Rodriguez, Valverde and Contador aren’t men to, ‘settle for a podium place.’

They knocked lumps out of each other until the last metres of the Bola del Mundo, yesterday. 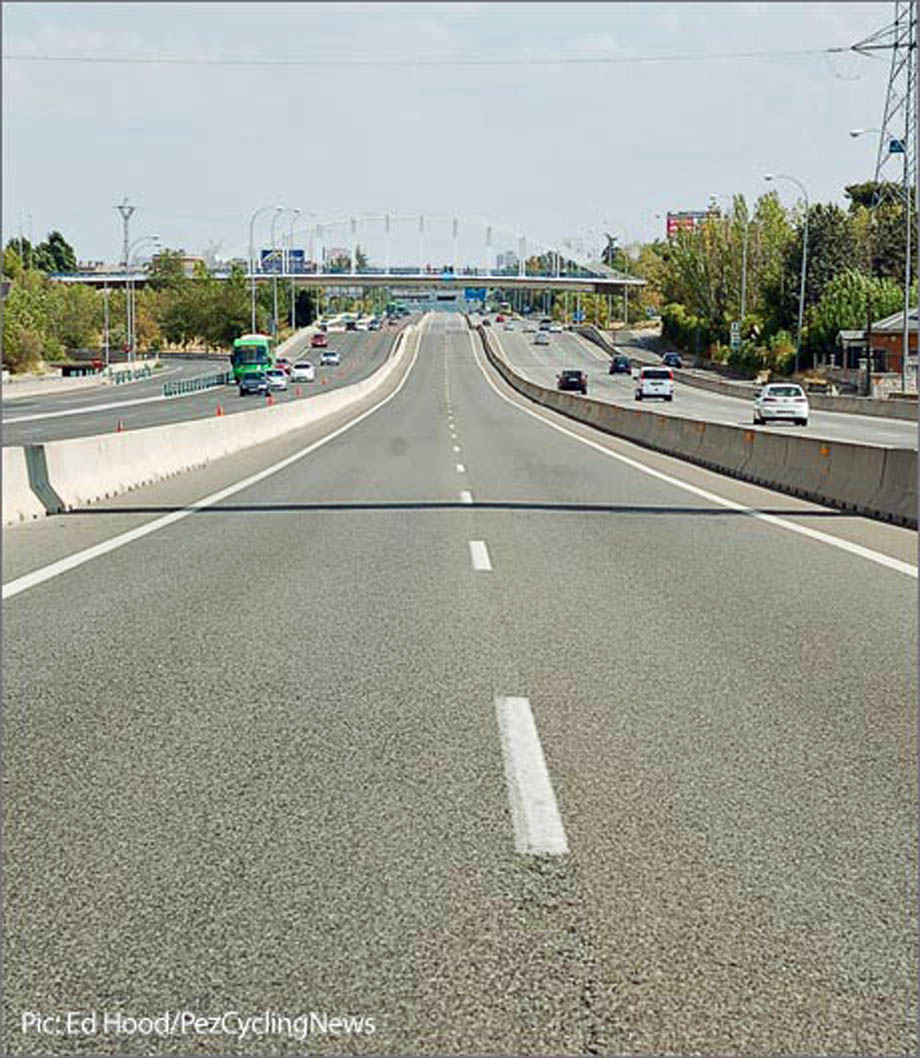 We’re on the motorway into Madrid now, but it’s closed for the day – just our Panda and the white line heading for the heart of the city. 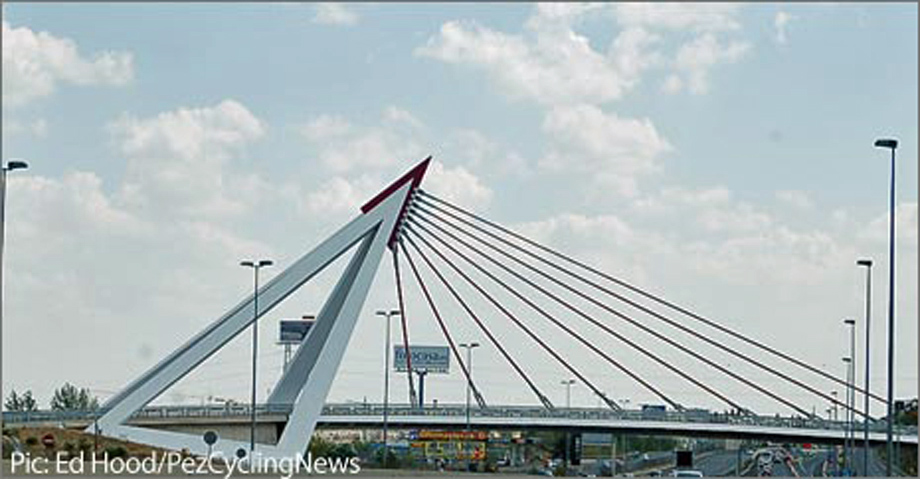 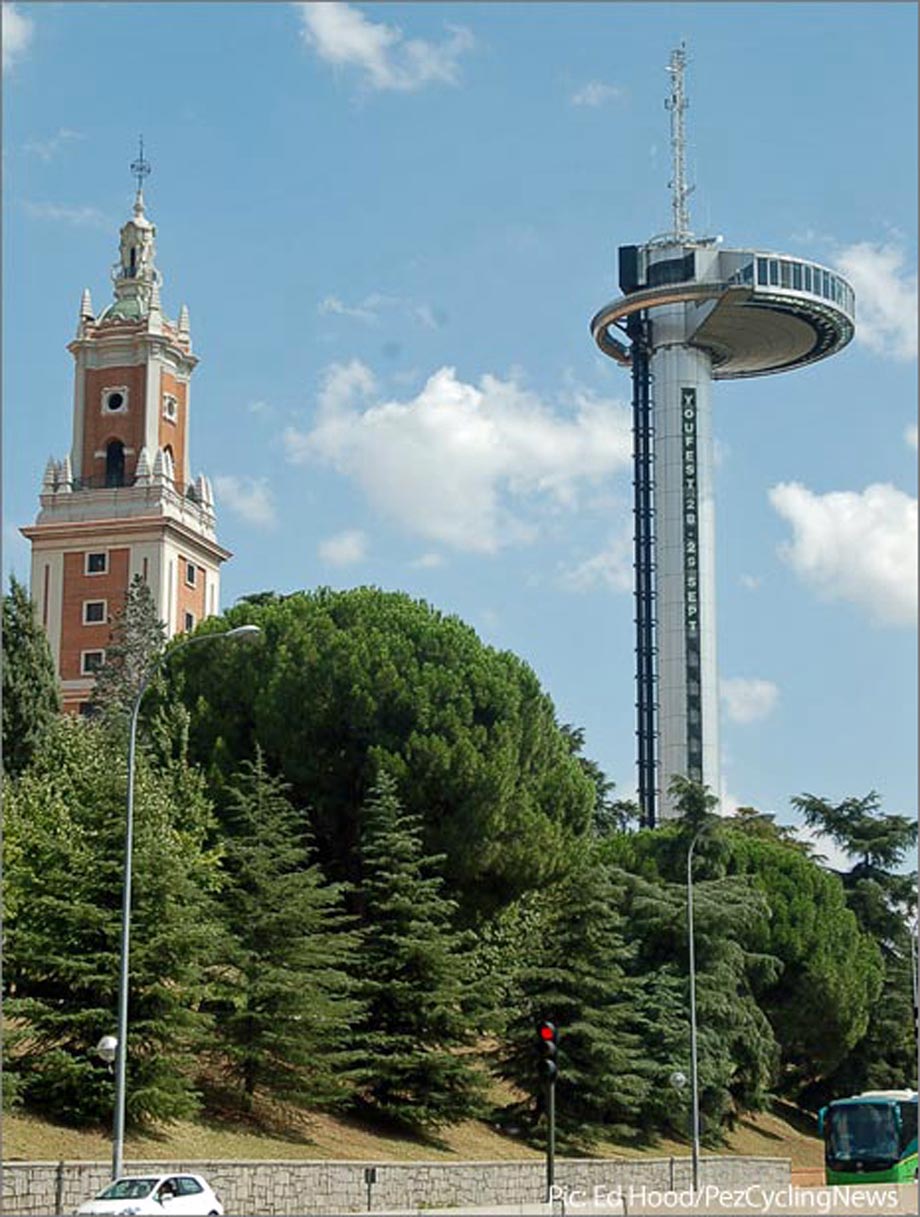 As we hit outskirts of the city, the photo ops get better, amazing modern bridges and that thing the Spanish do so well where the old sits perfectly with the new. Onto the circuit, abandon the car and get to work.

Tradition has gone out of the window with one aspect of the Vuelta. Back in the ‘old days’ when I used to come to Madrid to watch the finish of the race; it was the thing for the race leader and his team to ride an ‘exhibition’ lap of the circuit before the sprinters got serious. I remember gold jerseyed Toni Rominger’s CLAS-Cajastur equipo streaming into the city with Federico Echave at the head of affairs – head band and long hair streaming in the breeze. 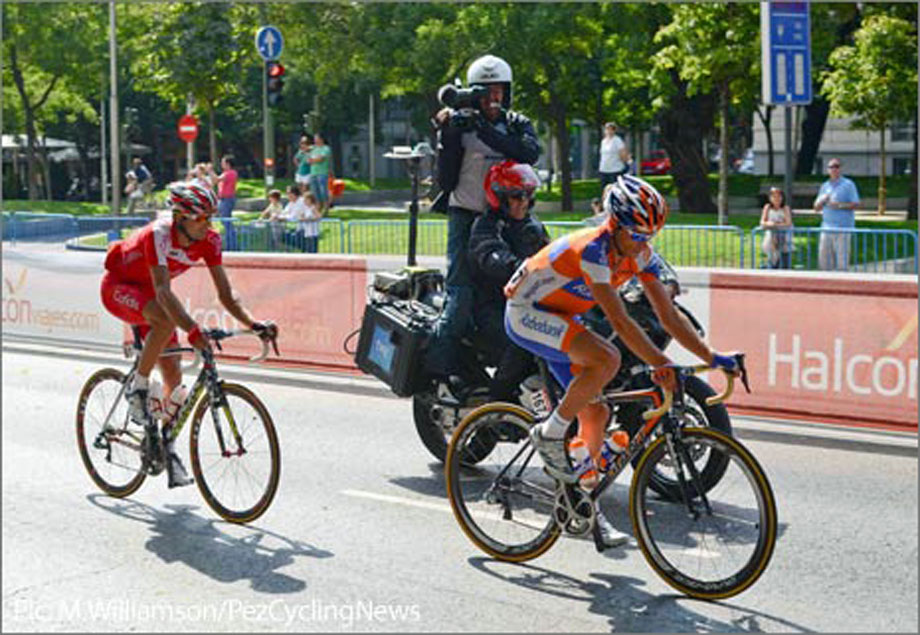 Not now, a Rabo and a Cofidis are first in to the city, but are soon to be swallowed, spat and countered by a break of six with Sergei Lagutin giving his all. 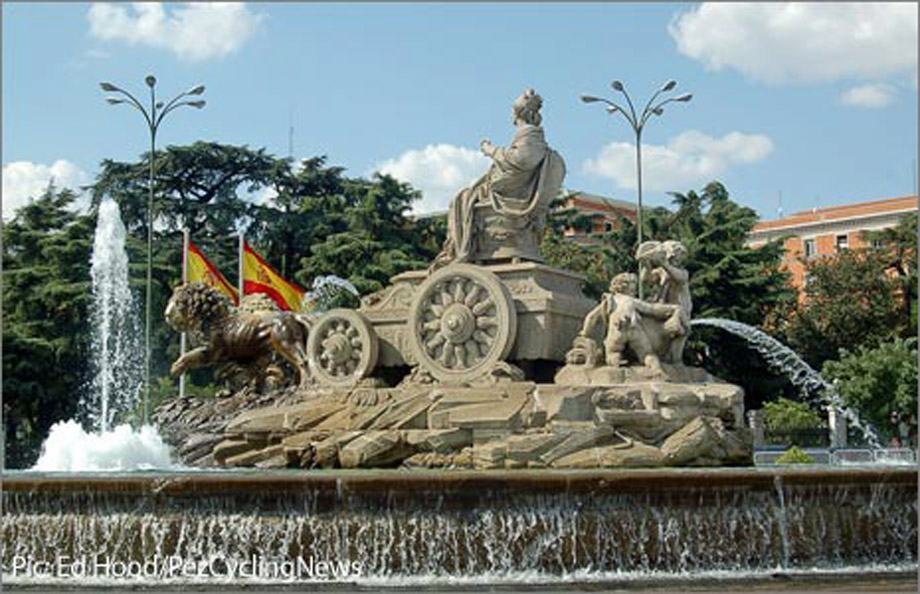 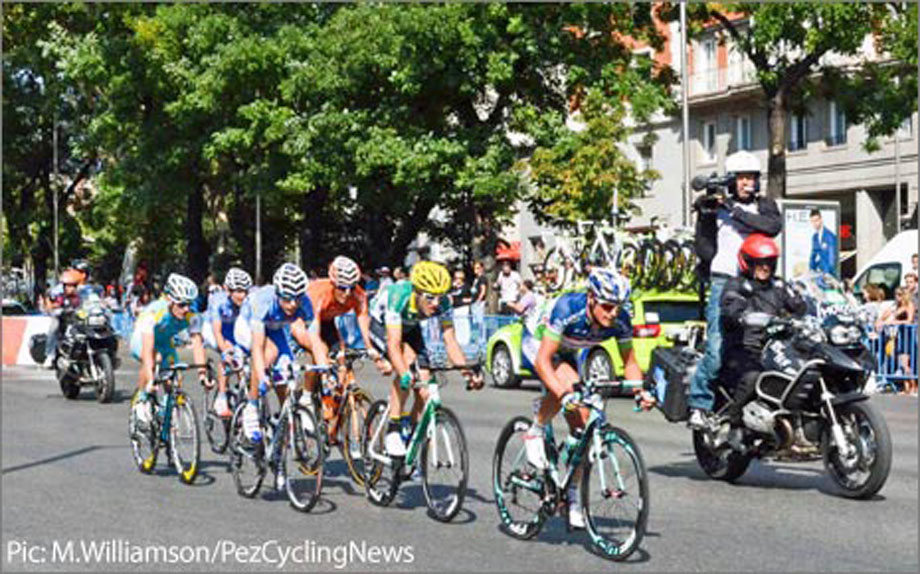 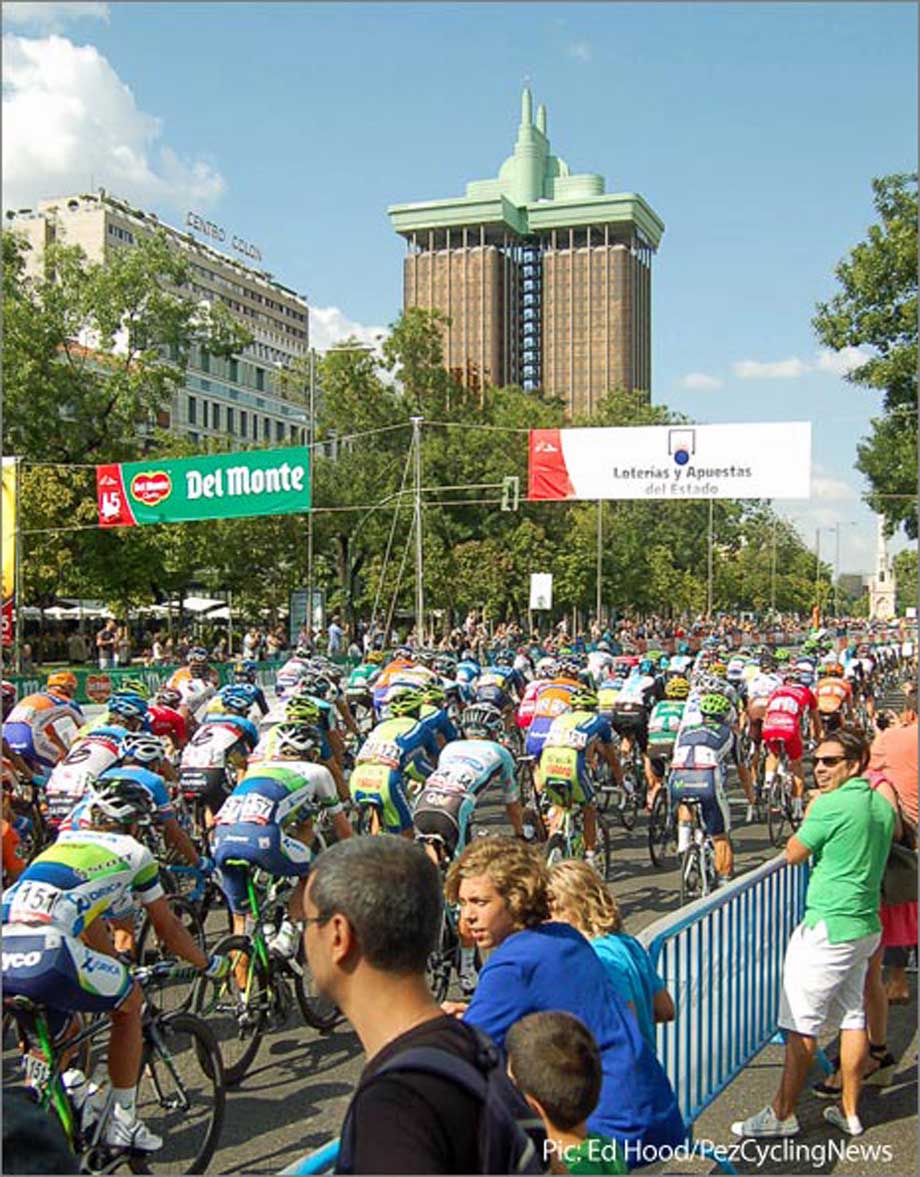 They work hard past the glorious fountains; but we know that it won’t end well – I can’t ever remember anything except a mass charge on these beautiful boulevards. 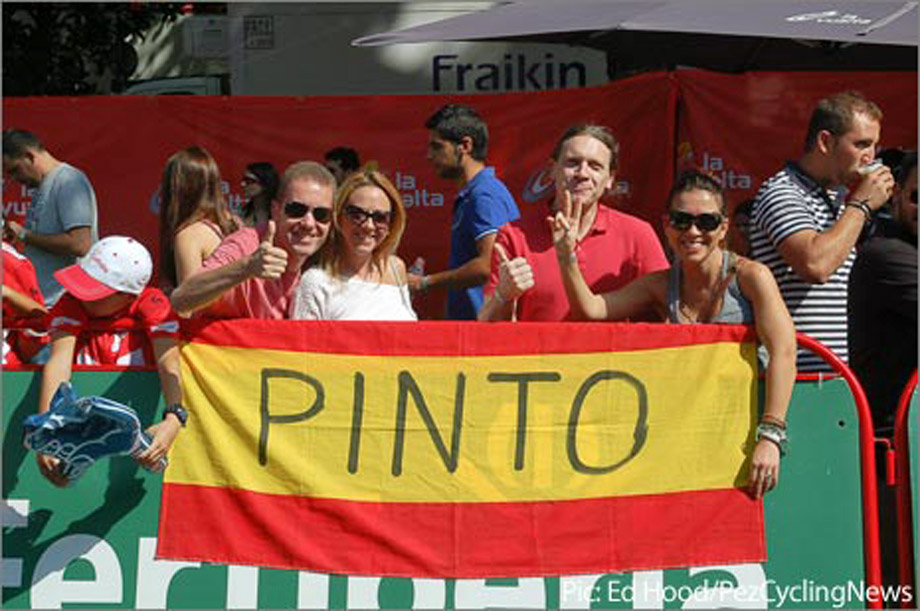 But it’s a good day if you’re an Alberto fan – Pinto is the geographic heart of Spain and not far from Madrid. 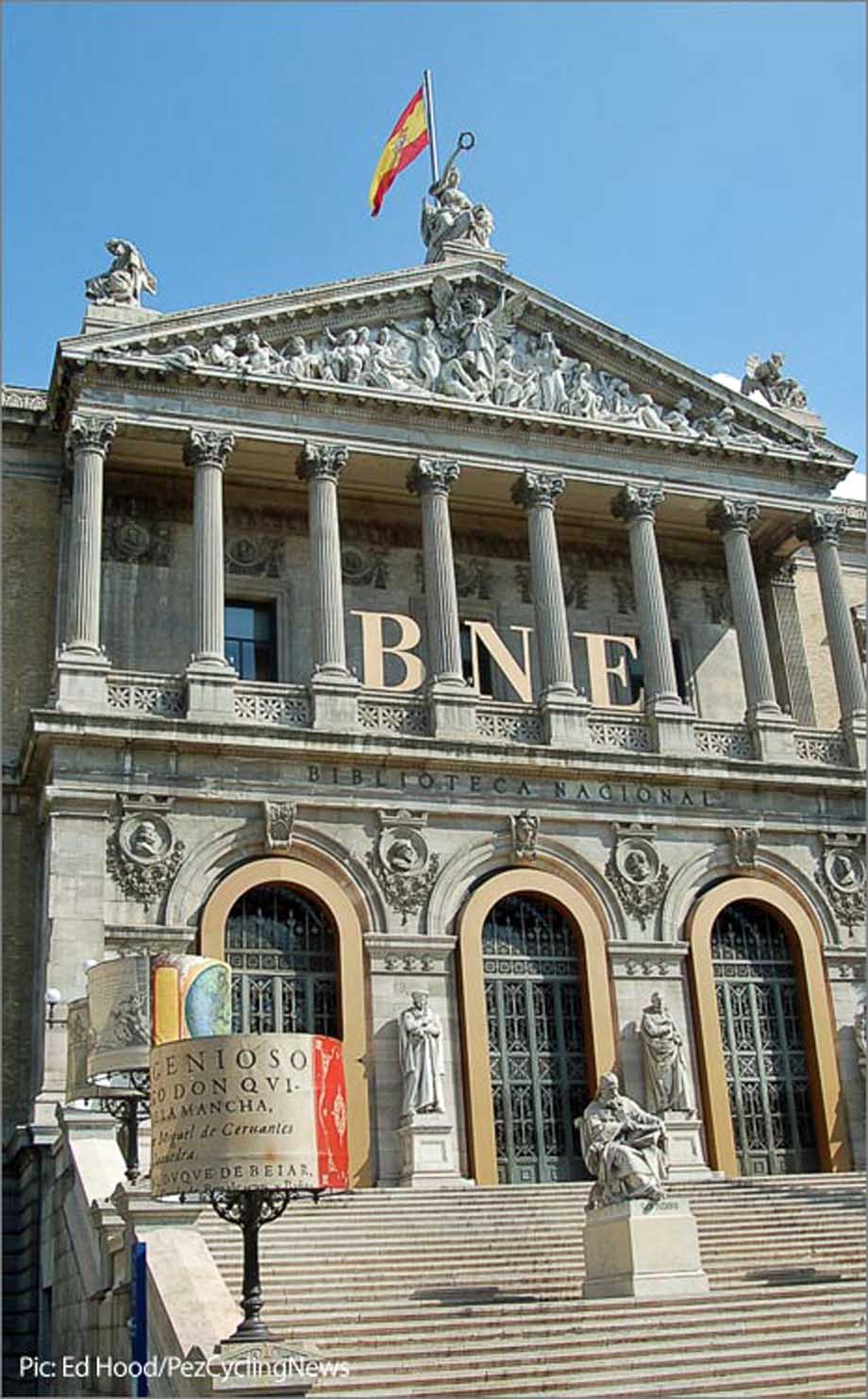 Meanwhile, we check out the National Library where they’re celebrating Cervantes, the man who gave us Don Quixote. 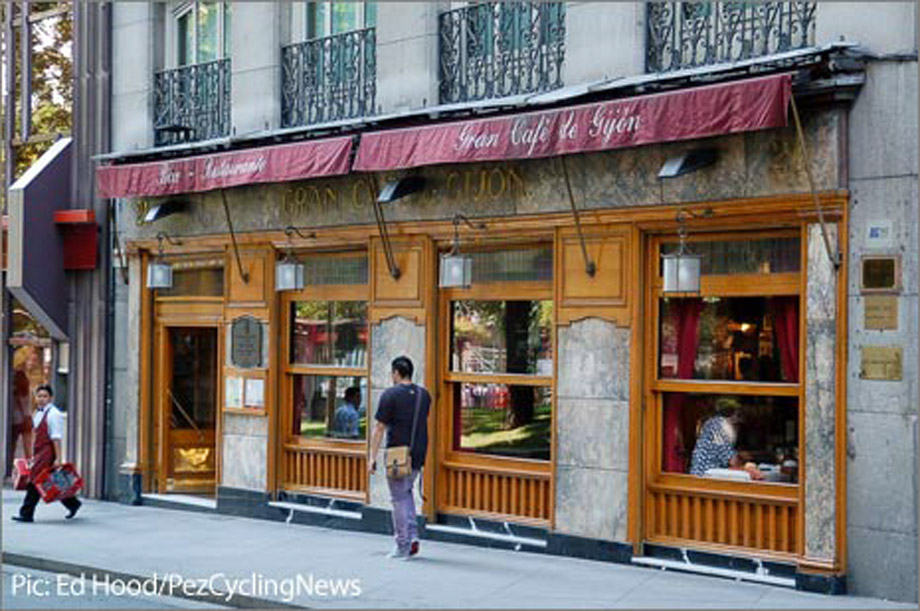 The citizens of Madrid are among the best read in the world – cafe society flourishes, with Cafe Gijon a legendary haunt of poets, writers and artists. 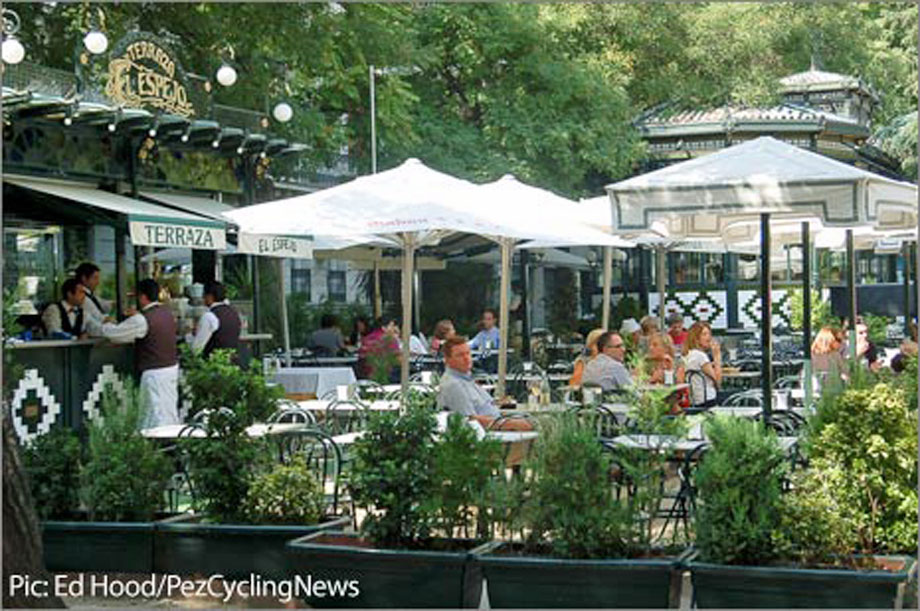 And even the Vuelta 20 metres away can’t tempt some away from their sherry under the shelter of the trees. 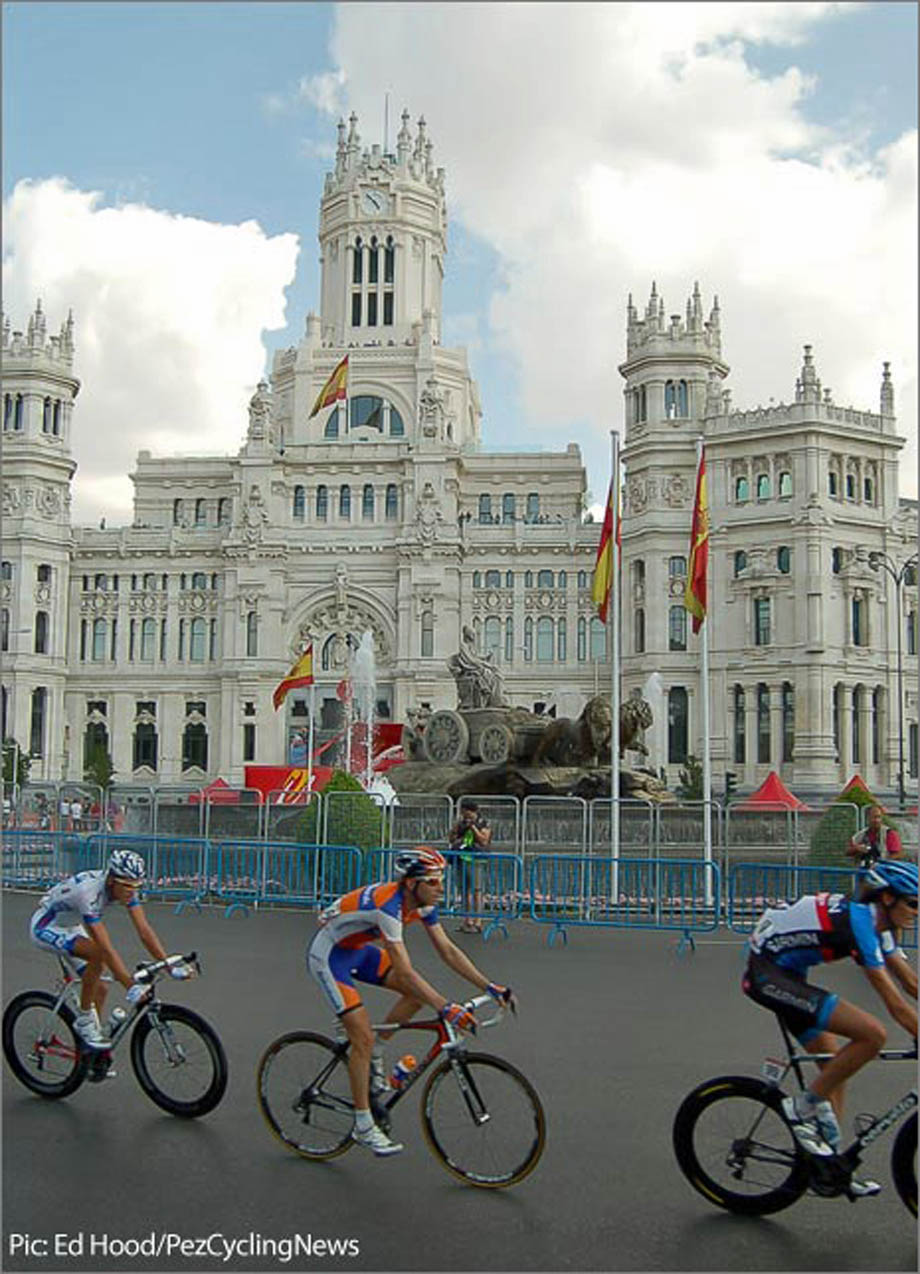 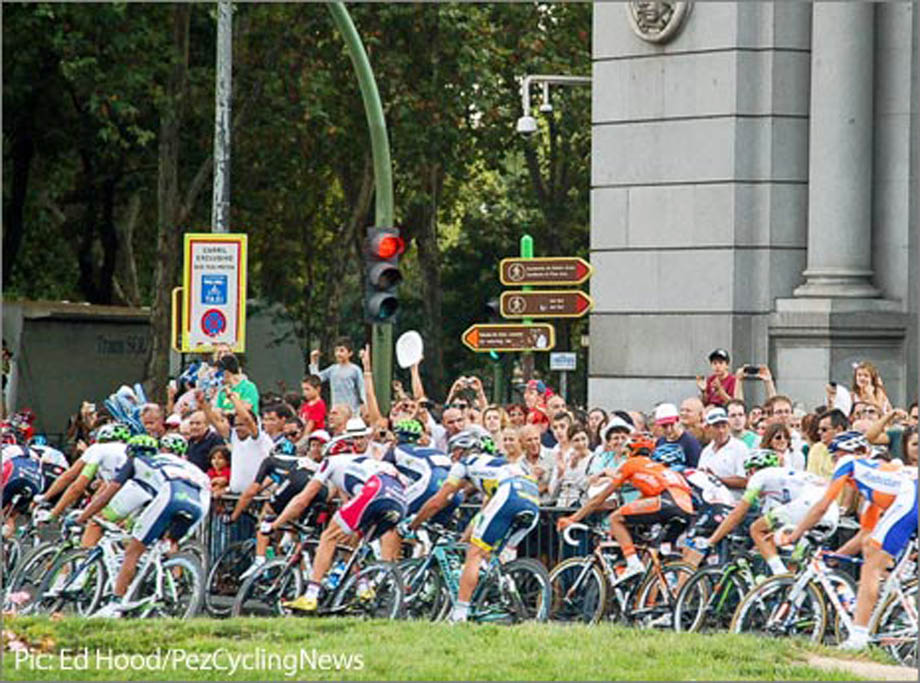 Meanwhile out on the hot tar, the break digs deep as we walk down to the glorious building that used to be the post office in Madrid – a wonderful background for pictures of guys on bikes. 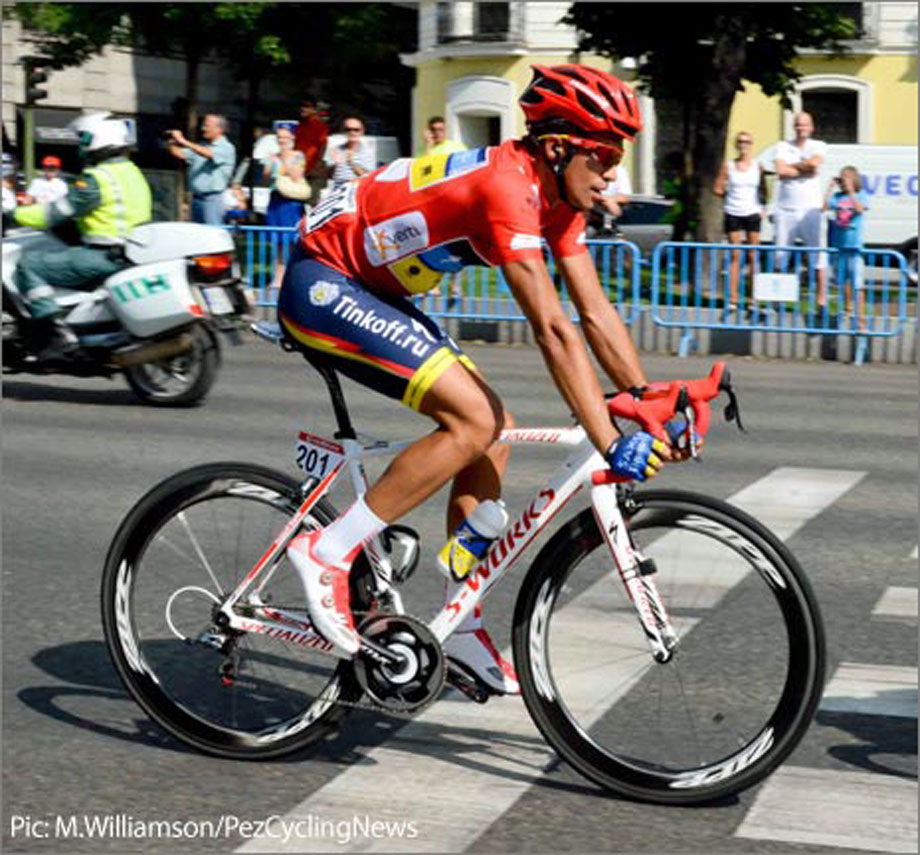 Alberto looks relaxed, and the paint job on the Specialized is understated – we like it. 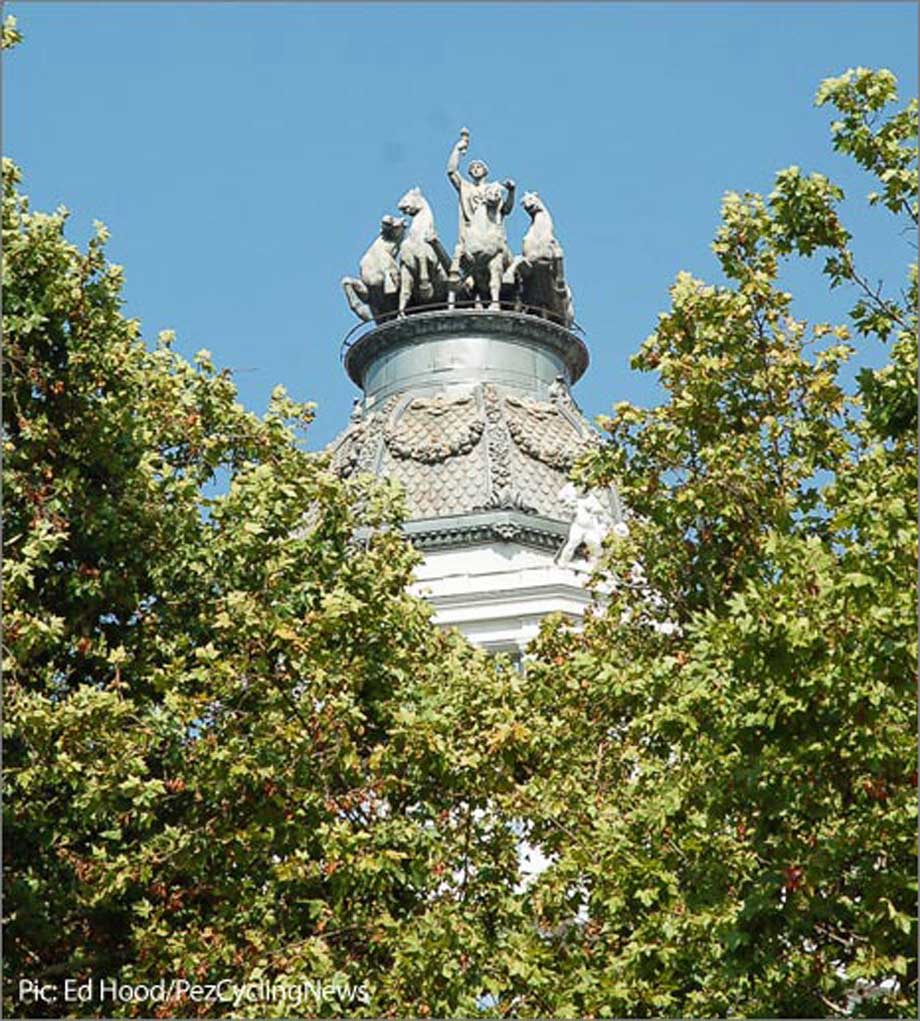 Understated isn’t a word which the noble architects of Madrid employed much – but under the blue, high plains sky and with the fountains, the trees and the heat it all fits in to the grand scheme of this wonderful city. 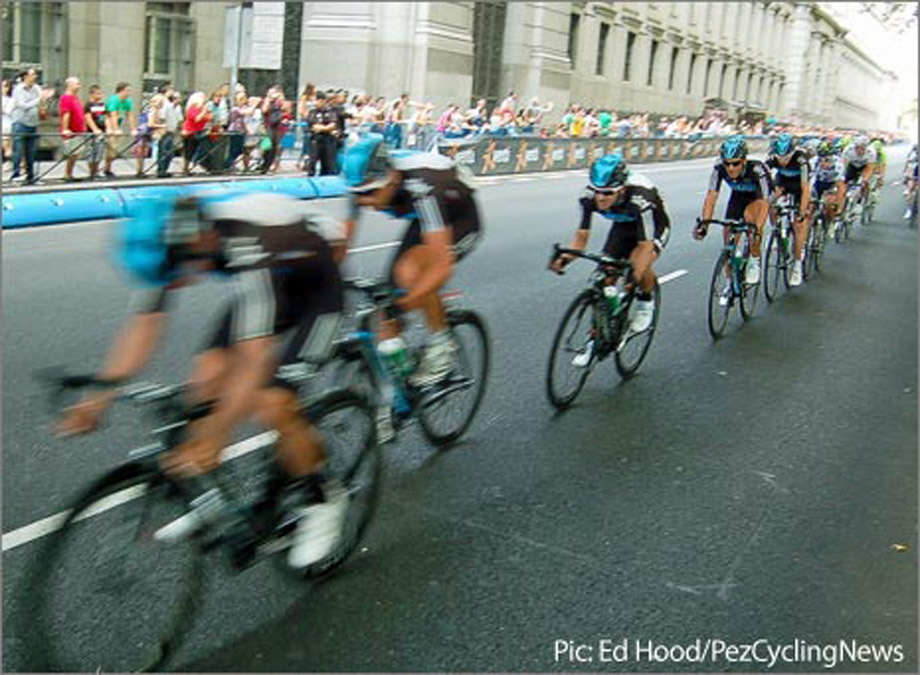 The laps count down towards the ‘ultimo vuelta’ as Sky take to the front. Deep carbon rims ‘clack’ as chains plonk down onto 11 sprockets and the jet wash off the string is refreshing on the skin. The break has gone – it was always doomed. 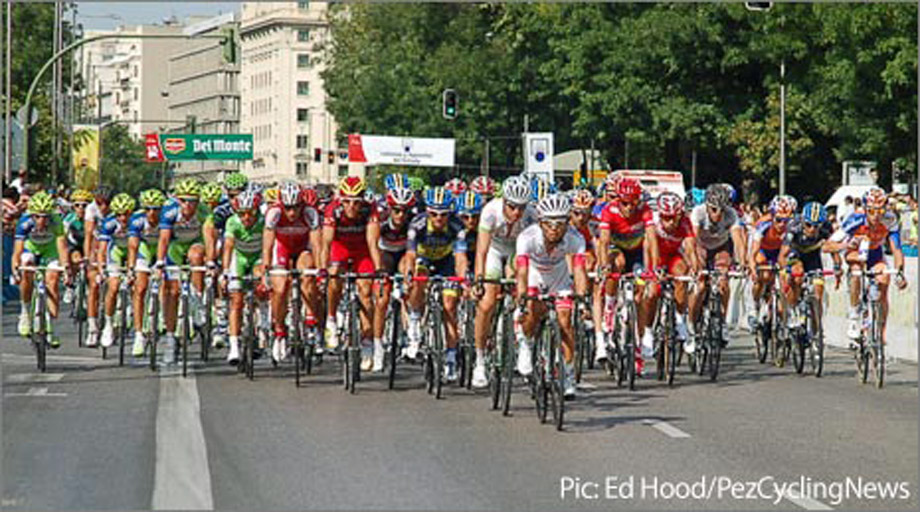 And it’s down to Argos; Degenkolb will still be unhappy that he blew it into Aguilar de Campo where Bennati beat Swift. Liquigas are in there too, for Viviani – and they’re learning the hard way that just like the Champs Elysees, this circuit isn’t flat. 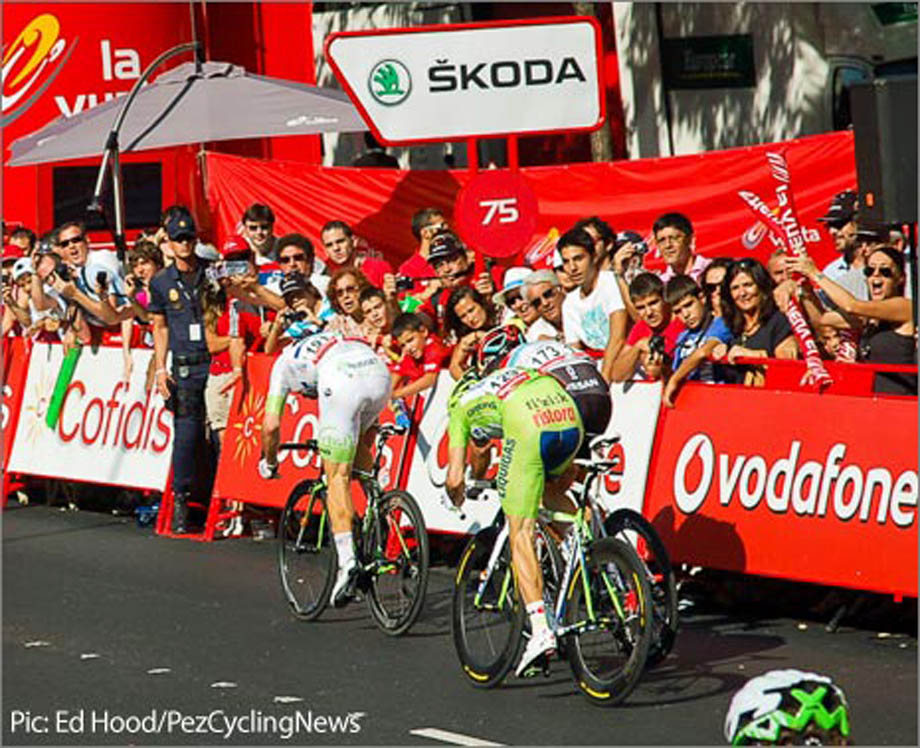 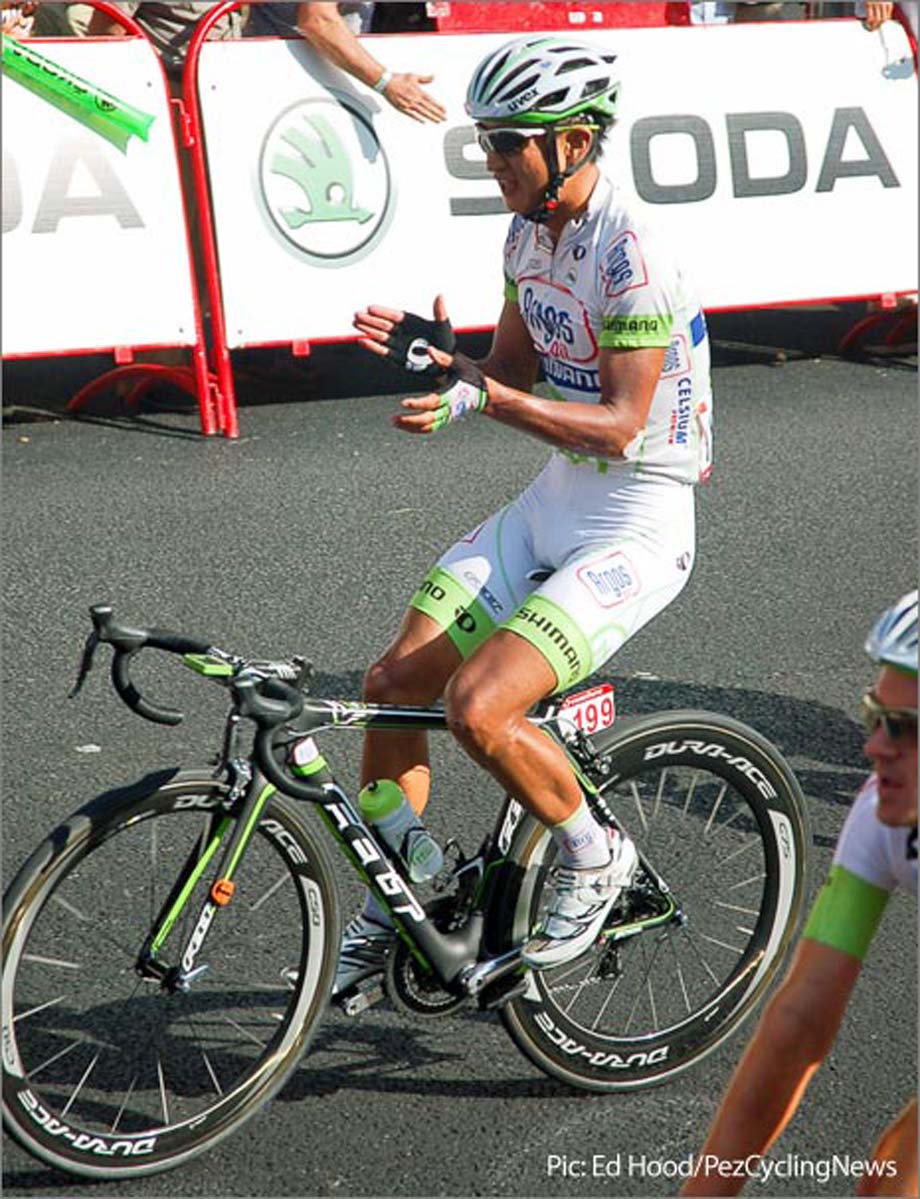 Degenkolb delivers, as behind him team mate Cheng Ji applauds the win – but it’s not just Degenkolb who deserves it, the whole team do. 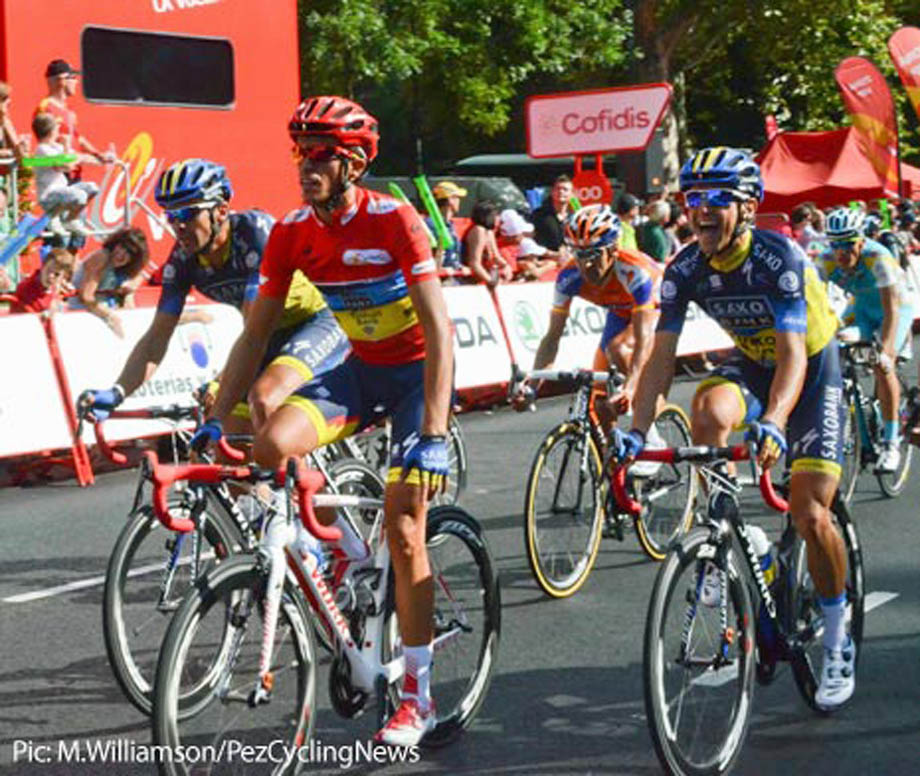 Alberto Contador cruises in – there’s joy, but not a little relief as he takes his second Vuelta. The Saxo-Tinkoff boys smile from ear to ear – all that prize money to share and no tempo to ride, tomorrow. 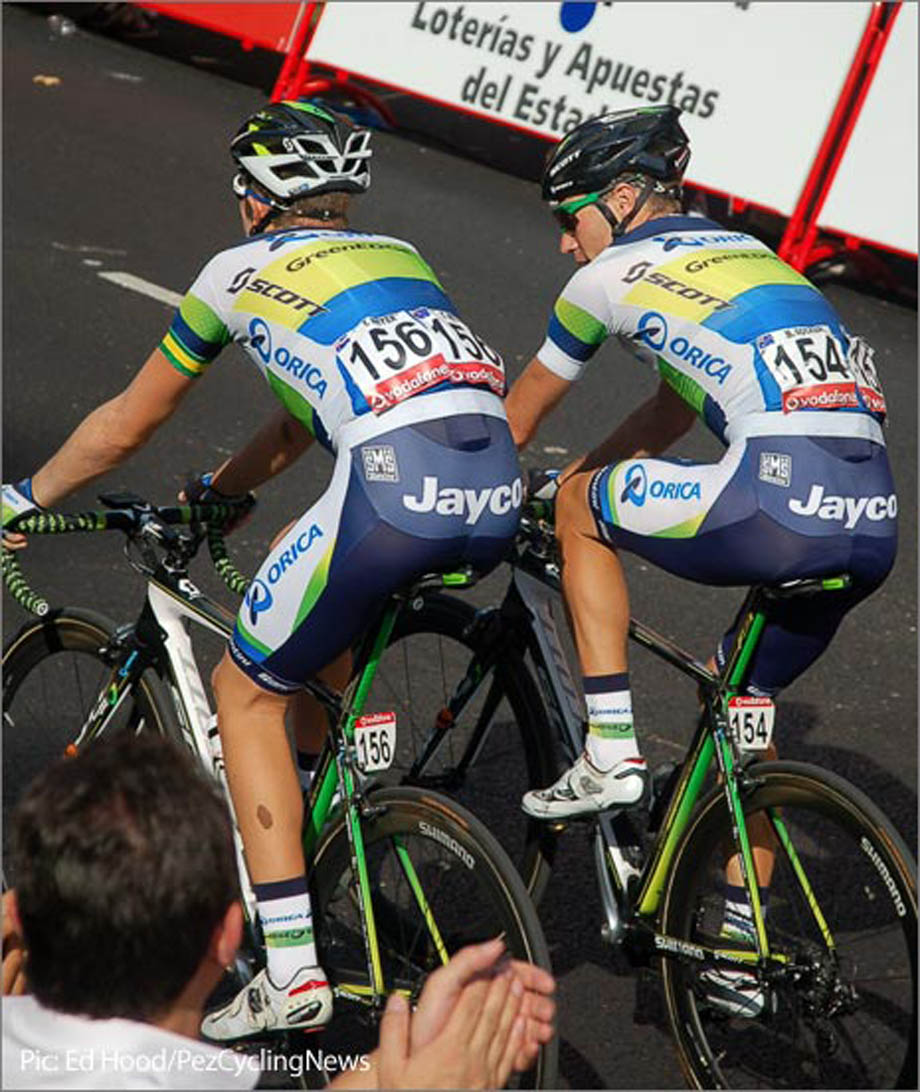 The last men home are Orica-GreenEDGE’s Mitch Docker and Travis Meyer – a good Vuelta for the Aussies, with Simon Clarke’s stage win and King of the Mountains title.