Race Analysis: With the last of the Grand Tours behind us for another year Lee Rodgers takes a look back at the race and analyzes the events, the stages, the crashes and the controversy of Alberto Contador’s win over Chris Froome at the 2014 Vuelta a España.

Even before a bidon was chucked over the spectators’ heads in thirst-crazed desperation, the 2014 Vuelta a España (or The Vuelta, as it’s endearingly known in my part of the world) was dubbed as the most exciting Grand Tour of 2014.

‘The Giro was bereft of top riders!’ shouted those naysayers with a decent enough command of the English language to use the word ‘bereft’.

‘The Tour was boring, it suffered from the withdrawals of Contador and Froome! Nibali wouldn’t have won otherwise…’ clamoured others who wouldn’t know relatively dope-free road racing if it came up and dropped them on a local col.

The Vuelta was supposed to promise a humdinging three-way battle between Alberto Contador, Chris Froome and Nairo Quintana but it never quite worked out that way. Despite the fact that Contador finished only 1:10 over Froome and within 2 minutes over Alejandro Valverde, the race felt like little more than a procession once the Tinkoff rider had taken command of the race after a remarkable time trial effort on Stage 10. 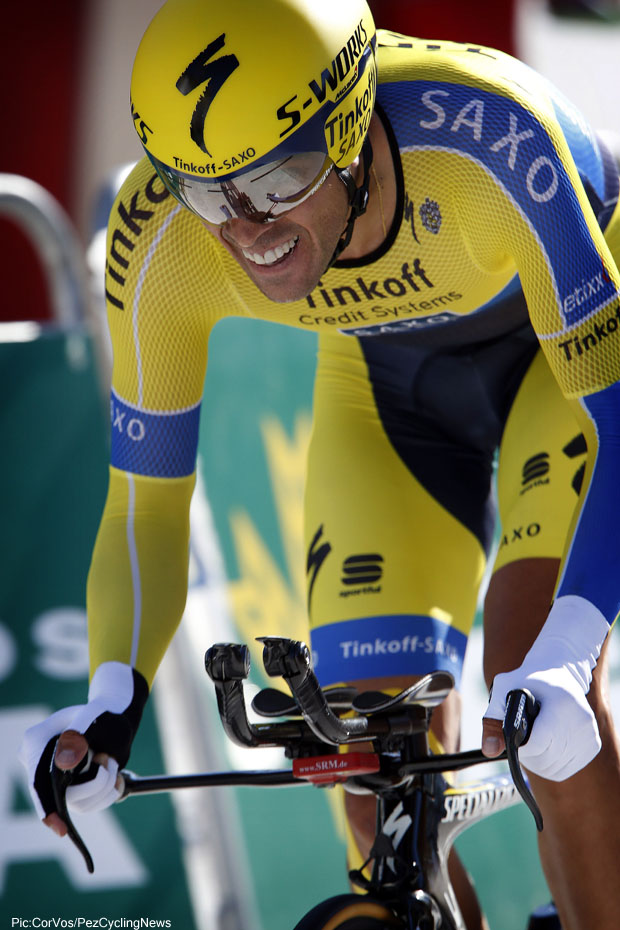 That stage was noteworthy for several reasons, not least being the cartwheeling dismount of Nairo Quintana from his bike at high speed on a rather innocuous looking corner. The Colombian’s pfaffing about with his shoes cost him the race lead and with it, possibly, the race. 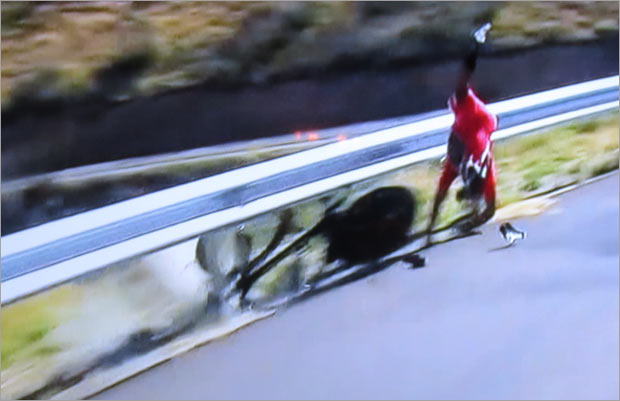 We’ve all crashed, all of us who ride bikes, I’m sure, and we may have crashed at important times in races, but imagine crashing out in a manner like that, caused by yourself, whilst leading one of the biggest stage races in the world.

“I’m screwed,” he said at the end of the day of Stage 10, after resigning himself to helping out teammate Valverde for the rest of the race. Losing over 4 minutes will do that to you.

Yes he has a Maglia Rosa to console him and we can be sure he’s got the talent for a shot at the Maillot Jaune, but still. That will come back to him from time to time and he’ll have nothing left to reply with but a rueful shake of the head.

In any case Valverde didn’t need his help and it was just as well, for the diminutive Colombian crashed out for good the very next day early on in the stage. People often put these things down to a run of bad luck but there’s often more to it than that. No doubt the crash on Stage 10 had been on Quintana’s mind all evening and into the morning of Stage 11, and it could well have contributed to a lack of concentration on his part. This is not to say he caused the crash but he may have been in the wrong place at the right time.

I’ve mentioned this before but it’s worth mentioning again, just how seldom the really consistent riders through history were the victims of crashes or mechanicals. He may never have actually won the Tour but Lance Armstrong was a great example of a focused rider, never losing a Tour because of a flat or a crash.

Focused to the point of sociopathic, perhaps, but focused nonetheless!

Bertie’s ride in the Stage 10 TT was remarkable. It was, in fact, like the Contador of old. What amazed many was that he had just returned from a broken leg. However, the break may have been ‘just’ a crack, which heals quicker. As well as that, you’d be foolish to put it past Oleg Tinkov to instruct his media guys to spin the tale that Contador’s break was bad and then to secretly send him out training.

Contador’s whole Vuelta was remarkable actually. He waited on Froome’s wheel til the moment was right then struck out like a cobra to secure a handful of seconds over the Briton. It was this tactic that meant that the final GC looked far closer than it actually was, and it was this, along with Froome’s robotic riding, that meant the race for the GC was all twist and no shout. 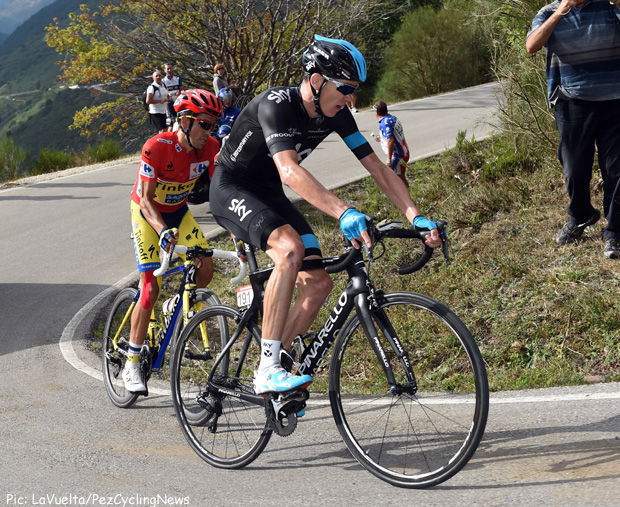 Froome rides to the numbers but there has to come a time to take that console off and to shove it in the back pocket and just ride the damn bike. How about a mad, barnstorming 100km solo break a la Hinault? How about some recognition that he was just not going to beat Conty in the hills, and so why not throw out the Sky How To Win A Grand Tour cookbook and go for something completely new, comething mad? Yes, I am asking too much and I know it but it was because these two were not at the Tour that it was such a good race to watch, because the way they ride just doesn’t do it for many spectators.

Anyone that has read the official report into Contador and his Clenbuterol will know that he should have been banned back in 2010 for 2 years for inexplicable reticulocyte levels which suggested blood doping and/or EPO use. Michael Ashenden, the former UCI doping panel expert, said as much when interviewed by Andy Shen in April 2014.

“The inescapable conclusion was that his reticulocyte results were unusual for him. In fact, neither his own blood expert nor myself could conceive of any naturally-induced circumstance that could explain his elevated reticulocyte results during the Tour. I was surprised to read paragraph 359 of the ruling, which in fairness only refers to written submissions that had preceded my opportunity to address questions to Contador’s expert. However what that paragraph does not reflect, which the court transcript can establish, was that during the hearing itself I categorically asked Contador’s expert whether he had any natural explanation for Contador’s reticulocytes during the 2010 Tour, and he did not. Both of us also agreed that some forms of doping, for example a microdose EPO regime, could yield higher-than-expected reticulocytes.”

Seeing him riding away with the Vuelta just doesn’t sit right.

This is obviously not necessarily the view of PEZ but it is mine, and I stick by it.

Another crash caused a rather amusing incident on the chat forums, and it was the peculiar movements of Ryder Hesjedal’s bike after he went down on Stage 7.

It was not just the usual nutjobs on the case either. No, even the professional French nutjobs at L’Equipe got on the bandwagon too, asking just how the Canadian’s back wheel could propel the bike in such a way after it seemed to have come to rest on the tarmac.

Garmin-Sharp’s sports director Bingen Fernandez later said that the UCI had dropped by to examine the team bikes.

“Apparently they got a lot of messages from the public, so they had to come and investigate,” Fernandez said.

“They came this morning and said that they had to look at the bikes. I think they were almost embarrassed, but they came along and had a look anyway.”

If ever a World Tour rider is found on a motorized bike in a race I think we can then all agree that it will be time to pull the plug. In any case, there are far odder things going on in pro cycling than motorized bikes, like, riders still getting caught for EPO use. Amazingly, three cases came up this week, one involving Astana rider Valentin Iglinsky.

I’m not amazed that guys are using EPO, just that they are getting caught. Time for a better doctor, fellas. Where’s a Ferrari when you need one, eh?

Back to the Vuelta, it was interesting but not surprising to see Froome not bothering to go for it on the last TT. Contador rolled in 1:40 down on the winner, meaning that had Froome got a very similar time to the winner, he’d have won. I guess he thought Conty would be going for it a little harder and he wanted to secure 2nd, but, again, why not just hammer it? Just in case?

It just seemed to sum up this Vuelta for me, Froome’s ride – lots of bluff and very little bluster. 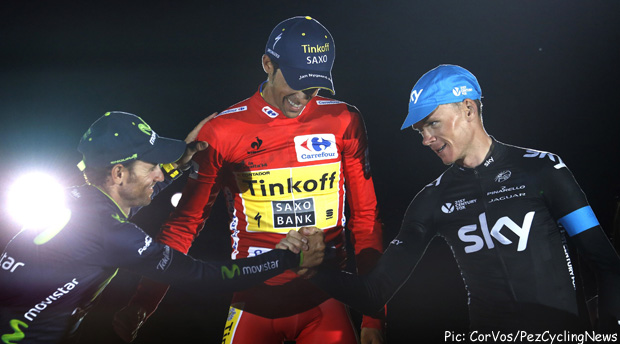