Vuelta Roadside: Our man in Spain, Alastair Hamilton, had the excitement of following a rider in the time trial stage 19 down the Costa Blanca to the rock of Calpe. Chris Froome rode out of his skin for the stage win and get a bit closer to race leader Nairo Quintana, and PEZ was there to take it all in.

The time trial, the race of truth, the race against the clock or in Spanish ‘contrarreloj’. Stage 19 might be the most important stage of the 2016 Vuelta a España, depending on what happens on Sunday’s climb of the Alto de Aitana, that is.

The plan for the time trial stage was to get to the start town of Javea early, take some photos of the start, including riders/bikes/fans, follow a rider on the course and then enjoy the finish in Calpe. Sounds easy enough and in the end it was… surprisingly. 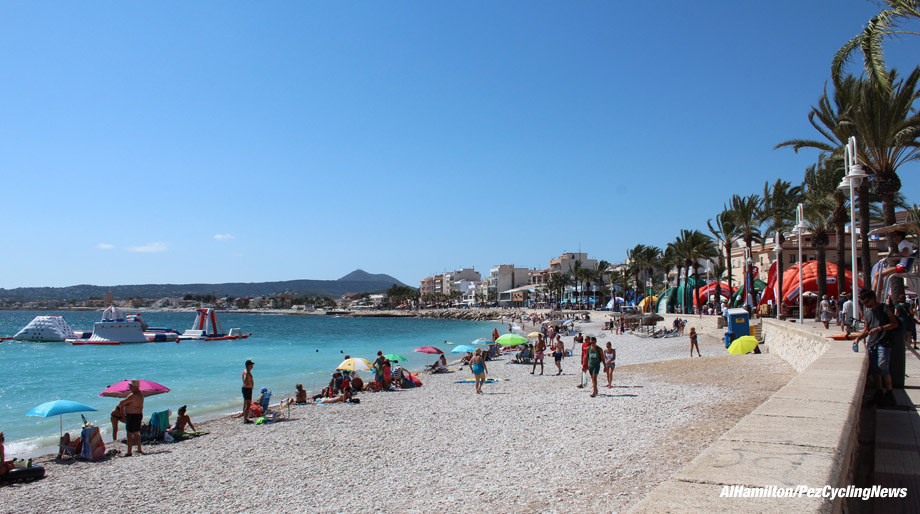 Javea (or Xàbia in Valenciano) is much like the other villages on the Mediterranean coast, one time fishing village turned tourist resort. Of course the King of them all is Benidorm where stage 20 starts, think of Las Vegas with a beach and you nearly have it. Javea is still nice and hasn’t lost (all of) its village charm and has some nice beaches. Anyway, I’m getting off the point. First the team trucks needed a visit. 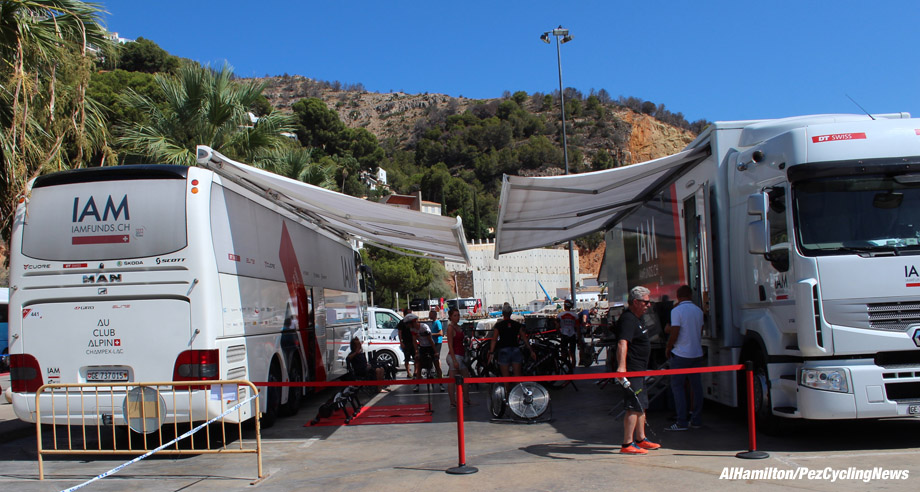 The IAM Cycling team had a good system with their bus and truck giving a nice big area in the shade. 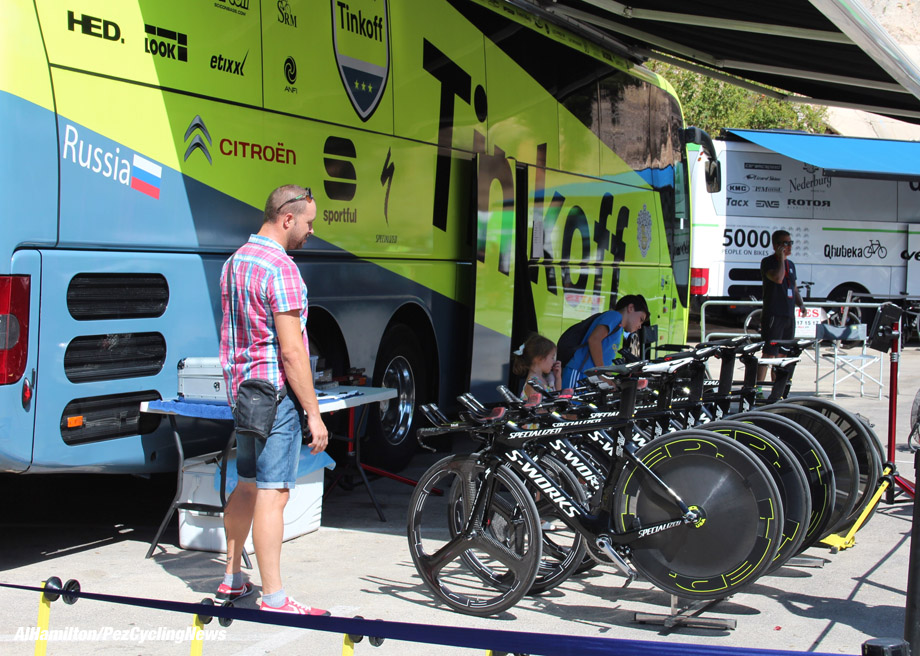 Those Tinkoff Specialized bikes looked to have big chain wheels. This will probably be the last time Alberto Contador will be riding his TT S-Works Shiv, Trek soon. 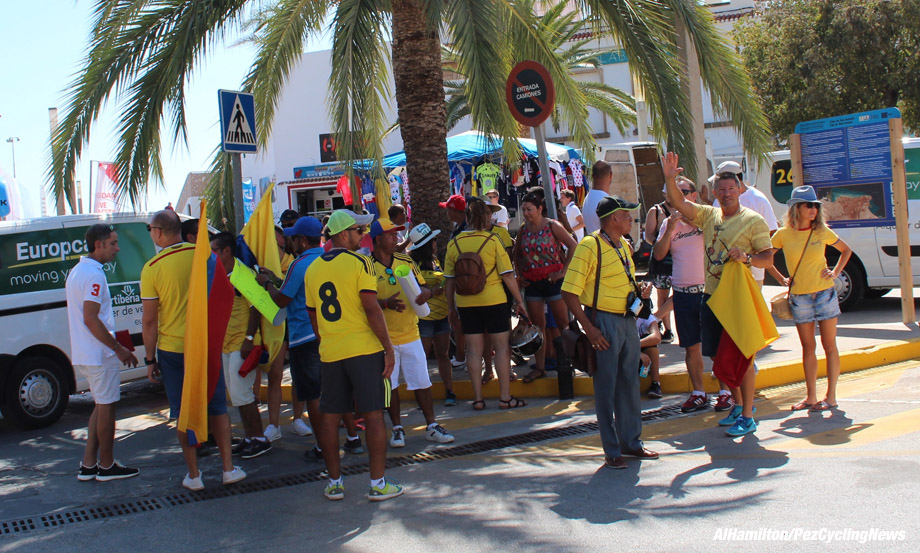 The Colombians were out in force, the group at the trucks wanted to see Nairo Quintana and had a good shout at nay other riders, but it was all in good fun. They like there photos taken and also want ‘selfies’ with everyone. They really do liven up cycling. 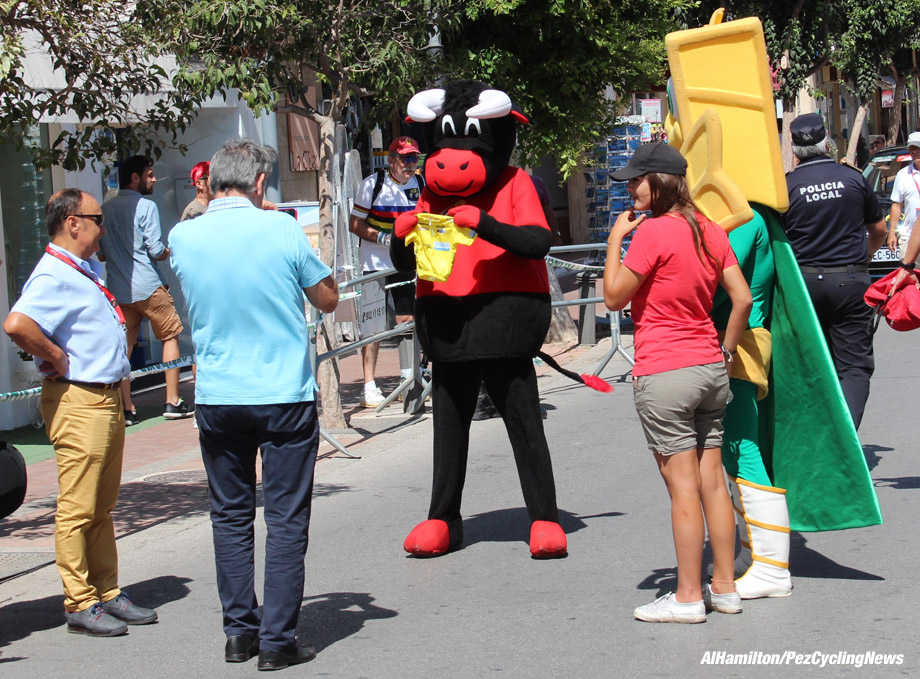 Waiting for the start ceremony and the first rider there was a lot going on. The Vuelta bull and the Caja Rural logo were entertaining as usual, more ‘selfies’. 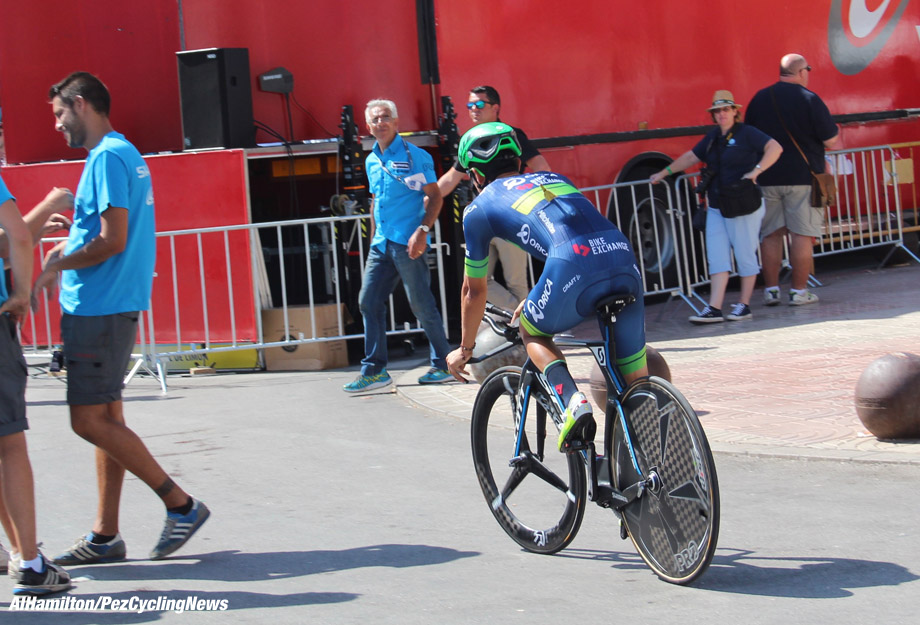 Esteban Chaves was going for a warm-up and as always he had a banana in his back pocket, it must be his thing as I’ve spotted it most pre-stage starts. 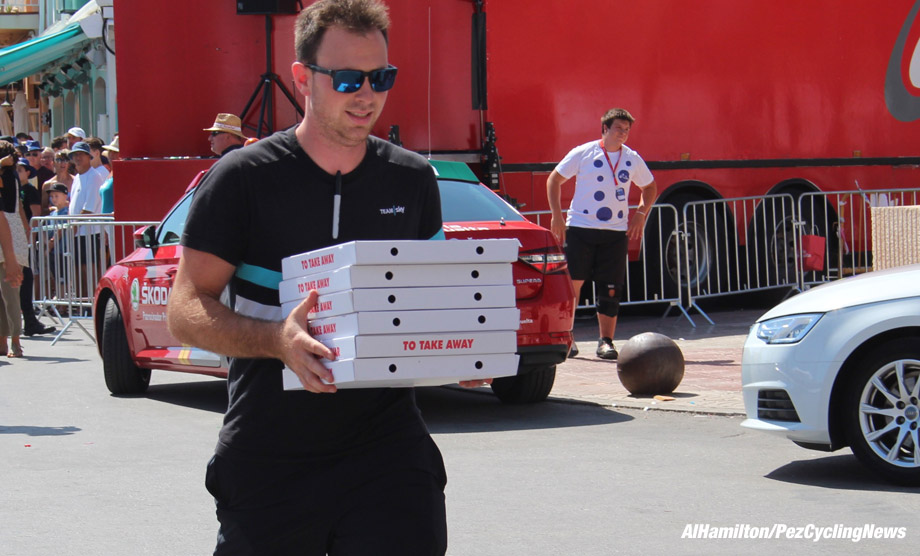 Not eating quite so healthily was the Sky team, two batches of pizza, ten in total. Is this the Froome secret? 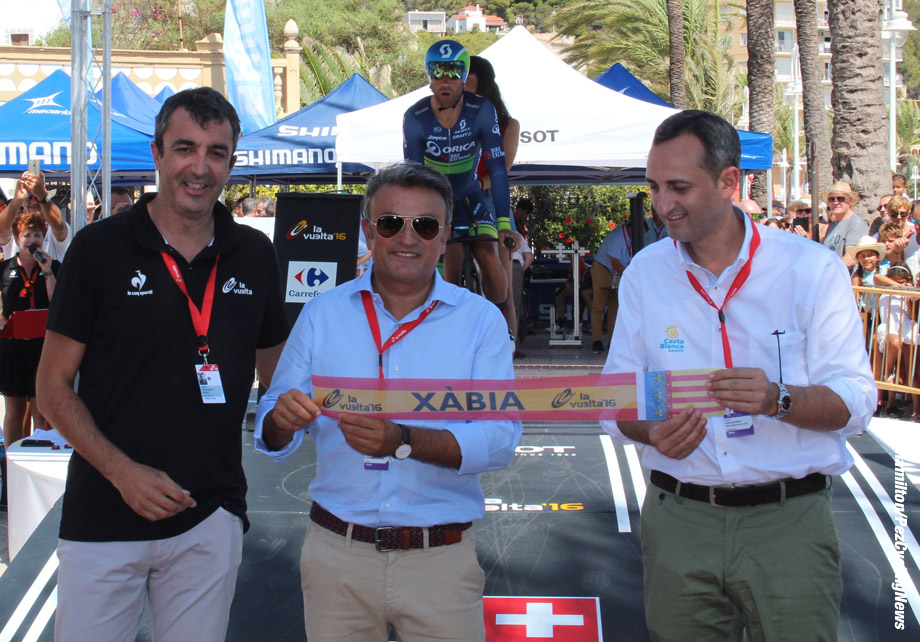 Start time, but first the mayor of Javea and Vuelta director, Javier Guillén, had to cut the start tape. First man off was Canadian, Svein Tuft of Orica-BikeExchange, he had to watch as his start was delayed for the ‘formalities’. 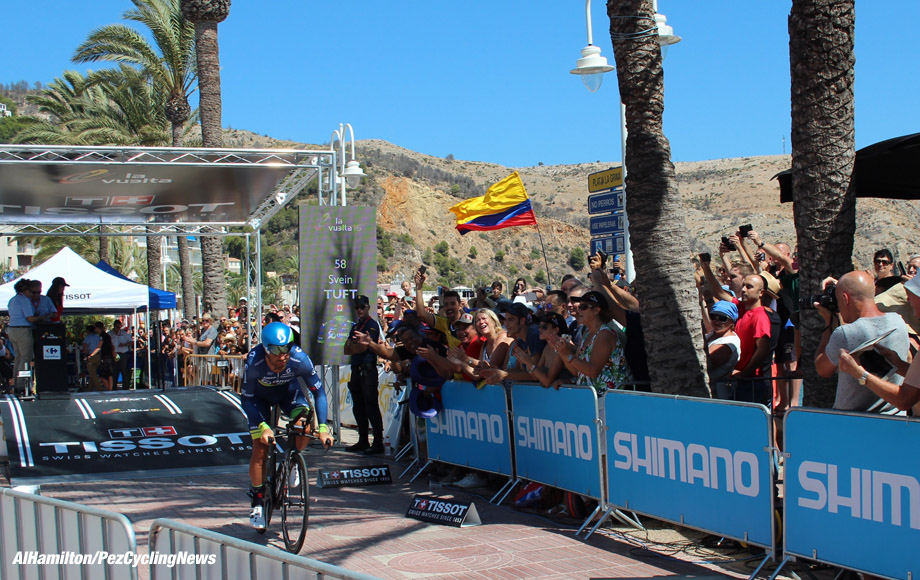 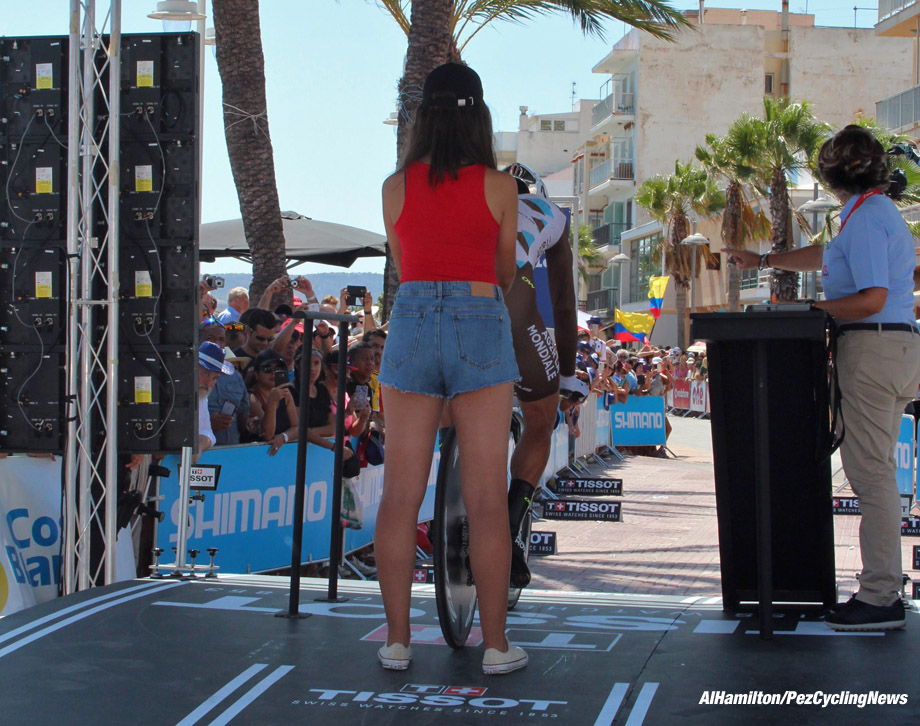 Third man down the ramp was AG2R-La Mondiale’s Christophe Riblon, at 4:28:05 down, his ride wasn’t going to be too important, but he did finish in 44th place at 4:20, so he didn’t coast round.

I can’t say the same for the rider I eventually followed; David Arroyo of Caja Rural-Seguros RGA, finished 137th at 8:40. 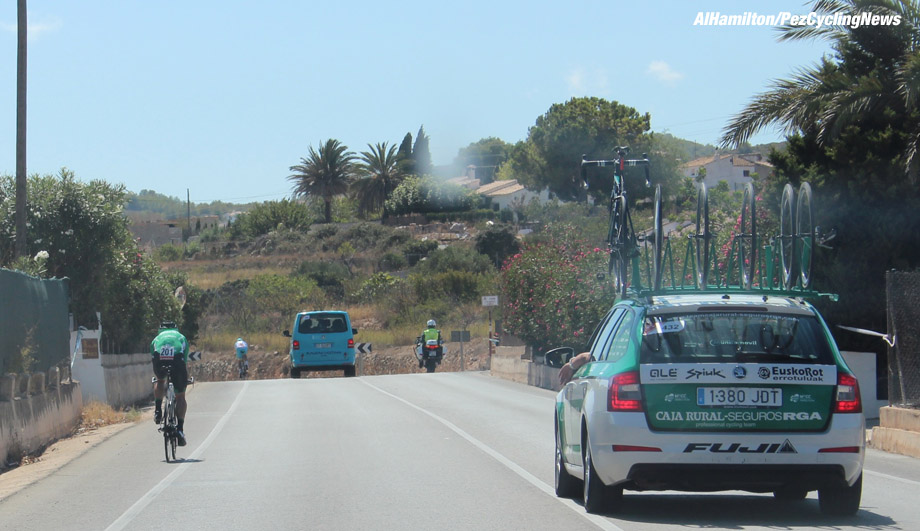 All was going well until he was caught and passed by Astana’s Dmitriy Gruzdev. 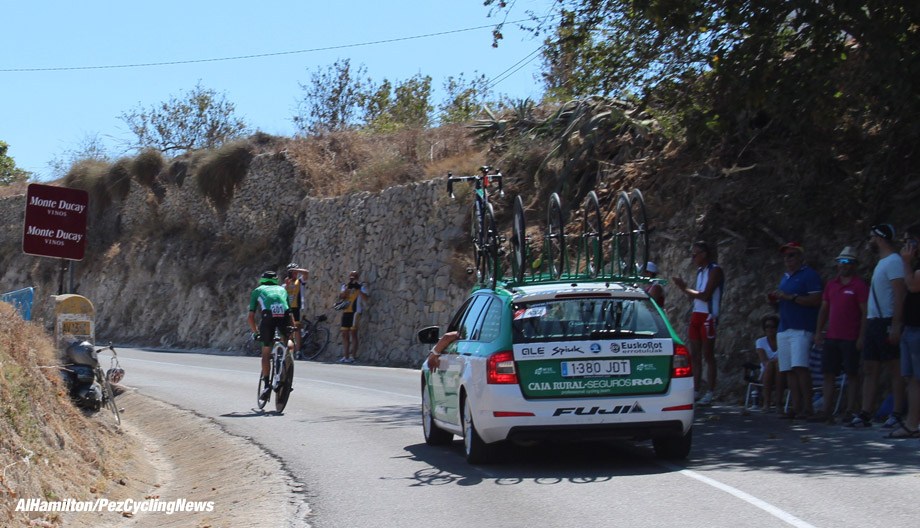 He looked good on the climb. 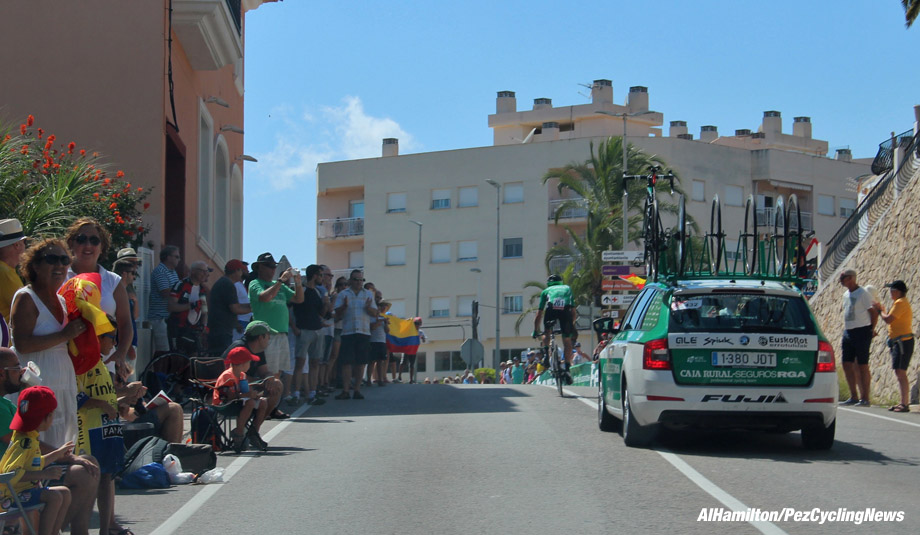 But wasn’t long after the descent that I saw the Sky and Etixx – Quick-step team cars in my mirror. Michal Golas and then Yves Lampaert came past. 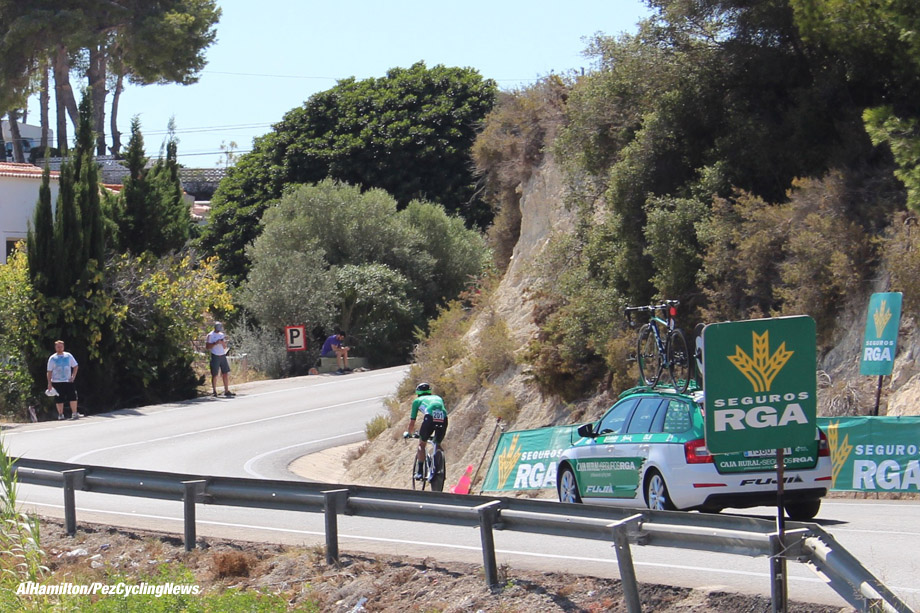 From then on we could enjoy the coastal view. 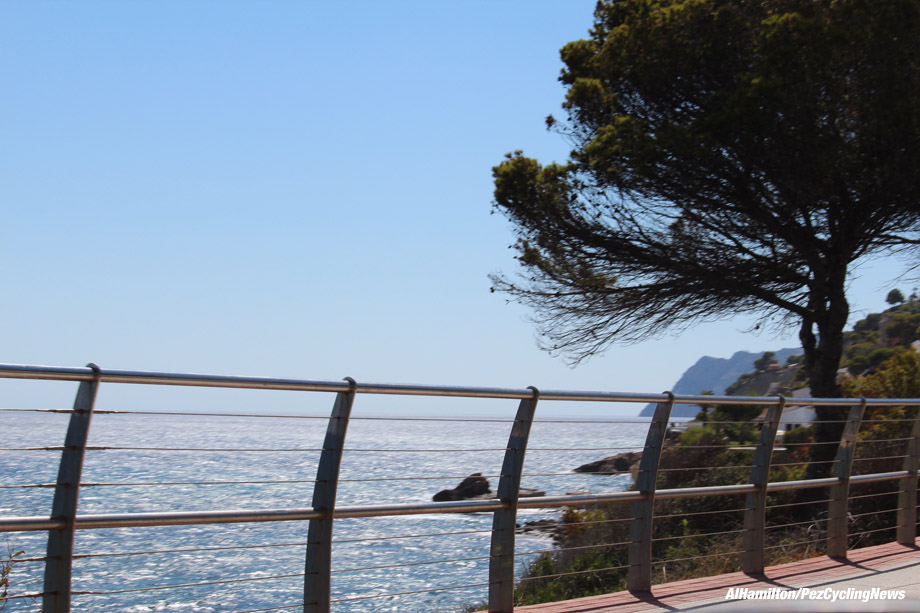 Coming into the finish and the fans were deep at the barriers. 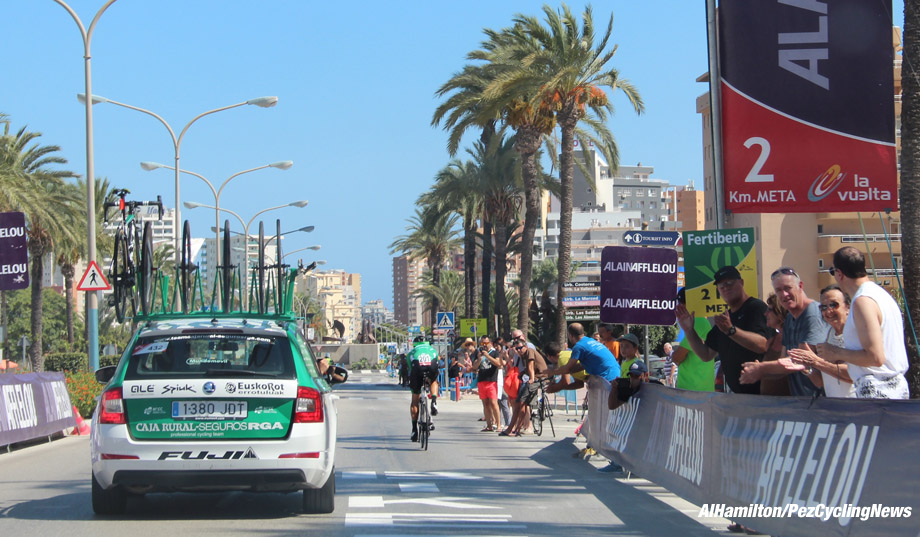 There were many point to see the final kilometer, but where I had to park looked down on the race as it made its way to the port. 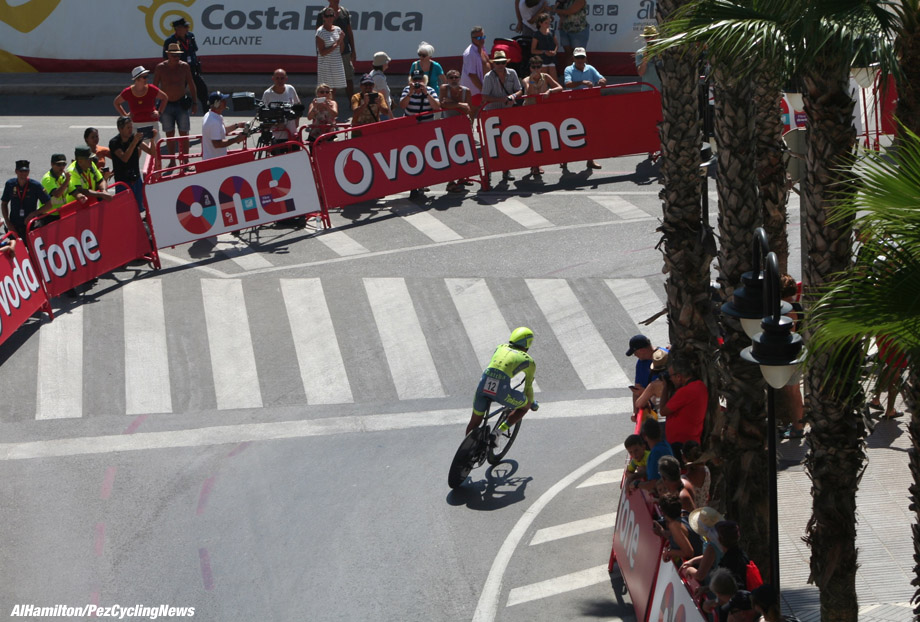 Young Hugh Carty had also just finished. Not a great first Grand Tour, but you have to start somewhere. 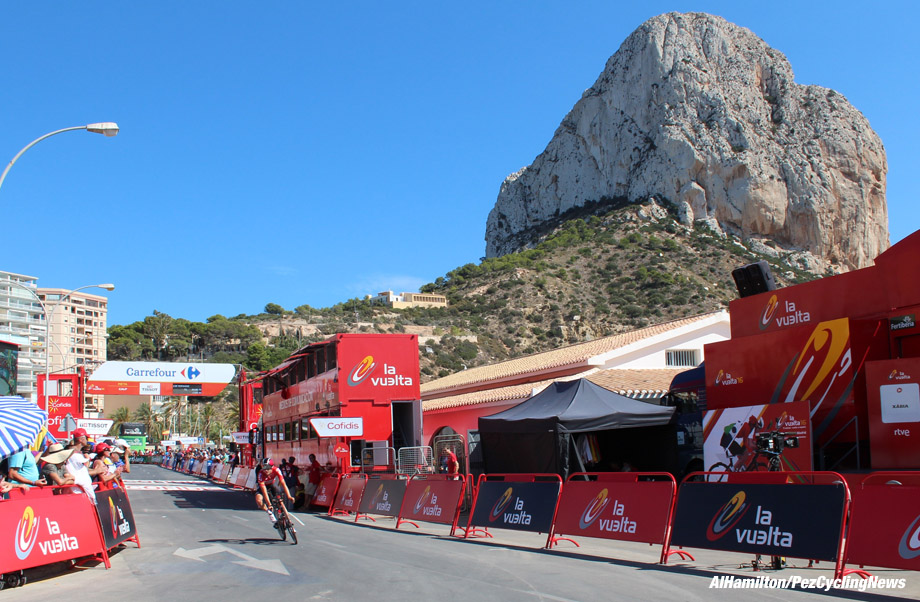 The finish was one of the nicest… at first until I realized there was no shade and my tomato head from Wednesday didn’t need any more sun, even with a hat. I had around an hour before the top GC men started to finish, so the finish line press room with its TV, aircon and fridge full of water had to be found. 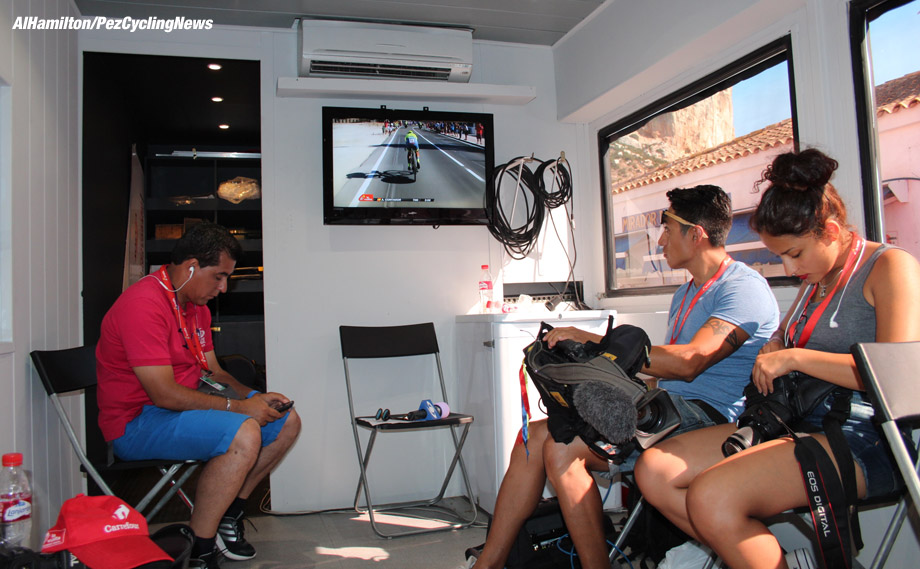 This is where I met my new Colombian friends form a TV station that was covering the Vuelta. They were big Nairo Quintana fans (as you would expect), but they were in touch with reality. The rightly predicted the Chris Froome would win the stage and the top three on GC would be Quintana, Froome and Contador. They didn’t have much confidence in their countryman Esteban Chaves’ time trial skill. 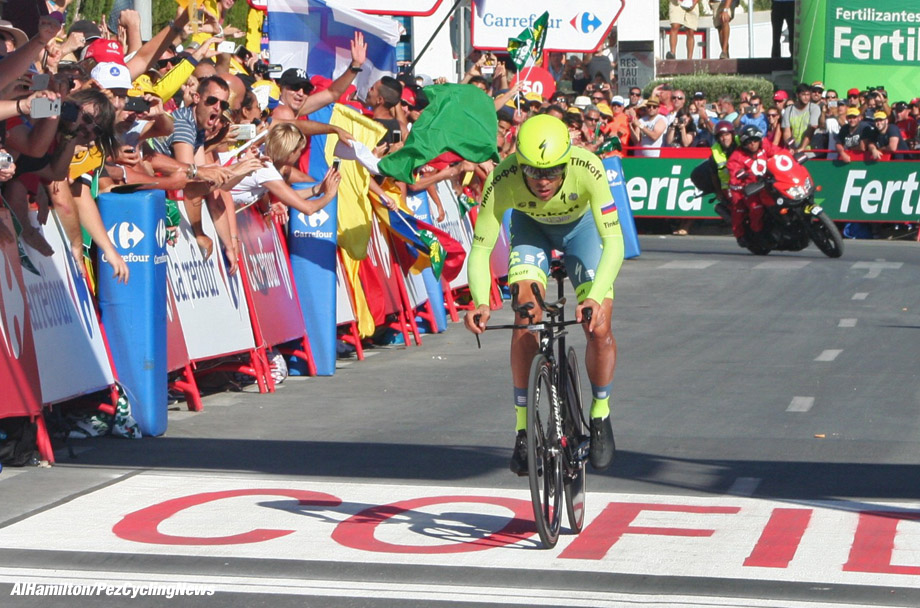 Time to brave the sun and watch the top men come home. Alberto Contador had done enough to take the 3rd step on the Vuelta podium. 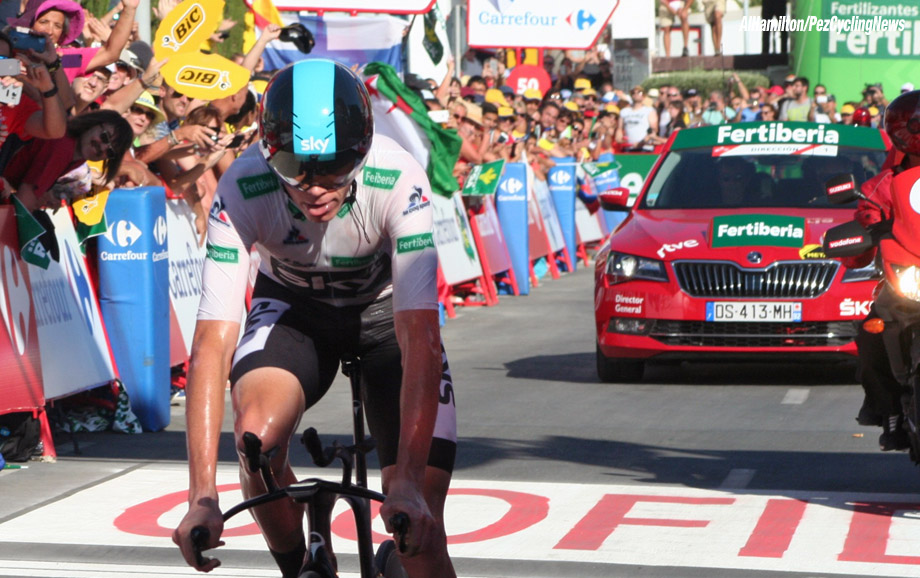 Next in was Chris Froome, he had caught Chaves on his way to the fastest time and move to 1:21 down on Quintana. 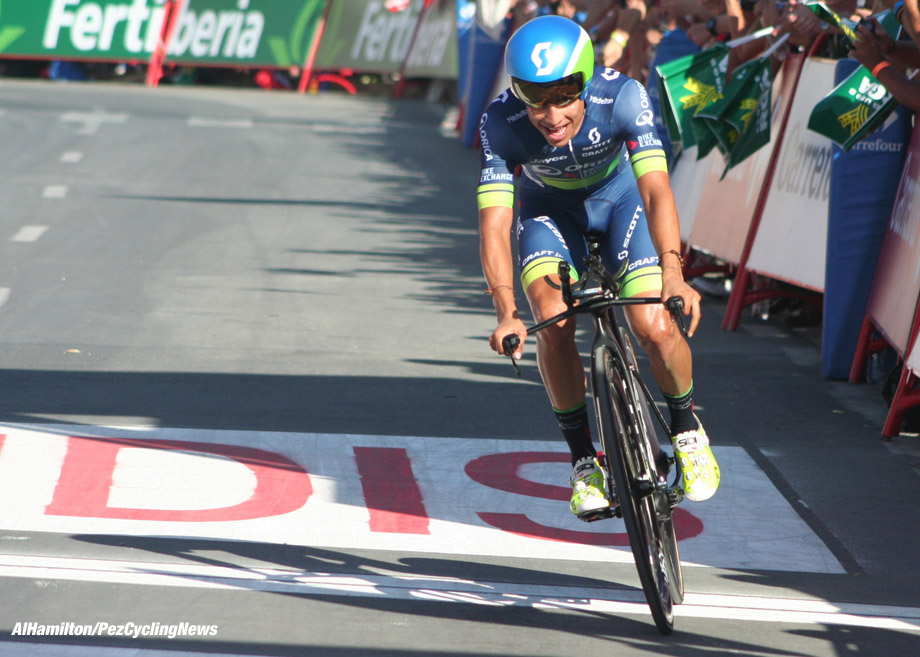 Esteban Chaves had given his best, but dropped to 4th. 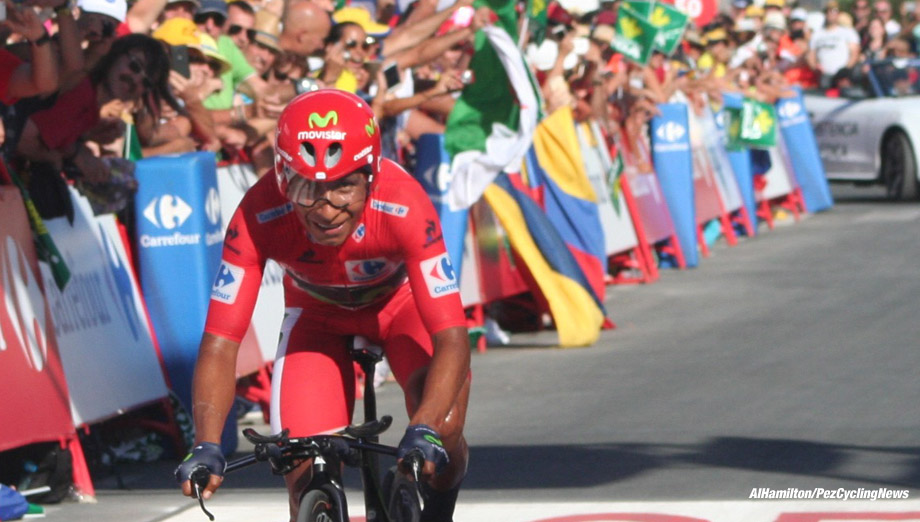 Then to a big cheer from the South American contingent, Nairo Quintana crossed the line to hold his red jersey into the final mountain stage. 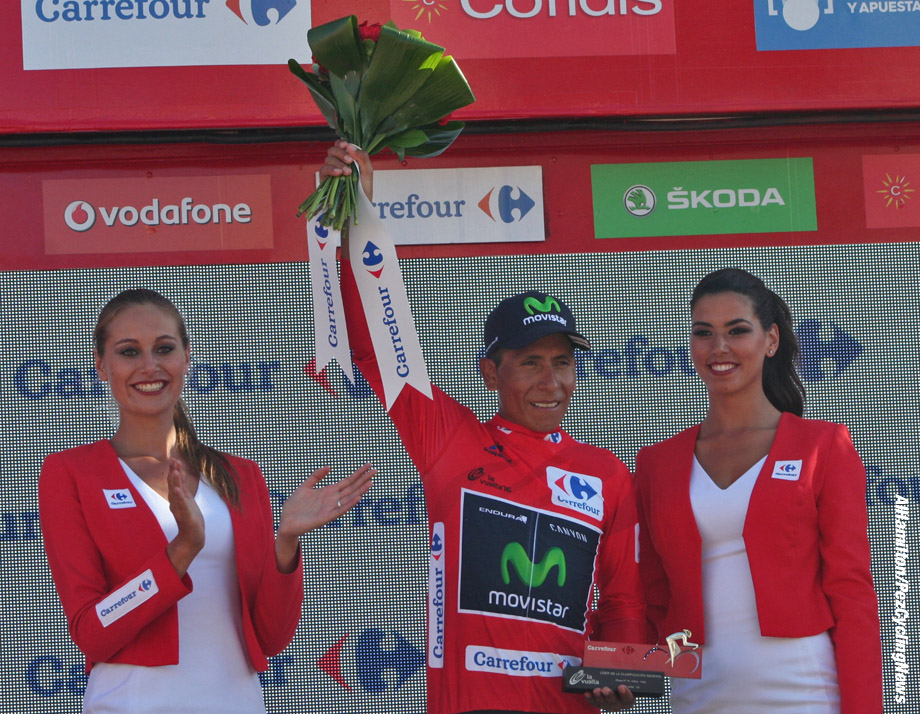 And the fans went wild! 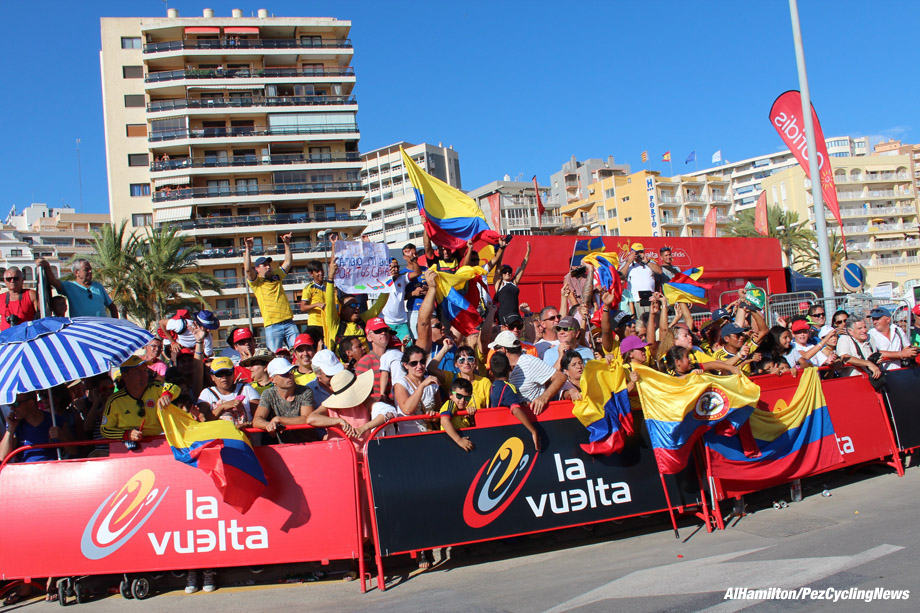