Best of 2016 Vuelta Roadside: The 2016 Vuelta a España is in the Comunidad Valenciana and so we had to send our ‘local’ to see what was going on. This will be Alastair Hamilton’s 15th Spanish Grand Tour and it sounds like he has not lost any love for the race in the sun.

Dehydration, sunburn, traffic jams and late nights all sum up the Vuelta a España, but I wouldn’t change it for anything. There is just something about the Vuelta that other races don’t have; it is a little more casual, there isn’t the full on commercialism and the racing is better than many other races. 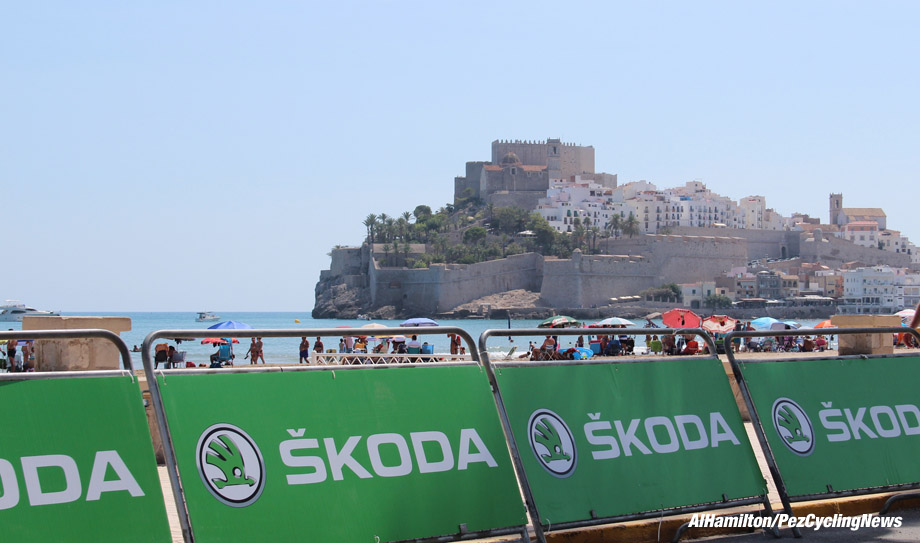 My time with this year’s Vuelta started on Monday, it was easier to pick up the ‘creds’ in Peñiscola than run around on the rest day. When trying to get that important label to hang round your neck and the sticker for the car, something happened that brought back why I love the Vuelta and Spain. You couldn’t get to where they issue the accreditation without accreditation. The police had closed the sea-front and you couldn’t drive in without that car sticker. Catch 22. But there is always away round these things, thank goodness for my AIJC press card. The policeman didn’t know what it was, but it worked. 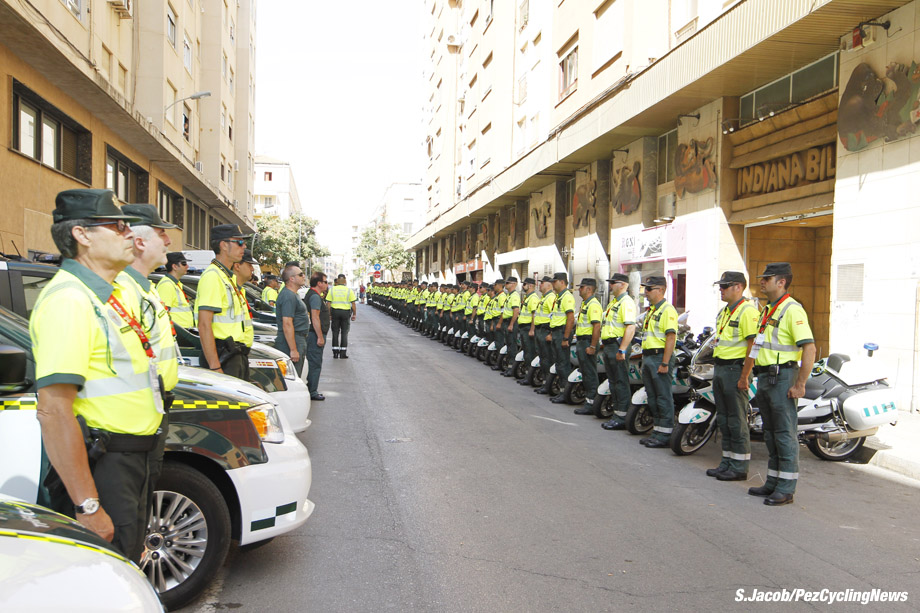 On Wednesday stage 17 started in Castellón and for some reason my GPS was useless, so it was a case of looking for the helicopter and heading for that. Of course when I got there the parking was full, but round the corner I spotted Cos Vos photographer, Sabine Jacob, who supplies many of our pics, she had found some (semi-legal) parking. She had also been lost. 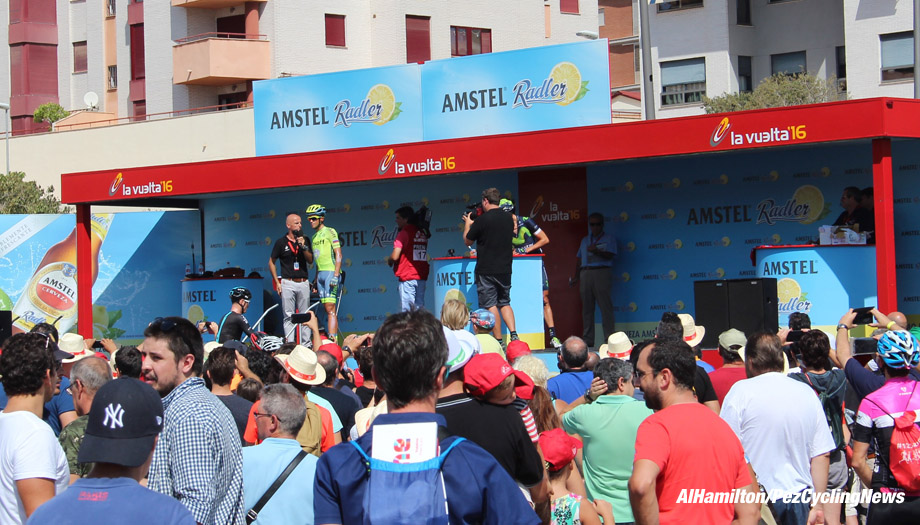 It was good to bump into old mate and stage winner, Sergey Lagutin. Happy but with a new scar on his arm from a fall the previous day. 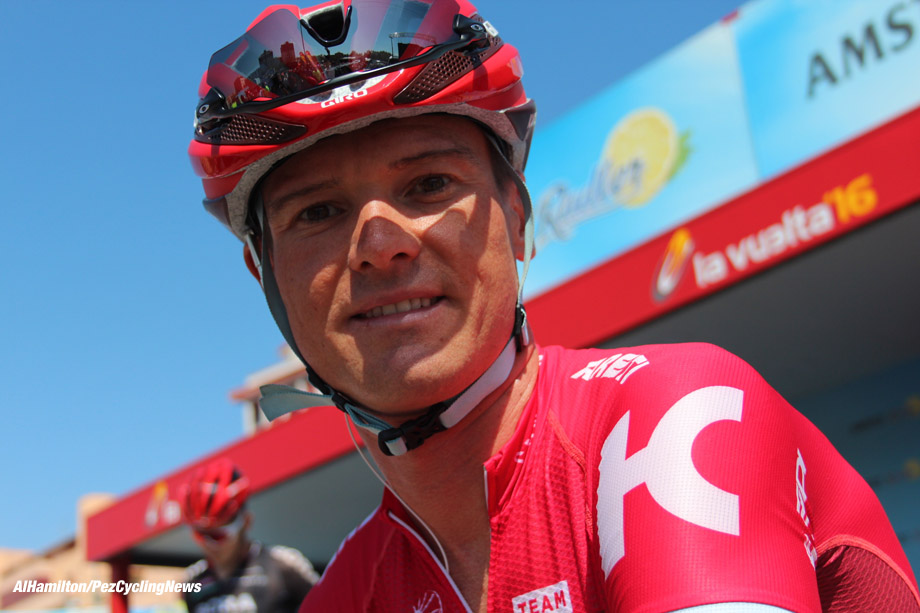 The sign-on was its usual chaos and the amount of Colombians was again staggering. 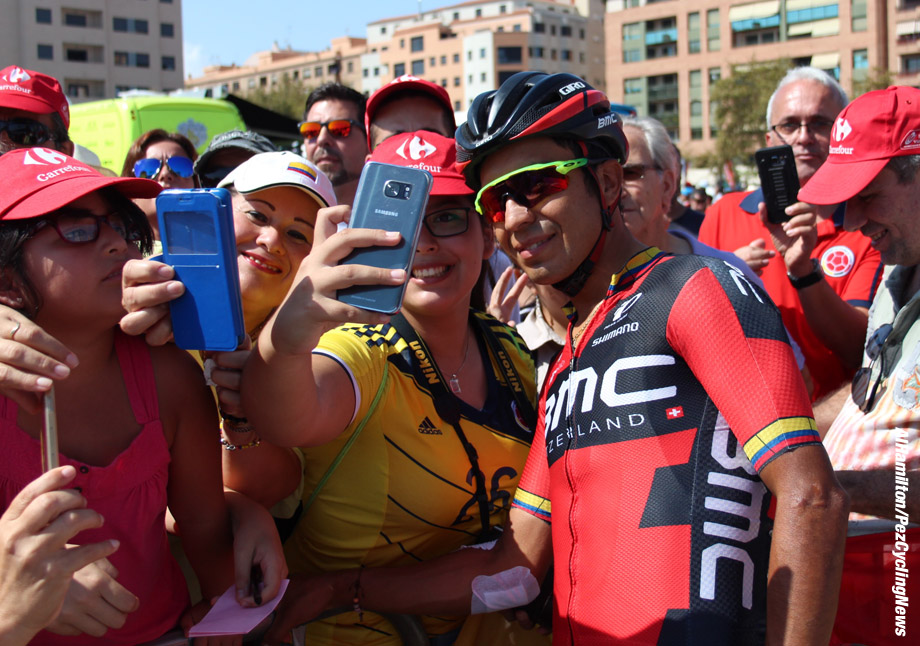 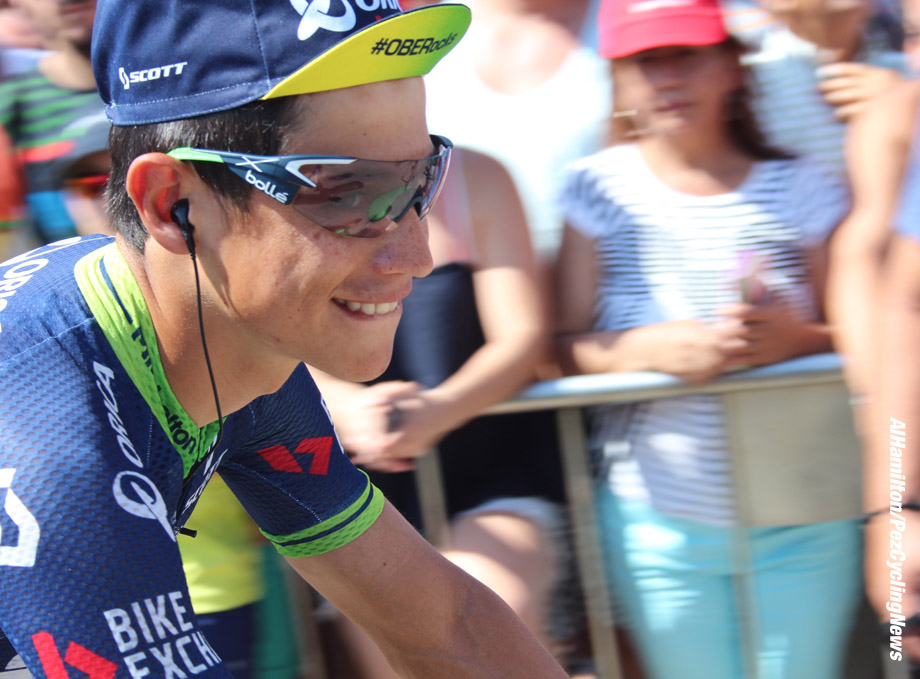 Bic is a big sponsor this year, but you have to feel sorry for the guy in the big suit. 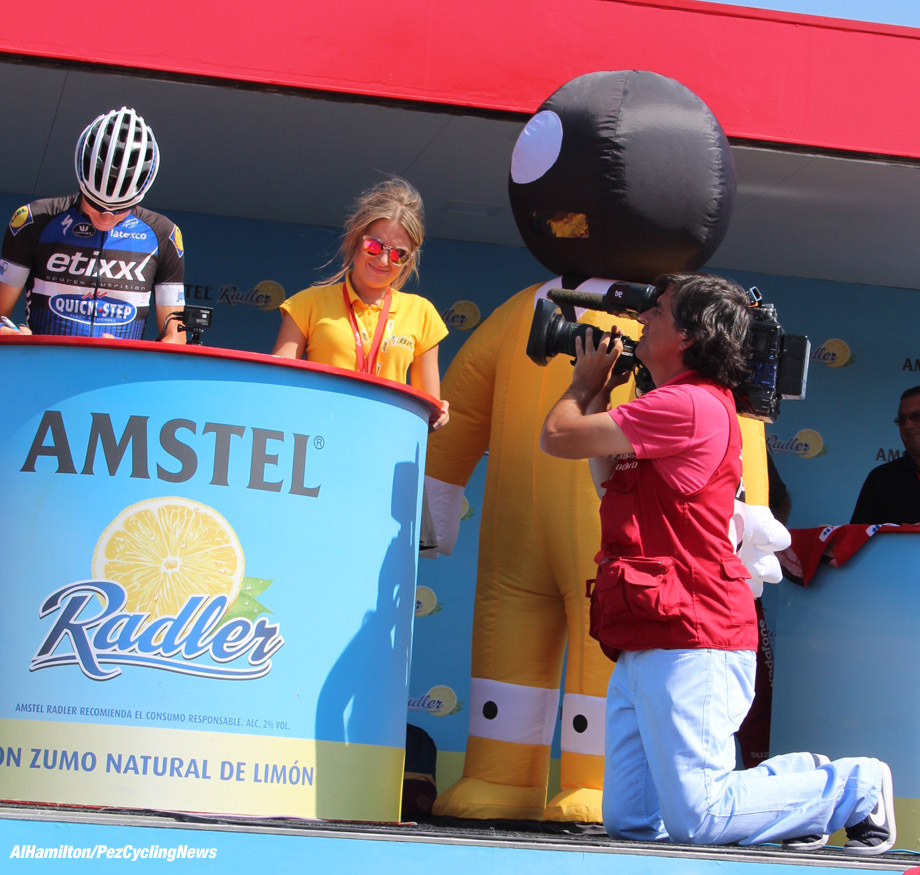 Time for the start. The plan was to see them off, then catch the race on the small loop, then try to go to the finish. Funny how these things work out even when you don’t try. 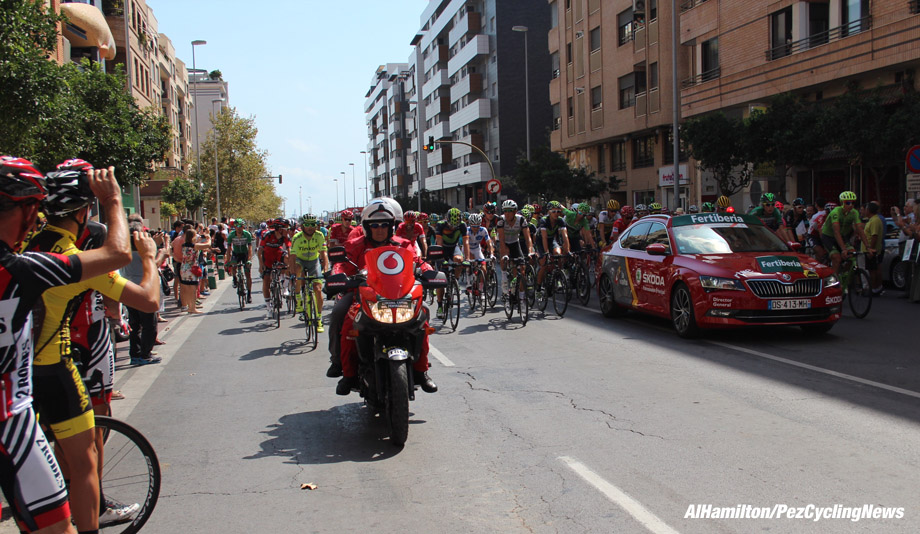 I saw Sabine had a GPS, maybe she is the best person to follow. No, her’s didn’t work in Castillón either. Eventually we were split and I nearly ended up on the motorway to Barcelona. But at the next round-a-bout the police had stopped the traffic for the race. Perfect! 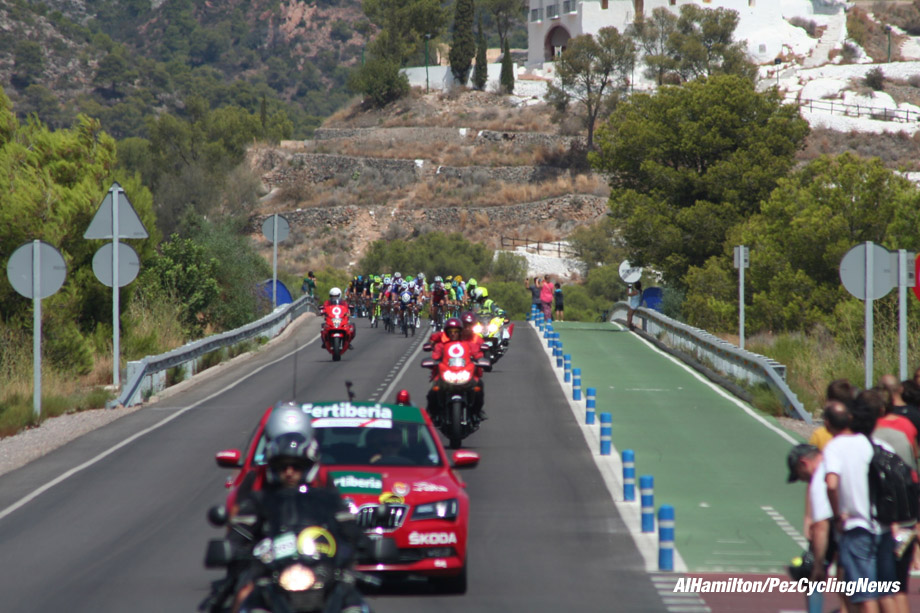 Maybe not the best place for photos, but good enough for the atmosphere. 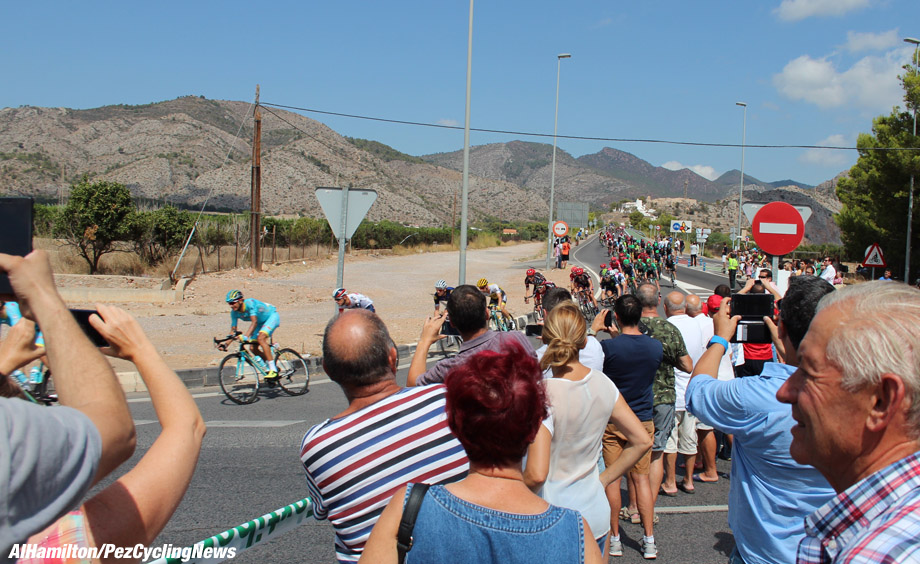 Getting behind the race and following the team helpers to the short-cut was easy, apart from the driving skill needed and soon I was at the base of the day’s big climb of the Alto Mas de la Costa. There wasn’t enough room or the possibility of getting the big trucks to the top, so the press room was in the village of Llucena, up about 100 old stone steps. Problem No. 2, I would need a special pass to drive to the top, so should I watch the race from the village or go up? 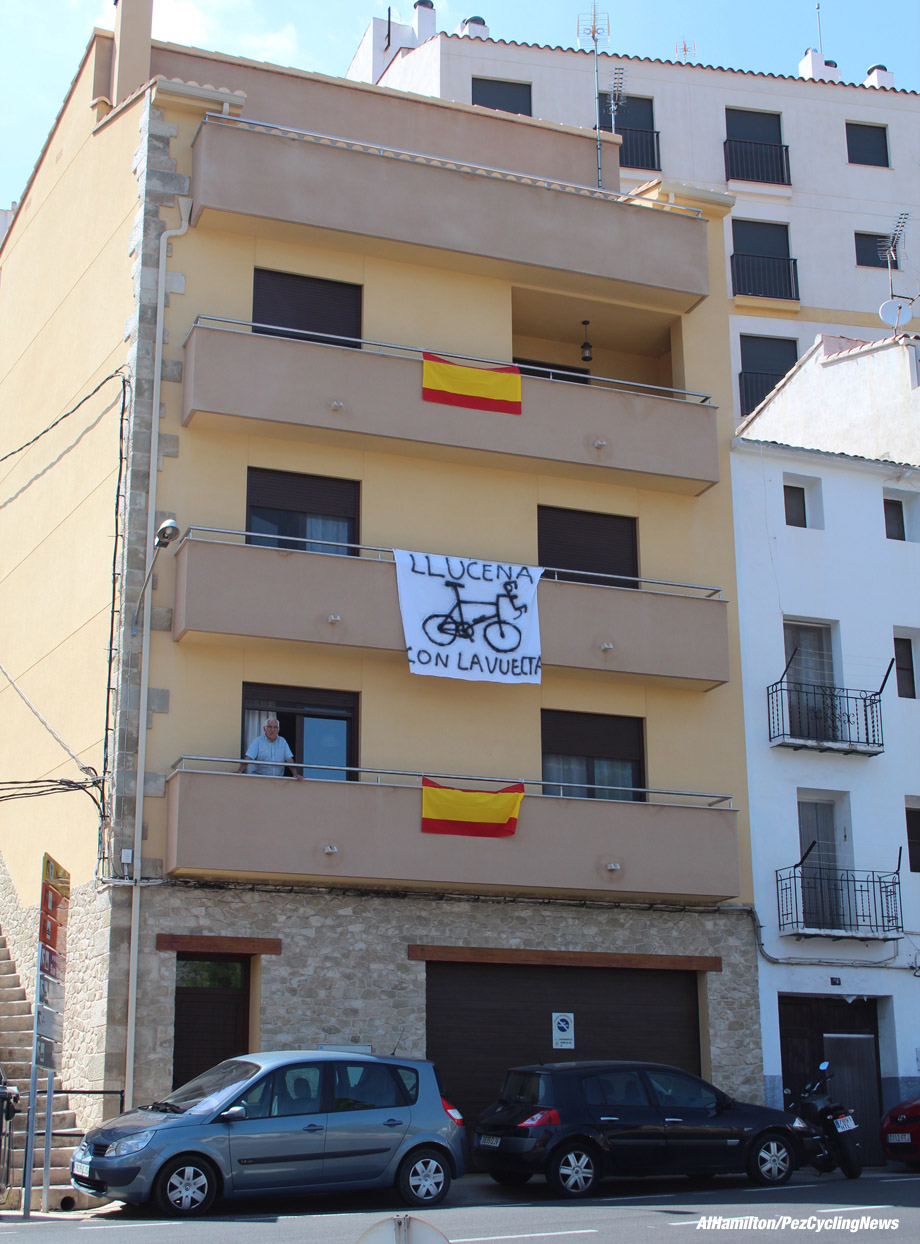 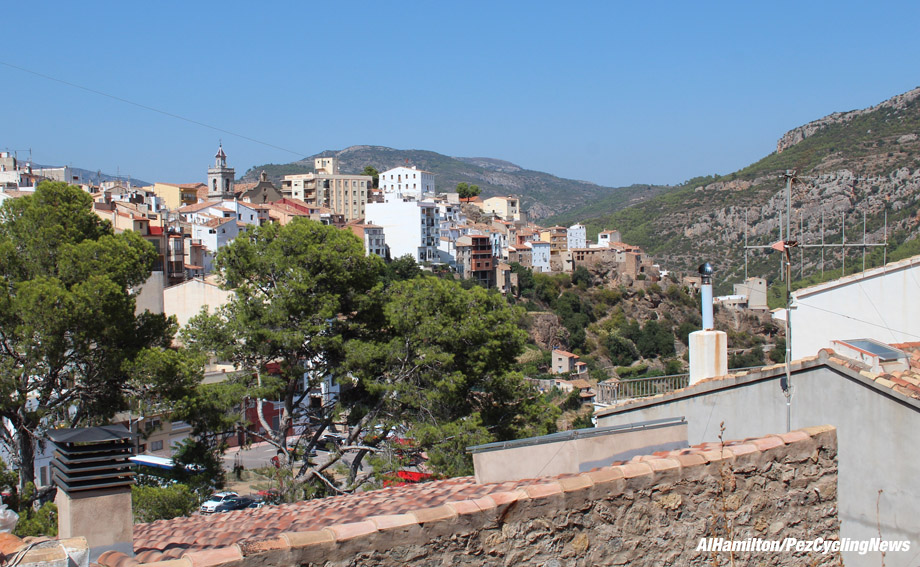 No problem, on the way up I meet the guy who runs the press relation, who asks if I want to go in his car. Perfect again and it saved burning my clutch out on the climb. 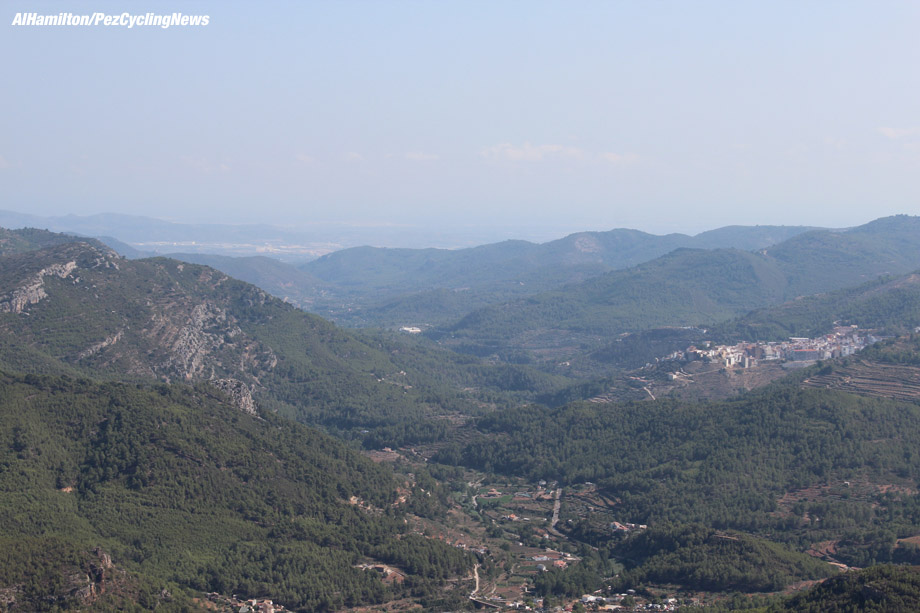 It was crazy on the climb, the fans had to walk 8.5 kilometers as there was no car traffic apart from the Vuelta, but there was thousands and again many Colombians. 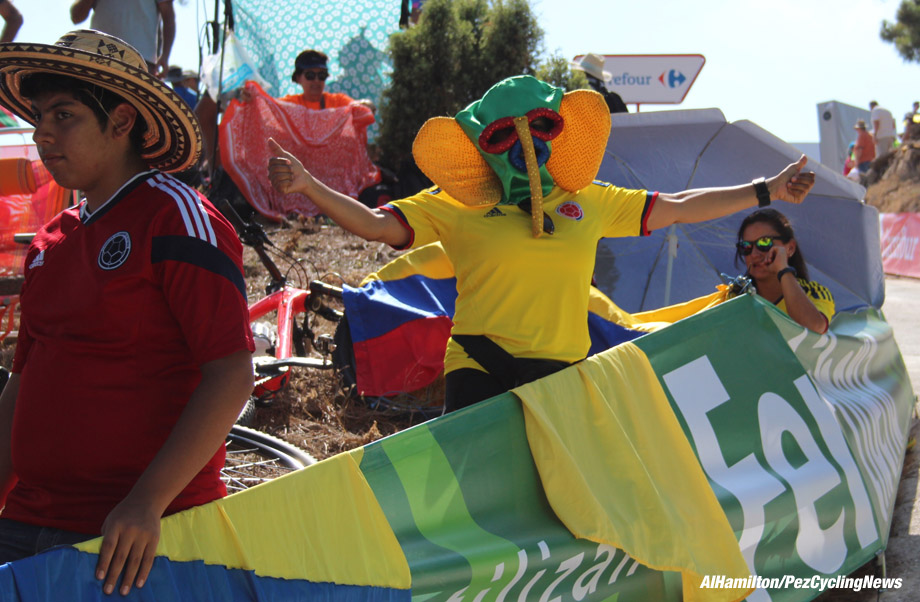 And who else? Purito: 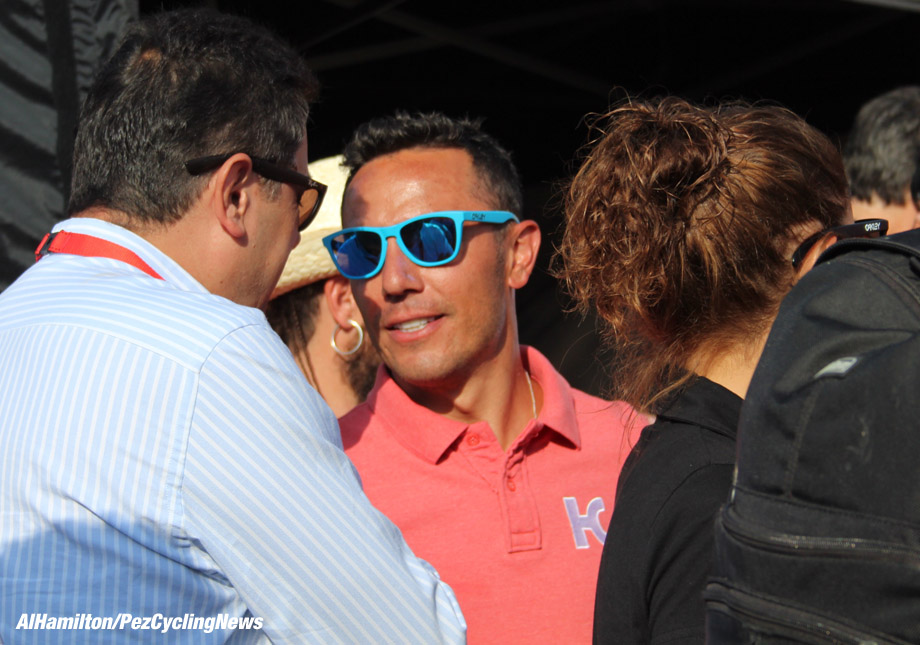 Could that be a Tour winner? 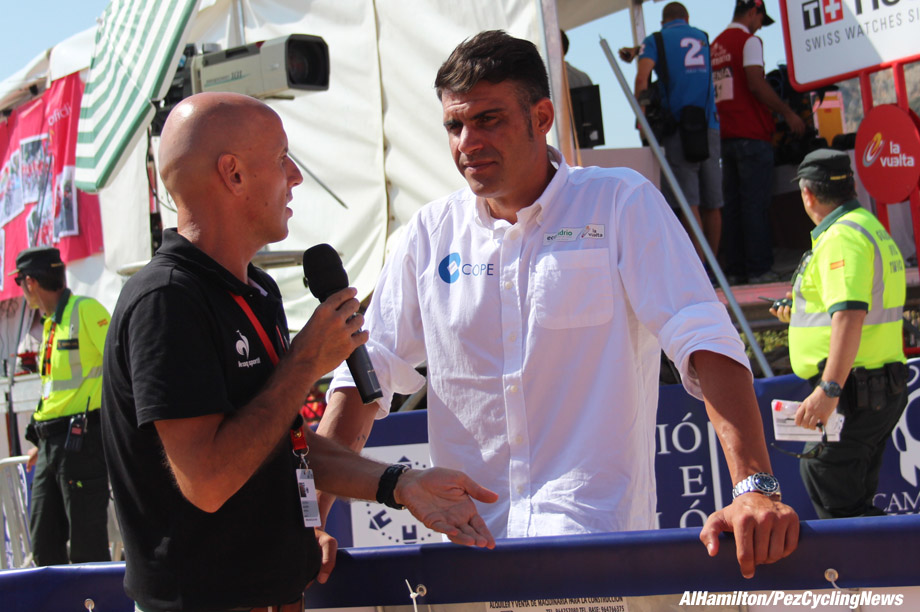 A walk down from the finish line confirmed the feelings from the drive up. It was steep. 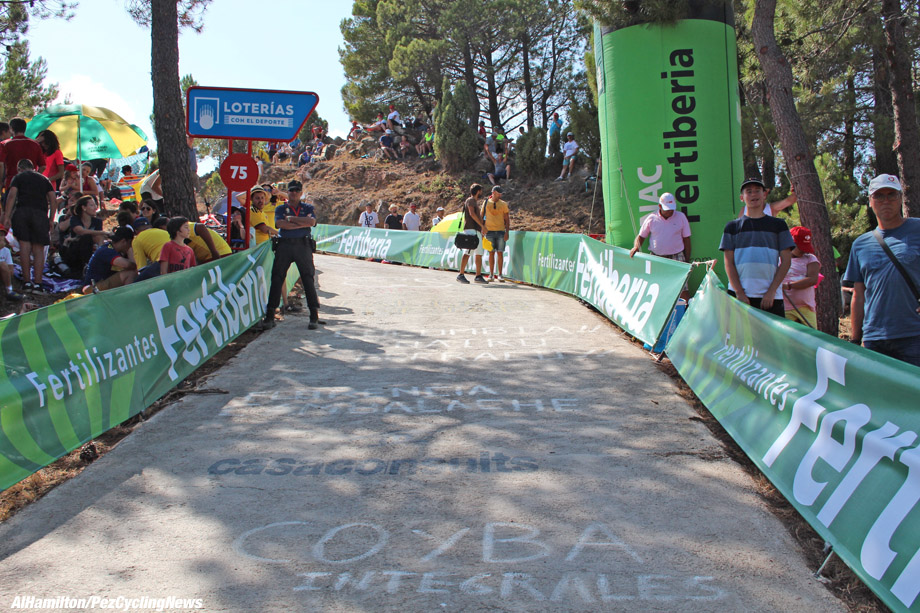 Nice place for the podium though. 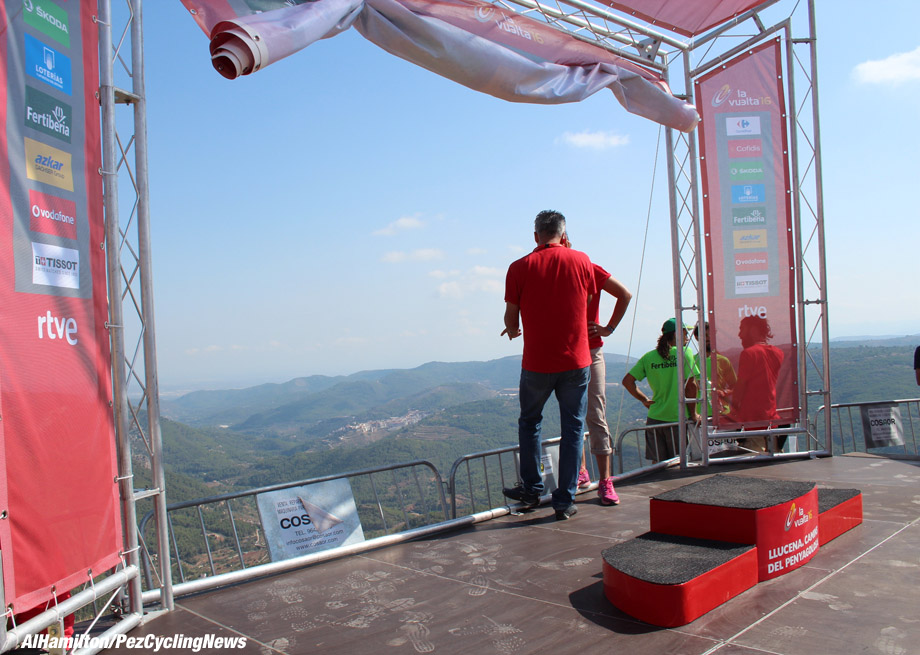 Time to wait for the race to come, the make shift bar was tempting… but no. 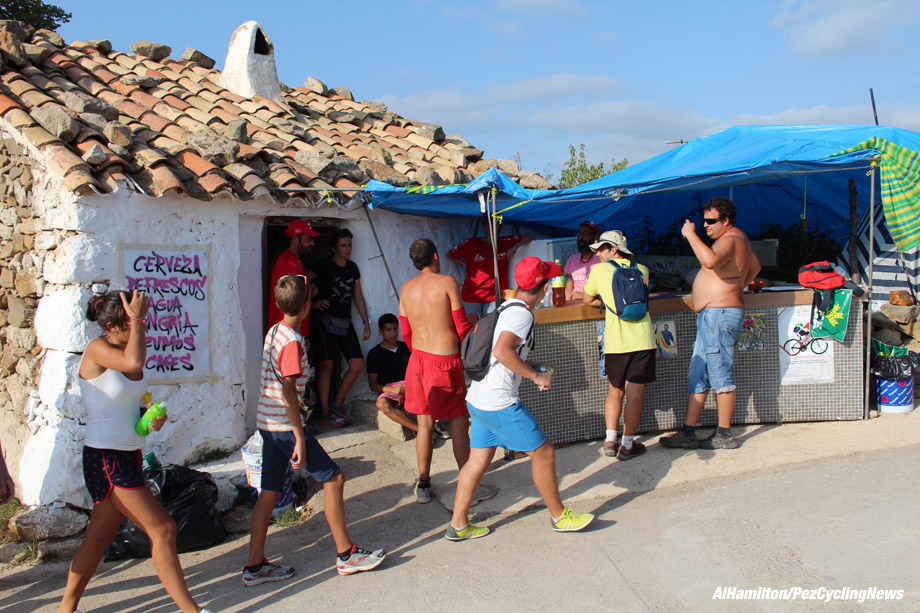 Mathias Frank came struggling over the line, you could see it had hurt, but he was happy. 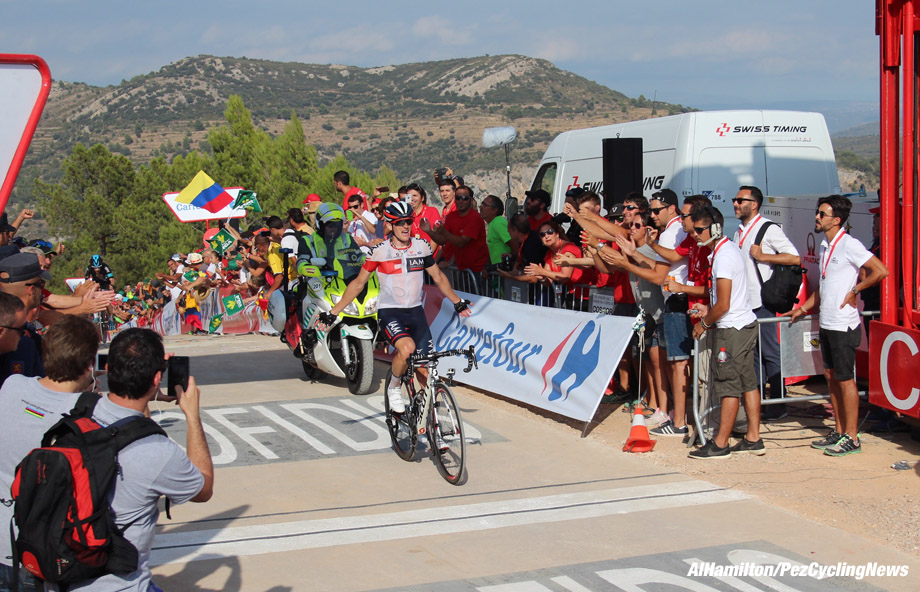 Word was coming through that Chris Froome was in trouble on the steep parts of the climb and that Alberto Contador had attacked. At the line the top four were together. 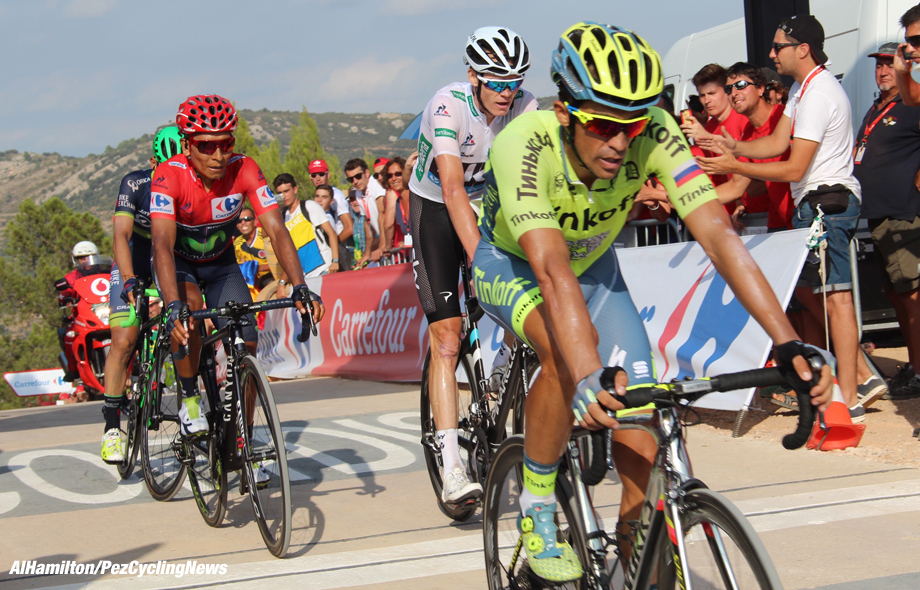 Froome was exhausted, maybe he shouldn’t have gone to Rio? And why the pink whistle? 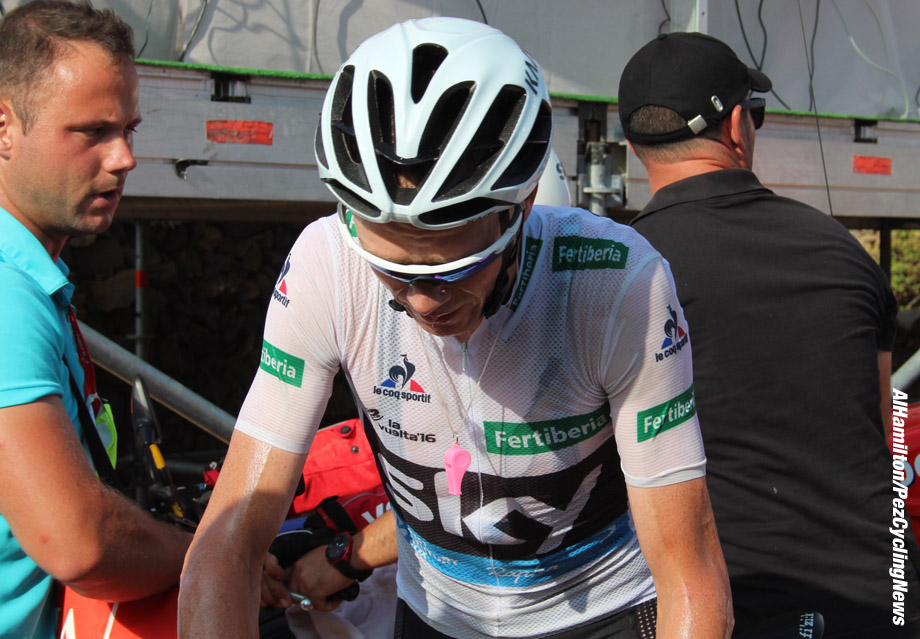 The loser on the GC was Simon Yates, he lost just under one minute and is now two minutes adrift of Contador. 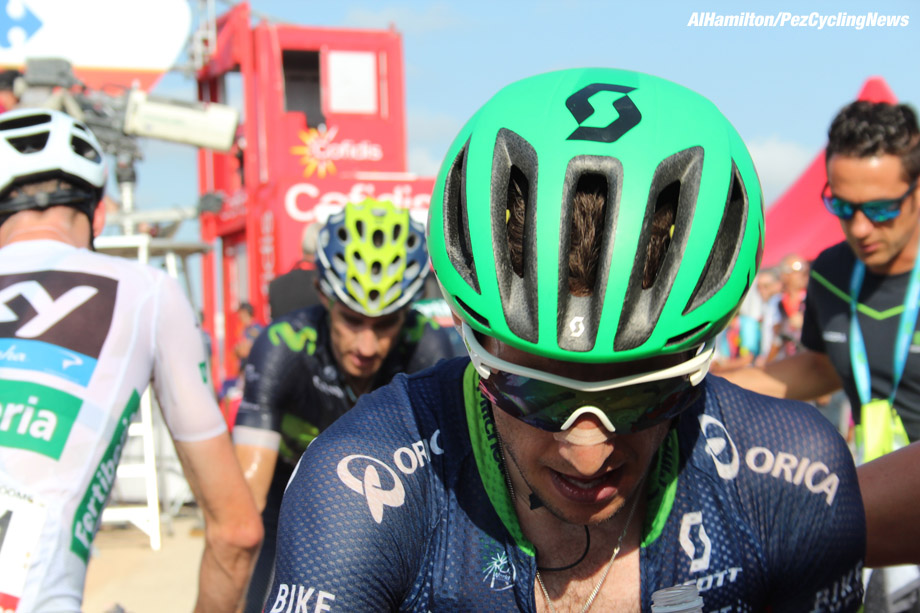 The ‘Old Man’ Alejandro Valverde didn’t look too bad, he had lost time, but held his points jersey. 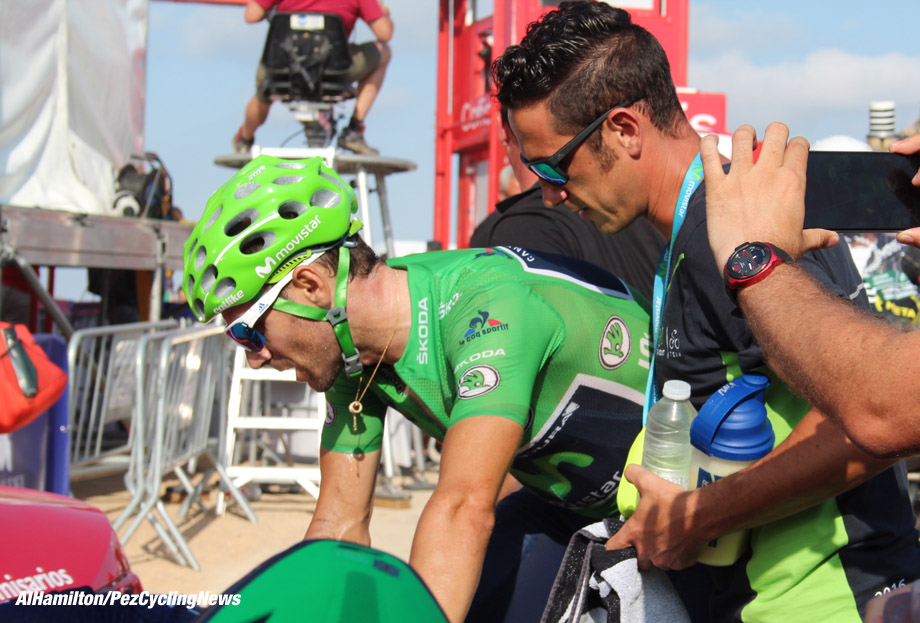 Esteban Chaves had saved his podium place on this hot day, some riders needed ice. 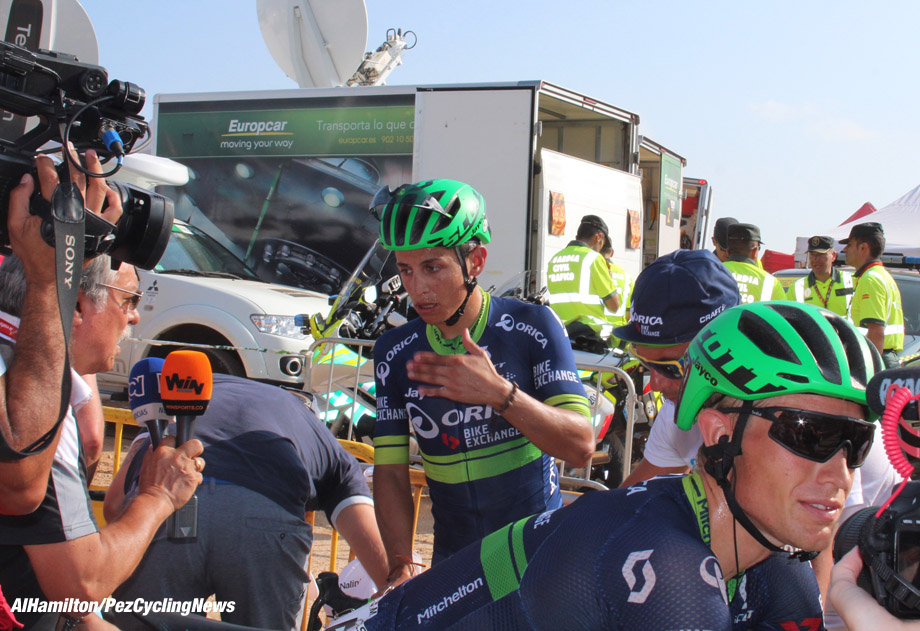 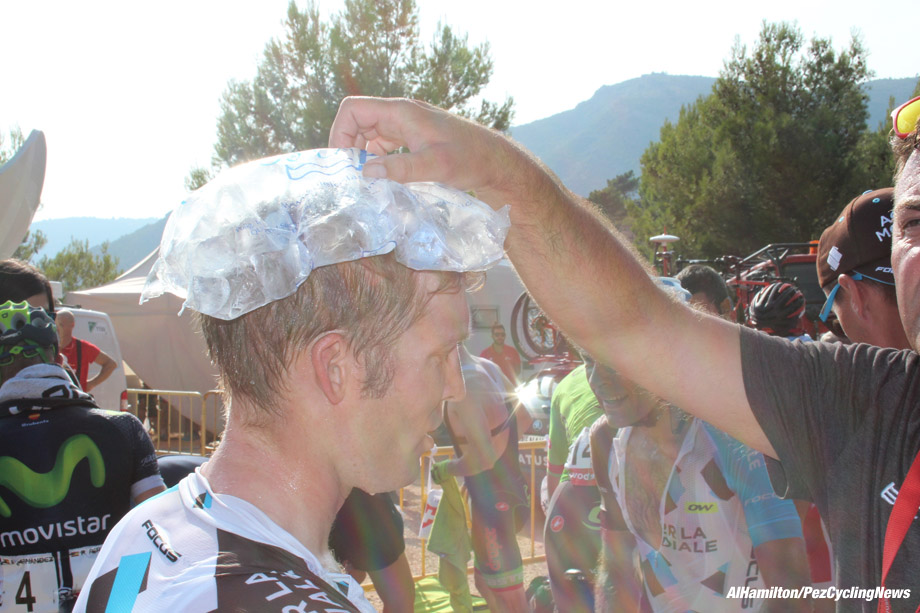 Nairo Quintana cooled down on the trainers. 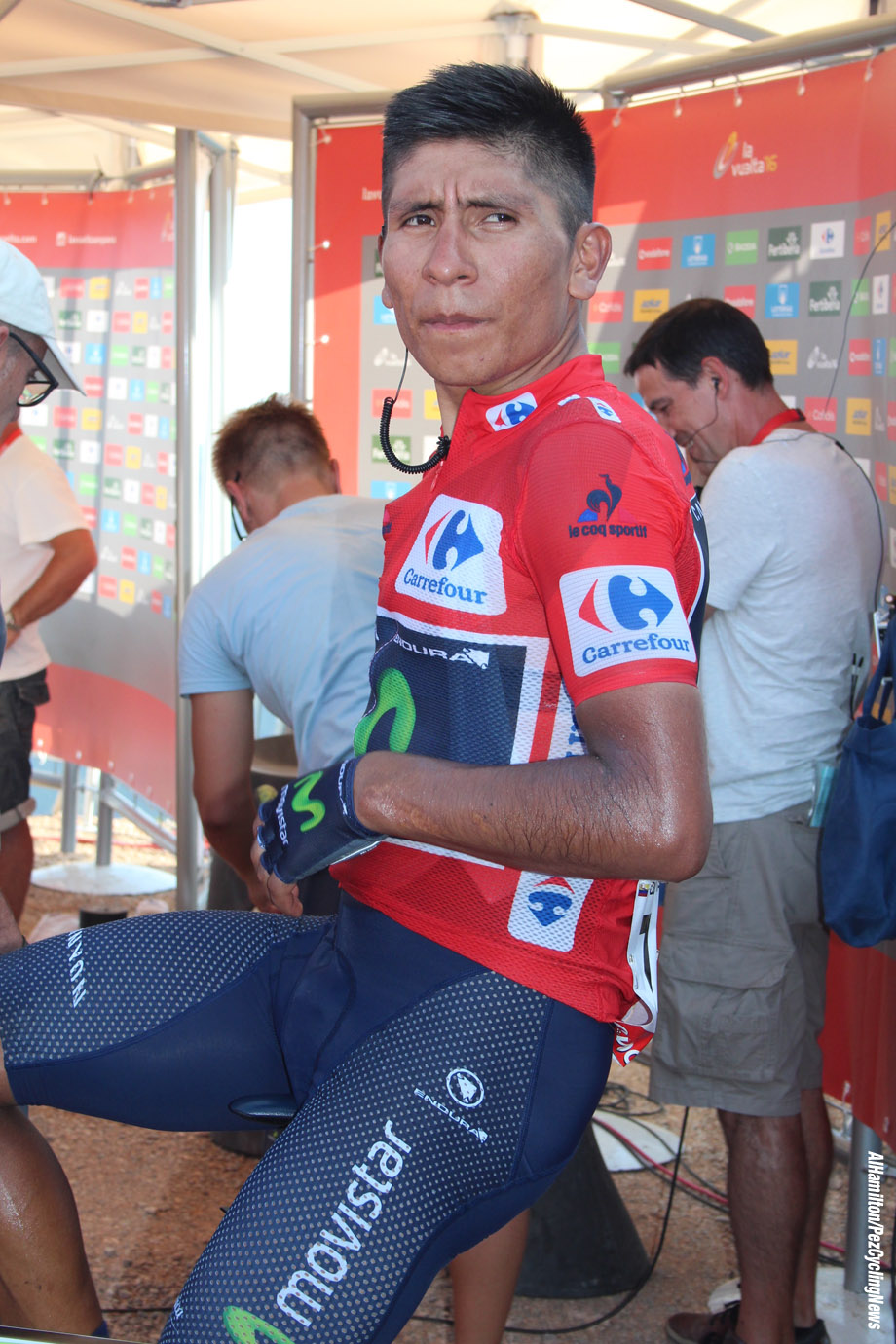 The Cava was flowing for Mathias Frank and there was another soaking for the photographers. 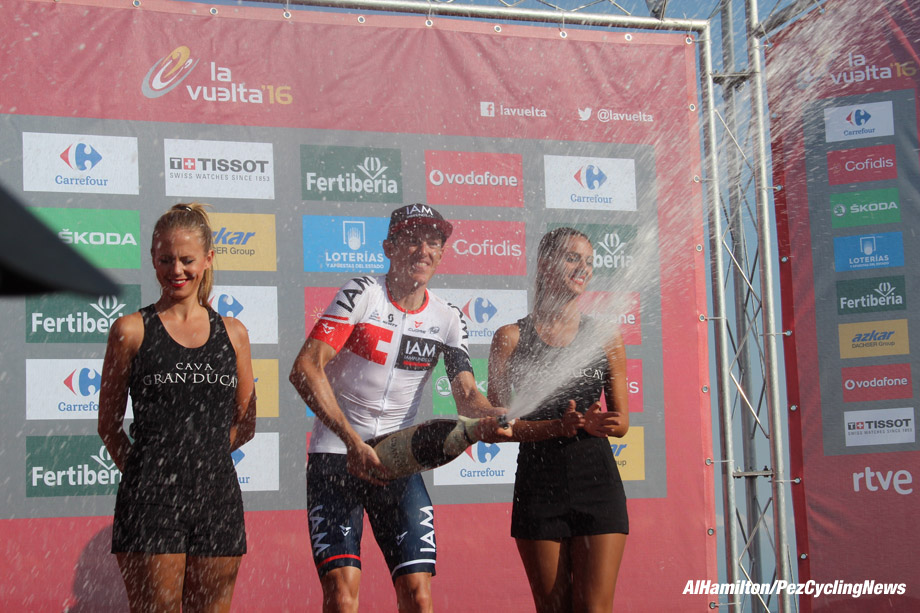 A great end to a long day. Now there was just the small case of getting off this mountain and getting home. Although the sight of these cyclists did help. 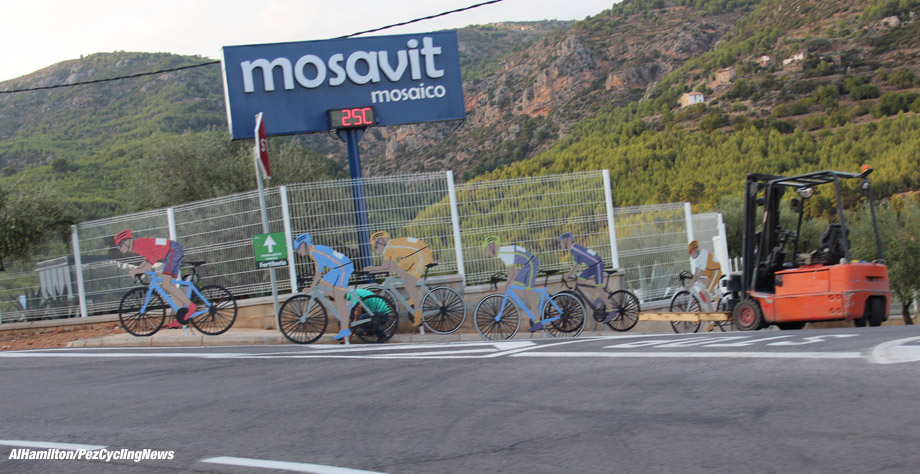 Thursday a sprint finish in Gandia – an easier day… maybe.