With Wim Van Est, my passion for cycling started. He has been the very first cyclist I have ever touched, the very first one who talked to me. It was in Antwerp-Belgium in 1961: I was 8, he was 38. And still finishing this street race behind motorcycles (derny race) in a very honourable position.

He shook my hand, this huge champion, who was and still is one of the legends of Tour de France history, who won the Tour of Flanders in my native year 1953, who won 3 times the legendary endurance race Bordeaux-Paris, who was the very first Dutch Yellow Jersey and Pink Jersey in both Tour and Giro. He was the man who put Holland on the world cycling map.

But what everyone remembers is the Wim Van Est who took the Yellow Jersey in the 1951 Tour, and – the next day, racing down the Aubisque in pursuit of Fiorenzo Magni – fell 70 meters deep in a ravine. Rescuers got him out establishing a chain of tyres, but he lost the jersey and didn’t reach Paris. Back in Holland, the Dutch team’s sponsor – Pontiac watches – launched a huge poster campaign, showing Wim Van Est saying: “I fell 70 meters deep, but my Pontiac was still running !” 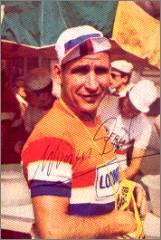 Wim was one of a kind, the kind of real men, who took life with both hands, knowing he would have to use them. Born in 1923, he earned his money smuggling tobacco (spent 6 months in jail), until he started cycling as a professional in 1949. In the same year he already finished 3rd in the World pursuit Championships, won by Coppi. He didn’t bother much about style, it was all about power, about hitting the pedals. He has been called “The Locomotive”, “Iron Wim”, “The Aubisque Survivor”.

I met him again last year, 40 years after our first meeting. He didn’t remember (of course), I did. He is the man who gave me this passion for cycling. He was and still is my hero !