At the 1985 Worlds in northeastern Italy, the red-hot favourite was homeboy Moreno Argentin. With home-court pressure at the max, somehow an old man from Holland peeled in to steel the show. Ed Hood was there…

We didn’t bother to zero clocks back then, but it’s a long way from Dunfermline in Fife, Scotland to Giavera, near Venice, Italy. It took 27 hours as I recall but what the hell, it was the 1985 Worlds we were headed for.

The race had already started by the time we arrived at the circuit on the Sunday morning, we thought there was a practical joke going on as a team of guys in turbans pedalled past. It transpired however that the Indian national squad was riding, why they weren’t in with the amateurs I don’t know. They received plenty of encouragement from the big crowd – 300,000 we heard, until they were lapped and pulled-out.

The circuit had a tough climb on it and we found our barrier spot there, among the camper-van fans. These were the real aficionados – timber decks on the roofs of their vehicles with chairs, a table, a parasol and portable TV up there. 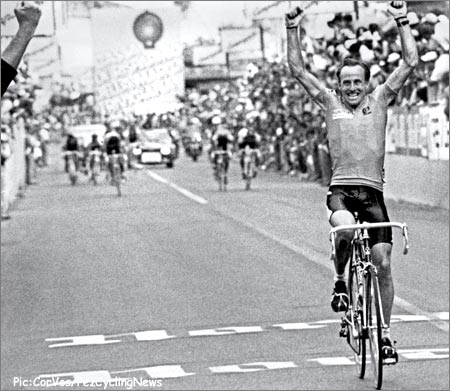 Like an aging rock start, Joop Zoetemelk cranked it up one more time for the Dutch fans.

The red-hot favourite was home-boy, Moreno Argentin, with four Liege-Bastogne-Liege and three Fleche-Wallonnes among his palmares. A small, dapper Venetian, his strengths were a sprint that was undiminished at the end of the toughest classic and a power-to-weight ratio that rendered him practically unbeatable in an uphill sprint-finish.

The Italian squad was a cohesive unit and there was an air of confident expectation around the circuit; the tifosi could smell a home-win coming.

The Italian squad were indeed disciplined and cool, curly-haired Emanuelle Bombini in particular was either in the break covering, or chasing at the front for virtually the entire race – a model of team-riding.

As Scots however, there was only one rider in the race as far as we were concerned – Glasgow man Robert Millar. His Worlds record was impressive; in 1979 a foot pulled from a toe-clip on the last climb cost him a medal in the amateur race – fourth was his reward that day.

In 1980, in his first pro Worlds at Sallanches in France with one lap remaining there were just three riders in contention – eventual-winner and living-legend, Bernard Hinault (France), double Tour of Lombardy winner Gianbattista Baronchelli (Italy) and Millar. He cracked on the last lap, but finished an eventual 11th – a stunning pro Worlds debut.

In 1981 he was at it again, jumping-away in the closing kilometres, it took the might of the Italian team to bring him back just before the finish, where Freddy Maertens returned from the dead to beat Giuseppe Saronni into second with Millar an eventual 14th.

As the ‘85 race progressed our boy made all the right moves and with two laps to go he was in the thick of the action. What mere mortals find hard to understand is that the last lap of the pro (or elite) worlds will always be the fastest and this lap will virtually always be faster than the fastest amateur (under 23) lap. With the amateurs though, the fastest will generally be the first, so as to shake-out the chaff.

Giavera was no exception, the last lap was crazy – no more riding comfortably on the tops on the inside ring; big rain, take the pain or forget that podium. We had moved up the climb so as not to miss the crucial action and Millar was right there; one of an elite gaggle of just 14 riders, one of whom would pull-on a rainbow jersey in 20 minutes time.

All the ‘heads‚ were there – Claude Criquielion, Marc Madiot and Stephen Roche amongst them. Millar was torturing himself, mouth wide-open, and his face showing the pain that only the real stars can inflict upon themselves. The sight of him there, with the best when it really mattered made us so proud.

He was no sprinter, but maybe this would be the year one of his audacious late attacks would stick.

There was an audacious, late attack but it didn’t come from Scotland, it came from the Netherlands instead. The oldest man in the race – Joop Zoetemelk, eased himself off the front with just a few kilometres to go.

Like Paul Sherwen says; “it’s a poker game, Phil”‚ Joop had played his hand, but the others were holding.

As Zoetemelk, head to one side, in the style that won him the 1979 Vuelta and 1980 Tour, drove hard the others looked at each other and waited for someone else to start the chase. 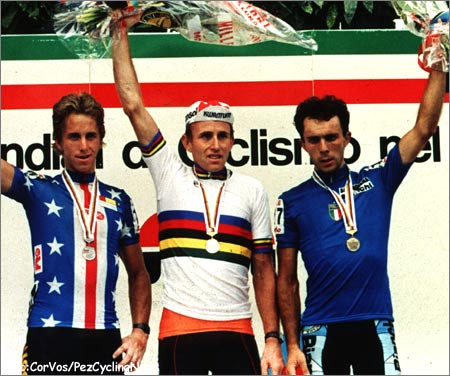 On the podium – LeMond and Zoetemelk beam while Argentin bears the weight of a man who let down a nation.

We were huddled around a portable TV which one of the tifosi had set-up; the Squadra Azzuri had lost control and Zoetemelk was inching-away, every revolution of the pedals taking him closer to gold.

The title was slipping-away from Argentin and he had to pick-up the chase himself, but it was too late, the title was leaving Italia.

As the Dutchman free-wheeled across the line, arms high, a huge grin splitting his face as Greg Lemond jumped Argentin to take the silver.

In fairness to the little Venetian, there was only one medal he was interested in and he could hardly have looked less enchanted if he had been handed a dog turd rather than the bronze medal at the presentation.

The Orange win was greeted with total silence and the exodus from the circuit had started before Argentin had even finished; those tifosi expect a lot from their heroes.

The Scottish contingent went home happy though, our boy had battled to the end, given his all and filled us with pride – you can’t ask for any more from a little guy from Glasgow.