Having covered the Six Days, The Giro, Le Tour, and now the Worlds, Ed Hood was, on the scene with camera ready to catch the winners, losers, and the ‘dear god where did that come from’s’ in Salzburg. Never short on opinion or what constitutes ‘style’, we submit for your consideration, Mr. Hood’s selections…

What Makes A Jersey Cool?
You need good colours to start with – it’s always going to be hard for Latvia to get my award – maroon? 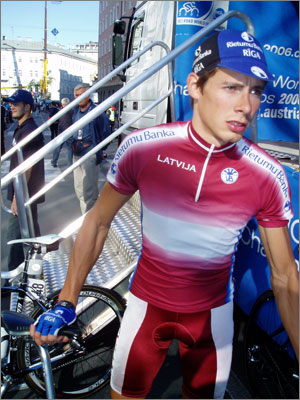 Once you have your good colours you have to combine them simply but stylishly, France used to be great at this but might have lost the plot with too many stripes. 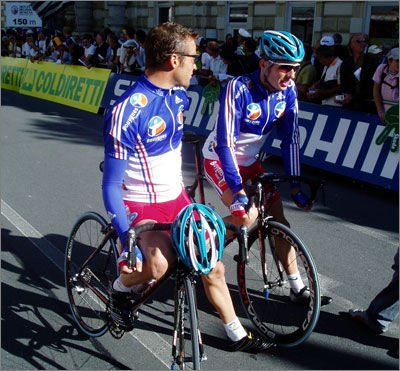 The Belgian federation stumbled a few years ago by trying to insert a ‘sub-pattern’ within the blue body, but have comeback to their senses with a jersey that’s not too far away from those worn by Merckx in his glory days. 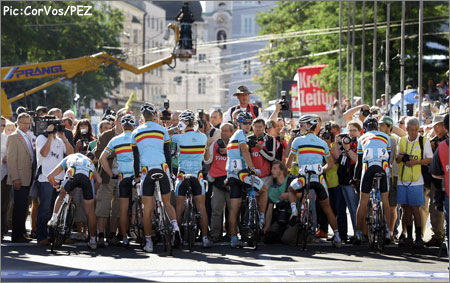 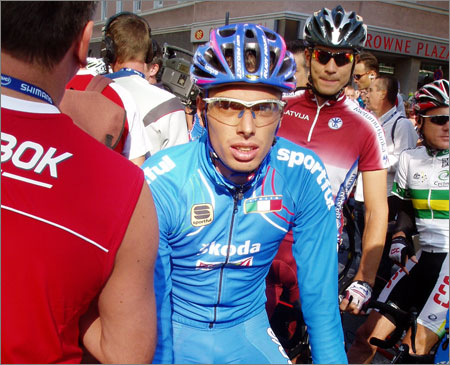 The Italians too after years of playing around have come back to a nice plain design, an up-dated version of the famous azzurri, it looks great. 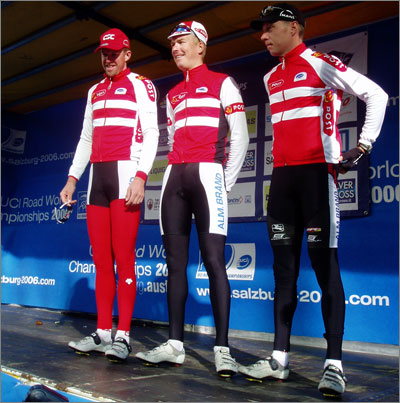 The Danish kit is a good example of design that has stood the test of time; it’s not so far away from that worn by my boy-hood hero Ole Ritter. 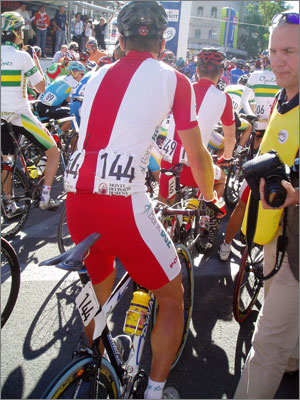 The Pols have a good working kit. 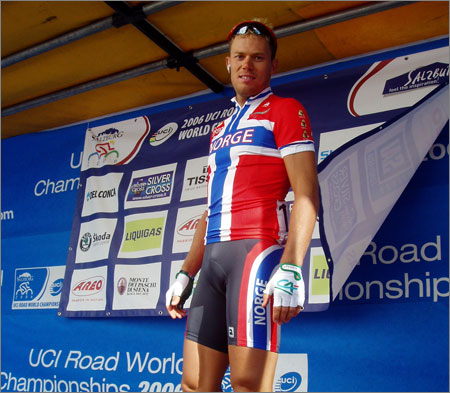 Poland, Norway and Colombia are another three nations who haven’t changed things too much but still look fresh. 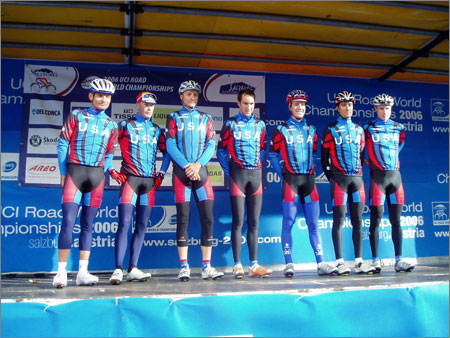 The US jersey used to be cool, the stars and bars; what could be more iconic? Lemond, Lance and all the others wore it and looked-good in it; is anyone else scratching their head at this new kit…? 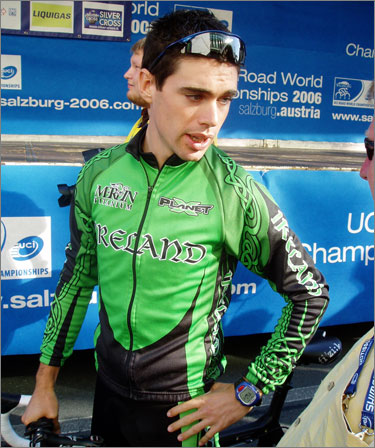 The Irish jersey is one which would do well to look back at its roots, the version worn by Roche and Kelly was cool. Black and green reminds me of too many long nights at the Irish pub and the ‘Celtic’ writing makes my head hurt about as much…

The worst? – Perm from Latvia, Ireland and Croatia. 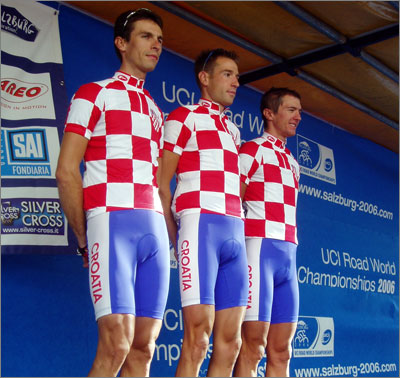 Apparently the Croatian team got a deal on some jockey kit.

Before we go on to the coolest rider award there are couple of minor awards to dispense; starting with ‘best haircut.’ It’s a no-contest; big Russian, Vladimir Karpets wins hands down. 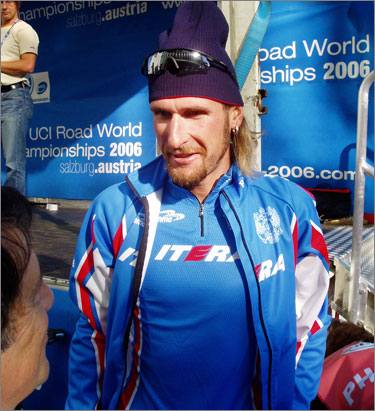 Honourable mentions have to go to Mexico’s Julio Alberto Perez Cuapio for services to the hair products industry and to Dutchman Bram De Groot’s continuing commitment to the mullet. 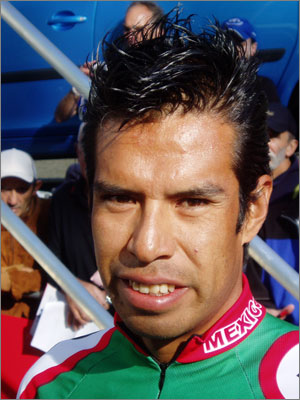 Gel, gel, and some more gel…perfect for putting a helmet on. 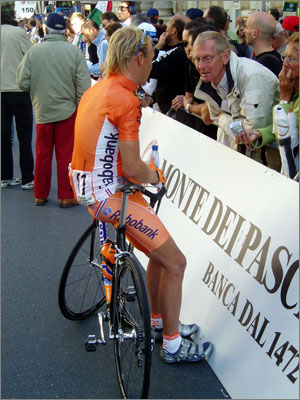 Ahh, the mullet, to like it or hate it, or just to gawk at? 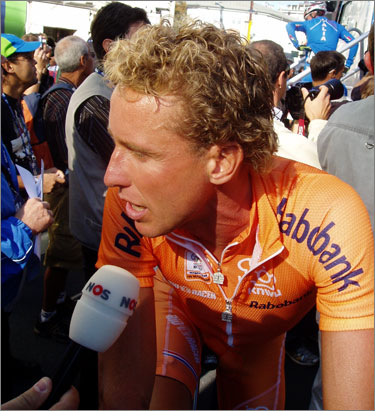 Booby Prize for you Boogie. How much does a man-perm cost anyway?

The booby-prize goes to another Dutchman; Michael Boogerd who has modelled his perm on that of some long-forgotten second division footballer. 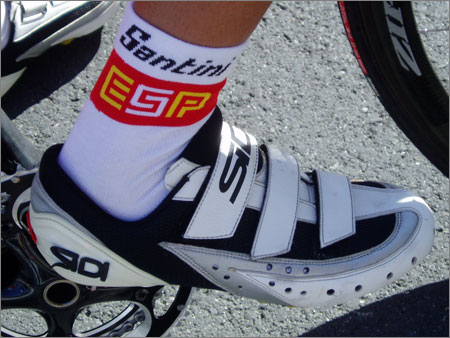 Ed’s got a hankerin’ for the Espana team socks.

It’s the little touches that make the difference and I have pleasure in my first ‘top sock’ award, which goes to the Spanish team. 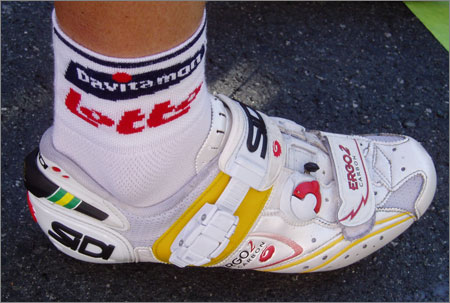 I’m pleased to see that Lotto have listened to my past critiques and shortened their design from just below the knee where it used to finish. 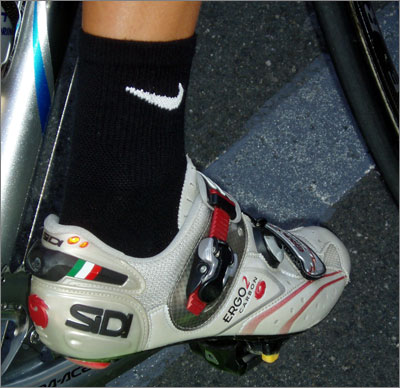 The booby prize has to go the black sock, they just aren’t right.

So What Makes A Cool Rider?
Great palmares don’t necessarily make a cool rider, nor is it necessary to be a joker; Indurain was no Bob Hope but he was cool as beans. Rolf Sorensen too didn’t say too much but he just oozed class. It does help to be tall although Robbie McEwen isn’t big he is cool, aided no-little by custom Aussie-colour-flashed Sidis. 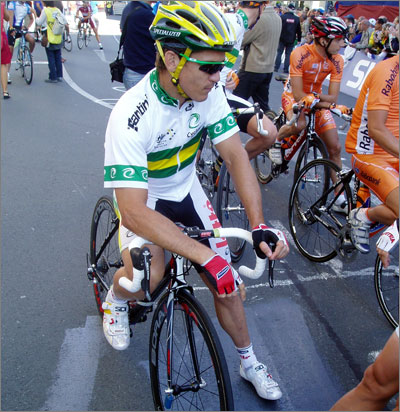 Robbie McEwen has the look down, all the way down to his shoes.

It also helps to be handsome, but it’s not essential, Guy Smet for example, hasn’t been on the cover of GQ but the man is glacially cool. 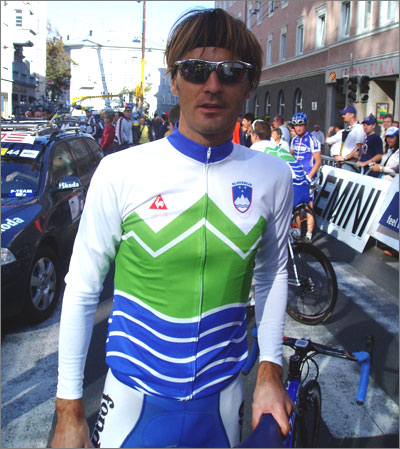 Go-Go Stangelj gets high marks…too bad his kit is… less so.

The choice was hard, ‘Go-Go’ Stangelj of Slovenia for example, tall, cool hair, winning smile and a great rapport with the fans – despite that jersey. 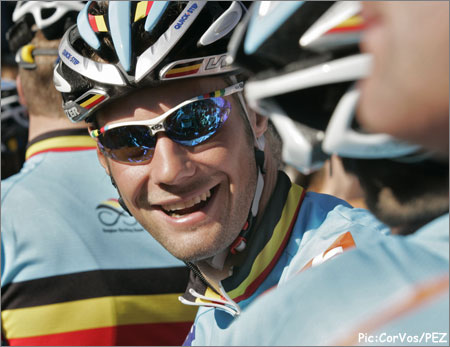 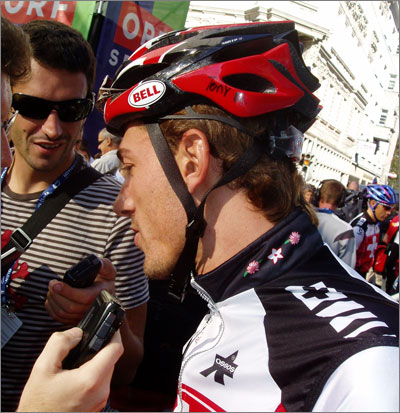 Cancellara, tall, burly, handsome multi-lingual, always time to talk to the press and a world champion now just to top it off. 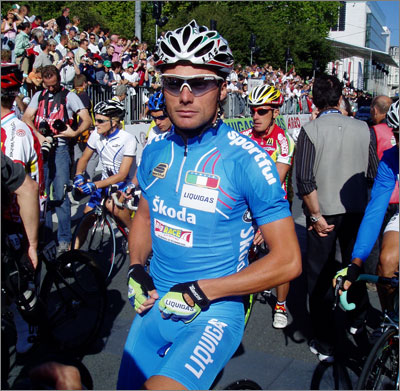 We pumped for Danilo Di Luca, he does the ‘Killer’ thing so well, he’s fast and to top it off his Bianchi was sprayed to match his jersey – attention to detail gets noticed at PEZ. 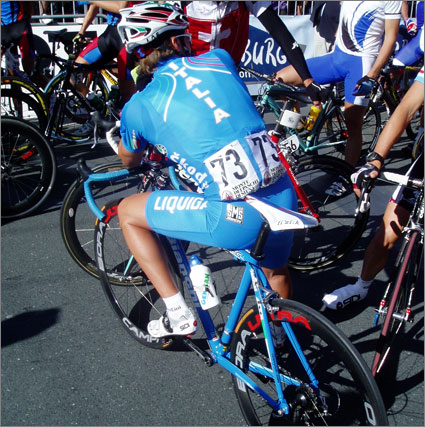 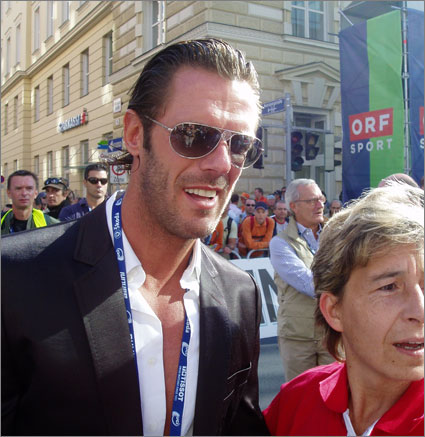 Does anyone do it as well as Cipo though? Nope.