Worlds’14: The Last Word from Ponferrada

Just when you thought the World road championships were a distant memory, we have one last blast from Ponferrada. John Young had a pile of great pic’s left in his unused locker from the champs, so here is John’s favourite shots to bring you ‘The Last Word’ (or picture) from the Rainbow jersey competition.

As the season winds down we thought we’d take one last look at Ponferrada and the Worlds through the lens of fietsenphotography’s John Young who supplied many of the images we used for our roadside coverage – words by our man who was roadside in Ponferrada, Ed Hood. 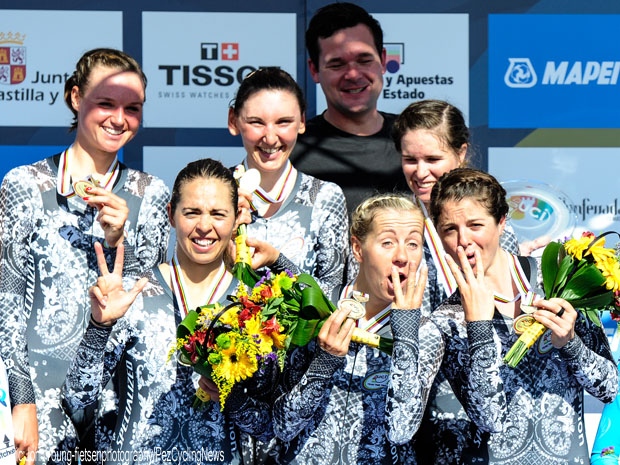 Elite Women’s Team Time Trial: Specialized-Lululemon took their third consecutive TTT title by a yawning – for this discipline – 1:17 margin; but it will be their last as the team disbands at the end of the year.

You have to feel that sometimes the clothing designers try to be too clever, though – I couldn’t help but think that the girls looked as if they’d been wall papered . . . 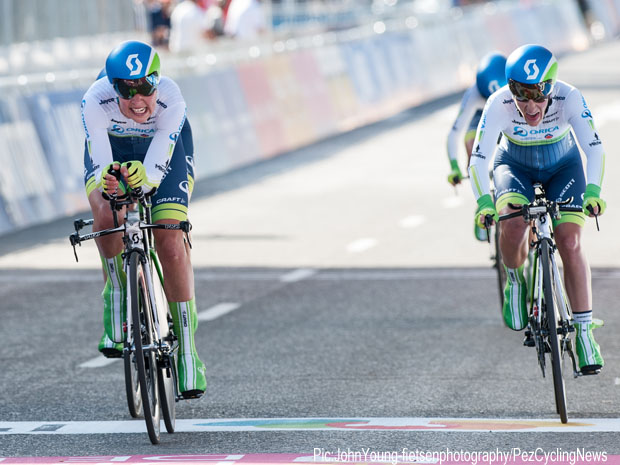 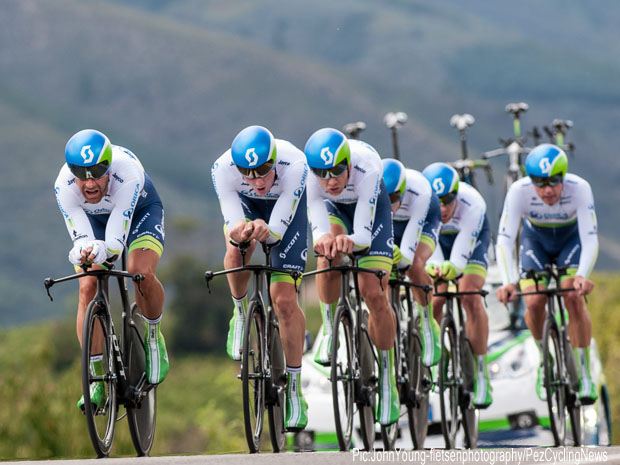 Elite Men’s Team Time Trial: But the boys do – mounted on the latest matt black ‘SR 71 spy plane’ Plasmas – but despite the hot hardware and beating double champions Quick-Step, the Australian team conceded half-a-minute to the BMC team and had to settle for silver, again. 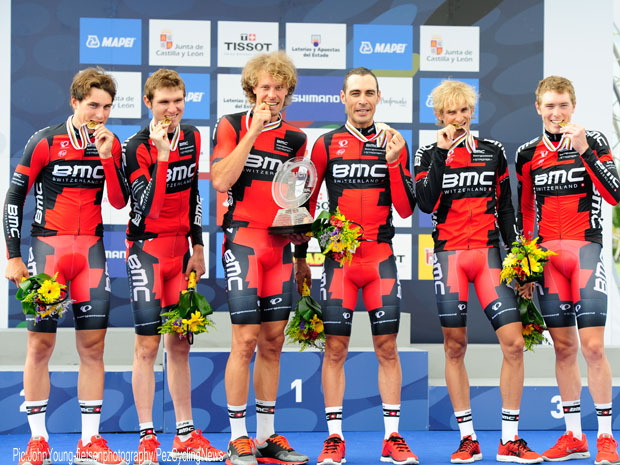 Silvan Dillier started season 2014 as a neo pro and finished it as a world champion whilst Messrs. Quinziato and Oss finally got some tangible reward for all that hard work they do throughout the season in the service of others. 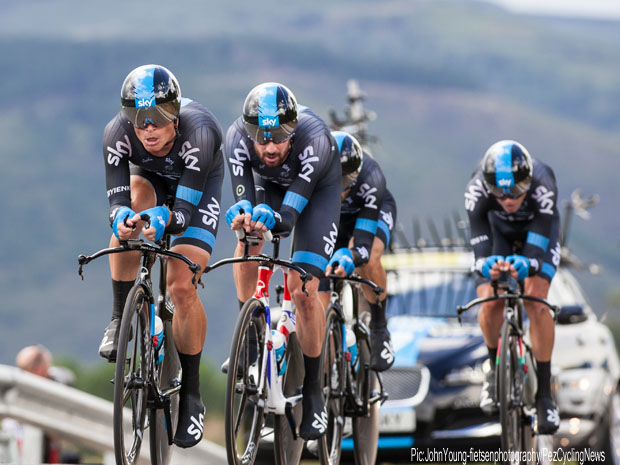 Rupert Murdoch’s boys went out quick and paid the price late in the day when, down to four riders they were shaded by Quick-Step for bronze by two seconds. Quick-Step in turn lost out to GreenEDGE by some four seconds, emphasising the closeness of the competition and the dominance of BMC with their 30 second plus winning margin. 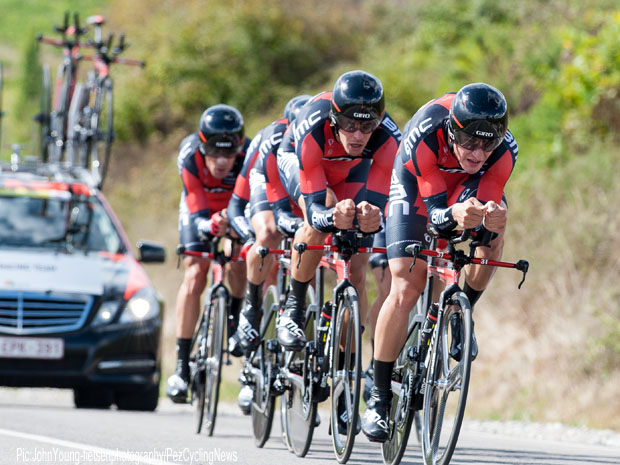 The US/Swiss team cut an impressive picture as they flew round 57 kilometres in one hour and three minutes – Silvan Dillier was putting out 1000 watts at some points in their effort. 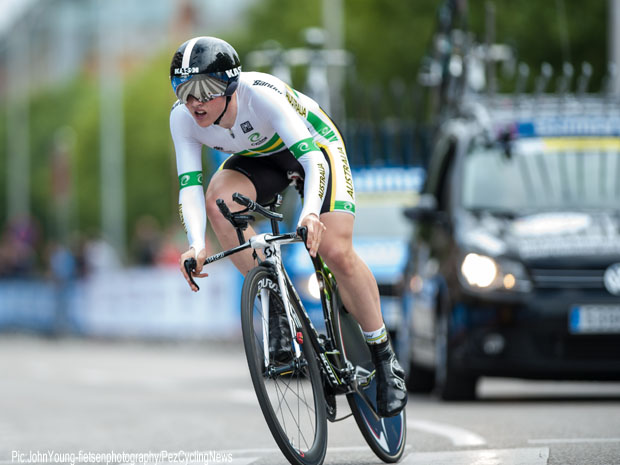 Junior Men’s Individual Time Trial: The Aussie watch factory continues to churn them out with Michael Storer taking bronze on yet another of those fast Plasmas. 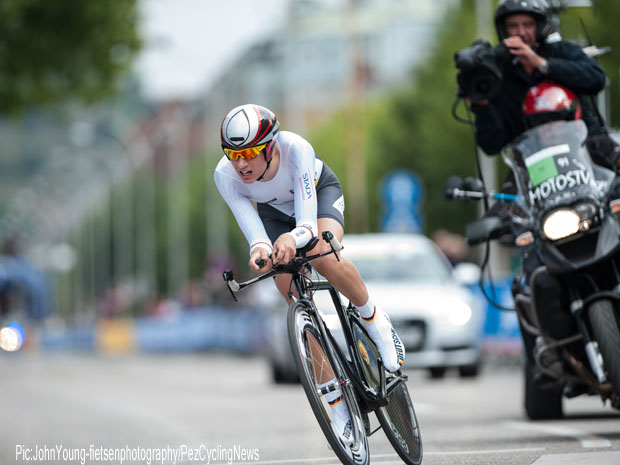 Winner Germany’s Lennard Kamna continued the nation’s tradition of strength against the watch; following in the footsteps of the likes of Michael Rich, Uwe Peschel and Tony Martin. Marcel Kittel also won this race – time will tell if Kamna can reach heights achieved by his predecessor. 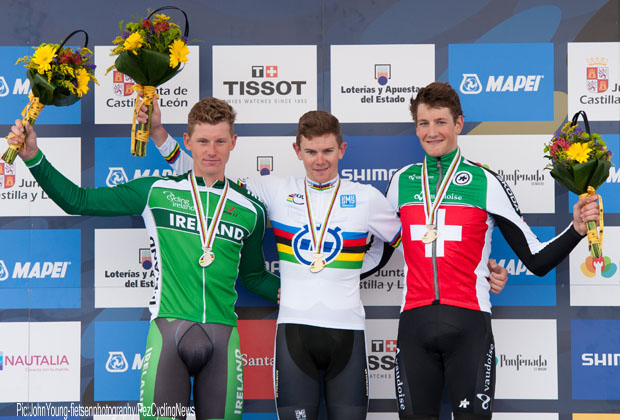 Men’s U23 Individual Time Trial: Two of the three nations on the podium, Australia with winner Campbell Flakemore and bronze medallist Stefan Kueng from Switzerland have strong traditions against the watch – but Ireland?

Ryan Mullen is the rising star of Irish cycling, beating the likes of Dan Martin to take the Irish road title and taking the Irish TT title for good measure – he lost the world title by less than one second. 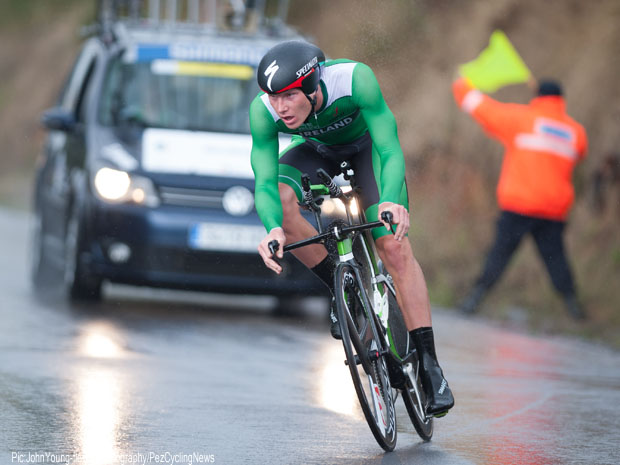 Those who saw the result of the British 10 Mile Time Trial Championship weren’t surprised by the Irishman’s ride – he lost out to multiple champion and record holder, Matt Bottrill by two scant seconds, covering the 16 kilometres in 17:42. 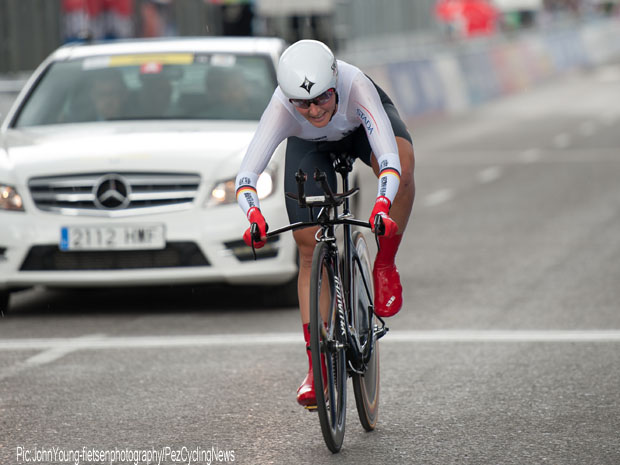 Elite Women’s Individual Time Trial: Lisa Brennauer took her second world title, to go with the TTT, in the individual TT, 19 seconds clear of the Ukraiane’s Anna Solovey, her success due largely to her last ten minutes of riding – as the others faded, she flew. 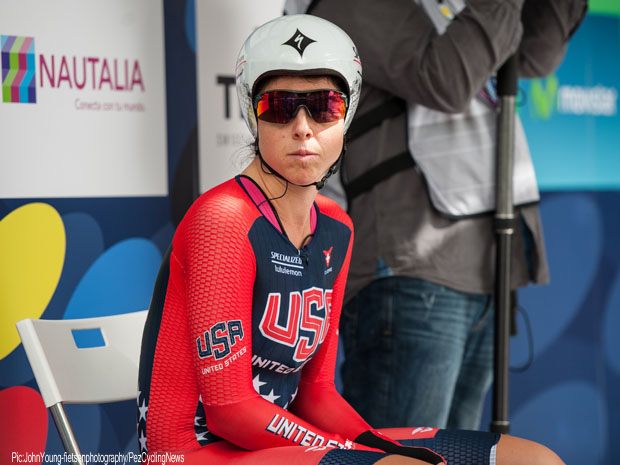 Elite Women’s Individual Time Trial: Evelyn Stevens of the USA has done things differently from most. Instead of moving from sport to business, she went from being a ‘Mistress of the Universe’ on Wall Street to a full time bike rider. With gold in the TTT and bronze in the iTT it wasn’t a bad week’s work for the lady. 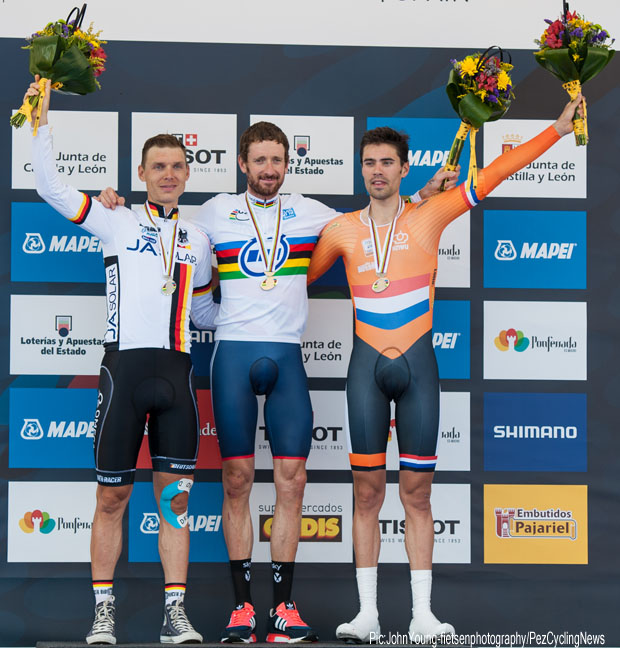 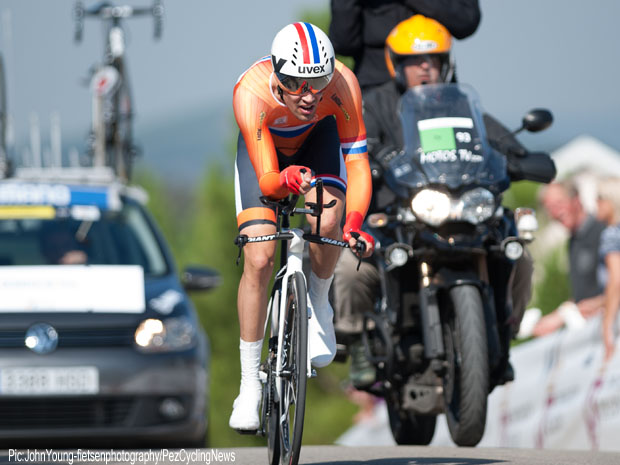 Is Dumoulin the man to overthrow Martin as Chrono King? We think not just yet – but he’s on the way up for sure with wins against the watch in his Nationals, Criterium International, Alberta and Eneco Tour. 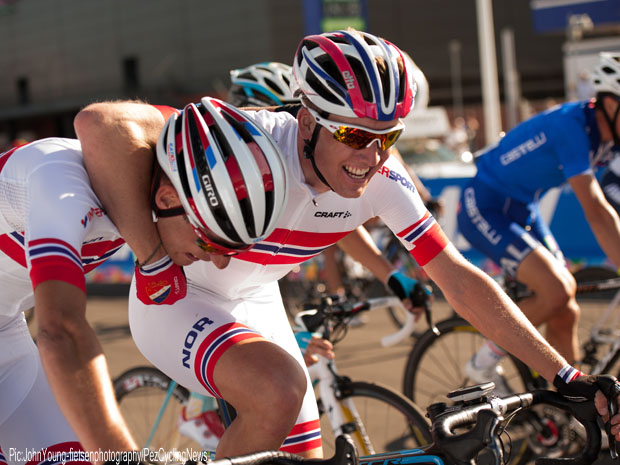 Men’s U23 Road Race: Thor may have called time but Kristoff is rampant and these two Vikings could well be the next two to pillage their way around Europe, Messrs. Bystrom and Skjerping first and third respectively in the U23 road race. 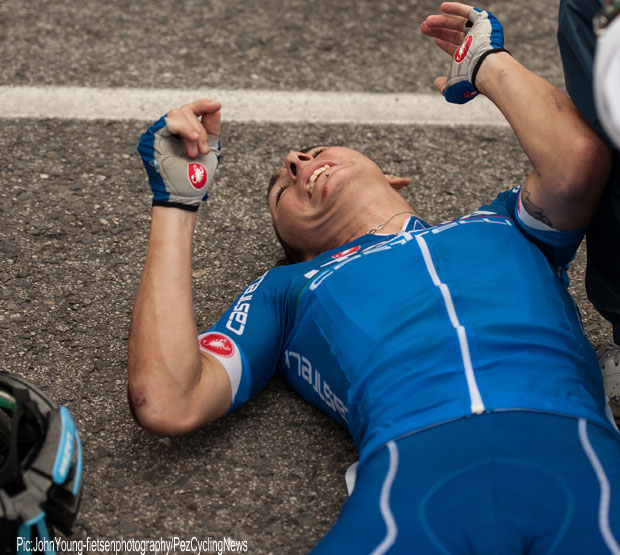 Elite Women’s Road Race: Former champion Georgina Bronzini crashes after finishing fourth in the Elite ladies race – it wouldn’t have hurt so much if she’d taken that bronze. 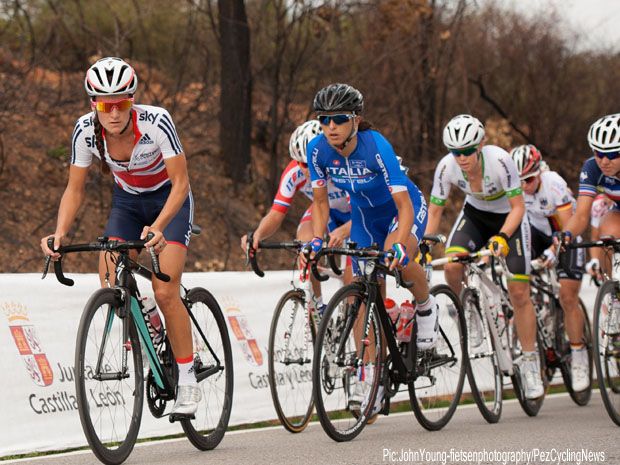 Olympic silver medallist in 2012, the 2014 World Cup winner and Commonwealth Games Road Champion Lizzie Armistead wanted to win this one, bad. She was clear in the finish straight with three other girls but they all sat up, looked at each other and were washed away by the peloton – it’s a funny old sport . . . 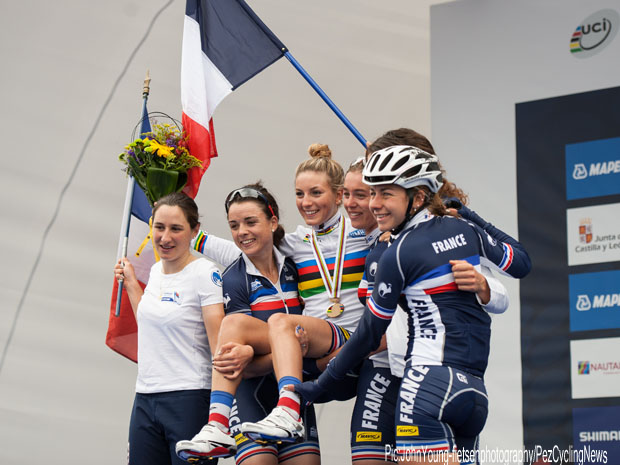 And just to cap the day for France after Pauline Ferrand-Prevot’s win, they picked up their World Cup nations team win award, too. 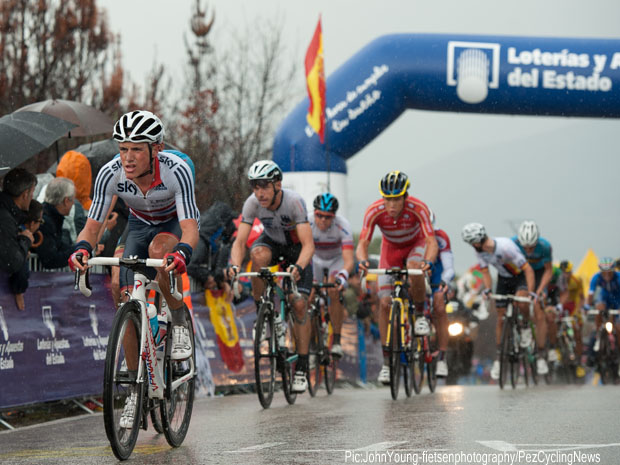 Elite Men’s Road Race: He’s had to live with the ‘Next Englishman to win the Tour?’ magazine headlines for a year or two now – but despite that he’s coming along nicely. This year he’s won the Coppi e Bartali, Tour of Austria and British Elite Road Race Championship. In Ponferrada he should have waited – the race is always the last lap – but his aggression against the best in the world was refreshing – he can win a Classic. 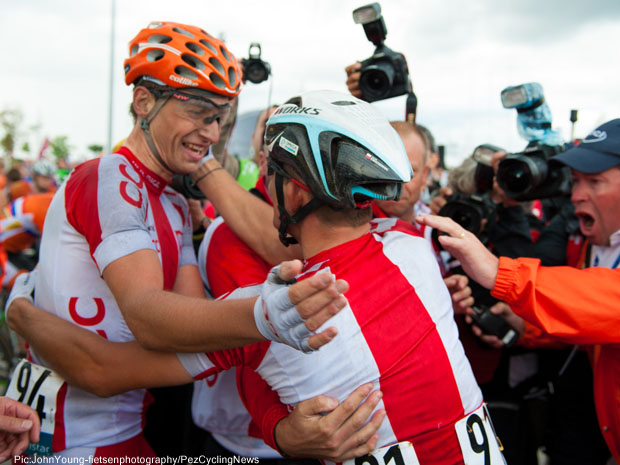 We’ve seen plenty of pictures of the front of World Elite Champion Michal Kwiatkowski, here’s a rear view as he reaches to cuddle teammate Maciej Paterski – and so he should, his team did him proud.

Perhaps not the bonniest venue ever for the Worlds but the racing was great and the champions worthy – and that’s what counts.

See you in Richmond?

Sidi Sport: ‘From Head to Toe’

CYCLE TO… Launches Tenth Anniversary of CYCLE TO MIPIM