With the “Best” also come the “Worst” – Rides of the Year that is. The PCN panel showed up (as usual) with the full round-table of ideas & opinions, but one rider came out on top as a clear winner – of the losers… Almost unanimously was Tyler Hamilton’s Giro. Yes – he finished second as his own boss in his first Grand Tour – an admirable feat indeed, but we’re not the only ones thinking he could have won that race with a few less crashes. Gotta keep the rubber side down… 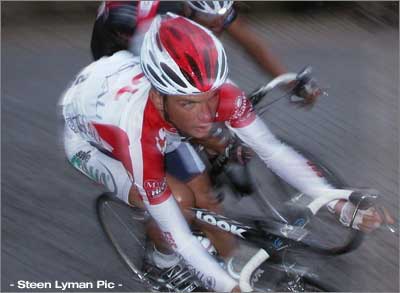 Daimeon
“Worst ride of the year? Sorry Tyler, even though you have what it takes to be great, as a good friend keeps telling me, “you can’t win a stage race with those sticky bandages all over you!” Why does he keep crashing? It’s almost as painful to watch as Ben Stiller in “Meet the Parents”…”

Stephen
“Tyler Hamilton always managing to find a way to crash spectacularly in every Grand Tour.”

Finishing in a solid but distant 2nd place was David Millar’s Vuelta protest/retirement/expulsion. For sure one of the most colorful riders in the bunch – not to mention talented – we really do want to see you win and just can’t stand to see you miss out on opportunities to join the history books under “winners” – not “whiners”. 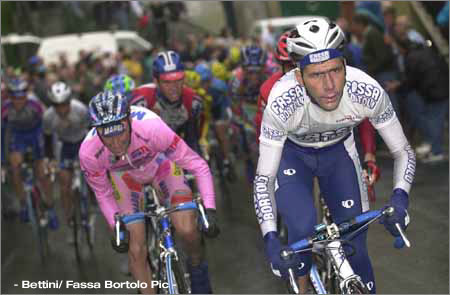 Gordon
“I would suggest Francesco ‘the Cyclone’ Casagrande’s boxing match against John Fredy ‘The Fearless’ Gonzalez in the Giro. Unfortunately, as his principal rivals fell by the wayside for a welter of bizarre cough-sweet related reasons, Francesco took the Colombian’s challenge too seriously. His DQ for leaving his opponent bleeding on the deck cost him a glorious chance to win a Giro denuded of Simoni, Garzelli, Pantani, Ullrich.”

“For back-ups, VDB’s ill-advised training ride with Nico Mattan, when he should have been at home heading off the sheriffs at the pass??”

“David Millar’s protest – a brave but misguided challenge to authority. A major star and team-leader climbs off on the finish line in a fit of temper – and cycling wonders why sponsors get hacked off?”

Eric
“Worst ride but w/o great consequences is Millar’s abandonment in Spain and the associated
excuses.”

Michele
“Kaiser Jan. The German rider started very early to ride and everybody was thinking about a good season, better than the recent years. But he had hi problems (car crashes, knees, nite clubbing) and then he didn’t return to racing for the whole year. Telekom left him, and for my opinion, Telekom is nothing without him.”

Alastair
“It has to be that tosser David Millar’s ride in the Vuelta, the conditions were the same for the winner and the last man on the race, he knew the route before the start, so why turn up? He just showed he is an immature rider, who will not amount to much, just like that softy Boardman before him. Lots of talent, no head.”

Robert VW
“Ouch… the whole mess-up in the Giro d’Italia again…dirty, dirty. Gilberto Simoni out because of what??? a dentist’s mistake??? Garzelli definitely positive, taking Mapei with him… Casagrande out for punching someone on the head, man we should forget about this one despite Savoldelli’s deserved victory!”

Campyman
“Worst Ride of the year. Tough one, David Millar, protesting and getting tossed out!”

Pantani To Lead Out Cipo?