The ATB Tour of Alberta might be one of the final UCI races for many of the participating teams, but it was by no means a “farewell tour”. In fact, the race was as aggressive, even more so on occasion, than the Tour de Taiwan and Tour of Utah, both of which were hotly contested every kilometer of every stage. 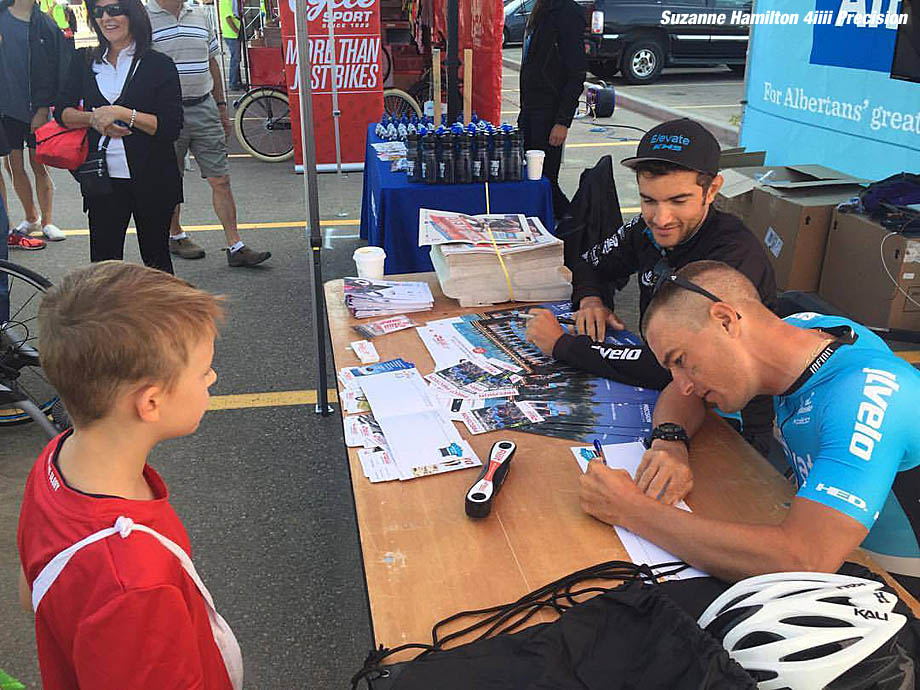 At the Tour of Alberta our Elevate/KHS Pro Cycling Team did a daily autograph session with 4iiii Precision, the maker of our power meters. What a great way to meet fans of bike racing in Canada!

Having been to Canada only one other time before the ATB Tour of Alberta, I was excited to experience all that an American bike-racer could while in the Great White North. Although my time outside of the races was very limited, I was humbled by the kindness and welcoming nature of my Canadian hosts as I journeyed through Alberta. But what about the racing? That’s what this diary is about, right!? Yes, the racing was very hard, just the way I like it!

Stage One was a brute of stage that featured a short neutral section as we left the mountain town of Jasper on a route that included three large loops each punctuated with a 5min. climb that felt like a kick in the face. On the first ascent of the slope my climbers were out of position and missed a sizable break-away. Our mistake would lead to the Elevate/KHS team being on the front (with help from a few other teams) for 3.5hrs in a full-on chase to make matters right.

It was our responsibility to bring the back break-away as we had full faith and confidence that our climbers James “The Cagey Canadian” Piccoli and Eder “The Mexican Mustang” Frayre could position our team at the top of the General Classification on the final 10Km climb to the Jasper Ski Resort. Unfortunately, despite our teams’ effort, along with the help of the H&R Block and Silber Pro Cycling teams, we could not bring to heal the final five remaining break-away riders. All others were scooped up, but the race winners could not be brought back. In that 3.5hr chase, there were various ‘gut check’ moments, as I like to call them, for me and my boys. By ‘gut check’, I mean those moments when you find yourself questioning why we sign-up for this type of torture, when you have emptied the tank and have to find more to continue because there is still work to be done.

These are the moments when you must connect with your belief in team goals, and rally to complete the mission we set out to accomplish. These are the moments I love because it’s when I know why we push ourselves so hard! I am pleased to report that although my boys and I were suffering badly, everyone poured all of themselves into the chase, and we gave our climbers the best chance we could have going for the stage win. Although I was completely spent once the grouppetto formed on the 10km final ascent and I needed a few moments to gather myself before talking. I was proud to tell each of my guys, Nick “T-Rock” Torraca, Alfredo “The Mexican Lion” Rodriguez, and Connor “CB” Brown that they did a helluva job! 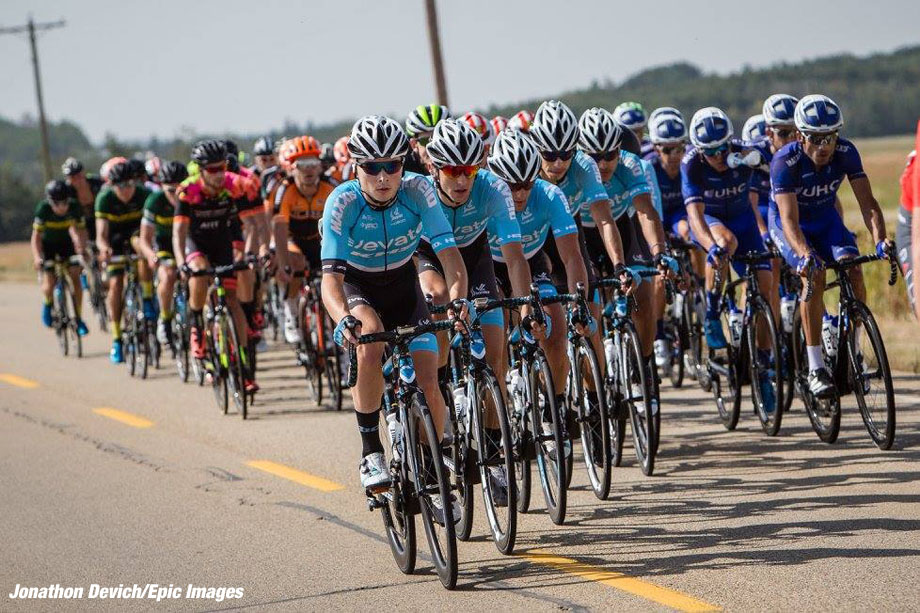 The cross winds on Stage 2 made staying together as a team even more important than normal. We organized our own echelon to shelter our contenders from the wind

It was a brutal chase, that resulted in our Cagey Canadian (James Piccoli) getting 10th on the stage, a solid result, and one that we could all be proud of. In Stages Two and Three, and after such a high workload on Stage 1, you could forgive the guys for wanting an easy day, but that’s not how we roll at Elevate/KHS Pro Cycling! We came to the ATB Tour of Alberta to ‘swing for the fence’ and make our mark on the race. With that in mind we had three or four riders hunting for the break-away on each stage.

On Stage Two, despite a full-day of cross wind it was a field-sprint. After all the attacking and counter-attacking we got together to lead our Mexican Lion (Alfredo) to the front of the group for a ‘crack’ at the sprint. As one of the best sprinters in North America, we had full confidence that our Lion would roar at the end of the stage. Unfortunately a crash by another sprinter in the final meters of the stage forced Alfredo to pause his sprint, meaning he could only garner fifth on the stage. Luckily everyone who went down in the crash was ‘ok’ and could keep racing. For us the best news was that Alfredo’s quick reaction time helped him avoid the crash altogether. 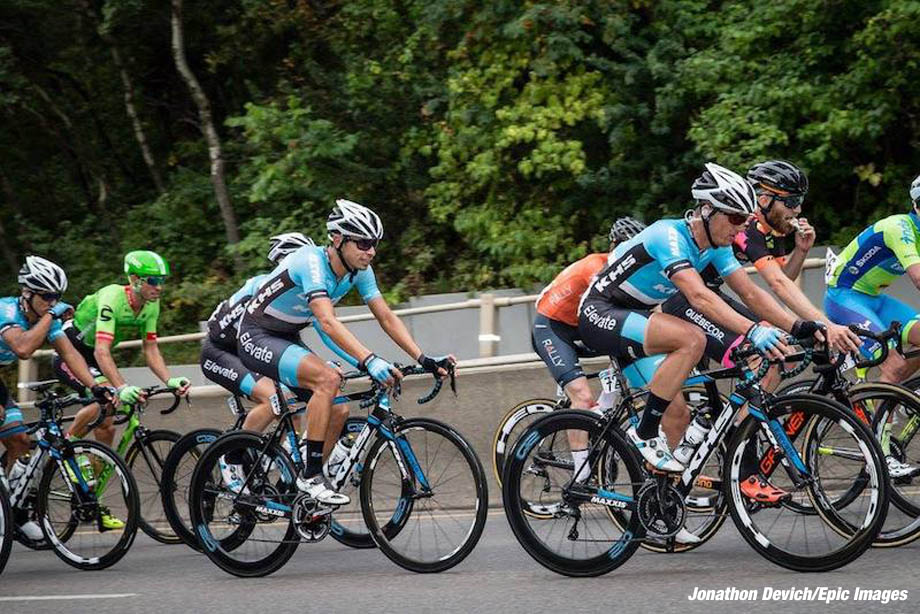 The Stage 3 circuit race was another windy, aggressive, and brutal day in Alberta. We looked after James and Alfredo throughout the stage to give them a chance at winning the stage

Stage Three was another aggressive race that saw us trying to put someone in the break-away, then set-up Alfredo for the sprint. Despite a finishing punch that made the sprint more suited to a climber who could sprint, James and Alfredo fought it out for the best result possible.

The Final Stage featured two big climbs amongst a twisty downtown Edmonton circuit. This course was very challenging and one we were excited to race on! All our hard work came together on this day seeing Connor and Nick make the stage-long break-away.

In the field, Eder and I looked after Alfredo and James, positioning them well going into each climb so that they could be as fresh as possible for the final sprint. This stage too, was destined to be a sprint for a climber with a kick, which left Eder and James racing for stage glory. After a big attack in the closing laps, that sent alarm bells off in the peloton, James still had the legs to help Eder earn a top-10 finish on what was a very difficult stage finish.

All in all, the ATB Tour of Alberta was an incredible event. Being only four stages, the casual observer could be forgiven for thinking it would be an easy race. Alberta proved to be four hotly contested stages in every competition, the KOM, Sprint, Best Canadian, and General Classification. Although we did not earn the results we set out for, there is so much positive to take-away from this race, one of which was more time learning about our incredible 4iiii Precision Power Meters. As a Canadian company they organized an expo booth for fans every day of the Tour, which featured two Elevate/KHS Pro Cycling team members signing autographs.

Those autograph signings were so much fun as the Canadian fans are some of the most enthusiastic cycling fans I have ever met! From that experience we met many people that love bikes like we do, making it a part of their lifestyle and fitness routine. As ever, I was humbled by this experience, the beauty of Canada, and the kindness of the people I met during our time at the ATB Tour of Alberta. 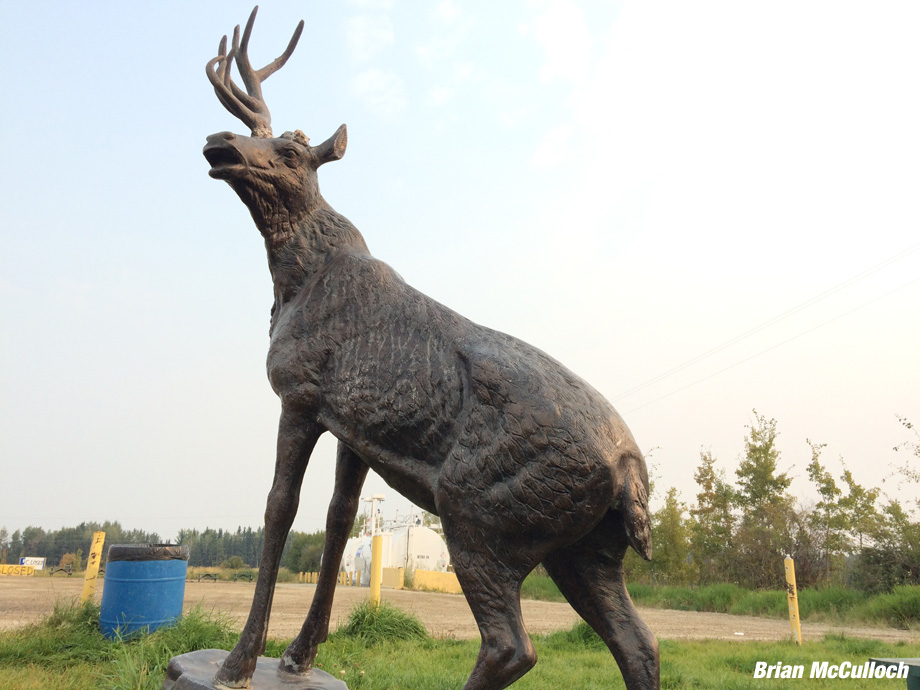 I had heard that everything in Canada was big, especially the wildlife! Unfortunately, this bronze one-horned Elk was all that I could find as proof that the wildlife is large and in-charge in Alberta

I am thankful to Xpedo for giving me the opportunity to share this experience with the audience of PezCyclingNews and thankful to all the sponsors of our Elevate/KHS Pro Cycling Team for their generous support. None of this would be possible without their belief in our team’s ability!