Xpedo Rider Diary: The 2017 Tour de Taiwan was my first trip to any Asian country, not just to race my bike, but ever. So you can guess that I was more than excited when I received a call from my Team Manager, Paul Abrahams, telling me I was selected for our Tour de Taiwan roster.

— By Brian McCulloch: My First Trip To Asia —

Besides being my first trip to Asia, this was the first international race for my Elevate/KHS Pro Cycling Team. As an original member of the team (I signed for them way back in 2011!), I have been a part of many milestones for our team and felt privileged to be making this step into international racing alongside my teammates and our incredibly supportive staff. 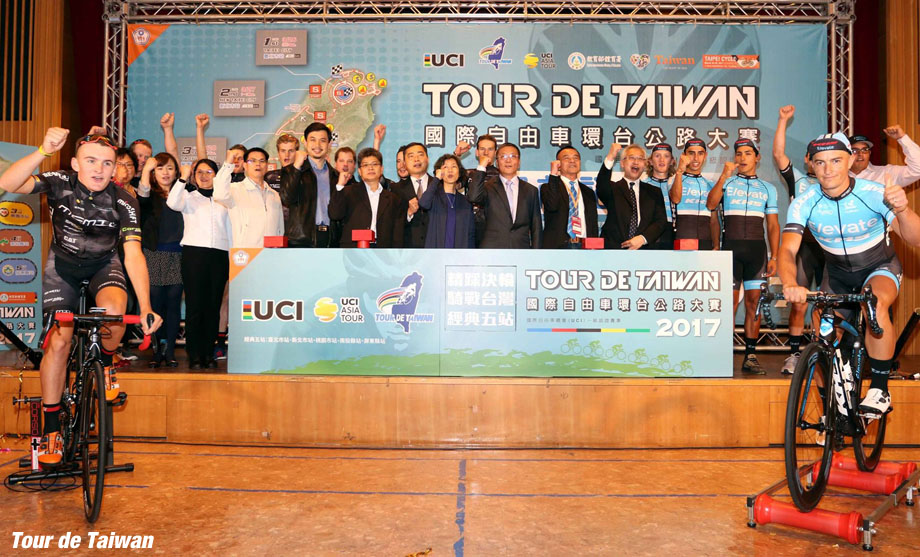 Don’t try this at home! Riding one-handed on rollers with a confetti cannon in the background is something that should be left to press-day.

The Press Conference: Fanfare On Another Level
The day before the race commenced we were included in the Tour de Taiwan Press Presentation…And what a presentation it was!

When the boys and I showed up we were guided to a room to change into our team clothing before joining the Press Presentation. From there, we stepped into an auditorium full of press, dignitaries, event sponsors, and race staff all excited to celebrate the kick-off of the 2017 Tour de Taiwan.

For me the highlight of the Press Presentation was the grand-finale that featured our team, all the event sponsors and dignitaries, and another team, Memil Pro Cycling all on the stage for a photo. The comical part, was being on my bike, on a set of rollers on an open floor attempting to ride, smile for the cameras, and dodge the confetti cannon that exploded from behind me!

Although I was warned that this confetti cannon would go-off, the explosion surprised me so much that I just about fell off the rollers to seek shelter! Apparently my startled facial expressions lead to some funny photos…

Stage One: A Rain Soaked Circus
The opening stage of any race is going to be hectic, you have 150-riders that are ‘fresh’ and looking to make their mark on the event. The Tour de Taiwan was no different, add to that energy a flat, wet, route and this stage was sure to demand full-focus for the entire 84km.

Although it was a very aggressive race with riders attacking and counter-attacking with full ferocity, it was destined to be a field sprint. The ensuing battle to set-up a lead-out for each teams sprinters was chaos, but we were able to help Alfredo Rodriguez navigate the chaotic finish to earn a hard-fought seventh place, despite various crashes in the final 500m of the race. 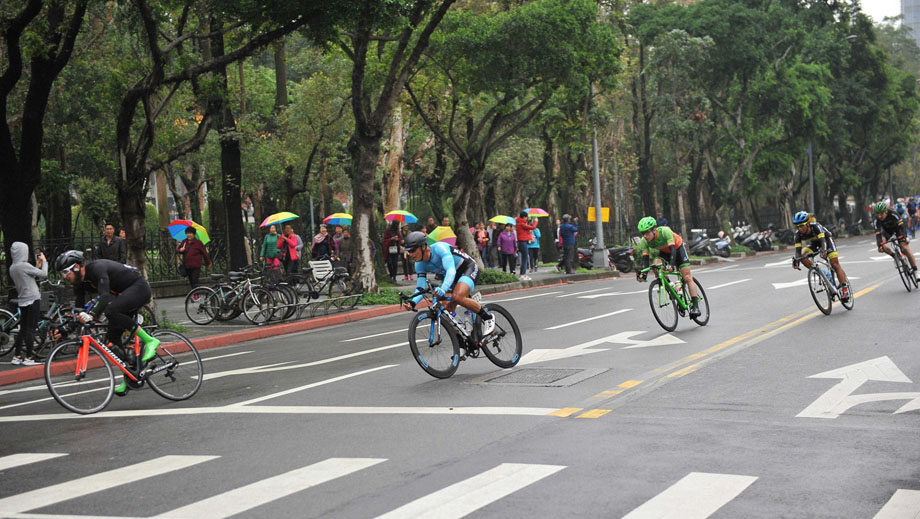 A wet circuit course made for a fast and challenging stage 1 of the Tour de Taiwan. Our team was well represented in any of the break-away attempts, but it was always destined to be a sprinters day. Luckily we have Alfredo who avoided last corner carnage to earn a great top ten placing! 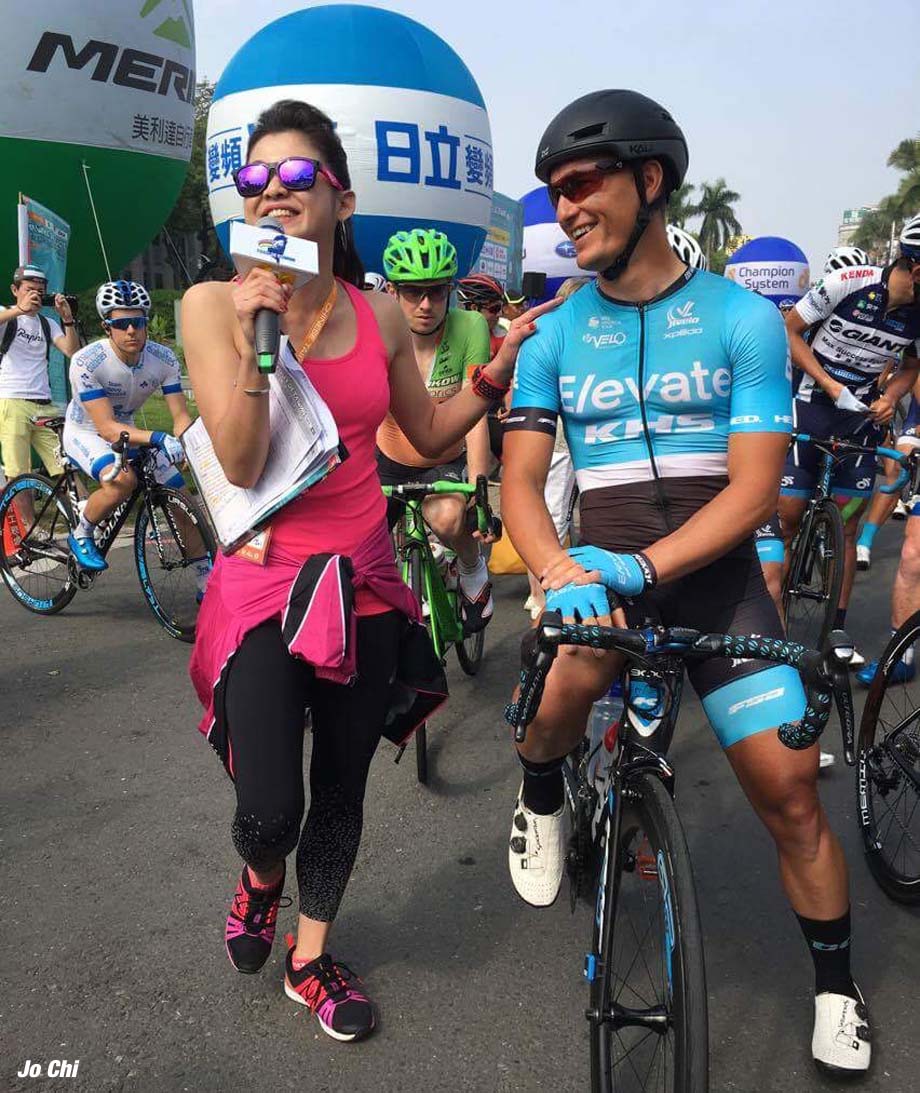 Our Elevate-KHS race team was introduced to the crowd at the start of various stages of the Tour de Taiwan. In anticipation of this my teammates and I learned as much Taiwanese as we could so that fans could understand us. When asked, I told the crowd “I love Taiwan, I love you fans, and I love KHS!”…in Taiwanese of course!

Stage Three: Beauty On The Climbs
Stage Three of the Tour de Taiwan was the first of two that would finish on a climb. With two handy climbers, Eder Freyre and Alex Hoen in our squad, we were motivated and excited to give our guys a crack at the finish.

The final 70Km of the stage were all uphill, but the real fight for position started with more than 20Km to go. After doing my work to help Alex and Eder start the final climb in the front, I was dropped from the lead group and arrived at the finish to hear that there was a small group of 15 or so going for the win when one rider lost his front wheel in the final turn. Luckily Eder was able to maneuver around the downed rider and finish in a very strong 7th place, not quite the result he was looking for, but still a solid ride. 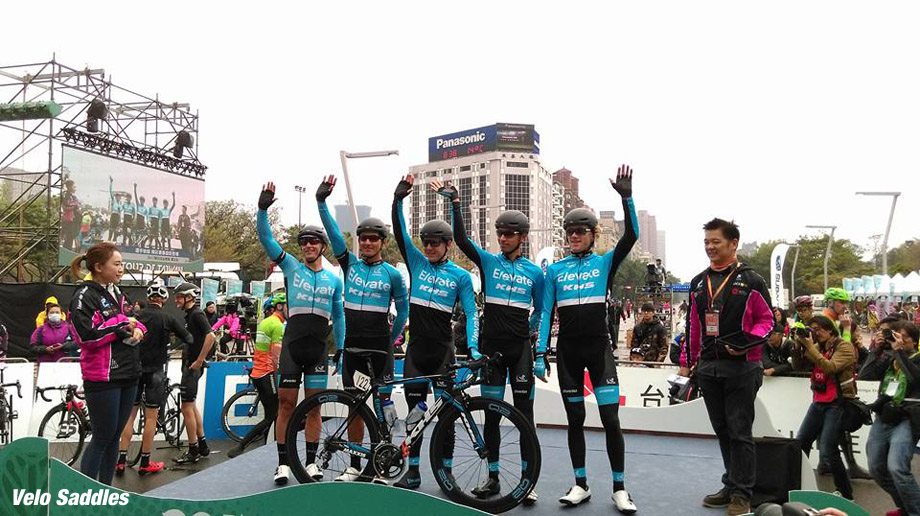 The calm before the storm, getting suited-up before and heading to the start of the final 5.5hrs of racing of our Taiwan trip

Stage Five: The Breakaway!
At just shy of 200Km the final stage of the Tour de Taiwan would be the longest of the race, but only in the break-away would it be one of the hardest…

Our race-plan for the day was to ensure we had someone in the break-away and then the remaining teammates (not in the break-away) would support Alfredo for his chance in the event of a field-sprint. The race started very aggressively, which we were excited about. Each of my boys Schmalzy, Aflredo, and Eder (note: Alex had abandoned the race following a crash on Stage 4) were covering moves with all of us taking turns to ensure we would be in the break.

Once the break-away formed and the field lost its desire to chase, I was solidly placed in the group of seven riders off the front. Our de-facto team of riders worked well together initially, but that cohesiveness gave way to in-fighting leading into the first sprint point of the day at 80Km. Following the sprint point, our break-away would split-down to three riders, myself and two others that would then ride into the final kilometers before being caught by the chasing field.

I loved being in the break-away and having the opportunity to work hard for over 4.5hrs in the warm, humid, and windy conditions, it was what I had come to Taiwan to do!

Although ‘selectively’ throwing water bottles is an acceptable part of racing, in Taiwanese culture, they are especially sensitive to refuse on the roads. Thus, when I returned my bottles to the Team Car for an exchange it gave Race Commentators a lot to talk about, so much so that our KHS liaisons from Taiwan thanked us specifically for this after the race. How cool is that!?

The bonus was finishing the race and hearing that Aflredo sprinted to 5th place on the stage, a great ride by all accounts by our 19-year old sprinter!

Conclusion: Looking Forward To The 2018 Tour de Taiwan
The whole race experience of Taiwan was incredible, from the roads to the scenery, but what made the biggest impression on me was the kindness and generosity of the Taiwan citizens. Our translators, tour-guides, race-officials, and Elevate-KHS fans were all friendly and helpful beyond my expectation.

To say that I am already looking forward to the possibility of participating in the 2018 edition of the Tour de Taiwan is an understatement!

In closing, I would like to say a special “THANK YOU” to Xpedo Pedals for the opportunity to share my story about the Tour de Taiwan! I would also like to thank all our Elevate-KHS Pro Cycling sponsors for making this trip possible, especially our Taiwanese-based partners, KHS Bicycles, Maxxis Tires, Xpedo Pedals, Velo Saddles, Full Speed Ahead-FSA, and EVA-Air for going above and beyond to give us every opportunity for success at the Tour de Taiwan.