The PEZ Carrier pigeon just flew in from Switzerland – (and boy are his arms tired – badum-chh!) with the latest from snow-bound PEZ-man Flo Wenk. Our original German correspondent continues his studies in sports medicine, and but finds that being winter in Zurich has some benefits…

For more than 3 weeks now, it’s really winter in Zьrich. First, I could enjoy it – thanks to my battery-powered warming soles (which were very expensive, so that I will have to wear them the whole year to make them worth the money!) -, riding through a completely white landscape around the Lake Zurich with floating sunshine. Then, about 10 days ago, things changed. Since then, central Europe has been covered by snow, causing chaotic situations on roads and airports regularly.

For a cyclist, this means better not to get on his bike outside, if you can’t even walk without slipping… So my bike has to stay inside – and I become very envious when I see my friends heading to the south, covering many, many kilometers on their bikes and even getting the first sun-tan of the year (as it should be)!

This weekend, I decided to do some sight-seeing around Zurich and get some photos for my Pez articles. But not the city centre or the snow-covered surroundings were the most interesting objects – in fact, I went to an exhibition on the development of sports equipment.

There, a really big section was dedicated to road cycling, with a history of gear-shifting: starting from a fixed-gear bike, development went forward to – how cool! – a 2-gear-bike in the late 19th century, where you had to set the chain manually to another chainring! To me, this shows the true worth my 20-speed Campy system, which let’s me shift from one to another gear within a part of a second.

The exposition also showed the development of carbon frames from the Colnago C40 (one of the very first carbon frames on the market) to Lance’s Trek bike up to some very current racing machines. Another section gave insight into the techniques Swiss manufacturer BMC (ridden by the Phonak team) uses to plan and build their BMC “Team Machine” time trial frames with their outstanding and very characteristic tube shapes.

My Late Start
Generally, I will have a late start into the racing season this year – again! As I plan to graduate within the first half of this year, there will be lots of studying work to do when I will head back to Germany at the end of March. But I’m looking forward to combine it with lots of kilometers on the bike, so that I can join the peloton right after my exams with a good form.

Until the end of March, I will continue my education at the orthopaedic hospital here in Zьrich. At the beginning of February, I left the orthopaedic surgery department and I’m now member of the medical staff team of the conservative (i.e. non-operative) orthopaedics, rehabilitation and sports medicine department. In its function as a Swiss Olympic Medical Center (SOMC), it cares for leisure sportsmen as well as for semi-professional and world-class athletes from all over Switzerland. 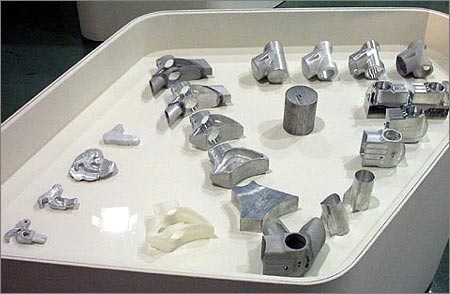 Part of the BMC display was this progression of lugs creation.

This way, I’m learning the details of sports medicine, especially examination techniques, diagnostics and treatment procedures. I’m absolutely enthusiastic about the work there (although my 11 hours a days only allow time to do a running session every evening instead of a long ride), it’s definitely the profession I would love to work in as a physician later! I’ve also noticed the value of endurance sports, as you can’t imagine how many (traumatic and partially severe) health problems occur in athletes from contact sports such as soccer, ice-hockey, downhill biking or wrestling.

I also had the chance to listen to a great lecture on how to use lactate as a prediction for endurance performance (a method I am still sceptic about as I preferred ergospirometry in the past). I will let you know how it works in 2 weeks time, presenting a “case report” (on my own tests) exclusively for Pez!

So stay tuned and keep spinning your legs!

Florian is an amateur road racer and PEZ-Man in Germany, studying medicine at the University of Wьrzburg. He’s currently doing his Ph.D. in endurance training and testing, focusing on metabolic and ergospirometric parameters in cycling performance. Right now, he is in Zurich, Switzerland, completing his final year of studies at one of Europe’s biggest orthopaedic hospitals. You can contact him via [email protected] or have a look at his website www.florianwenk.com