What seems like centuries ago, I was tooling around Interbike, desperately trying to find something that wasn’t a rehashed technology. If you’ve ever had the pleasure of hitting up this “festival”, you will understand how truly difficult the task is… I thought for sure I would find something from the depths of the importers area and as I searched high and low, I did find a few things that were really “neat”. Then, while on my way from Italy to Taiwan (in a space of a few hundred feet), I came across a group of unbudging people. What shocked the crap out of me was that they weren’t gathered around the latest creation from far off lands, but around a group of guys that build bikes in the same damn part of Arizona that I live!

Just on principle I was gonna walk away, because as a poseur extraordinaire, I have a 4,000 mile minimum requirement for product origin before I feel it “worthy” (yes I have changed my ways after I found out more about products from American Classic, Trek, Parlee and Cannondale). But as I started to leave, I noticed that the Ti tubes on the bike everyone was humming about had something strange about them. And after a quick couple of minutes, I knew I needed to get into the shop at Titus to see what I could see.

Titus started in 91’ as a full custom Ti shop. Back at that time, there were a few other folks knocking out Ti, but as some of us remember, even the good shops building Ti had not done enough work to know how to keep the things less noodly and in larger sizes maintaining stability. They were on the front edge of using different Tube Diameters and wall thickness to start to bring Ti into the wonder material that it is today. They have continued to learn and now offer more than 50 – THAT’S FIVE ZERO – different diameter and wall thickness combinations throughout a frameset to get you where you want to be. Lots of high end manufacturers offer you a degree or two of geometry change and call it custom. Titus is just plain obsessive (in a good way) about it.

Every custom bike that comes through has a reminder for the builders that they are serving a person rather than a PO number.

But what impressed me is that everything was handled the same from these guys. Stock or custom, the same folks build each bike as if it were the last thing they were going to do before they die. You could see that attitude everywhere you looked. This isn’t a manufacturer, they are a maker, and it was easy to see…

Walking through a very clean shop, I noticed how tight the tolerances were on a custom ride being prepped. Machines knocking out thousands of tubes at the same angle can get pretty close tolerances, but to the have tolerances that I saw on a custom bike is something special. I have been in a couple of the big Ti houses, and while they are great builders as well, I simply didn’t see cuts like these (note that my visit was unscheduled, so this wasn’t a “setup”…). I have owned both a Merlin Extralight and Litespeed Palmares and I would say that during build and with the finished product, Titus is not satisfied with simply building a bike on par with the two big boys. With the tons of custom options and the attention to detail, if I was to buy a top end Ti bike, I would buy a Titus. The fact that I can get a Ti bike (Full Custom Racer) with 50 tubeset options built to perform the exact way I want, and do it for the same (or less) that an off the shelf rig is just to big an advantage to Titus. 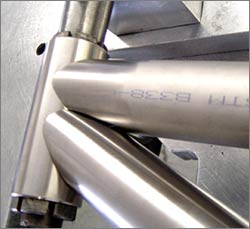 This is as good a joint as is humanly (or machine…) possible.

There are also some special little things to look for when Ti and Aluminum are being welded. The metal will turn certain colors, some good, some bad, that you can look for. There are only a few degrees difference in too hot, or cooled to fast that mean slight (or sometimes major) differences in longevity. I was looking at great welds, and the one I saw that I didn’t like was in the trash… No explaining, or big deal was made of it, it was just something I picked out as I walked through. If it’s not up to par, these guys don’t just paint it and send it out (aluminum), they scrap it… (note, the mistake was only on a very small part of the weld as well (had I not reached in and pulled it out, I would have missed it.)

Titus makes their Full custom Ti bike and also builds an Aluminum frame called the Drop-U, a super rig out of 6069 Aluminum that is light like most Aluminum frames, but also pretty damn durable as far as Alu goes (it’s not a one season and done from like most at this weight). But the cream of the crop was stopped me dead in my tracks at interbike. 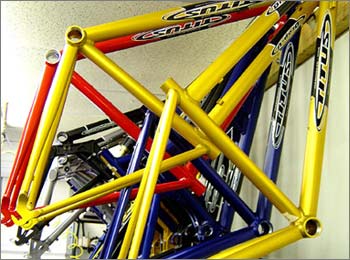 The Exogrid and Isogrid frames made from Ti and Carbon. The Isogrid is a Ti lugged ultra light (a hair above 2 pounds) and it uses technology that is far and away beyond what is going into most tubing now. The Exogrid is just plain PSYCHO! And their Carbon isn’t just your everyday bladder blown carbon, but contains an interior structure that represents a huge step up in technology that not only makes the material stronger, but can change the characteristics and performance of the tube beyond that of simple fiber direction configuration that most other folks think is state of the art… 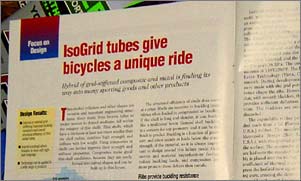 The stuff is so special, Non industry magazines are calling it a revelation…

Here is a tube set that is not only made of the two most desirable things in cycling at once, but because they can control the grid (little checkers) size, shape, location and quantity, they can basically tune the tube set to do exactly what they want.

You want compliant up top and stiff as a board in the BB? Maybe you want just plain stiff all over? Maybe you’re a big guy and want something extra stiff up top for stability, but a compliant feel. This isn’t a do some things better and some things worse tube set, it’s a do it all better tube set. It is quite simply the most advanced tube set available for a bicycle (or damn near any performance machine) available today. 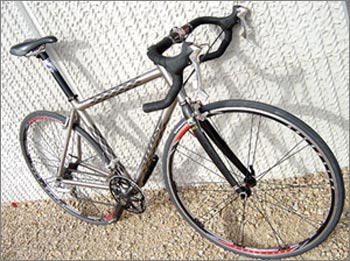 We just don’t have the room left to do a review on the bikes here (especially the Exo) so we will follow up with a story on the end use performance suffice it to say that the performance is a better story than the Factory tour is… As is the case with all things, every battle is won or lost before it is ever fought, and Titus has such a strong foundation that I would imagine that anything I get a leg over will absolutely stomp ass!