We recently published a review of the Trek 5900 – their top-‘o-line carbon speedster, and the primary road bike supplied by Trek to the US Postal team. The bike I reviewed was the standard issue 5900 from Trek, and although “sweet as can be”, it’s slightly different from the bike that you’ll actually see Lance and the team riding. Here’s a quick look at some of the differences…

From time to time you’ll find a new part or component you haven’t seen before, simply because the bikes are also test-beds for new stuff that often finds its way into production and onto your dealers shelves as next year’s models. 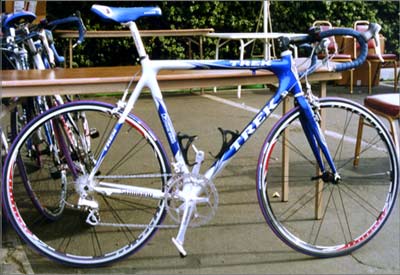 Frame & Forks – Trek – www.trekbikes.com
Trek provides frames for all US Postal’s road racing activities. This includes road frames – the fully carbon and the “isn’t she lovely” 5900 that we reviewed here (include link). I talked in with Trek Project Engineer Mark Andrews who knows the team bikes inside and out. The team is supplied with a two framesets, the 5500 and the 5900. Generally each rider gets a 5500 training bike and race bike. The 5900 frames are mostly reserved for the team’s climbers, who want an extra edge when the road turns uphill. The 5900 is the lightest of the 2 frames, due to it’s 110 Carbon construction, being lighter than the 120 OCLV used on the 5500’s.

Oh, and Mark mentioned the Team Issue bikes each are delivered with an aluminum number hangar already attached under the front of the top tube.

Trek also supplies the team’s Time Trial bikes, which were initially custom designed around Lance’s build, which has become the “medium” size, but the team also gets a few small and large models for the other guys. It’s the same TT frame and fork you can buy. 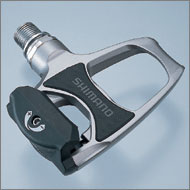 Components & Pedals – Shimano – www.shimano.com
Another cool thing about road racing is that unlike other elite level sports, us everyday Joes can pretty much acquire the same stuff used by the pros. The Team Issue 5900 comes equipped with the same Shimano seatposts, shifters, derailleurs, cranks, pedals and bb’syou can buy. According to Shimano, the team runs Dura-Ace “Team Edition” components which have been available to the public for three years now. Nothing different there that any Lance fan can’t get, too. In fact, the only difference – and there is one – is that the Team Issue seatpost, levers, and cranks come branded with a “Shimano” logo instead of a “Dura-Ace” logo. That’s it. 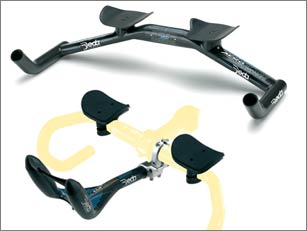 Bars, Stem, bar tape – Deda Elementi -(www.dedaelementi.com)
Perhaps the first thing you’ll notice should you be lucky enough to swing a leg over an actual Team Issue bike, is the handlebars and stem. Although the stock 5900 comes equipped with Bontrager bars and stem, the Team bikes are sponsored by Italian manufacturer known for there beautifully crafted carbon “control systems”, seat posts, and other components. 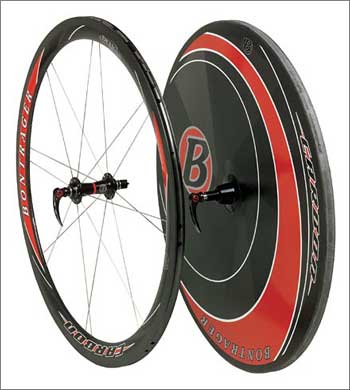 The stock 5900 comes equipped with the Aspide Team from Selle San Marco – it’s light and comfy.

Saddles – Selle San Marco – www.sellesanmarco.com
On bike comfort should never be taken lightly, but weight is definitely an issue. Italian saddle makers Selle San Marco supply the same seats to the team that you can buy. Although the stock 5900 comes with a Selle San Marco Aspide Team w/ titanium rails, this was not included in the Team spec I received from Selle San marco. Now, I can tell you that after several hundred km’s of riding, I still think this stock seat is one of the most comfy around. The only downside is the split at the back of the seat leaves your crack a sitting duck for rear-wheel road spray…!

Skidmarks aside, the folks at Selle San Marco confirmed they supply a variety of saddles to the team, depending on personal preference of each rider. USPS uses 5 different saddles: ERA, ERA COMPOSITE, CONCOR LIGHT (Lance’s fav), REGAL, STRADA.

Spokes – Sapim – www.sapim.be
Although Bontrager ships complete wheel sets to the team, the spokes are later replaced with product from Belgian spoke-maker Sapim.

Tires – Hutchinson https://tires.hutchinson.fr
Although Bontrager supplies the standard issue rubber on the 5900 you can buy, the Team rides rubber by French company Hutchinson. The company’s website lists a US Postal version of its Carbon Comp road tire, which comes in red, white and blue and looks pretty cool.

Get more info on the US Postal Team at their website:
https://www.uspsprocycling.com/