Last week we ran Part 1 of our Pez-clusive interview with Tyler Hamilton. Just like we promised – here’s Part 2 – so grab that coffee oh, cubicle-boy, and settle in for a second peak into Tyler – The Man.

Pez: How do you like living in Girona? Who do you hang out with over there, as there’s a big North American contingent?

Tyler: I’ve been living in Girona since 1997 except for one season when my wife and I lived in Nice. It’s grown to be a familiar place. The people are really nice, and the training is decent, so I don’t have any complaints. There are also over 20 pro riders in the area now, so there’s always someone to train with. It’s also helps our wives to have friends nearby that are living a similar life away from home.

Pez: Apart from contributing to your website, how do you kill the long hours in the hotel?

Tyler: I’m not travelling as much with my computer these days – I only take it along when I have columns to write. There isn’t a lot of time in the evening at the races after you schedule in dinner, massage, team meetings and/or an interview or two.

If I do get a few minutes of down time, I’d rather spend a little extra time at the dinner table with my team-mates. But it’s a pretty hectic time. So I don’t find myself having to kill long hours. That’s never the case. 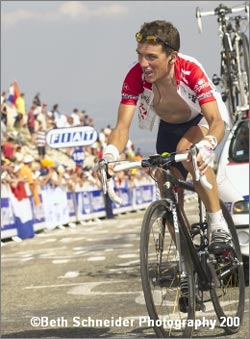 Pez: Who do you room with – does it just depend on who’s on the roster for each race?

Tyler: Traditionally, I’ve roomed with Carlos most often. We get along really well and we tend to have the same race schedule. At Paris-Nice however, I roomed with Thomas Bruun, who’s a younger rider on our team. It gave me the opportunity to get to know him a little bit better and to provide him a little personal support during a difficult race. Everyone on our team gets along, so the roommate situation is never an issue.

Pez: Riding in the international peloton, how are your language skills? What languages have you picked up?

Tyler: I studied French as a kid, so I can read it pretty well. And I’m studying Spanish now with a tutor in Girona. I’m not very brave about my speaking ability, but I can make a point or ask a question if I have to. I’ve only ridden for English speaking teams, so I’ve never been forced to get over my fears.

Pez: As a rider, who have you learnt most from? It must have been incredible being on the same teams as Lance Armstrong, Slava Ekimov, Laurent Jalabert?

Tyler: Andy Hampsten was my first serious role model. I followed his career before we became team-mates. But we roomed together a lot when we rode for US Postal together and became good friends. He was a really classy guy. He was always strong and smart at the races, and friendly and genuine off the bike.

Ekimov was the next guy to really make an impression on me. He really launched the US Postal Team in Europe. If it hadn’t been for him, we may not have made the Tour in 1997. He is an example of quiet strength.

Lance taught me a lot about working hard and making things happen. And finally, riding with and for Jalabert during the final year of his career was an opportunity I will always be grateful for. He is the embodiment of every other role model I’ve ever had.

Pez: Who’s the nicest guy among your fellow riders?

Tyler: There are a lot of nice guys in the peloton – Vinokourov is a guy that comes to mind first, probably because of all that transpired at Paris-Nice. I don’t know many guys who are as tough on the bike. But, in addition to that, he’s a really good person off the bike as well. He’s always someone you can ride up to in the peloton and start a conversation with.

Pez: If you could pick a fantasy line-up of riders from the past to help you win the Tour or Giro, who would be on your team? What about a DS?

Tyler: I wish there were a time we could have had 9 Americans together on one Tour team. That would have been really special. 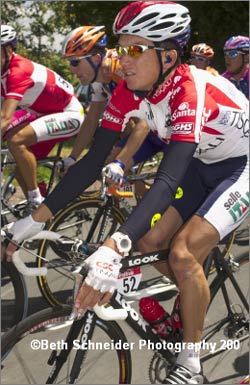 Pez: Did you idolize any cycle racers when you were getting into the sport?

Tyler: As I mentioned before, Andy Hampsten was a guy I looked up to during my early racing career. He was a huge talent around the time I was making my transition from ski racing to cycling. I even got his autograph on year at the Tour de Trump. I was a real fan.

Pez: As you used to be a ski-racer, do you still follow that sport, or any others as a fan?

Tyler: I still follow ski racing pretty closely. I watched every day of the World Championships live on Eurosport. (European satellite channel, and friend to almost all British cycling fans!! – Pez) Some of the guys I raced with are still at it, so it’s fun to follow their progress. Also, seeing Bode Miller rip it up is always cool. And you haven’t been reading my web journals –if you had, you’d know I’m a huge sports fan especially the Boston teams like the Red Sox (Baseball) and Celtics (Basketball) and the New England Patriots (Football).

Pez: Turning back to the bike, what’s the greatest performance you’ve witnessed by a pro.racer?

Tyler: Seeing Lance win three Tours was really special. The win in 1999 really stands out because no-one thought the team could do it. But any time you see a guy dig deep to win is incredible. I think Vinokourov’s ride at Paris – Nice was really humbling. I don’t know if I could have done what he did under the circumstances.

Pez: What’s the funniest or weirdest thing that you’ve ever seen in your Euro-career?

Tyler: A couple of times we’ve had horses jump into the peloton. One year a big group was split by a horse that got into the bunch. The guys behind didn’t want to get kicked, so they slowed up, and the guys ahead saw an opportunity to take off.

Pez: Who’s the craziest or funniest guy in the peloton?

Tyler: I think Cipollini would like everyone to think he’s crazy, but in reality he’s a really serious guy who works super hard for his results. There are a lot of really funny guys around – Matt White, David Millar, Floyd Landis. But I wouldn’t call them crazy.

Pez: What do you read to help you chill out?

Pez: How about a favourite musician/band, and film, if you get the chance to enjoy that sort of thing?

Tyler: REM would be my favourite group. I don’t see a whole lot of movies, though. But I have some classic favourites that always make me laugh like – “The Jerk”. Basically any comedy will entertain me. I also like ski movies like stuff by Warren Miller and Shane McConkey.

Pez: So, if you sat down to watch a movie version of ‘The Tyler Hamilton Story’, who would you like to see in the title role?

Tyler: I don’t know of any actor who would want to pair down his upper body to the point where he looked like a bike racer!

Pez: If you weren’t a sportsman, what would you be your ideal profession?

Tyler: Sports have always been a part of my life. I’ve played baseball, soccer, sailboat raced, skied and biked. I always envision myself being able to encourage other kids to do the same, and have the same kind of fun. If I weren’t an athlete, I guess I’d be a teacher.

A huge thanks to Tyler for speaking to us. Everyone at PezCyclingnews sends him our best wishes for the rest of the 2003 season and beyond. We’ll follow all the big races, so you’ll find out about Tyler’s successes here!

To find out more about the man himself, check out www.tylerhamilton.com and also www.team-csc.com to get more info on Bjarne Riis and his squad.