What better way to get inside a Grand Tour than ride along with a top rider? We’ve hooked up with Liquigas super-domestique Dario Cioni for a series of insider Giro reports, as he helps ProTour champ Danilo DiLuca’s quest for victory. We checked in with Dario just before the stage 1 TT…

“So do you prefer Dario or David?” I open by asking. The voice is soft, polite and unquestionably Italian, the English probably better than mine and the answer is straight to the point: “Dario”. I note that it’s David and not Davide, as you might expect in Italy; “My mother is English, that is why it is spelt like this, my grand parents came from the Lake District in England and I still have an auntie in Pitlochry, Scotland. I consider myself half British and have thought about riding for Britain, but there is a problem with the UCI because my first racing licence was Italian.” 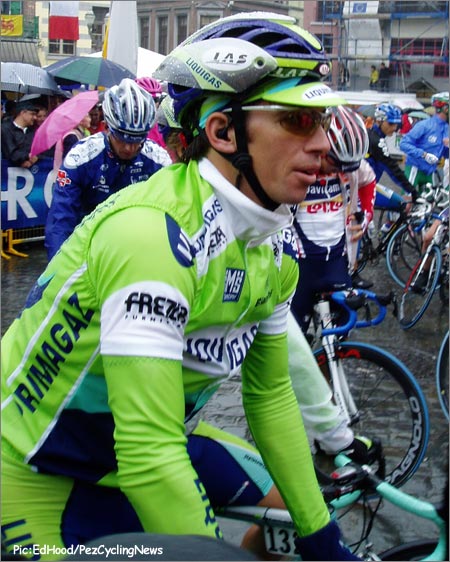 • David Dario Cioni has taken time-out to talk to Pez before the prologue of the 2006 Giro and he is going to give us his comments throughout the race. This morning he was about as excited for a ride in the rain as any of us…

Dirty Beginnings
Like Floyd Landis and Cadel Evans, Dario was a mountain biker, I ask how he
made the cross-over; “From 1992 until 2000 I was off-road, during that time I rode for the Mapei mountain bike team and was coached by Signor Sassi who
used to do tests on me at the Mapei training centre. I was getting better values on the tests than some of the professionals and on the strength of those results I got a contract with the Mapei road team.

Three Days To The Vuelta
I’ve tried to do my home work and ask him about the fact that he was plunged
into the 2000 Vuelta as a first year pro; “Yes, a couple of the older riders didn’t want to ride so the team thought that it would be better to have a young guy get experience than some older guy with no morale who wouldn’t finish. I didn’t know I was riding until three days before but I picked-up a lot in those three weeks, with my back ground in mountain bikes there was so much I didn’t know about riding the road, that Vuelta was a great learning experience.”

I note that he rode the race again in 2001 and finished 35th; “The last week
was so much easier that year because I was more experienced, especially my
positioning in the bunch, I kept out of the wind better than I had the year before.”

In 2002 he rode Giro and Vuelta; “That’s not so bad because you have time
between them and can rest then start a fresh programme for the Vuelta. The Giro is much harder now in the days of the Pro Tour though.”

Three Men For The Tour
He made his Tour debut in the ultimately ill-fated Fassa team in 2003; “It was very hard because we lost five riders to illness and there was just me and Bruseghin (Marzio, Italy) to look after Ivan Basso who was in a top ten
position. People don’t realise how hard it is to do something like go back to the car for bottles in a race like the Tour, it’s so tough. We had to say to Ivan that we would each go back to the car once per hour for bottles, we had to bring up six each time, but it was just too hard to go back to the car any more than that.”

Three Top 5’s
The next year, 2004 was his best to date with 5th in the Tour of Romandie, 4th in the Giro, 3rd in the Tour of Switzerland and a win in the Italian time trial champs, what did he put it down to? “Experience and good morale, if you go well you have good morale and the one helps the other. In that Giro I was very strong at the end and moved up from around tenth to 4th in the last week.”

I put it to him that he must have had thoughts of a podium in the 2005 Giro
– by now he was with Liquigas – having seen the writing on the wall at Fassa; “Yes I was looking for a good result but it was the start of the Pro Tour and the Giro has moved up a level since it became part of it. I finished 13th but was good in the last week, with a strong ride in the last time trial.”

And what about the 2006 Giro, is it all for Di Luca?
“Pellizotti (Franco, Italy) and I have a certain amount of freedom, but if Danilo takes the pink jersey then it all changes, the goal of the team is to win the Giro of course. For my own part I am happy that my form is coming back, I rode a poor Paris-Nice due to illness but I improved in the Basque and Trentino tours.
I was sixth at Romandie recently and was very happy with that.”

How would he define himself as a rider?
“I am good all round but I would like to be a little stronger against the watch, when my form is good I can ride well in the mountains but usually I have to defend on the climbs, not attack.”

The Giro So Far…
Dario was soon to go on the turbo as part of is warm-up for the 6.2 kilometre opening time trial, he had already done 50 kilometres that morning in the company of team leader Danilo Di Luca; “It loosens off the legs and anyway it is not good to sit in the hotel room before the race, the time drags.”

Stage one went well for Liquigas with Di Luca one of the fastest to the top of the climb, but losing out on the rapid descent to the finish for an eventual 10th at 19 seconds behind winner Savoldelli; with Dario 23rd at 30 seconds.

“Yes, it was a good day for the team and for me it was OK. It is always hard riding a race like this when you have not ridden your bike much for a few days.
I think if we had ridden the course when there was no traffic we would have been able to gauge the descent better and go a few seconds faster. Three or four seconds may seem like a lot now but in the last week when the race is in the mountains they will mean nothing; besides a crash on the dangerous corner at the bottom of the descent could end your Giro right there. It was a good race for us though, Danilo was good on the climb and lost very little time to the other overall contenders.”

Seems his form seeing the future is spot on as well – when asked about how today’s stage would go, Dario replied: “It will be for the sprinters – they have few chances in this race and will not want to waste this one. A break will go, but it will come back and the day will end in a bunch sprint.”

• Check out Dario’s fresh new website at CioniDario.com, and see his team at TeamLiquigas.it,
– and stay tuned to PEZ for more from Il Giro!