When we last spoke to Dario just after stage seven, he had lost 20 minutes and Liquigas team-leader Danilo Di Luca had gone deep into the red to limit his losses. But like the words of ‘In the Ghetto’ say; ‘and the world turns’ . . .

Fast forward to the end of stage 10 and Liquigas have just pulled-off a tactical coup; winning the stage and catapulting Franco Pellizotti into 4th on GC.

PEZ – It was a better day for Liquigas today Dario.

Dario – Yes it was a good day; we won the stage and now have two riders in the top ten with Danilo and Franco. We didn’t have to work the team in the finale either and Charly [ed. Note – Wegelius, who was in the break with Pellizotti and rode like a Trojan for him] and Franco have the rest day to recover from their efforts. 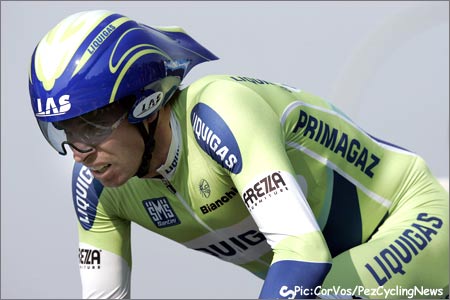 Dario is feeling better, and is decent chrono-man, but says he’ll save his strength for the coming mountains.

PEZ – Bearing in mind that the team’s main effort is for Di Luca and the GC I was surprised to see Charly and Pellizotti go with the break.

Dario – We wanted a result today and we had a dual strategy, either we kept it together and set things up for Danilo because the uphill finish really suited him or if a break was going to go all the way then we would cover it. When we saw that big group go we decided it was the one and we should get across to it, so Charly and Franco bridged-up. We were glad we did, not just because we got the win but because Lampre had to chase very hard at the end for no reward.

PEZ – So how did stage eight (won by Basso) go for you?

DARIO – My back was a little better but at the bottom of the finish climb there was an explosion‚ and I decided just to ride up at my own pace, Jan Ulrich was in the group too.

DARIO – I felt a bit better still even though it was a hard day, the pace at the end was very fast but I finished in the main group.

PEZ – What about today?

DARIO – I worked hard today, I had to cover an early break and then I was fetching bottles from the car. My back is better, but it still needs time to recover.The rest day is tomorrow so I can get extra treatments from the team physiotherapist, we have had an osteopath look at me too. I took it easy on the last climb today, now that the GC has gone. 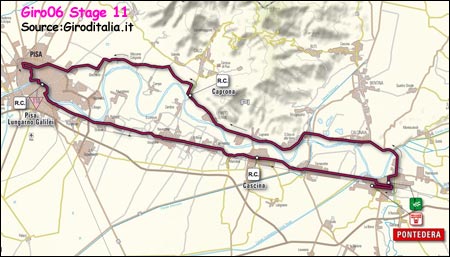 The Stage 11 TT from Pontadera is pancake flat, but the 50km includes a LOT of turns…

PEZ – What will you do on the rest day apart from have your treatments?

DARIO – We will ride the time trial course, 50 kilometres, so maybe one and a half hours.

PEZ – The time trial is after the rest day, what are your thoughts on that?

DARIO – I will ride hard to the first intermediate check and if I am going well I will try and see what I can do, if I am not going well I will just ride in. There are still ten days to come after the rest day with all of the big climbs and there is no point in wasting energy.

PEZ – If you recover well, is it possible that you can ride for yourself on one stage?

DARIO – Yes, it is possible especially now that I am no threat on the overall.

PEZ – How are things within the team?

DARIO – Good, we have two in the top ten and Danilo says he is feeling much better than he has been in the earlier stages. The season has not been a great one Liquigas so far but the Giro is a major goal; after our good ride in the team time trial and our win today the sponsors are very happy with the way the team is performing.

PEZ – Will there be a little champagne tonight?

DARIO – It is not a good stage for that because we must drive for three hours to the airport then there is the flight, but yes, at the hotel tonight there may be a little toast.

I think those Liquigas boys have earned their champers – we’ll be talking to Dario again after the time trial.