It was a satisfied Dario Cioni who gave PEZ his latest take on the race – right after the rapid TTT which marked the Giro’s return home; telling us: “Yes, we had a good race, we were fourth just three seconds behind Discovery Channel, we were satisfied to be so close to the big specialists, we don’t really have guys who concentrate on the TT in the squad so we were happy with the ride.”

PEZ – “Can we go back to the Belgian stages; are Liquigas and Dario Cioni happy with how they went?”

Dario: “We knew the stages in Belgium would be difficult and nervous, the main priority was not to lose precious time; there is always the wind, rain and the small roads up there, but we came out of the four stages without any serious problems. I came down in the crash that put Petacchi out but fortunately it was not too bad and I have recovered OK; the real Giro started today.” 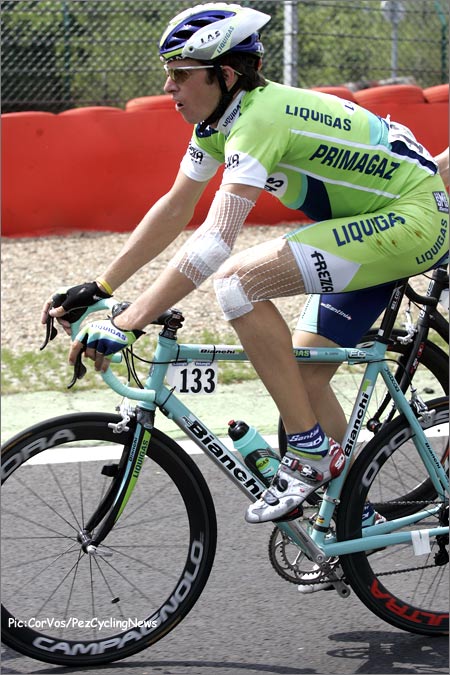 Dario shows scars from the crash that took out Petacchi.

PEZ – “Did any one else crash or get sick with the bad weather up there?”
Dario: “No, just the odd little cough but the weather is nice now, so no problem.”

PEZ – “How did the transfer day go?”
Dario: We did three hours on the TT bikes to get accustomed to them and spent some time on the road bikes too. It was important that we saw the course and understood it, even though there was not much to see; there were only two bridges to get over and three places where you had to touch the brakes.”

PEZ – “What was the plan if anyone punctured today?”
Dario: “Only three riders would be waited for, Danilo, Pellizotti and me. The race went very well for us, there was just one moment when someone touched Pellizotti’s wheel, and we lost our rhythm, but only for 100 metres.”

PEZ – “Was there much wind today?”
Dario: “No, just a light breeze from the side or rear, this helped the speed and kept the time gaps down I think.”

PEZ – “Who was strongest?”
Dario: “Danilo was strong, me, Pellizotti and Wegelius rode well too. I started off doing long spells at the front but had to shorten them as I felt a bit fatigued, but I was strong again at the end and did big pulls; I haven’t checked my pulse meter, but I think I was at my threshold heart beat all the way.”

PEZ – “Danilo is quite a small guy, usually it’s big guys with big motors who are good at the TTT.”
Dario: “Yes, but he has very good form just now and is riding very strongly with high motivation.”

PEZ – “Are you and Danilo happy with the Giro so far?”
Dario: “Yes, we have kept ourselves well in contention; but the race will start for real on Saturday with first big climbs where our team should be particularly strong.”

PEZ will be talking to Dario after Saturday’s stage – Cesena to Saltara, 236 kilometres including the first category climb of Monte Catria, there should be plenty to talk about!