Last week PEZ’s man in Italy, Alessandro Federico, responded to the Siren call of world class cycling journo-ism for the unveiling of the 2006 Giro route in Milano. As usual, we got right into the ‘shwing’: consoling Petacchi, advising DiLuca, seeing a few sights in Milano, flirting with some girls, befriending an over-stuffed Giro mascot, and reflecting on the coming winter and what makes the Giro special.

Today a cold wind from the north started to blow on the beach in front of my house. And today I go to Milan to cover the 2006 Giro presentation. I’ve followed about 100 major races in my life, but this is my first time for this event.

It should be cool. During the last few weeks, there has been much anticipation in Italy for this event, especially on the web. There were rumours of a climb in the South, a team time trial, and many mountain stages (too many, it cannot be true). I’m convinced that not all the anticipations are correct and many of them are just a collection of tifosi dreams. 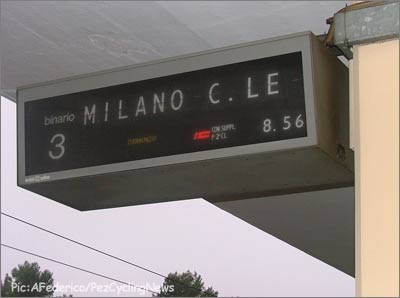 How to spend the time in the best way? I’ve bought some newspapers, sports editions. They speak about the presentation and one of them, Tuttosport, headlines with “Ecco il Giro dei marziani,” which in English would translate to something like: “Ladies and gentlemen, the Giro just for Martians”. 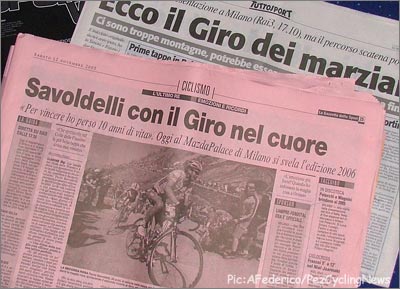 All the news that’s fit to print.

The official newspaper (pink like the leaders’ jersey) avoids any anticipation. What I know for sure is that the presentation will be just for Italians: Many teams asked their riders to avoid the presentation because of a long time war between the Grand Tour organisers and teams on the ProTour. So there will be nobody from Discovery Channel (even though Disco’s Savoldelli was last year’s winner!), Quick Step and many others. It also looks like Simoni will be not there. 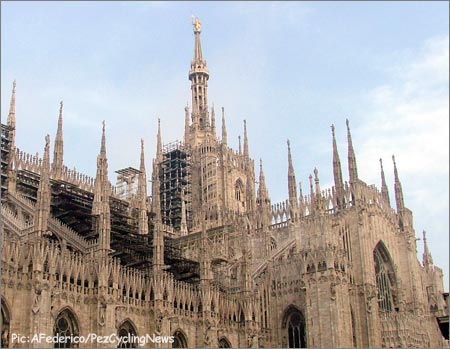 Aah Milano… and the famous Duomo.

It’s a beautiful day in Milan: Quite cold (10 – 12°C) but sunny. I’m early so why not come back to Piazza Duomo? Just for a look and to be sure that the Dome is still there. Many images run in my mind while I sit in the tube. I was so young last time I went to the Piazza Duomo…(3) Seventeen years, a girlfriend to meet. The meeting point was in front of the Dome, but that was a problem: there was a big crowd and no cellular phones (they were not so common in 1991). Returning there is like a jump to the past. Yes, the church is beautiful, as always and the old Galeria Vittorio Emanuele too. 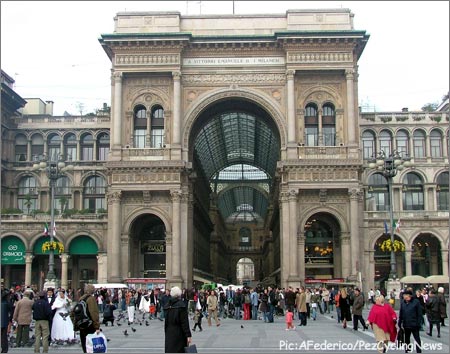 Despite my visit to downtown, I’m still early when I arrive in front of the Mazda Palace. Too early, there is almost nobody. 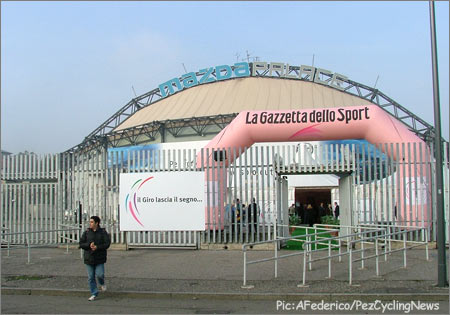 Ah, scuzi…. Is this the place for the Giro presentation…?

Very good! There’s time to look around and introduce myself to the two Belgian ladies… 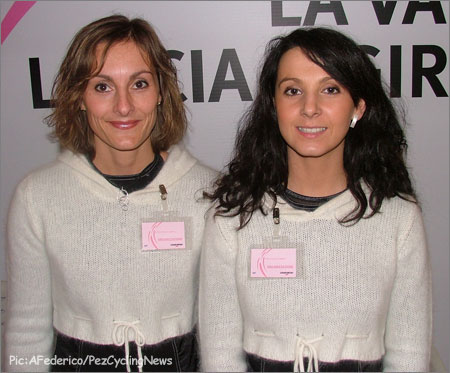 They came to Italy because the Giro will start in their country next year. There is a tape of Marco Pantani showing inside the hospitality tent; I have to decide with whom to watch it: 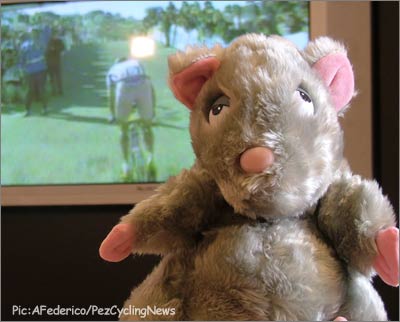 with the “mascotte” of the Giro… 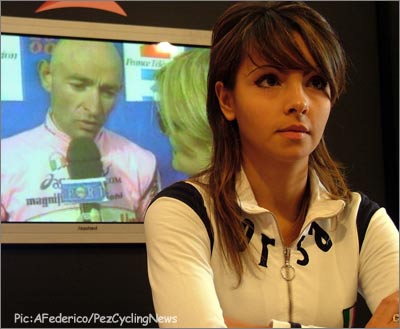 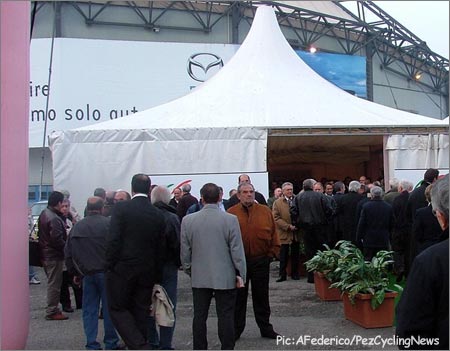 Suddenly… a crowd appeared at the gates.

The time pasts quickly and I’m still hanging with the mascot (Elena was busy, that’s what she said …) when I realize there are many people around me. 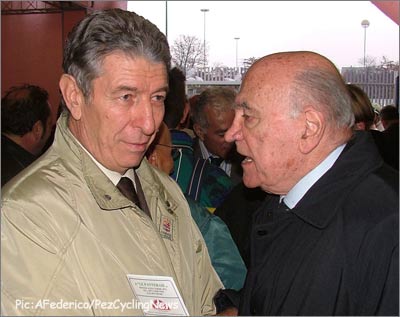 Two guys who know the Giro… Gimondi and Magni.

So many … It looks like another place. Gimondi and Magni are talking not so far from me the officials are busy with the journalists for the credentials… 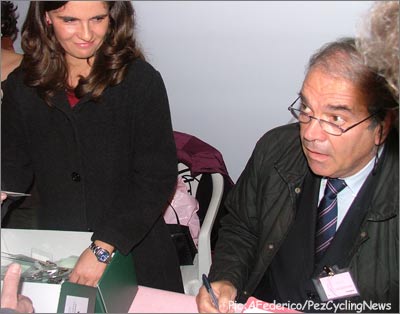 and … how many riders, how many champions from the past! There is Baffi, Fondriest, Moser, Saronni, Berzin, Gotti. I ask Baffi if he has any inside knowledge of the route, but he is very diplomatic. He says he doesn’t want know, it is better to be surprised. 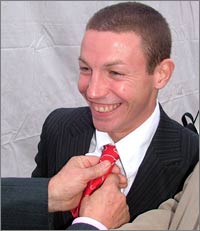 Emanuele Sella gets a touch-up before going inside.

Outside there is Ballerini, and I also see Sella, the young climber who won a stage in Cesena two years ago. He is so young! He looks like he’s headed to his first day at university, and his manager smiles and adjusts his tie. 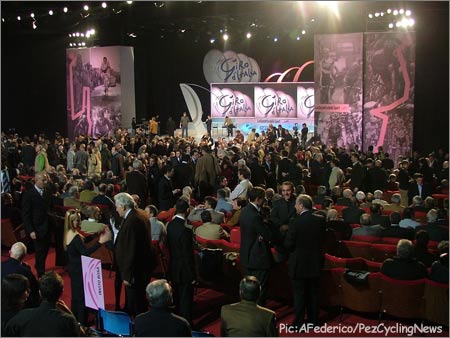 It is time to come inside. There are a lot of people already, a lot of confusion but the young nice girls (14) help everybody to find their seat. The photographers jump up on the stage because on the first row there are Moser and Saronni, speaking but not fighting (15). 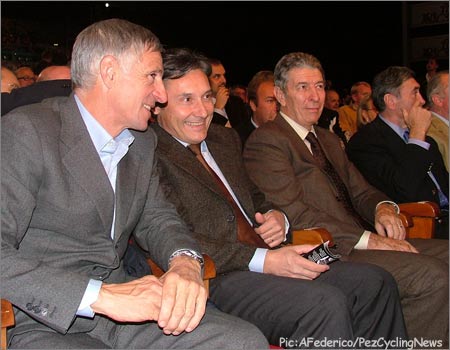 Moser & Saronni letting bygones be bygones beside Gimondi and Merckx.

“Five minutes, please, everybody to his own place.”

Here we are—all is ready to start. Italian television is broadcasting live, so there’s a big show before the technical presentation of the route. Very nice lights, and of course dancing girls… this is Italy after all… 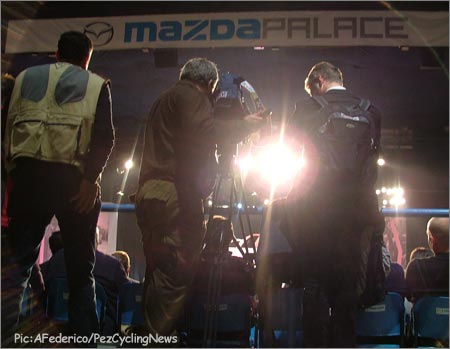 When the route is unveiled, there is a lot of chatter from the audience. All theanticipations where correct: Five stages with finishing climbs; ten mountain stages; around 100 kilometers of time trailing. And what about the Martians? What do they think about the route? 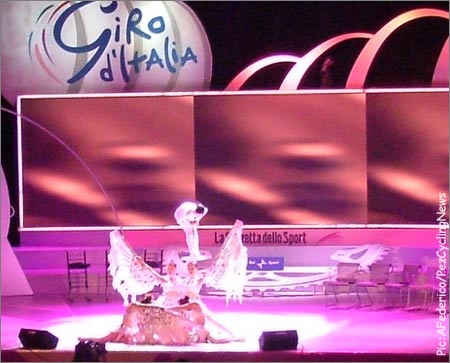 The lights go pink, and the show begins!

Petacchi is very upset, speaking very seriously with a thready voice that I can’t hear. It’s better to speak with somebody happy, like Simoni. 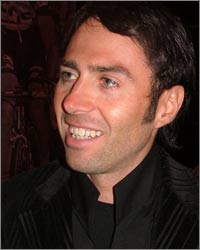 Simoni is all smiles about the route.

He likes the whole Giro. Di Luca (21) is happy too, but a little bit worried. He plans his season around the Giro. I tell him to check out the Saltara stage (Stage 7) because I know the streets there very well and I think it will be a tricky finish. He looks at me and quietly answers that he will check almost all the stages; he would like to prepare for this Giro the way Armstrong has taught.

I also meet Savio, the manager of Selle Italia team. He is full satisfied with the route and hoping his team will receive the wild card. He is sure that on the mountains the show will be great. 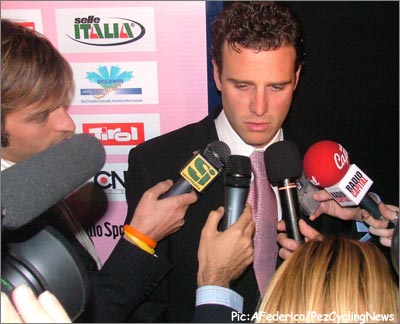 … while Petacchi speaks as if he’s been betrayed by his best friend.

I come back to Petacchi—he is still speaking. He is very serious. He repeats and repeats that he is not sure if he will be in Belgium for the start. He repeats again and again that his normal target is to win a minimum of four or five stages and in this Giro there are just five stages suitable for a final sprint!

I try to ask him if would ride just the first half of the Giro, like McEwen has done in recent years. “But everybody asks me the same questions!!” he replies. I stand like a stone and I feel like a jackass. But I smile.

It’s late, eight o’clock, and I have to take the last train. I will be home in the middle of the night, together with the first noises of the fishermen.

Back home. It’s winter. The bike is sleeping. Now my mind will cover again and again, for a thousand times, the Giro route. I will dream about the Alps, the seaside, and the great forests. Because the Giro d’Italia has something special compared to the other Grand Tours: It’s Italy, our beautiful land. Our food. Our tradition. Our women. Our life.