Alessandro Petacchi has proclaimed long and loud that there just aren’t enough chances for the sprinters in this year’s mountain-fest of a Giro d’ Italia. That meant the pressure was on the Milram man to make this one stick, but with 197 kilometres between Mons and Charleoi, there was plenty that could go wrong for Ale-Jet.

And it went wrong, but only in the final 200 metres as the afterburners failed to ignite for Ale-Jet. He could only watch as adopted Belgian Robbie McEwen racked up a fine stage win on ‘home’ soil. 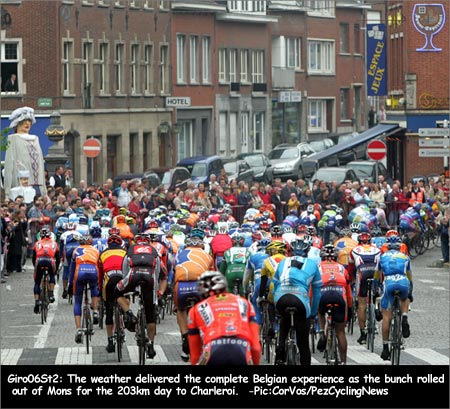 Milram slogged themselves with Lorenzetto doing a huge job, keeping the needle in the red, but, not for the first time this year, the Milram train seemed to uncouple itself at the key moment, with McEwen pickpocketing another great victory.

It would have been an emotional win for Petacchi, representing his country. This year’s Giro is paying its respects to the victims of a 1956 mining tragedy which killed 156 Italians and 95 Belgians – 50,000 Italians came here after WW2 to work in the mines, hence the incredible number of green, white and red tricolours you see on the roadsides for the late spring Classics.

An early four-man breakaway jumped clear at the 22kms point, and were up to 7 minutes clear at one point, and one of those guys was an Italian. The quartet was elder statesman Gabriele Missaglia (Selle-Italia), and young pups Arnaud Labbe (Bouyges Telecom), Benat Albizuri (Euskaltel) and Mickael Delage (Francais des Jeux). 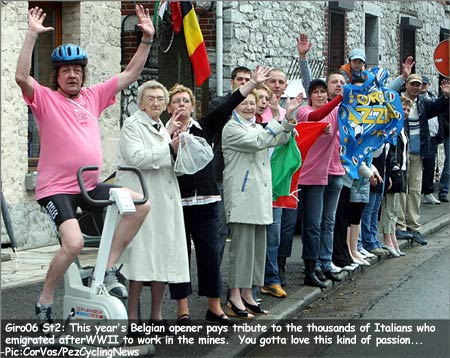 Delage was cleverly stuck out front so that Brad McGee could have an easier ride, putting the onus on Discovery Channel. In the peloton, Milram and Davitamon-Lotto came up eventually to help the Disco boys who’d been keeping things pegged at a reasonable gap.

The breakaway riders started infighting and attacking each other way, way too early – and blew their chances, such as they were, with the sprinters’ teams starting to close things down.

With 1’37” under the 30kms to go banner, Missaglia was doing his best to coax his breakaway buddies into some sort of order but it was a lost cause as Delage and Labbe succumbed. The narrow roads twisted and turned enough to have kept the escapees hidden from the bunch, and given them a sniff of a chance of surviving to the finish.

Albizuri clawed his way up to Missaglia and looked as if he was dying, with Missaglia clearly the stronger man, and the young Basque just wasn’t able or willing to offer any help. It was all over 17kms from home, as the peloton swept the breakaways up, Milram driving things on the front, with Rabobank sticking a few guys in the mix.

Brad McGee was sitting pretty in the ciclamino jersey, with his FDJ crew keeping him shipshape on the run-in to the finish.

6kms to go and things were getting nervous – a very smooth looking Basso, Di Luca and Savoldelli were moving up to stay out of trouble as the peloton flew through some pretty tight corners. Discovery were pulling at the front, and QuickStep were doing some turns for Bettini.

Rabobank’s Russian, Alexandr Kolobnev, miraculously survived a high-speed face plant after getting a bump from a Bouygues Telecom rider. Ominously for Milram, McEwen was sitting on Petacchi’s wheel in the final few kilometres. 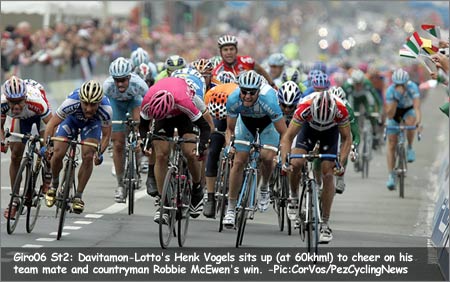 Milram were driving hard into the final 500 metres, but suddenly Bettini appeared and Olaf Pollack for T-Mobile went for a long one. This seemed to upset the Milram plan, and as their last man was swamped Petacchi was caught behind his rivals. McEwen came flying up the barriers with Petacchi’s speed blunted by the uphill drag and the Aussie rocket came through for a clear win. Savoldelli had no problems hanging onto the Maglia Rosa as the Giro circus prepares to head to Namur tomorrow.

Interesting little snippets: Gianni Savio made a bid for the most fashionable DS with a stylin’ suit on show as he stood by the roadside after the team cars of the breakaway guys had been pulled over.

Eurosport had a nifty little device which showed us that Vladimir Miholjevic was cruising at 73% of his 186 bpm maximum heart rate. Pretty impressive when you realise that statistic was timed at 11 kms to go with Milram blasting to the finish at 64 km/h! Further up at the front, Fabio Sacchi’s heart was hammering at 89% of his max. Yep, it’s a hard way to earn a living …

Keep it PEZ for all the inside info from the 2006 Giro d’Italia!