The 2006 Giro is barely half-way in and far from over. The time gaps are already B I G and after today’s rest, it’ll be all work until Milano. Not to say it’s been an easy ride so far, and the seconds earned have been paid in full – here’s how it’s taken shape…

The first rest day was followed by a time trial, just as the second one will be. The symmetry ends there though, as Stage 5 was a Team Time Trial and it was only 35k – Stage 11 is an ITT and measures 50k. The TTT was highly-touted ever since the Giro route presentation over the winter, but in the end the time gaps were moderate at best and CSC emerged the winner on the day by a mere one second after T-Mobile made a royal screw-up to drop their fifth man in the final stretch. Discovery lost a little over 30 seconds and the collective jaw of the cycling world dropped – now we realize it probably won’t matter all that much. 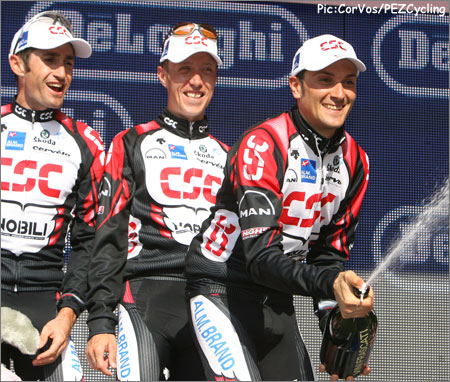 CSC popped the bubbly after a long-awaited TTT win.

Stage 6 was a sprinter’s feast and saw Robbie McEwen take his third win at the 2006 Giro. 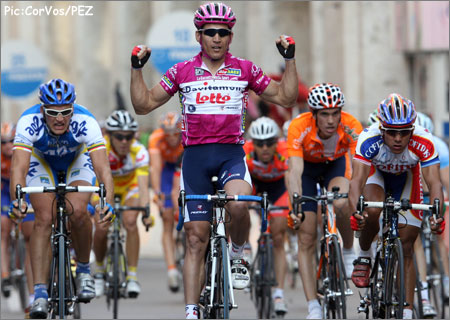 Stage 7 was the first really hard day of racing – 236 km of hard terrain with two significant climbs and a hot day to boot. Rik Verbrugghe came up big with a late race move that got him the win out of the break. Behind, there were a lot of drawn faces, but no significant time gaps among the contenders. That wouldn’t come until the next day. 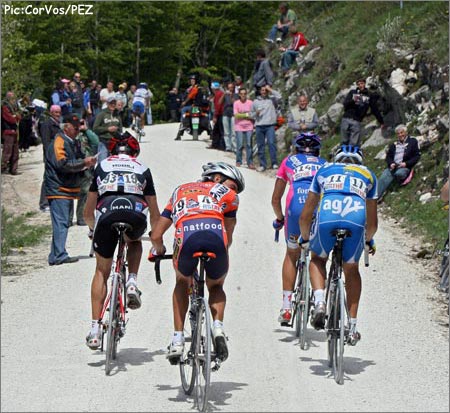 Stage 7 was a very hard one, but was good to what was once one of Belgium’s big hopes: Rik Verbrugghe

Stage 8 was the first mountaintop finish, and the lucky climb was the Passo Lanciano. Ivan Basso rode a climb straight out of the playbook from the Glory Days of Lance Armstrong – first mountaintop finish: destroy all comers. Basso absolutely steamrolled all contenders with a superb performance – he took a solid 30 seconds out of Damiano Cunego in 4k. That’s not huge, but it’s significant. Cunego was the only one of the big-time contenders to actually keep Basso within reason – the gaps behind were much, much bigger. 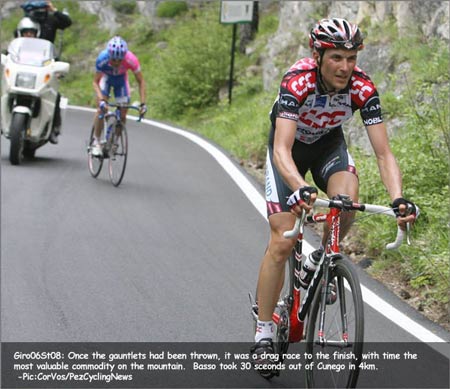 Ivan Basso stomped all over the first mountaintop finish and sits now in a commanding position.

Stage 9 came down to an uphill bunch kick, which seemed tailor made for Paolo Bettini. Once again though, Il Grillo was pipped at the post, this time by 24-year-old Lithuanian of AG2R, Tomas Vaitkus. 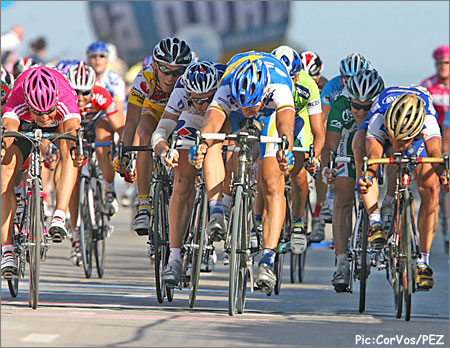 Tomas Vaitkus’ front tire got the best of Paolo Bettini.

Yesterday’s Stage 10 saw a big jump on GC for the opportunistic Franco Pellizotti. Pellizotti got into the early break and rode it to the finish, taking the win, and a 19-spot jump on GC to 4th. 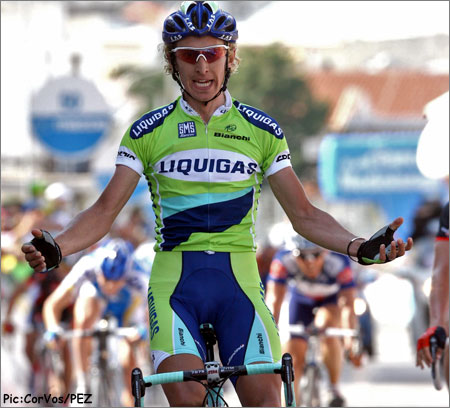 Stage 10 was good to Franco Pellizotti.

Where The Race Stands
Ivan Basso is without a doubt the man to beat. He was when the race started, and now, over a minute and a half up, more than ever. With that said, Basso remembers 2005, and so do we. He was the strongest man in the race and looked ready to pummel everyone until he came down with a rotten stomach bug and lost almost an hour. The chances of that happening twice are pretty close to nil, but it’s good to keep that in mind. 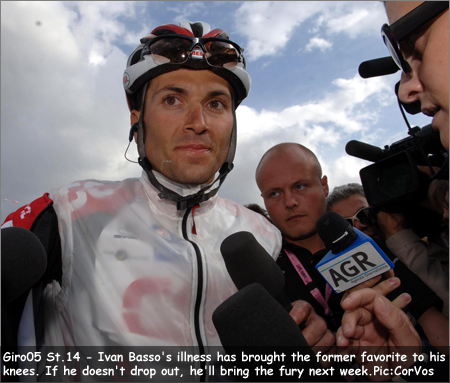 Ivan Basso had a rough go of it after getting the Maglia Rosa last year – losing three quarters of an hour in the stage that went over the big ol Stelvio and finished in Livigno.

Behind Basso, the challengers look to have chances in varying degrees. The best of the rest appears to be Damiano Cunego. He’s 1:48 back right now, and will most likely start the mountains with close to a 5-minute deficit, but he’s back from his disastrous 2005 Giro and looks set to challenge in the mountains. On a finish like the Corones, he could have a distinct advantage, as he weighs almost 20 pounds less than Basso – and at 24%, gravity will begin to demand a heavy toll. 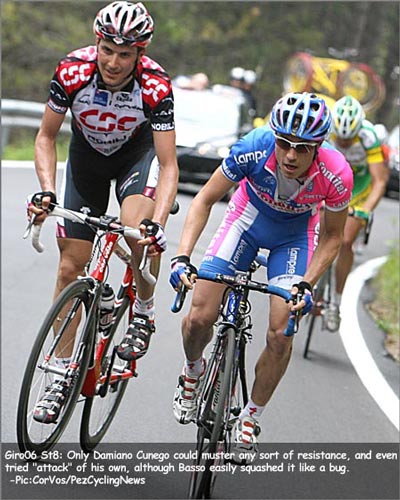 If things continue the way they have been – this could be a familiar sight over the coming mountain stages.

Jose Enrique Gutierrez has quietly nestled himself in 2nd overall without one bit of fanfare. Gutierrez, at 32 years old, looks to be on a helluva roll after coming in 4th overall at the Tour of Georgia and now sits 2nd overall heading into the big time mountains. Gutierrez was 3rd on the first mountaintop finish – 30 seconds adrift of Basso. The only other person able to pull off such a feat was Cunego. Gutierrez can time trial very well, as evidenced by a solid 3rd Place in the opening TT. He is setting himself up to be the surprise of the Giro, but then again, one bad day could see him 30 minutes back. Still – a name to watch. 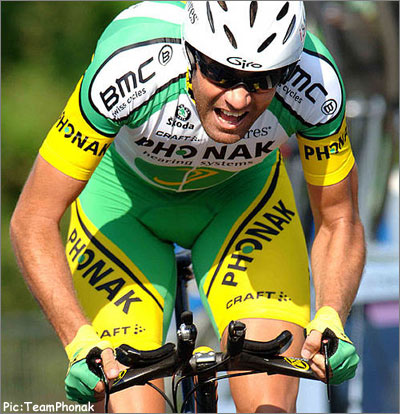 Jose Enrique Gutierrez has been the quiet surprise of the 06 Giro so far.

The other names to watch, the so-called contenders: Paolo Savoldelli, Danilo Di Luca, Gilberto Simoni, and Jose Rujano all have their work cut out for them going into the real Giro. Savoldelli should go well in the TT, but he looked awful on the first mountaintop finish – he brushed the poor ride off though, claiming allergies. He could still ride well, but the odds really look stacked against him in terms of pulling off his third overall win. He should ride better, could well win a stage, but should be happy with a podium finish. 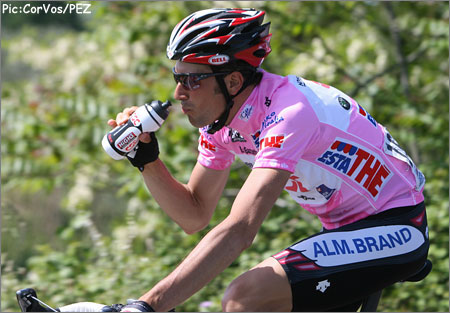 It will take something special to swipe the Maglia Rosa from Ivan Basso’s shoulders.

Gilberto Simoni looked fine on the first real climbing day, but that’s it – he wasn’t good enough to stay with Basso and Cunego or even Gutierrez, but he was right there behind them – 1:15 back. His teammate Piepoli finished with Simoni as well, a good ride – they could perhaps combine to do something special. 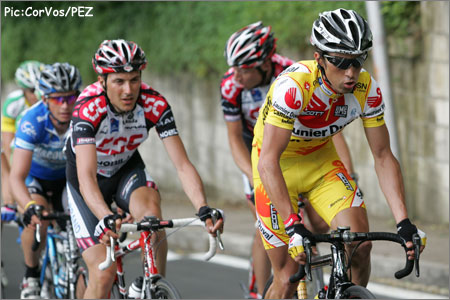 Simoni is going to need some kind of voodoo to get back into contention for the win.

The question now is – was that a good indicator of how Simoni is going? If so, Simoni better start attacking, because he’s not going to beat the big boys head to head. He started to show that last year, where the only stage he looked truly dominant was the stage over the Finestre, but even there he was hampered by cramps. These mountains are going to demand REALLY good riding – no amount of caginess or smart riding is going to limit losses on the Corones, Bondone, Pellegrino, Mortirolo, etc etc.

Di Luca and Rujano look questionable at best. Jose Rujano suffered through an illness on Stage 7, so he wasn’t doing too well, but it still remains to be seen how well he’s going. He’s well down on GC @ 5:32, and will lose more tomorrow – so once again, he’ll be given a long leash, so if he comes around…he could once again play a fantastic role as race instigator. 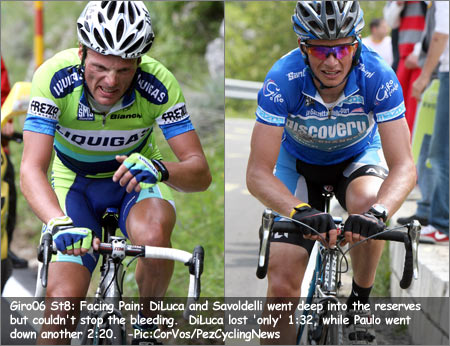 Danilo Di Luca and Paolo Savoldelli have their work cut out for them over the final 11 stages, but thankfully, the Giro organizers have provided them with a million and one opportunities. Or is that a bad thing?

Franco Pellizotti enjoys a healthy spot on GC after his audacious move on Stage 10, but he won’t factor in the overall festivities. He’ll be fortunate to finish in the Top 10.

There are of course a number of other names that could do good things in the coming stages: Giampaolo Caruso of Liberty Seguros rode an incredible Stage 8 to finish 4th behind Basso, Cunego, and Gutierrez – can he keep up that kind of level? If so, he’ll be well up on GC in Milano. Sergei Gonchar will ride reasonably over the mountains, but he won’t make too much of an impression – he’ll lose time on every significantly hard finish and will finish somewhere in the Top 10. A big question mark surrounds Tom Danielson. The prodigious climber has shown great promise at certain points, but has not yet shown it in the big time races. 8th overall at the Vuelta is a big deal, but Danielson is seen as a Grand Tour contender. He’ll be working most likely for Savoldelli, but hopefully he gets the chance to do something special on one of the mountaintop finishes.