Stage 12 was a transitional stage from Livorno to Sestri-Levante – it was intended to be a stage for Alessandro Petacchi, as it rolled right through his hometown, but alas, a kneecap fracture will keep the best of us from racing. Instead, the race was left to the mettle of a stage-long break – there was a stage and time to be had, how would the break finish? Could they hold off the field led by CSC?

On The March
The break rolled it the first hour, putting over six minutes into the field and covering over 50 km. The field was not all that vexed by the break’s furious pace, as Emmanuele Sella was the best placed in the 15-man move, in 22nd, eleven and a half minutes behind ice cube Ivan Basso. 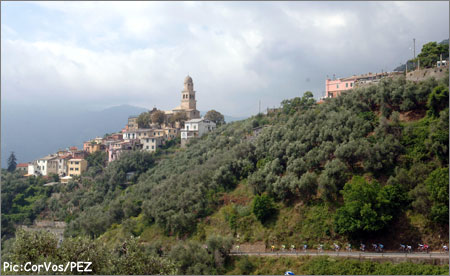 Stage 12 was yet another dull day at the Giro with boring scenery and flat roads. Sort of. Not really.

It wasn’t all merriment in the field though, as a crash after 10k took out some big names, including PEZ’ own Dario Cioni, along with Sergei Gonchar – Roberto Laiseka had to abandon as a result of the wreck.

Into The Hills
When the break hit the first climb of the day at Biassa, it was only 2 hours into the race and nearly 100k had already been covered. The break did well to motor the first 100k, as the final 70k were anything but flat, with three significant climbs to endure en route to Sestre Livante. After Biassa, another climb followed almost immediately shelling three of the fifteen breakaway artists.

Behind, over seven minutes back, the field was lifting the pace under the impetus of CSC. The field began to break up over the quick 1-2 of the mid-race climbs. The real climb still loomed though just up the road: 9k and 600 meters of elevation to be gained.

Game Time For The Little People
The climb to the Passo del Bracco started 137k into the race, and immediately the 12-man leading group began to disintegrate. Fortunato Baliani and Emmanuele Sella of Panaria both began to drive it harder and harder on the climb tossing riders willy nilly off the back, including poor Sven Krauss, whose 80 some odd kilo frame ain’t quite designed like Sella’s 50-60kg. By the top of the climb, the former group of 15 at the start of the day was now only 6: Baliani, Sella, Belli, Engels, Mori, and Horrach. 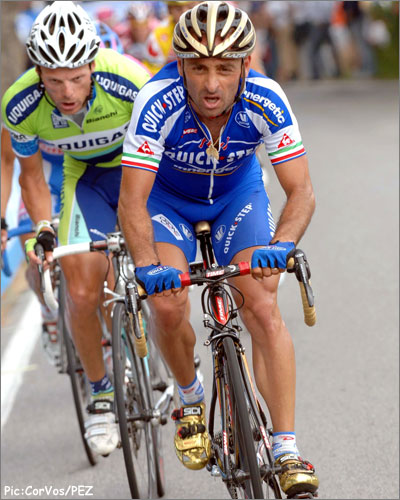 Paolo Bettini and Danilo Di Luca rocked a hard pace on the early stages of the Passo del Bracco, but their efforts came to naught.

Behind, in the field, the peloton raged up the climb, there would be no easy rides to the finish today. Paolo Bettini and Danilo Di Luca struck hard early on the climb burning up the 6.5% avg gradient at 33 km/h. Cunego and Paolo Tiralongo of Lampre followed, and Tiralongo soon took up the pace-making, absolutely shredding the field and catching more than a few riders out. Sergei Gonchar, probably suffering from his crash earlier, was dispatched early on, and even Tom Danielson, sitting in 5th overall, was caught out – he eventually caught back on, but there was some serious work to be done to rectify the damage caused by Lampre at the front.

Sella And Mori Have A Go
Over the top of the climb the break began to unravel, as assorted riders began letting gaps open here and there – it was only a matter of time before another group would split off from the six. Sure enough, two got themselves off the front of the little group: Emmanuele Sella (Panaria) and Massimiliano Mori (Saunier Duval). Both riders were taking animalistic pulls trying to increase their gap along the long descent – each nearly dropping themselves at different points along the descent. 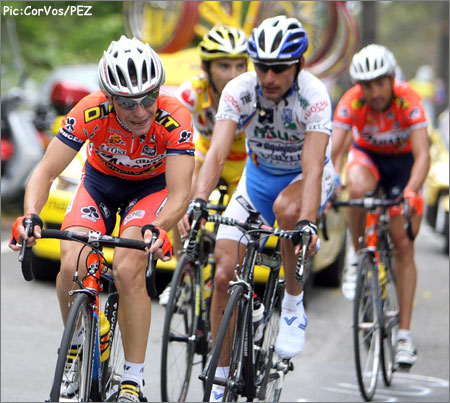 Emmanuele Sella rode with the strength of ten men on Friday, and if it wasn’t for not one, but two, unfortunate falls, he might have ridden to his second Giro stage win of his career.

Ouch
Inside of 8k to go, the two would-be attackers had almost 15 seconds on the chasing group of four, but Fortune lashed out hard at the two brave souls as they slammed hard into the barriers on one of the technical corners along the lower part of the descent.

The chasing group caught the two wrecked out souls and once again it was six riders in the front, until, whoda thunk it, but Mori went down AGAIN! Sella missed Mori’s second wreck, but Mori managed to take Sella off the back of the group in the process of wrecking, thus dropping the two riders from the break and leaving them painfully close behind, but almost too far to catch back on.

Attack To The Finish
In front, the four riders cooperated only sparingly, as attacks went left, right, and center in the final 3k. Each had a dig, but nothing doing, then all of a sudden, back from the dead, Sella and Mori caught back on in the midst of the attacking, and finally within the Ultimo Chilometro… 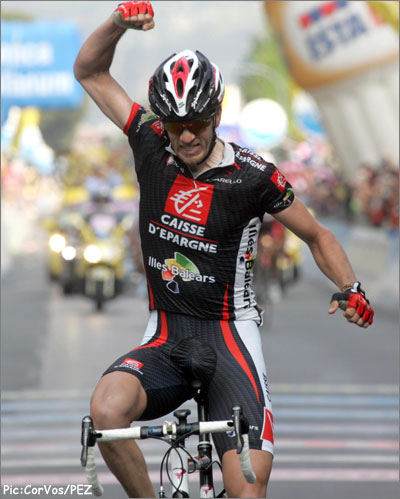 Joan Horrach was a quiet conspirator in the break all day, quietly saving his matches for one final move that left his remaining breakaway compatriots looking at each other.

Joan Horrach makes his first real attack of the day and it was the one that counted. He got an immediate gap and the remaining five riders behind sort of sat up for a moment and that was it. Horrach won by a comfortable five seconds and Addy Engels, by far the favored sprinter in the group, finished a frustrating 2nd.

Behind, the CSC-led field rolled in 7.02 later, once again led in by Paolo Bettini, who apparently loves sprinting for minor placings.

The break had pulled off an incredible ride on the day, catapulting the final six escapees back into the GC standings, but none moreso than Emmanuele Sella – who hopped from 22nd overall to 4th – nearly the identical jump that Franco Pellizotti pulled a few days ago.

Tomorrow’s Fun
Tomorrow’s stage is a virtual mountaintop finish – and by virtual, it doesn’t really finish on top of the mountain, but it’s only a quick descent after the Colle San Carlo to the finish in La Thuile. The final climb is a biggie – 1000 meters of elevation gain in about 10k. There is no significant climbing before the final ascent, just a long, gradual uphill day until the fireworks on the San Carlo.

Look for CSC to do their duty on front and then a photocopy of last week’s finish with Sastre doing the dirty work of whittling down the lead group and Basso finishing it off. Of course, it would be lovely if someone manages to hold on and do something special, but the odds look good for Basso to once again stamp his seal of approval on the stage.