Oh, brother …… not a good day to be a bike rider! If our puntastic headline wasn’t hellish enough, the weather was worse. What should have been the shortest and nastiest climbing stage in recent Grand Tour memory shrunk even more after the organisers had to cut the vicious final five kilometres out of the equation.

The finish line banners had to be hastily shuffled downhill when the mid-stage announcement came, moving the line to the Passo di Furcia. So, even though we didn’t see who had the style to conquer the Plan De Corones there was still plenty mud, snow, rain and misery for the Giro gruppo. 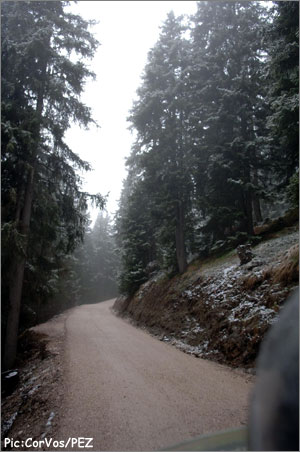 Yeah, the weather on the unpaved section of the Corones wasn’t looking too hot.

The organisers had no option but to halt the stage just shy of the unsurfaced Plan De Corones finish, as it was snowing, sleeting and freezing at the top and apparently there were vehicular access problems. Still, if this had been 1956, they’d have forced the riders right to the top and damned them if they didn’t make it smiling.

2006 is a whole different world, though, and a pre-race revolt was averted when the Passo delle Erbe was magically removed from the percorso because the descent was too dangerous. 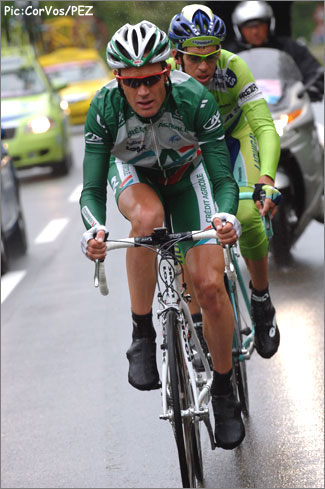 Jan Ullrich set off in shorts – maybe he’s taking his ‘Tour preparation’ too far, because it sure as Hell wasn’t shorts weather today. It was full winter gear for many of the riders, and it was often impossible to tell just who was where as they were all bundled to the max in hats, winter gloves, arm warmers, jackets and the rest.

Our boy, Dario David Cioni, was off the front from early on in tandem with Benoit Poilvet – we’ll find out in his next Pez Diary if he was just trying to stay warm, or if it was part of the Liquigas master-plan. He did a fine job, and survived until the Gazetta 110 sprint point with 9kms to go. 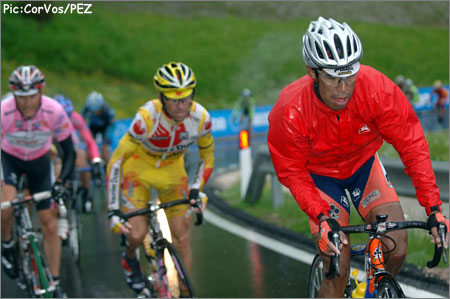 Behind them the peloton was suffering badly with a lot of very miserable riders grinding to towards the finish. The weather and the route changes meant that the expected fireworks never materialised, and we had to wait until the final 5kms for the action to kick off. 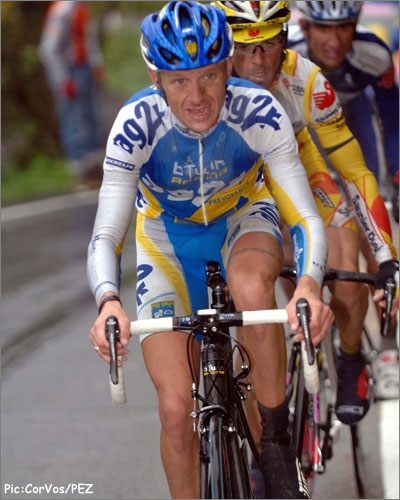 John Gadret has been the quiet surprise of this year’s Giro – the 2-time French National Cross Champion is apparently quite the climber.

Leonardo Piepoli came to the front for Saunier-Duval doing yet more great work for Simoni, with Basso, Gutierrez and Perez Cuapio to the fore. Just behind Di Luca had gone and Savoldelli was slipping away fast. Then Cunego lost his grip, and soon Gibo Simoni, too, was gapped and not looking too good in the cold. 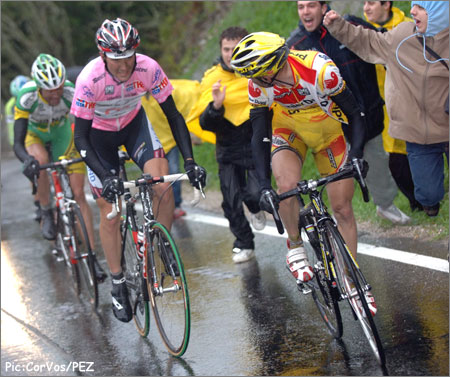 Leonardo Piepoli made the going tough and earned the stage win as reward for his efforts.

These riders, great climbers, were having big-time problems – there was no sign of fluidity, with their usual rhythms replaced by pretty spasmodic forcing of the pedals. Perez Cuapio did a big turn, then Gutierrez tried a brave move countered by Basso.

Inside the final 2k, Basso was looking a little troubled for the first time, as Pellizotti put in a big surge to hit the front, he managed to catch on right about the Ultimo Chilometro, just as Leonardo Piepoli accelerated and dropped him for good. He had a nuclear meltdown in the final 1k to lose 19 seconds. 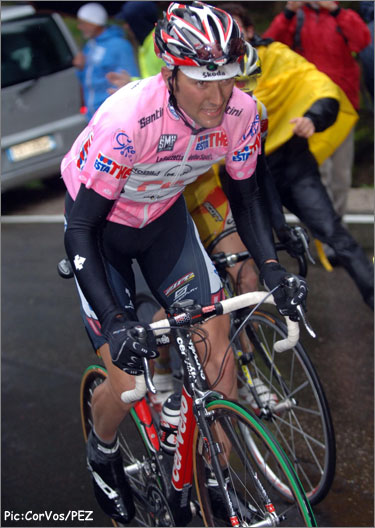 Ivan Basso was once again more than strong enough to take time out of all contenders.

The resurgent Perez Cuapio forced the pace at times on the climb and ended up falling off the pace towards the end and chugging in for 5th, almost 30 seconds back. At the front, inside the final 500 meters it was only Basso and Piepoli. Basso played canny, forcing Piepoli to the front as they moved into the final 300 metres.

Basso looked like he was thinking about sprinting for the win, but decided not to waste the energy – or maybe he hadn’t got the energy today – or maybe it was understood that since Saunier Duval had worked on the front for most of the stage, the win would go to Piepoli – whatever the reason, Piepoli rolled to an uncontested second win of the 2006 Giro over a contented Ivan Basso. 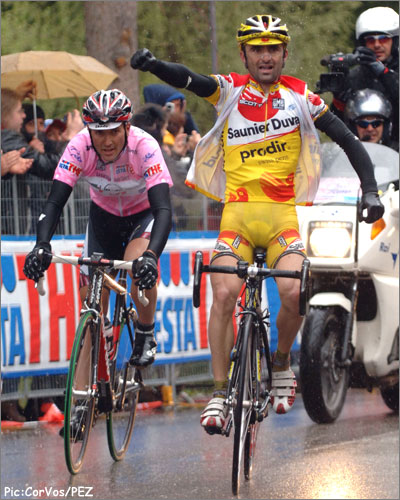 And then it was straight off to find shelter, as Tom Danielson towed Savoldelli home, but not quite quickly enough for his boss to keep his podium place, with Simoni jumping to third overall.

The time gaps weren’t as astounding as they would have been if the race had gone to the top – we’d have had calendars out, not stopwatches – but they were enough to let the riders know they’d been in a battle today.