The Giro pressed on today, with Ivan Basso sitting pretty in the Maglia Rosa, through the Julian Alps and a brief stint in Austria, before zipping town into Gemona. If there is a veritable “rest day” in these final days in the Alps, today qualifies.

The last climb of the Cuel di Forcia is a nasty little 7km long bugger (with a section at an 18% gradient!), but after climbing it, the riders face a 55km run into Gemona. The 2006 Giro hasn’t been kind to breakways, but today just might prove one for a brave group of souls.

Some racing related news to hit the wire this morning – Liberty Seguros has yanked their sponsorship, effective immediately, in the wake of the Manolo Saiz doping affair. More and more subterfuge is rising to the top, and one would think the ramifications of the arrest of Saiz and some other cycling luminaries will play out for some time. Even Ivan Basso had to distance himself from one of those implicated – Dr. Eufemanio Fuentes, with whom Basso has done some work.

But the race went on. 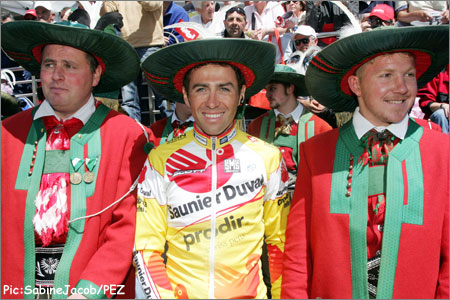 And oh did the race go on. Gilberto Simoni was treated to some Tirolian hospitality at the Start in Sillian.

The morning went as one might expect, with a flurry of attacks trying to establish a break off the front. It took over 100km until we had a solid, steady break off the front. The protagonists were Jose Ivan Gutierrez Palacios (Caisse d’Epargne-Illes Balears), Stefan Schumacher (Gerolsteiner), Marzio Bruseghin (Lampre-Fondital), Charles Wegelius (Liquigas) and David Lopez Garcia (Euskaltel-Euskadi), and they built a steady lead of almost 7 minutes.

It was clear that the bunch was not about to get worked up over this breakway, and seemingly took it easy as the stage went on, tackling the Forcia climb as a group, although it did indeed hurt some of the riders. There have got to be some tired legs out there, and that climb did break some legs. 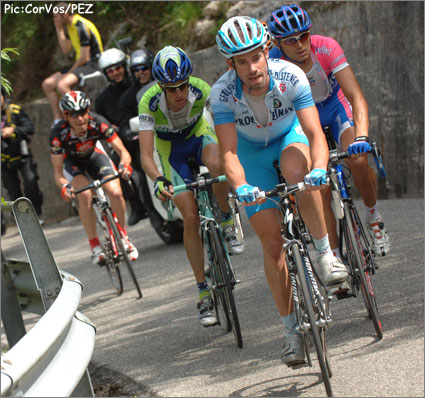 The break went straight to work early on and cooperated well until the final 10k – Stefan Schumacher did an incredible job keeping the group together in the waning kilometers to give himself a shot at the win.

The break’s gap began to come down, as the riders therein had moments of inconsistency. With about 15km to go the Euskatel in the break, David Lopez Garcia, had had enough and he emancipated himself from the others. As Schumacher of Gerolsteiner took up the chase, the rest of the break began to splinter, obviously a bit knackered from the efforts of the day.

Behind, the group beavered away at the lead, under the guidance of Jens Voight and the CSC team. But at 7km left, Garcia was joined by Schumacher, and the others of the break floundered a bit, roughly 10 seconds back. It seemed that the break would indeed stay away. The winner would come from this front group. 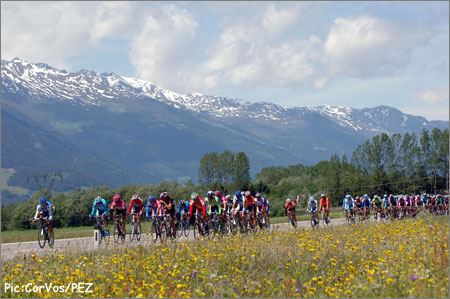 The field was fairly content to let the break have its day in the sun.

The break played human accordian for a moment, but came together with a few k to go. Shumacher, Guittierez, and Garcia tried little ploys off the front. Then, out of nowhere, the seemingly completley blown Charlie Wegelius launched himself off the front. Amazing stuff from the Brit, after having been beaten up so bad in the kilometers before. Alas, the German strongman from Gerolsteiner managed to counter the last moves and win the sprint.

A tame stage today, but surely there will be more fireworks ahead as the mountains loom once more. 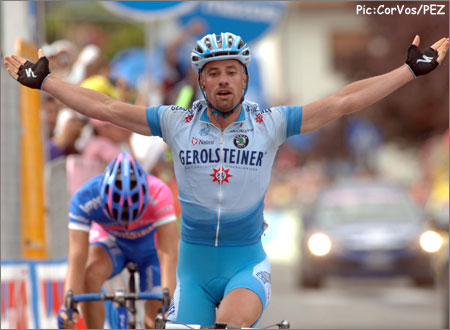 Stefan Schumacher made himself the fourth multiple stage winner at this year’s Giro, along with Leonardo Piepoli, Robbie McEwen, and Ivan Basso.

Dario’s Giro: Getting Through The Mountains