The Giro stood up on its hind legs today and dealt haymakers to the peloton today, forcing the riders over a demanding 224km, covering several formidable mountains and ending with the vaunted, mystical Passo di San Pellegrino, an 18km climb, with an average grade of 6.2% and a strength-sapping max of 15%. Luckily for the riders, at least they had the weather in their favor, as the skies were sunny and the temperatures agreeable. 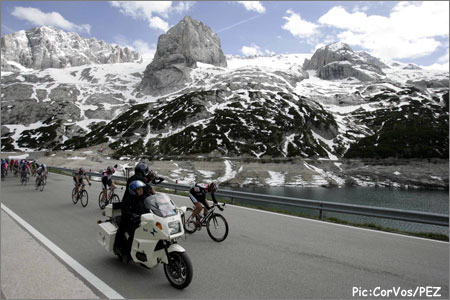 CSC set a quiet pace on front for most of the day, until Saunier Duval came to the fore later on and ramped it up a good bit.

The rest of you, please RSVP if you can’t make it. 19 brave souls. And how lucky for Voigt and Julich just to play policemen? On second thought, no one would be lucky given the jagged terrain to be traversed.

Through breathtaking beauty the break ploughed on, it was all up and down today and it was vests on, vests off, with very little flats to catch a breather on. As the Panaria rider Baliani pushed the pace up front, the break began to lose riders. Oddly enough at the same time, the CSC machine was starting to force riders in the peloton to implement their own reverse attacks. as the klicks went on, the break whittled to 13, the dropped meandering their way back to the bunch.

In other related news, it seems the Liberty Seguros team was undaunted by its leader Manolo Saiz being temporarily apprehended with 60,000 euros and later a bag of blood, and has decided to keep racing in the same jerseys, despite the title sponsor Liberty ending their sponsorship yesterday. This black eye on cycling might take some time to heal. The Liberty riders have no one in the break, but why should they? 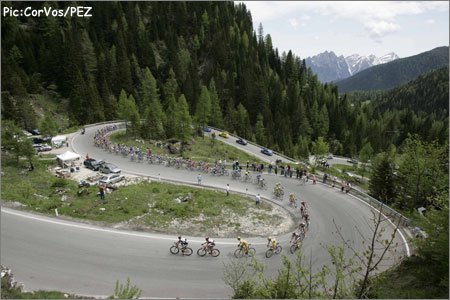 The climbing in the Dolomites is fairly mundane, few curves, highway grades, wide-open, nothing to look at.

The break had pressed on even harder under the tutelage of Baliani and without a few of its originators (Paolo Bettini, Bobby Julich, Addy Engels and Theo Eltink), and extended its lead to almost six-and-a-half minutes, as the peloton readied itself for the second to last climb. They descend from it, and the Pellegrino loomed to take the riders to the finish of this brutal stage.

The breakaway made its way off the final descent of the day with five-and-a-half minutes on the field and entered the little town of Cencenighe Agordino, facing facts that it was all up to the finish. Whew. This all a little over 6 hours into the race and still an 18k climb to go. What a brutal day! 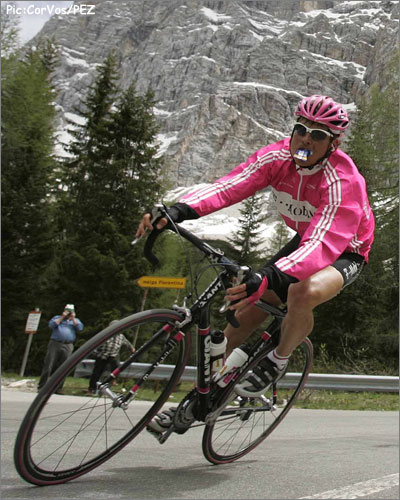 Jan Ullrich called it a Giro late in the stage today citing back pains.

At the base of the climb, the break still had a fair amount of time in hand, and the antics began. Juan Garate of Quick Step-Innergetic went to the front, poised and looking rather determined to make the most of his chance in the breakway, while the marquee names of the Giro made their way to the front of the peloton behind, in preparation for the climb.

In the break, Valjavec made a jump, only to be quickly joined by Jens Voigt. Voigt was immediately voted as very unlikely to take the stage win, but it seems many forget how unbelievably fast the big German can go uphill…anyone remember Lance and Voigt on Brasstown Bald, or perhaps Voigt’s dominating performances on the Mont Faron in the Tour of the Mediterranean. That’s not much of a climb though is it…? 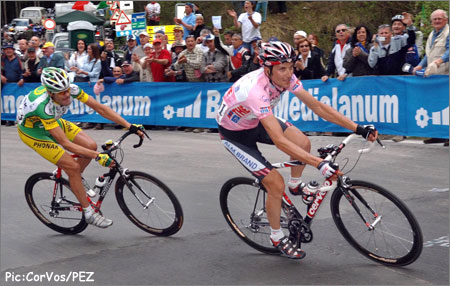 Ivan Basso was once again unpressured in today’s stage, but Jose Gutierrez sure was.

Ivan Parra and Vila decided they wanted to join the party, too, and moved away from the others in the front group. They dangled as the two V’s, Voigt and Valjavec built a 20 second lead. Soon Garate found new legs and surged ahead to join the boys up front, but as soon as he made it Valjavec went again, putting the hurt on. Voigt closed the gap and then Garate saw his chance and jumped. Soon just Voigt and Garate were away. 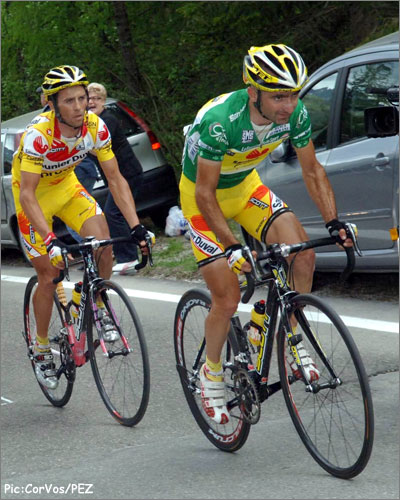 Gilberto Simoni must not know what to do with himself now that he has a rider that will ride 148,000% for him. Hopefully he’ll return the favor soon.

Back in the peloton, it was Leonardo Piepoli setting the pace, and hurting a lot of guys in the process. The group thinned until the usual suspects were together. Simoni, Basso, Cunego, Gutierrez, Cuapio, Pena and Caruso set themselves apart as the others were resigned to get up this beast of a climb as best they could. The leaders’ time gap was dwindling, down to under 4 minutes with 5 k to go. 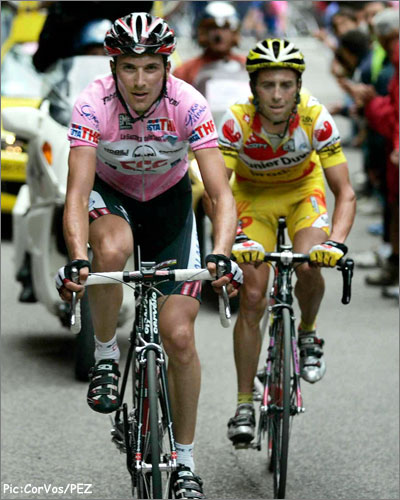 Gilberto Simoni was back and raging on the Pellegrino, but he wasn’t able to make up any substantial time on Gutierrez, even with the help of Basso.

The incessant attacking by Simoni and Piepoli finally caused a nuclear meltdown from Gutierrez, who for one moment looked like both wheels flatted and both legs had left for the beaches of the Costa del Sol. All looked lost, but the surprise of the Giro kept on surprising, as he quickly regained composure, found his legs in the woods, and rocked ever upward, limiting his losses in admirable fashion.

Soon only Simoni and Basso were alone at the front of the favorites, the others faltering. Race radio reported the abandon of Jan Ullrich with apparent back problems. Uh oh. 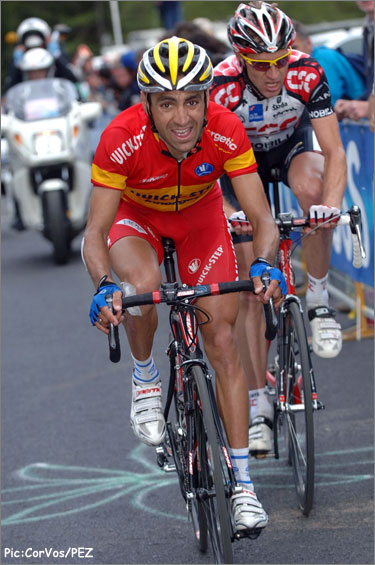 Garate and Voigt formed an able pair for the second half of the climb, with Garate doing the lion’s share of the work, as Voigt’s pink obligations were behind him.

Under the 1k to go kite, and Voigt and Garate powered on. As the line approached, Voigt, after having a word with with the team car via radio, patted Garate on the back, left the sprint uncontested, and Juan Manuel Garate took the win on this horrid day. He pointed backwards to Voigt after crossing the line, acknowledging the German and his decision not to sprint for the win. 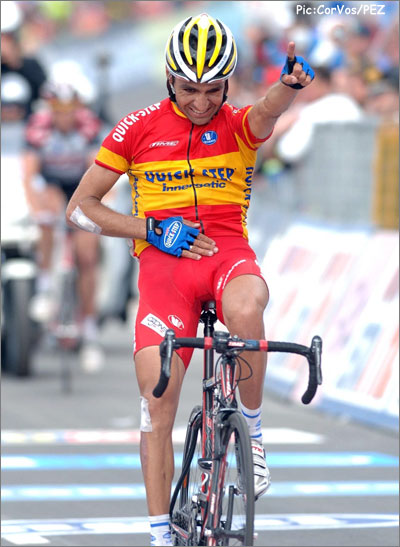 Garate was almost in tears over the line, a beautiful sight and a beautiful gesture from Voigt.

Vila, Valjavec, Selle, and Parra rolled through in that order, closely followed by Simoni and Basso, at 2’15”. Gilberto Simoni certainly solidified his 3rd place on GC, putting more time into the GC 4th placed Savoldelli, who was somewhere behind, being shepherded up the climb by Tm Danielson.

Dario’s Giro: Life In Front Of The Field