After the atrocity that befell virtually all riders over yesterday’s horrendous stage, the final jaunt into Milano had to have been looked forward to like an 8-year-old looks to Christmas. There would be no split stage this year, just a hectic bunch sprint in downtown Milano.

A collective sigh of relief must have been the theme this morning, as the 151 survivors of this year’s mountainous Giro started atop the Ghisallo and headed mainly downhill into Milano. 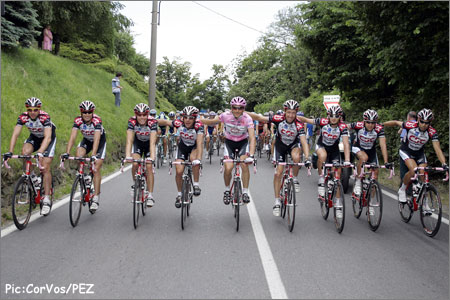 The pace was pretty tough early on, with CSC forming a moving wall on the front.

Of course, the first part of the day was obscenely slow. It wasn’t till about 67k in that some sort of racing occurred as the 110 Gazzetta Sprint popped up on the flat run-in to Milano. Paolo Bettini took the sprint and with his 4th place in the final sprint (oops, did I give something away?) – secured the Maglia Ciclamino – the Points Classification.

Immediately after the sprint, Gabriele Missaglia countered and rode off to a 3 minute gap and probably ired some tired legs in a big way. Who attacks before the finishing circuits? He probably got an earful when he was brought back into the mass 15k later. So let’s see…he rolled out to a 3:10 gap in 8k, and gave his three minutes right back in 7k. That’s hilarious. Good work…brah. 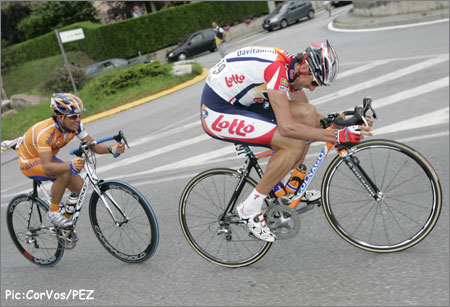 Thankfully, Missaglia was brought back just in time, so CSC could get its honorary moment on the front as the race rolled into Milano and the finishing circuits: 11 x 4.8k.

Inside three laps to go and the pace was finally hotting up to lined out proportions, and still it was CSC doing anything and everything on the front. The pace just kept getting faster and faster and faster, and always the Black, Red, and White of CSC – no one attempted to mess with the train, it was rolling, and rolling swiftly. 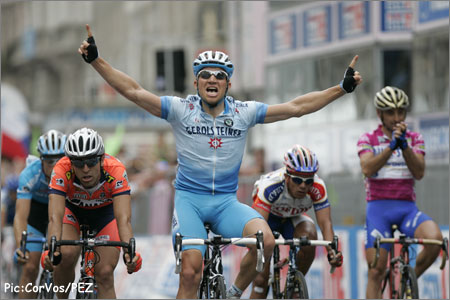 Gerolsteiner capped a great Giro with a win on the final day from Forster.

Inside 2k to go and a Milram rider exploded off the front, and his journey as Numero Uno on Stage 21 lasted all of about 30 seconds before being absorbed and tossed backwards. Under the final Ultimo Chilometro of the 2006 Giro, Sven Krauss took the honors of of keeping the pace, um, fast? Milram tried to come around and pulled it off for a moment, then tried a weird attack-like move, but it all came to naught as the sprint opened up.

Finally, it was Gerolsteiner’s Robert Forster who rode a perfect sprint, keeping tight against the barriers, effectively closing the door on Paolo Bettini, who was once again not so happy about missing the win. Some call Bettini a poor sport or a baby, but man, he’s got some emotion, no stone-faced salutes from the little character called Il Grillo. 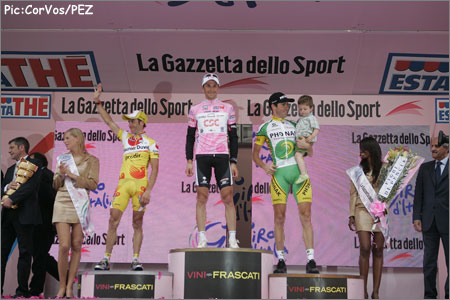 Ivan Basso took the 2006 Giro by a long, long way, almost 9.5 minutes over Jose Gutierrez and 12 minutes ahead of 3rd Place Gilberto Simoni.

So that was that, after 21 stages, the race is finally at an end. Ivan Basso won the overall by about 3.5 days, Jose Gutierrez limped in about a day ahead of Simoni and everyone else was about 3 weeks behind after that.

Quick.Step, had a quietly successful Giro – taking the Points Classification (Bettini) as well as the Mountains Classification (Garate), a couple of stage wins, and 7th overall. That works, right?

Gerolsteiner didn’t have a bad go either…3 stage wins (Schumi, Schumi, and Forster). Saunier Duval nabbed two stage wins, Davitamon got three from Robbie Mac (did that happen this year? Feels like ages ago). Oh, CSC took three stage wins and the overall, but who’s counting?