Well here it is! The first leaders jersey of the first Grand Tour of 2006. The Giro d’Italia starts today in the Belgian town of Seraing, 6.2 kilometers with a bit of a climb in the middle of about 2.5 kilometers long and then downhill to the finish, not too technical. Eyes down and we’re off!

The last time the Giro d’Italia started in Belgium was in Verviers in 1973, that year a certain Eddy Merckx won a two-up time trial, towing a poor Roger Swerts (what did he do to deserve that?), Merckx took the first pink jersey and held it all the way to the end, I don’t think that will happen this year, but you never know! 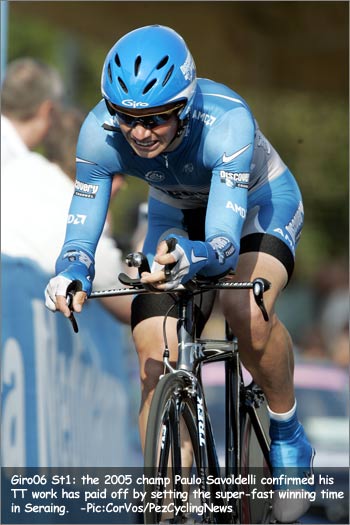 First man off was T-Mobile’s Frantisek Rabon on a nice warm day, early leader, Philippe Gilbert of F de J covered the course at nearly 44 kilometers an hour in a time of eight and a half minutes. His time holds good until Marzio Bruseghin of Lampre-Fondital shows how it’s done and comes in with a top time of eight minutes and ten seconds, this is good until about half past 4 o’clock when Paco Perez of Illes Baears took the lead as the news that Jan Ullrich had left the start box to finish with a time of 8.39, which is not so bad for the BIG fellow.

Another big bloke – Axle Merckx sets off, don’t think he will emulate his dad to day, his bike was going fast but not as fast as the FdeJ bike that falls off the roof-rack and hits the crowd, RAI (Italian TV) are showing it in slow-motion now for added excitement. They also have pulse monitors on riders, Pinotti is on the climb at 95% with a pulse of 195 and gets a finish time of 8.27, not fast enough, but I bet his legs hurt with that effort.

The stars are starting to do their bit, now it’s Jens Voigt (CSC) he comes in with a time of 8.15 to take third, the next up will be Honchar (T-Mobile), he’s pushing a big gear and goes fastest so far with a 8.05, but not for long as Stefan Schumacher (Gerolstiener) takes the lead with a time of 8.03, he is asked afterwards if he is normally a chrono-man? “I’m good against the clock, but I think I am a classics-man”. 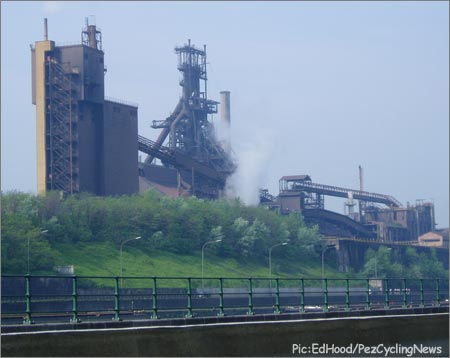 Next up PEZ-Diarist Dario Cioni has a pulse of 185, but is not going fast enough and clocks in for 23rd place. World time trial champ, Michael Rogers (T-Mobile) is out of the box, he wants to win this one and Bettini is chasing him on a normal road bike with a rear disc wheel. Tom Danielson (Discovery) rides well to get an 8.11, which is good for the young lad, not far off the pace, Rogers comes in 4 seconds slower than Schumacher and Bettini 29 seconds adrift.

Phonak’s Gutierrez does a flyer to equal the time of Schumacher, but it’s not on top for long as Brad McGee (FdeJ) takes the lead with 1 second more than eight minutes, but says he feels he will not hold the lead as there are a lot more riders to come in.

Last man off Salvodelli (Discovery) is away as Simoni comes in with a time of 8.16 at 45 kilometers an hour, then the other Gutierrez (Illes Balears), Spanish TT Champ gets 6th place and then Cunego comes in to beat Simoni by a second, Basso looks good for a 8.13 and not many left to come in.

Who is this? It’s Savoldelli, he’s flying! … crosses the line 11 seconds faster than McGee in 7 minutes 50 seconds, will he emulate Eddy and hold the jersey until the finish? Maybe not, but he might lose it and get it back again.

Tomorrow’s stage is to the town of Charleroi, with the little climb of Silenrieux, Charleroi was made famous for its street market that sells pre-used training shoes, singularly!