Another day for the fish on the Giro d’Italia in “sunny” Belgium, after all that rain yesterday, yes you guessed it more of the same today, so bad that the TV coverage was minimal, but the excitement was still there for the finish.

It was a day for punctures and crashes just like in 1973, the last time the Giro came to Belgium. That year it rained also, but the problem was not the weather but the riders fighting for positions in the sprint. That day became known as the “The Battle of Strasbourg” at 60 kph riders were pushing and punching, in the end Italian rider Riccomi ended up in hospital and there was a punch-up between top sprinters of the time, Basso and Karstens.

Today’s stage three action is from Perwez and Namur, 202 kilometres with two climbs, the Evrehailles and the Cфte D’Ahin, this being Belgium there are some cobbles and an uphill finish.

Early action had four riders away, Raffaele Illiano (Selle Italia), Amael Moinard (Cofidis), Markel Irizar (Euskaltel), Moises Aldape Chavez (Panaria), with 100 kilometres to go they had three and a half minutes lead and behind there were punctures and crashes galore, amongst them the pink jersey Paolo Savoldelli punctured but easily got back on. 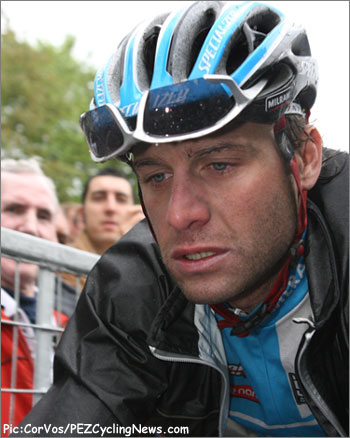 Alessandro Petacchi had an absolutely horrible day, crashing and apparently hurting his knee. Hopefully he doesn’t pack it in just yet.

Fifty kilometres to go and Petacchi has crashed, he needs a new bike and a lot of teammates to get him back on. At the front the four riders had now only 1:20 and it looks like it a matter of when will they be caught – not if. Quick-step are doing the chasing for Bettini as Petacchi makes contact at the back; Bettini has said (again) that he wants to do something today, bit like yesterday!

As the rain gets heavier the breakaway group have gained a little with 27 kilometres to the finish after more than four and a half hours of racing. Petacchi is sitting at the back and not looking happy, his knee is bad and is calling for the doctor, but carries on with three teammates with him as they struggle on to the finish in the time limit.

It’s all together (except Petacchi) with about 20 kilometres to Namur, Liquigas, Quick-step, Saunier Duval, CSC and Lampre are on the front, but not really pushing it too hard. 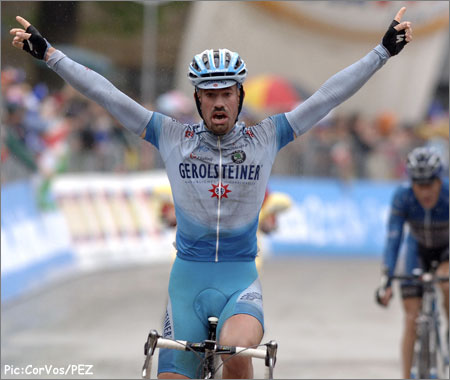 Stefan Schumacher pulled off an incredible victory to take the day and Pink right off of Il Falco’s shoulders.

Jens Voigt of CSC puts the hammer down and the speed goes up to 70 kph in the last 5 kilometres and a lot of riders are in trouble as at last the action warms up more than the weather! Sharp bends and fast riding sort out a lot of riders, it’s possibly 25 riders left to contest the finish climb of the Citadel, 2.3 of climbing kilometres to be done and Rubiera of Discovery attacks and is chased and caught by Schumacher (Gerolsteiner) and the two stay away from the others, including team leader Rebellin.

A horrible day but an exciting finish, bodies everywhere just like in 1973 but for a different reason, Stefan Schumacher is in form and there were a few who lost time today (Petacchi big time), Savoldelli came in safe at 6 seconds but lost the lead to Schumacher. Savoldelli might have lost the Maglia Rosa, but he pulled a classic Armstrong move today by being super-attentive at the front – he managed to pull off another 7 seconds from a lot of the contenders – Basso, Di Luca, etc. This race probably won’t come down to seconds like last year, but a few seconds here and there won’t hurt – Savoldelli already has 30 seconds on Basso, it’ll be nice to cash that in somewhere down the road.

Tomorrow is a bit lumpy for 193 kilometres from Wanze to Hotton – a bunch gallop should be the order of the day. All eyes will be on Petacchi to see whether he recovers from the chaos of today’s stage. It will be interesting to see just how long the 24-year-old Schumacher can hold onto his Maglia Rosa – you can bet that Gerolsteiner will defend every bit of his lead from here until it ain’t possible anymore. Schumacher can acquit himself very well in bunch sprints – perhaps he can get up there tomorrow and nail down some bonus seconds and give himself a little more cushion going into the team time trial on Stage 5. 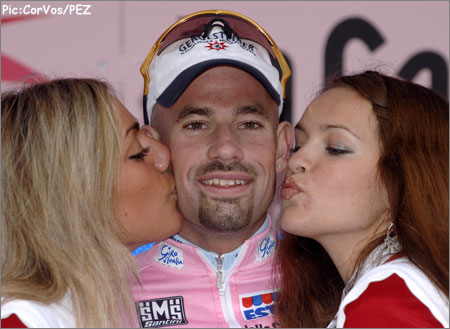 Schumacher could be in pink for a good little stint, at least until the TTT on…oh hell…that’s on Stage 5. Well, hopefully till Stage 5.

Rider Comments – Compiled by Michele Tomasi
• Stefan Schumacher (Gerolsteiner): “At the team meeting before the start, we decided that there were 2 men who were going to win this stage: me and Davide Rebellin. I’m really glad to have won this stage, but now I don’t know what to expect from myself, as this is my first Grand Tour. We will see day by day”.

• Paolo Savoldelli (Discovery Channel): “I’m glad with how today’s stage went, as my main objective was not to lose any seconds on the other rivals and especially not crash. I did it and also gained some more seconds on them. Couldn’t ask for anything better! How do I see them? Well, they all look fine, we’re still at the start, and anyway for example in the prologue they didn’t lose so much. It has just been me who did something very good, a surprising performance. Schumacher? He seems a very strong rider, as he did a very good performance also the other day at prologue”.

• Paolo Bettini (Quick Step): “I must thank my team mates as they worked for a whole day, almost 200kms. My goal was to win today with this finish but couldn’t do it. It can happen…this is how it goes sometimes with racing! To tell the truth, I got a bit upset because exactly when I was sprinting to close the gap on Rubiera, I got a scooter of the organization exactly in front of me and…got to stop! Then I couldn’t react quickly as I had a very long gear and in that moment Schumacher went away. I waited for someone else to work, but unluckily with me there were Savoldelli and Rebellin who had both a team mate ahead!”

• Danilo Di Luca (Liquigas): “I didn’t see well the finish as I was a bit behind, but by what I heard this Schumacher did a good performance and it seems he’s strong at climbing too. Perhaps we will need to keep an eye on him too! About me, we should wait when we arrive in mio Abruzzo, as we will pass on a climb that I know very well, very steep. In there will have the real first test”.

• Eddy Merckx: “It’s still too early for talk who are the favourites, as there are now 4 men who could win it. I think we must wait the last week, a very hard week, to be able to see who could be the real top favourite”.