Ten stages down, and still 11 straight to go. The real fight starts now, as the true race begins tomorrow with a TT and then heads into the mountains for day after day of pain and suffering – Basso is in command, but anything can happen over the 6 mountain stages and 4 summit finishes. The fun is just getting started – here’s where the real racing starts…

Coming Attractions: Stages 11-21
The first stage back will be the much-hyped 50k Pontedera ITT. This will of course provide an opportunity for the time triallists to swipe some time from the little people. The obvious advantage goes to Ivan Basso, whose time trialling has improved to such an extent that he is arguably one of the top three Grand Tour time triallists. Paolo Savoldelli should be able to grab some time back, but probably not from Basso. Gonchar will do well, and Simoni, Cunego, et al, will lose chunks of time – the only question is how much. 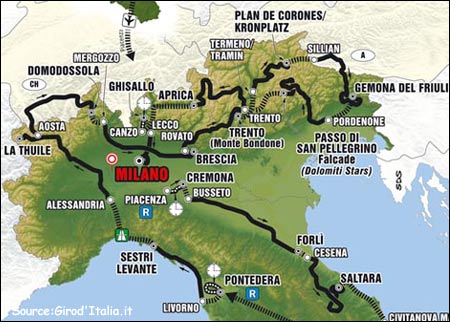 There’s blood in them thar hills…! – The last half of the race – all mountains and no rest days.

The TT strategies will be simple: go as fast as you possibly can. If the rider is a good time triallist (ie Basso, Savoldelli) rip as much time off of the rest of the contenders as humanly possible. If the rider is either piss-poor or passable (Di Luca, Cunego, Simoni) then their job is to limit those losses to as little as possible. The non-time triallists will have to reconcile themselves with the fact that they should lose between 2 and 3 minutes.

Thursday’s Stage 12 is a 171k transitional stage heading north from Livorno to Sestri-Levante along the Ligurian Sea. The stage could favor a breakaway, but could also provide an opportunity for Paolo Bettini’s much sought after victory, as the Passo del Bracco with 19k to go should get rid of some sprinting chaff and help Bettini – Quick.Step will probably do a lot of work on the front the whole day. 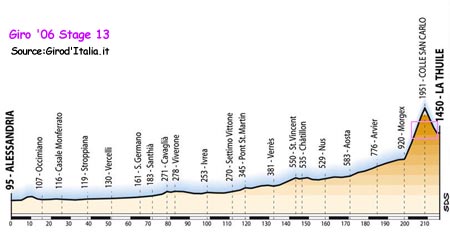 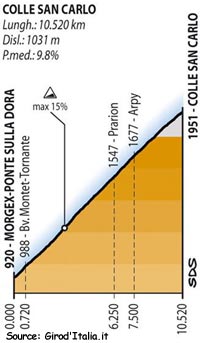 The race hits the mean Colle San Carlo in the closing kilometers, and though it doesn’t finish there, it’s only a short descent to the finish over the top – so time gaps should remain fairly stable. If Savoldelli goes over the top with the leaders, he could well win this stage.

Stage 14
1400 meters of elevation gain over 20k, then just under 50k of downhill to the finish. This stage will be followed by the easiest day of the Giro so far – the first truly flat stage – Stage 15. 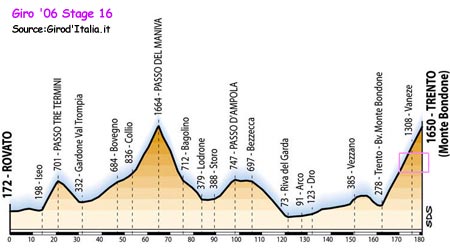 Yessir, the Bondone will be a tough one – 18k, 1400 meters of elevation gain. If you can’t get some time out of an opponent over 18k of climbing, especially on the Bondone’s epic slopes, it’s not to be had – at least not on THAT day. 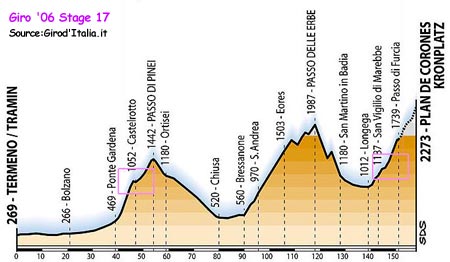 Stage 17 is arguably the most talked about stage of this year’s Giro. If it weren’t for the final 7k, it probably wouldn’t be that big of a deal. 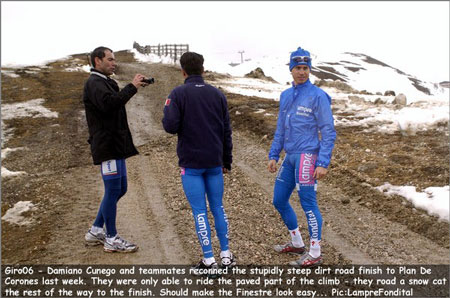 At this moment, the final 7k are a muddy path of steepness. Apparently, the Giro organizers thought this could be a bad thing and have been working night and day to prepare the road for the Giro in about a week’s time. The final 7k to the Plan de Corones, or Kronplatz, (since it finishes in that part of Italy, which many still think of as Austria…Austrian’s call it the Suedtirol) is ungodly steep with pitches upwards of 24%. Teams are speaking of insane gearing: 33×29?!?! 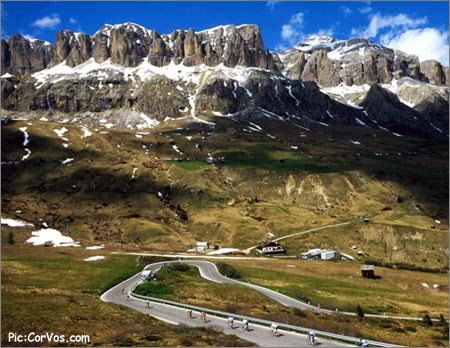 Oh, and there’s the Erbe as well, but it’s only single digit steep. 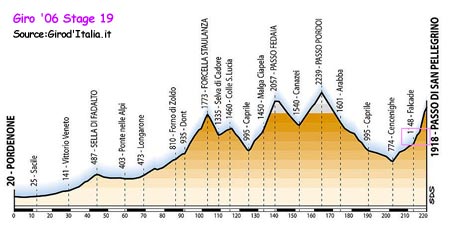 In any other Giro, the final two days in the mountains would be considered insane, but at this year’s climb-fest, they’re just two more days in the mountains. The San Pellegrino is the mountaintop finish of choice for Stage 19, it’s preceded only by the Forcella, Fedaia, and Pordoi – that is going to be a very mean stage…almost as mean as: 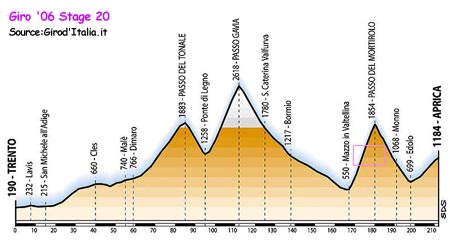 The penultimate day of the 2006 Giro will be yet another brute, this one takes in the big boys: the Tonale, Gavia, and Mortirolo, before heading uphill to the finish in Aprica. It probably won’t provide as many fireworks as last year’s penultimate event over the Finestre, but it should still be a fine show. 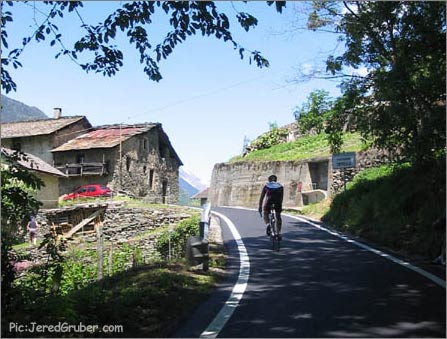 ** PEZ will be live at the final week – riding as many of those passes as time- and legs – allow. Stay tuned for more…