It’s just a couple of days until this year’s heroes set off on La Corsa Rosa, and in keeping with previous Grand Tours, Pez CyclingNews casts an eye over the names in the frame with our exclusive preview – Italian Stallion or Dolomite Donkey!

There are a couple of obvious stand-out names in the field for the Giro aiming to get their names back on the roll of honour, so let’s check them out first.

Gilberto ‘Gibi’ Simoni is the defending champ, and will be looking to carry on after last year’s domination. Simoni looked like he might have overdone the winter relaxation and was pretty slowly out of the blocks this season. But the last couple of weeks have shown that he’s where he should be. He was good at the Giro del Trentino and launched a strong attack at the Giro del’ Appenino over the weekend. But will he be able to keep that pesky kid, Cunego, in check? Verdict: A pure thoroughbred Stallion! 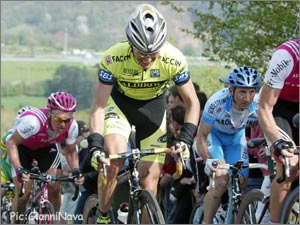 Garzelli will have to keep his head down and hope his legs can do the talking in this Giro.

It seems a long time since Gibi’s big rival Stefano Garzelli won the Giro – 4 years – but fate didn’t do him any favors after a ‘contentious’ positive dope test a few years ago. But the Vini Caldirola chief has been going well, with an uphill stage win in Romandie last week. He’s the big star on the team, with loyal domestiques. Last year, he was only just back in competition at the Giro, and came up just short. He’ll be way stronger in 2004. Verdict: A stallion who should make the winner’s enclosure!

Another year older, another year better. That’s Yaroslav Popovych, who is curiously not listed as his team’s number 1 rider. Could it be a ploy to make sure he can slip the attentions of his rivals? We haven’t seen much of the young Ukrainian (still only 24, and SO talented), but that’ll change over the next 3 weeks. A solid bet to shake things up. Verdict: An unbroken stallion who could be in for a ‘Bonanza’ year! 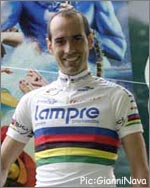 Now, some people have the notion that the World Champion’s rainbow jersey is kinda cursed. So what does Igor Astarloa do to disprove the theory? Find himself signed to a new team and unable to get a better deal once he’s won the Worlds. Then find that team suspended from his key target races of the spring because other people got mixed up in a bit of ‘stuff’. Igor has only just escaped from Cofidis to the safer shores of Lampre. 2nd in his comeback race, he looks good for a stage win, at least. Verdict: A Seabiscuit to overcome all the odds?

Pavel Tonkov has barely missed the top 10 since he started racing the Giro, and even at an advanced sporting age, should be challenging for a decent position this year. A valuable and experienced helper for Garzelli, he’ll look to cause problems for others and snag a stage win. Verdict: Champion the Wonder Horse – the paddock years! 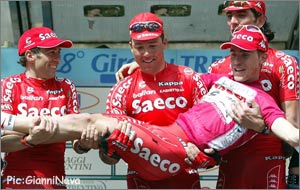 Italy’s new darling is Damiano Cunego, and if his meteoric form continues, we may have a Bartali vs Coppi type squabble if he starts to look strong enough to derail Simoni. The boy can’t stop winning right now, so Saeco might hope to get him into the Maglia Rosa for maximum press coverage, and minimal pressure on Simoni. Verdict: A precocious young talent – a touch of the International Velvet about this one.

Davide Rebellin is in the form of his life and has made no secret of his desire for a stage win and a spell in that famous pink tunic. Not sure it would go with those Gerolsteiner shorts, but, hey, what do I know coming from the fashion backwater that is the British Isles. The now parasite-free Rebellin should grab a couple of stage wins easily. Verdict: Pegasus grows new wings!

That pretty much wraps things for the overall, but there’ll be a hell of a lot going on elsewhere with a full-on sprint battle expected.

How about this for a line-up?

Petacchi vs Cipo’ vs Svorada vs McEwen vs Quaranta!

Petacchi has looked beatable on occasions this year; Cipo’ has won a couple of times; Svorada’s in good form; Robbie Mc shouldn’t get into any fights this year as Graeme Brown isn’t starting; and Quaranta might get beyond the opening time trial, so those early stages will be fascinating.

Add in the likes of Magnus Backstedt and Giuliano Figueras looking for stage wins, and the Colombia Selle Italia boys trying to shatter the peace in the mountains, and we’ll have a gripping 3 weeks ahead.

And, of course, the best place to catch the news is right here with the Pez!