The first flat stage proved to be a sprinter’s bounty, as all the fast men were factoring into the final few k’s, with Italian sprint horse Alessandro Petacchi taking the day.

Today’s 143k stage from Genova to Alba met the riders with a mostly flat course, favorable winds, and a whole bunch of big names inside of a minute to one another in the overall general classification. FDJeux’s Bradley McGee started the day resplendant in the leader’s Pink Jersey, beaming like a schoolboy. He stood a good chance of holding the jersey, but the time bonuses awarded to the first three places of the stage could possibly throw a fly in the Aussie’s ointment. 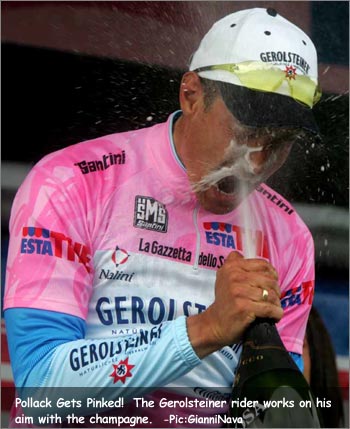 While the typical suicidal attacks went off for most of the day, none were too successful, save for that of Marlon Perez (Colombia-Selle Italia), who dangled off the front for a good portion of the race after the 69km mark.

After the peloton reeled Perez in, the end came in one big bunch, and it was as all had expected with the premier sprinter’s teams hammering away at the front: Domina Vacanze and Fassa Bortolo, along with interlopers in the form of a curious Robbie McEwen and even world champion Igor Astarloa peeking into the front of the group. Svorada also lurked. 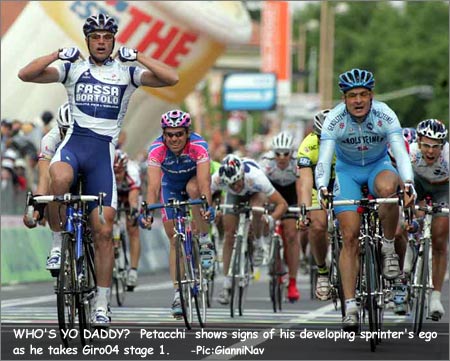 As the argy bargy intesified in the last km, Cipo’s move to Petacchi’s wheel misfired, and he ended up behind McEwen, who had trouble finding daylight. Olaf Pollack jumped into the gap and took second, behind a strong finish by none other than Alessandro Petacchi.

Pollack’s fine 2nd place gets him the coveted maglia rosa from McGee, as we head into Stage 2 tomorrow.