It appears that Damiano Cunego isn’t the only young gun firing in the Giro this year. 23 year old neo-pro, Emanuele Sella of the Ceramiche Panaria-Margres outfit took an audacious solo victory after going it alone with about 45 km remaining in the very hilly stage. Did I mention that comparisons to Pantani are flying like pollen in spring at this point? Sella is indeed a climber in the mold of Pantani, a whole 5 and a half feet tall, and seems to possess that special knack to pull off the improbable, not to mention winning front and center, solo in il Pirata’s hometown.

Stage 11 of the Giro was the second longest of this year’s Giro and presented very few difficulties, if any, until the final 70 odd kilometers in which the parcours went from coastal flat, dull, and boring to Ardennes madness with numerous short, steep climbs whose grades often resembled a high-schooler’s age.

As predicted by many, breaks were the name of the game today, with a constantly changing large break ahead for nearly the whole day. Sella joined in the fun with his teammate Brett Lancaster with only 55 km to go, so he arrived fresh, and evidently didn’t like the company he was associating with, so on the Passo delle Siepe, off he went with about 45 km remaining and far too many evil little climbs to count.

He was virtual Maglia Rosa on the road at one point, but ended up taking only 49 seconds out of most of the favorites, moving himself up to the very respectable 10th position in the general classification, whilst thoroughly enjoying his first Giro victory. 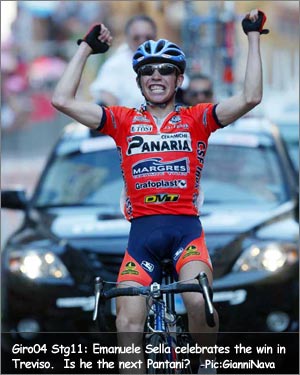 But What About Da Contendas?
Sella’s performance on the day was without a doubt the headliner, but what happened in the main field of favorites was interesting as well. Simoni continues to show himself as quite strong in these early minor stages of the mountains, as is the “other” future Pantani, Damiano Cunego. After becoming relatively isolated at some points during the stage today, Simoni took over the responsibility himself and did the pacemaking on his own. This was the first stage in which the Red Train of Saeco looked a bit vulenerable, but in the end Simoni came to the finish with a decent posse of red in tow. 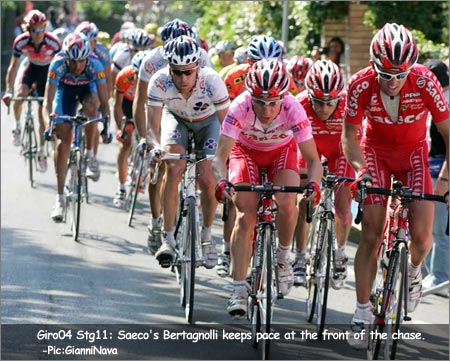 Simoni doesn’t seem content to lay low like some other favorites (ie: Pellizotti and Popovych), repeatedly attacking throughout these early days of the Giro. Cunego and Simoni combined to put some serious pressure on the remaining 30 riders with a few kilometers to go, which had the desired effect and sent Garzelli packing.

Stefano Garzelli does indeed appear to be shaky – he was shelled two different times today. Ah, but shaky and not looking good don’t mean all that much right now, as Garzelli got back on terms quickly in each case, but that can’t be a good omen. It would be an error though to write-off Garzelli so early.

Where Garzelli looks shaky, Bradley McGee looks anything but. McGee continues to astound, and it was McGee’s attack which ended up completely destroying the lead group on the Muro di Sorrivoli – one of the main victims was none other than Garzelli. McGee currently sits in 13th on the GC, and with a solid ride in the time trial, a return to the Maglia Rosa could be possible, but before the stage 13 time trial, comes stage 12. It’s not just McGee though in with a chance at glory in the upcoming time trial — after the day’s stage there are 10 people within 1:30 of young Cunego’s lead, still a wide open affair.

Tomorrow’s stage will be a long, perfectly flat, drawn out affair of a stage, which will not have any effect on the GC, but will give Petacchi a chance to move closer to the Giro record of stage wins in a single Giro. I’m not so good with betting, but a flat stage, looks like a sprint, would anyone bet against Petacchi?

Emanuele Sella (Panaria): “I cannot believe it! I wasn’t thinking to be able to win…and in that way! By starting so far from the finish…”

Dario Cioni (Fassa Bortolo): “It has been a very hard stage because of hot weather and because it was the longest stage of this Giro. I had a regular race, and I felt almost fine. Now I’ll be waiting for the time trial, to understand what are my ambitions for this Giro, without forgetting that I must help Petacchi”.

Some curiosities:
Emanuele Sella, from Vicenza, turned pro this year with Panaria, and he’s the lightest rider of this Giro, 54kgs!

Usually many people tease the Giro because of “quiet” starts in each stage. Well today, in the longest stage, the first 2 hours had an average speed of 50km/h! And Sella won with an average speed oh 44km/h!! And it wasn’t a flat stage at all!

Cool CULTURE: One On One Bike Shop