Alessandro Petacchi continues to make victory in a sprint finish look exceptionally easy. All roads lead through Petacchi, and it seems that not many make it by the fast man, actually only two now, out of NINE. With his record equalling seventh stage win in this year’s Giro d’Italia, Petacchi can now line up among the greats: De Vlaeminck (1975), Freddy Maertens (1977) and the last one to do, Beppe Saronni (1980), who just happened to be one of Petacchi’s idols as a youngster. 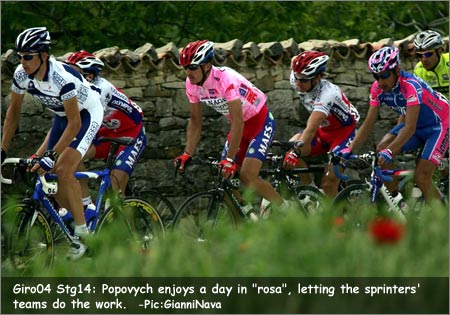 The chances of Petacchi NOT surpassing seven stage wins looks about as plausible as someone beating him at this point, and subsequently there appears to be an excellent chance of Petacchi achieving #8 tomorrow, and if he makes it through the harrowing four stages in the Dolomiti, it would be logical to place all bets on Petacchi taking a NINTH win on the streets of Milano in a week’s time. That’s absolutely frightful, nine stages in one Grand Tour.

The day was a prototypical flat stage, albeit with a few hills in the first hours. The early break lasted about 150 km with the Fassa Bortolo choo choo train doing the lion’s share of the work to ensure the sickeningly predictable at this point – a Petacchi victory.

The day was Yaroslav Popovych’s first in pink, and for the first time in this year’s Giro, his Colnago-Landbouwkrediet team had to take up the reins at the front for awhile until the sprinters’ teams came to the fore, notably Fassa and Lotto-Domo. In a rather unimpressive display of team unity, three of the team’s riders went down at the Intergiro sprint.

The break was absorbed with 9 km to go, and then it was into the finishing circuits. With 5 km to go there was a solo attack by Tenax rider Loda, who was quickly joined by DeNardi’s Gasparre, unfortunately they didn’t have a large pace car in front of them and their attempt at glory was swallowed up by the raging Fassa Bortolo tidal wave.

The one guaranteed form of sprinting entertainment these days is the fight for Petacchi’s nether-wheel. Today was no exception with McEwen at first on the Petacchi Rocket’s back, but ended up disappearing in the finale. The real fun was between Fred Rodriguez and Angelo Furlan as they tangoed for prime position, with Rodriguez ultimately taking the wheel and launching a worthy sprint for runner-up on the stage.

With 500 meters to go the nearly unthinkable happened – an attack was launched by yet another DeNardi rider, Simone Cadamuro. His attack looked promising, except for the major tumble he took rounding the final corner, which put his chances of victory on about the level of anyone else sprinting against Petacchi these days.

Cadamuro’s wreck interrupted a cheeky Acqua & Sapone move though. With Rodriguez sitting on Petacchi the Unstoppable’s wheel, his teammate Crescenzo D’Amore had taken up residence on Rodriguez’s wheel with the hopes that the duo could overtake the many times multiple stage thief, but it seems everything goes Petacchi’s way, and Cadamuro’s wreck derailed D’Amore to put paid to any chances of a Rodriguez lead-out for D’Amore.

What’s Next
No changes in the General Classification, if anything a nice day off for the Saeco team who had no obligation to do any work today. A good two days rest before the mountains will definitely do no harm to the Saeco team. Popovych was cool as a glacially fed creek as always, but definitely showed his satisfaction with his first full day in pink with a lovely shower of spumante at stage’s end.

Tomorrow’s stage appears to have been scripted for Petacchi’s eighth win of the 2004 Giro. The stage is rather straight-forward and flattish, and the stage’s only claim to fame is being the longest in this year’s Giro. Through the fog of the future, I seem to see a man in fuscia holding out eight fingers tomorrow.

Rider Comments Compiled by Michele Tomasi
Alessandro Petacchi (Fassa Bortolo): “I think I did something really great this time. I’ve been able to arrive at the same stage victory number like my idol Saronni. Really amazing! Once again it’s a team victory, because my team mates worked all day as they are doing from the start of this Giro”.

Simone Cadamuro (De Nardi): “I’m really sorry with the other guys if I crashed and wrecked their sprint, but I didn’t really want to do something like that. Of course in this kind of job you must take risks, and if you don’t… you will only be able to get a 3rd position..”

Crescenzo D’Amore (Acqua&Sapone): “I cannot understand why some people act like that… Anyway I think it should change some rules, because there are too many people going for the sprints, and not only sprinters..”

Yaroslav Popovych (Landbouwkredit): “It’s really nice to wear this jersey, and see how people look at you, and call you by name. Everyone wants a picture or autograph, and that’s great. About next mountains stages, I’ll take it easy day by day”.

PEZ Socks It To Ya!