To days 4th. stage from Porreta Terme to Civitella in Val di Chiana of 184 kilometers was run off in cold rain, it’s was leg warmers, over-shoes and even gloves. The action was controlled by Saeco for the overall leader Gilberto Simoni on a flattish course that could suit the sprinters with only two climbs. 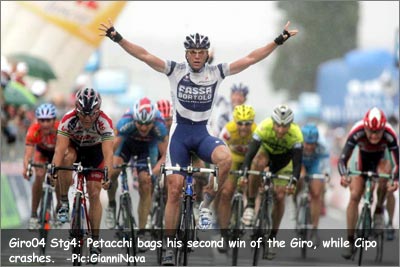 The early action was centered on what was going on at the back of the peloton with sprint king Alessandro Petacchi who fell and looked like he hit his “cajones” and lost quite a bit of time. Six Fassa Bortolo team-mates came back to help him up to the main bunch which was splitting and reforming on the small undulations with 60 kilometers to the line.

A group of six were off the front coming in to the Inter-Giro sprint at 50 kilometers to go, but with Fassa Bortolo and Saeco on the front their days were numbered as the sun was trying to dry things up for the finish. Piccoli (Lampre) took the sprint with a gap of 32 seconds on the bunch. The six were not working well together and split to leave three out-front, they were Loda (Tenax), Vanotti (De Nardi) and Aranaga (Chocolada Jacques). Through the village of Livane, Fassa Bortolo now was doing all the work to keep the three within catching distance and they were back in the fold at 34 kilometers out. 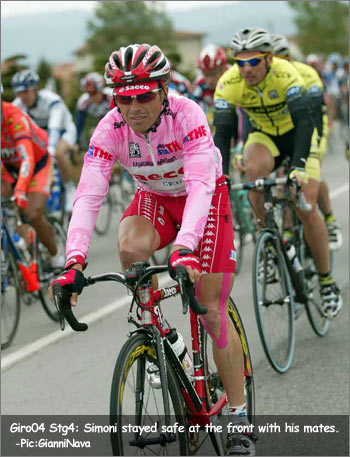 Simoni was keeping himself out of trouble near the front with all his teammates around him, including new star and point’s leader Damiano Cunego in close attendance. Through the finish past the Del Tongo factory with one 11.4 kilometer lap to go it was starting to rain again and a couple of riders ended up in a field and the bunch was in a long line with a few stragglers.

Fassa Bortolo, Domina Vacanze, Lotto-Domo, Alessio and Saeco were fighting it out on the dual carriageway for control into the finish. Five kilometers to the finish and Fassa had the lead for Petacchi, Polack (Gerolstiener) was on Petacchis wheel as Domina were mixing it for “Cipo”. The last kilo was lead out for Petacchi as a crash split the bunch as Cipo hit the ground and Petacchi took the win. 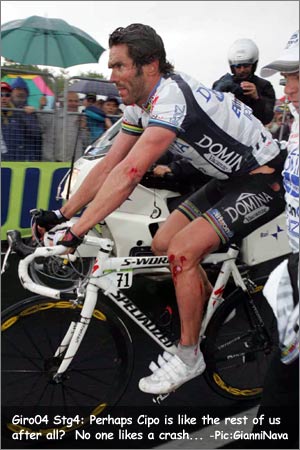 Super Mario got up and crossed the line with a face like a well-slapped arse, cuts and a dented pride as it looked like it was his own fault.

Rider Comments Compiled by Michele Tomasi
Alessandro Petacchi (Fassa Bortolo): “I don’t have any idea when the crash happened, if at 1km or at 200metres. I was ahead and I just started my sprint and closed my eyes. I had a little problem because I wasn’t able to get the 11 behind! After my crash that I had during the stage, I was feeling bad, especially on one knee, and I was worried. I didn’t want to go on siuntil nce the doctor told me that everything was ok. Then the pain went away. I asked my team mates to stay ahead and keep the speed high because I was worried about more crashes in the rain. Then everything went perfect!”

Mario Cipollini (Domina Vacanze): “Aug passed in front of me and we touched. It was just a second. If I’ll go on? I don’t have any idea now. We will see later, after a visit in the hospital”

SuperMario got 5 cuts on his leg, and it’s not sure yet if he will continue or not.

Gilberto Simoni (Saeco): “I saw the crash as it was right in front of me. I tried to break but couldn’t stop! Luckily I got a hole where I passed..”