GIRO Stg 13: Popovych In The Pink

It was a coming of age for the fresh-faced Ukrainian Yaroslav Popovych this afternoon. 2 years of careful nurturing gave him his first ever Maglia Rosa as he produced a fine ride in the 52 km time trial.

His countryman Sergui Hontchar won the stage, grimacing as he pushed a massive gear. Popo looked super-smooth and controlled as he cruised into Trieste, and gave himself a massive chance of topping the podium in Milan next weekend. 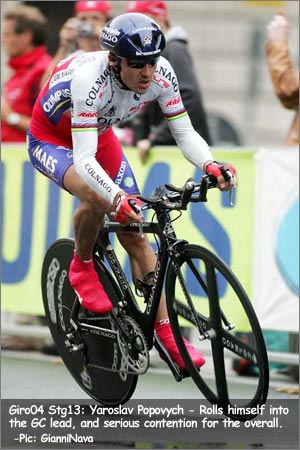 Popovych is a good climber and will fancy his chances of staying with Gilberto Simoni in the Dolomites. It was a stage which means a lot for the shape of the Giro, but also for the immediate future of cycling.

Popovych looked like he hadn’t even started his ride when he was getting interviewed by Italian TV’s glamorous presenter Alessandra Di Stefano after the stage. His facial expression seemed to suggest what we all know already. This is the guy who will take over Lance Armstrong’s mantle as the best stage racer in the world.

Brad McGee catapulted himself to a whole new level today. After 2 weeks of a major tour, the avowedly clean Aussie is showing he can ride the big races without dope and succeed – his powerful ride today leaves him just a minute off first overall.

Franco Pelizotti also had a good day, and improved his TT efforts hugely – he sits just 5 seconds behind Simoni overall.

The younger riders are just starting to shove the 30+ years old generation out of the limelight. Simoni and Garzelli finished on equal time today, over 2 Ѕ minutes down, but Garzelli looked knackered and Simoni didn’t look much better.

Garzelli blasted off fast and looked like he was on a mission, but he faded a bit and had to change bikes due to mechanical problems. 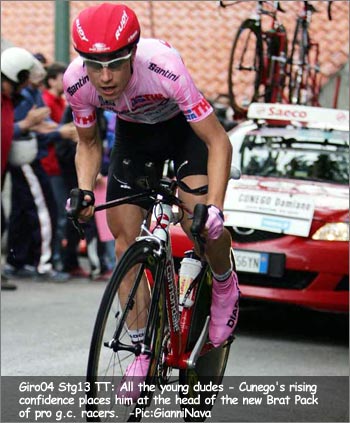 The Saeco ‘capitano’ did have a real tumble on a wet corner though, losing it big time and slewing along the tarmac. He had the cuts to prove it at the end, and a less than complete pair of shorts. He also failed to obey one of Scottish climbing greats Robert Millar’s golden rules for a big tour: “Always wear gloves – you will fall off at least once”.

If Simoni is even slightly affected by his crash, he’ll have a hell of a job to pull back a minute and a half on Popovych in the mountains. No matter that he’s the best climber; Popovych is just starting his reign at the age of 24. Garzelli has had to be rescued a couple of times already by Tonkov in the race, and a podium place or stage win looks like his best bet now.

One other thought about Saeco. Cunego is still only 21 seconds back on Simoni overall, and ambition makes the mind do funny things. Come the middle of next week, if you were in Cunego’s shoes and fancied a shot at the podium, would you be prepared to sacrifice that to help a team leader in the overall fight? Nope, me neither.

PEZ Socks It To Ya!