The DMT shoe company is scrambling to create the first open-toed Shoe for sprinters in case Alessandro finds his climbing legs and takes another before Milan. The Fassa B speedster continued to embarass the bunch sprinters again today as he chalked up win #8.

Stage 15 – May 24: Porec/Parenzo – San Vendemiano, 234 Km
One could write an instruction manual on how to win a freakish amount of stages in a Grand Tour: Get the world’s best sprinter, build a team of locomotive strength around him, fool other teams into thinking they have a shot in the sprint, then line up, speed past, dominate, and launch the leader to the line. Alessandro Petacchi won his 8th stage of this year’s Giro by employing those very tactics. It almost looked close for a few seconds, as the likes of Lotto-Domo and Gerolsteiner made inroads in the final few k’s, but all was for naught as Marco Velo slung his leader by the wannabes and to the line. Game, set, and match. 8 wins in 15 stages – it’s almost too hard to believe. 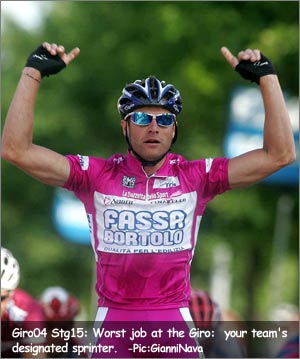 Here’s the stage report: Doomed breakaway of 4 basks in the television spotlight. Fassa goes to the front, obliterates the breakaway, and launches Petacchi to the line. What more do you need to know? There was a crash. Magnus Backstedt and Piotr Wadecki didn’t start. That’s it.

But, akin to the argument made about the Tour de France becoming so one dimensional with Armstrong’s dominance, are the same mutterings coming about at the Giro revolving around Ale – Jet? He’s the Michael Jordan, the Tiger Woods, the Michael Schumacher of the sprints. Simply untouchable. Even today, when his leadout train was infiltrated, he still got a clean line, and blew past everyone, followed by the hapless McEwen and Pollack – again. For how many years are we in for watching Aleesandro destroy everyone in the sprints? With Cipo all but retired, and the Zabels of the peloton past their zenith, what’s to come? Where will the next challenger to the throne come from?

Rider Comments Compiled by Michele Tomasi
Alessandro Petacchi (Fassa Bortolo): “Also this time I must say thanks to my incredible team mates. I was telling them to take it easy and not work but they didn’t care for that, as they wanted to work for me. In the sprint when Velo went, I thought it was better to wait, and I was right”.

Yaroslav Popovych (Landbouwkredit): “Tomorrow will start the hilly stages, and it will be the road to say who will win it. I hope to arrive with the leading group at the last climb, so if I would have a bad day, I could try to lose as little as possible. But if I feel fine, I will be closing all the attacks from Cunego and/or Simoni”.

Pro Shop: The Older the Violin, the Sweeter the Music