Pavel Tonkov (Vini Caldirola-Nobili Rubinetterie) powered himself to victory today over 153 Km of tumultuous roads between Brunico and Fondo Sarnonico; a dйjа vu victory for the 1996 Giro winner whose last win came, coincidentally, on the 17th stage of the 2002 Giro d’Italia.

A day after the second rest day plagued by Rambo-like raids of the rider’s hotels by the Italian police (they found nothing), the race set off for the final three days in the mountains before Sunday’s finish in Milan. Today’s race was animated early on with a flurry of attacks, which left Alessandro Bertolini (Alessio) and Oscar Pozzi (Tenax) off the front at around the 66 Km mark. 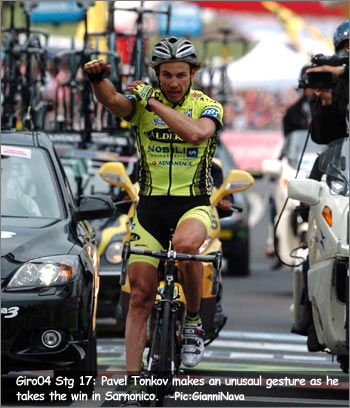 A group of eleven chasing riders soon formed, prompting an attack by Stefano Garzelli (Vini Caldirola-Nobili Rubinetterie) and at the seemingly same moment leaving the young Maglia Rosa, Daimiano Cunego (Saeco), in a spot of bother on the side of the road with mechanical problems. The youth of the Giro leader became evident for the first time, as he panicked on the side of the road despite the presence of a barrage of teammates. Nevertheless, Cunego was soon back on a new bike and rolling at the front, as Garzelli was quickly back in the group, undoubtedly a man with different form than a year ago.

Upon the capture of Garzelli, his teammate Pavel Tonkov launched from the peloton and began eating into a 1:30 lead by Bertolini and Pozzi. On the major climb of the day, the Mendola, Pozzi was dropped and Bertolini was joined by Tonkov. With about 20 Km to go, the power and experience of Tonkov came to light as a gentle acceleration left Bertolini behind to question his manhood.

The now thirty-five year-old Tonkov soloed in ahead of his breakaway companion for his first win in two years, as the previously flustered Cunego gave an angry Brad McGee (FD Jeux) (he was issued a 20 second penalty on Stage 16 for holding on to the team car) a go in the field sprint.

No major changes in the overall classification today, but this was just a dress rehearsal for tomorrow’s stage that takes the race over the Gavia Pass. If Cunego is able keep his head and legs in working order tomorrow (and make it through any possible blizzards) he’ll begin to taste final victory in Milan.

Rider Comments Compiled by Michele Tomasi
Pavel Tonkov (Vini Caldirola): “I made that gesture because no one believes in me anymore. Everybody was thinking that I was too old, and not good anymore, but I think I showed something good today. I came to this Giro to help Garzelli, and win my own stage. I just won a stage, so let’s help Garzelli in the last hilly stages, and hope to bring him on a podium place in Milan”.

Bradley McGee (Fdj.com): “I’m really upset with the organization of this Giro. I went to talk with them, and asked why I got those 20 seconds of penality. Then they replied that they didn’t know, that they just got a number… So I asked them if they knew who I am, and that I was going to leave this Giro if they were not going back on their steps. Now I’ll ask the UCI to get justice, because I’m not a lawyer!”

Alessandro Bertoletti (Alessio): “I tried many times to go away, because the stage was finishing here close to my home, and I wanted to make the race hard. Unluckily I found on my road a great Pavel, and…so just compliments to him. It’s since the start of Giro that I’m going well, and I was wishing to get a victory for me, but a second place is a good thing for me anyway”.

The French media are saying that the Italian teams involved with the “Nas visit” (yesterday’s drug raids) may get bumped from the Tour de France, like has happened to Kelme. So there’s a lot of confusion and worry for many DS at the moment. Corti (Saeco’s DS) called Leblanc after the stage, for know some more news directly from him, but he just said that they didn’t have anything to say now.

US Pro Champs Preview: The Exhibit!