The long awaited look at the 2005 corsa per il Giro d’Italia took place Saturday in Milan, and PEZ was there to soak up and observe Italian-style the pomp and circumstance. It’s looking like a great route – 3500km from May 7 – 29, taking in some Giro classics like the Stelvio pass and Sestriere. Here’s a closer look at the layout. 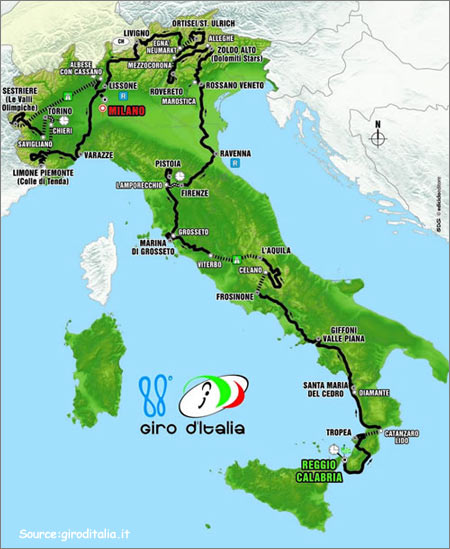 The Giro d’Italia Unveiled, Part I
Today we’ll do a little extended preview of the first Grand Tour of 2005: the 88th Giro D’Italia. The route was unveiled yesterday in typical Italian splendor with numerous heads of Italian cycling state present, namely three big contenders for next year’s overall win: Ivan Basso, Damiano Cunego, and Stefano Garzelli. With that said, these three riders will probably be lucky if all of their hoped for victories in next year’s Giro add up to even HALF of what another attendee’s probably will: Alessandro Petacchi. Petacchi, if he holds the form of last year, could possibly make a run at his own record of NINE victories in one Giro.

Let’s give the stage pillager his due… Petacchi commented on the possibility of ten victories: “They tell me that there are 10 stages for the sprinters. It appears I’m not allowed any mistakes [if I want to get TEN].”

The official presentation of the Giro has been repeatedly set back since November, because Italian TV could not find a time slot to fit it in. So, finally on the 21st of November, three months before the race is due to begin in Reggio Calabria with a 1.150 km prologue, the route was presented.

The Giro begins on May 7th with the aforementioned ultra-short Prologue in the super southernmost tip of Italia and ends 22 days later on the 29th of May in Milano after 20 stages and nearly 3500 kilometres.

The Giro Unveiled, Part II
Of the 3500 km, 72.5 of them will be time trialled – the first TT is on stage 8 (May 15) from Andrea Tafi’s hometown of Lamporecchio to Firenze over 41.5 km. The next TT from Chieri to Turin comes three days before the end and measures 31 km.

The climbers have much reason to rejoice, as there will be five stages in the high mountains (both the Dolomiti and Alps), with three mountaintop finishes – nothing even remotely comparable to the climber’s delight – the Vuelta a Espana (ELEVEN mountain stages in 2004) – but still enough to satiate that appetite for uphill madness. As per the norm these days, most of the uphill kilometres will fall in the last week as well.

Fret not ye speed freaks, as mentioned previously, the sprinters (should we say, sprinteR?) also receive their due, especially during the first week. 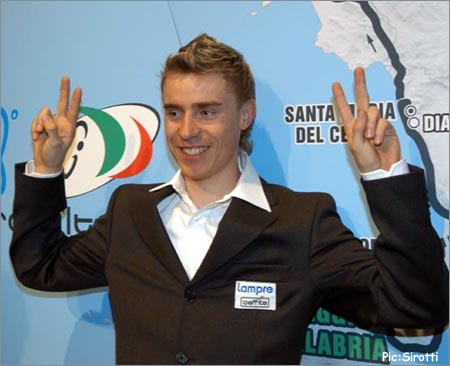 The Giro Unveiled, Part III
Damiano Cunego, the 23 year old defending champion, appeared pleased with the parcours: “I like it and want to win it again but it won’t be easy because I’ll have a lot of strong rivals…I need to study the stages in detail to predict how the race will go but the mountains, and especially the mountain stage to Sestriere, will be decisive.”

Cunego’s biggest rival will most certainly be an ever-improving Ivan Basso, one of the only people to have shown himself to be, for the most part, a match for Lance Armstrong in the mountains. Basso appears confident in his chances: “I haven’t ridden the Giro for five years but I’ve done well at the Tour and hope I can be even stronger in the Giro…I’m going to have a busy summer, but I’m aiming to win the Giro first and then I’ll think about the Tour de France.” A Giro-Tour double would be quite the impressive breakthrough…

The Giro Unveiled, Part IV
The Giro D’Italia is also shaping up to be a proving ground for 2006 Winter Olympics site, Turin. The 18th and 19th stages of the Giro, two of the most crucial, will be staged in and around Turin, where the town, despite being repeatedly ravaged by criticism over the very slow progress in preparation for the Games, hopes to show that it can accomodate a huge event. The 18th stage will be the 31 km TT which will finish in Turin. The 19th stage will finish at the ski resort of Sestriere, which will host much of the Games’ skiing events.

The Giro will also be host to the very first Grand Tour under the auspices of the ProTour. The Giro, as well as the Vuelta, stand ready to be two of the biggest winners of the ProTour. The requirements of the ProTour, along with the larger teams, will make the field unquestionably stronger than in year’s past. Two wild card teams will be selected on March 31st, and for the teams on the cusp (Mr. Bookmaker, Phonak, AG2R), this is an incredibly important selection.

The Giro Unveiled, Part V- The Mountains
The real fun in the 2005 Giro does not start until midway through the second week. When the mountains come though, they come with a mighty vengeance. 2005 will see the return of the Passo dello Stelvio, one of the most revered climbs in cycling, also one of the highest paved roads in Europe, if not THE highest (if I remember correctly).

Stay tuned this week as we plug our faves and raves for stages, protagonisti, and anything else we can think of, with former Giro rider Alessandro Pozzi.

GIRO ’05: Inside The Presentation