The first Rest Day of the 2005 Giro d’Italia comes after 10 days of incredible racing. PEZ takes a moment to look back over a prologue, 8 road stages, and a time trial as part of the northward trek from Reggio Calabria to Ravenna, and preps you for the coming ardors that await the contenders in the second phase of the 2005 Giro en route to the finish in Milano.

Prologue: Reggio Calabria, 1.15 km
The 2005 Giro d’Italia Prologue was one of the shortest stages in Grand Tour history. The 1.15 km course was predicted to suit the fast finishers as well as the trackies. Brett Lancaster lived up to predictions and used his background as trackie and notable part of the World Record setting Australian team pursuit squad to roll to the first Maglia Rosa of this year’s Giro with a time of 1:20.958. The entire field was more or less within 20 seconds of Lancaster, so his time in Pink appeared to be numbered… 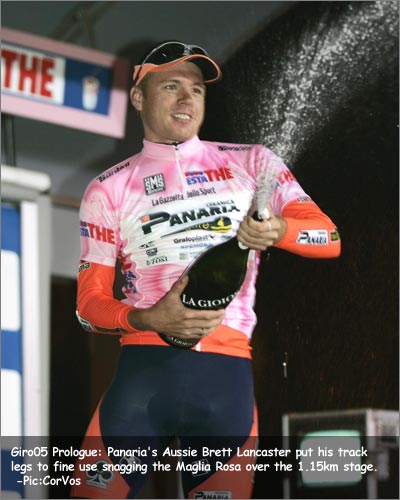 Stage 1: Reggio Calabria-Tropea, 208 km
Paolo Bettini spoiled the sprinters’ party with an attack on the final climb to the finish. His acceleration could not be matched and he enjoyed a three second margin of victory as he rolled across the line – his first stage win at the Giro also was rewarded with his first ever Maglia Rosa. Robbie McEwen took the sprint for second ahead of the Ale-Jet – a hint of what was to come. 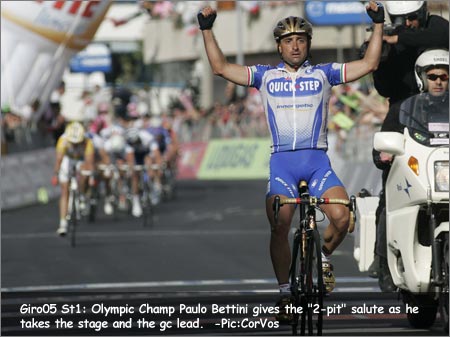 Stage 2: Catanzaro Lido-Santa Maria del Cedro, 182 km
After being denied the win in Tropea because of Bettini’s sterling attack, Robbie McEwen came good in Stage 2 – taking both the stage and Maglia Rosa. McEwen jumped on Jaan Kirsipuu’s wheel and used Kirsipuu’s sprint as the perfect leadout till 100 meters to go, when McEwen jumped and emerged from the chaos, the winner.

Petacchi’s leadout train was derailed in the closing meters. Peta was very unhappy with the events of the sprint, and voiced ridiculous concerns of sabotage and cohesion among the other teams. Were these the words of a threatened deity? 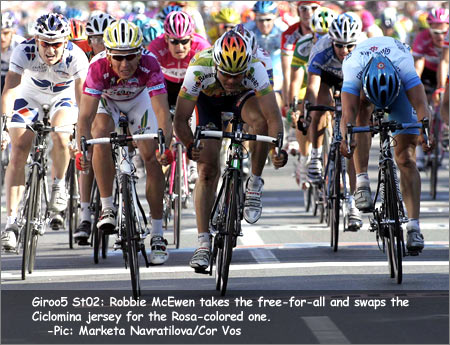 Stage 3: Diamante-Giffon Valle Piana, 205 km
Danilo Di Luca continued his impressive season with a victory in a select group sprint after a tough 6 km climb that came less than 10 km to the finish. 50 riders came into Giffoni Valle Piana with a minute gap on the Gruppo Maglia Rosa. None of the big name sprinters made the selection, so the sprint would be decided between the select group sprinters: the likes of Cunego, Bettini, Di Luca, Garzelli, and Celestino. Cunego gave Di Luca a run for his money, but it was the ProTour leader, Di Luca that got the victory and edged ever so close to the Maglia Rosa.

The leader’s jersey swapped shoulders for the fourth time in four days, but this time, back to Paolo Bettini, who was 6th on the day. 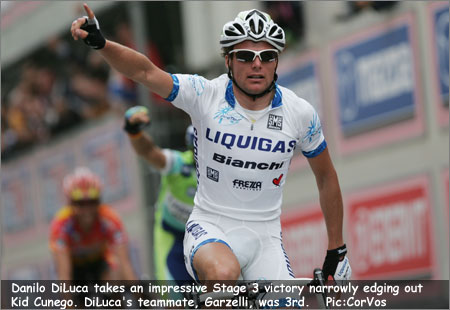 Stage 4: Giffo valle Piana-Frosinone, 211 km
Paolo Bettini, erm, uh, Luca Mazzanti took the fourth stage in a stage finish that will be talked about for years to come. In the finishing straight it was Bettini who apparently took Baden Cooke into the barriers with about 100 meters to go. Paolo Bettini came across the line first, but was relegated, thus giving the honors for the stage victory to Luca Mazzanti.

In a chaotic final few kilometers, a small group had separated themselves from a disorganized, but once again select group of 50. Going into the finishing straight it was – Luca Mazzanti, Dario Cioni, Michele Scarponi, Paolo Bettini, and Mirko Celestino. Bettini started his sprint from a ways out, and with about 150 meters to go, Cooke tried to come underneath Bettini, and Bettini shut the door, taking the fast finisher down. Bettini came across the line with a comfortable margin of victory – sort of. Bettini was relegated shortly thereafter, and Mazzanti declared the winner.

Everyone seems to have an opinion on the sprint, so why not PEZ? The wreck was avoidable. As a sprinter, and a very fast one at that, Cooke should have known better than to try and come on Bettini’s inside. Cooke would have done the same thing in Bettini’s shoes. That doesn’t make Bettini’s move correct, but Cooke had a LOT of road on the other side – it was in the wind, sure, but we’re talking about a former Green Jersey winner here, it probably would not have made the least bit of difference if Cooke would have gone right – he would have dusted Bettini with nary a problem. There’s still that matter of Cooke going down though, which thus makes it hard to side with Bettini…

Bettini was relegated, but he did keep his overall lead, and thus earned another day in the Maglia Rosa. 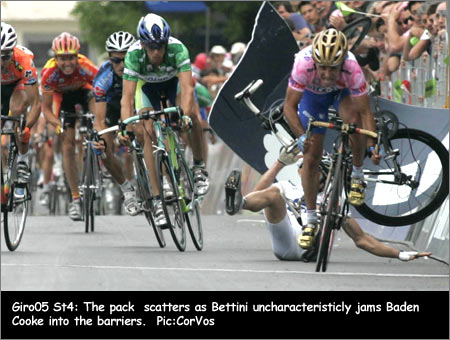 Dirty sprint or gamesmanship? Depends on who you ask.

Stage 5: Celano-L’Aquila, 223 km
Paolo Bettini was evidently not content to sit in the field and enjoy another day in Pink, or maybe he didn’t want to discuss his sprinting tactics from the day before – whatever the reason, Bettini got himself into the day long break and drove it, and drove it, and drove it. Di Luca’s Liquigas/Bianchi team pulled the break back in the closing kilometers and allowed Di Luca to do his thing in the finish – which he did with admirable efficiency, taking not only the stage but wresting the Pink Tunic from a visibly distraught Bettini as well. 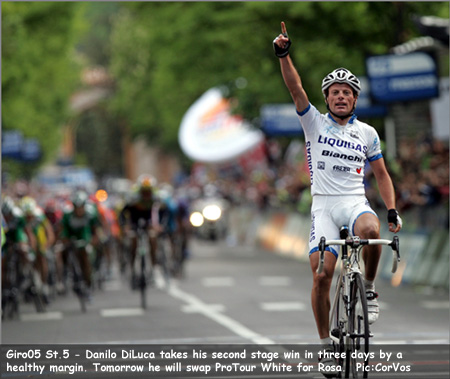 That’s two for those keeping count at home.

Stage 6: Viterbo-Marina Di Grosseto, 153 km
Finally, after what seemed like a constant stream of selective finishes, it was once again a sprint royale on Stage 6. The Fassa Train looked to be rolling full steam, but with 3 km to go, one of Petacchi’s leadout boys, Matteo Tosatto, crashed through a corner, and took his teammate and stage hopeful, Alessandro Petacchi with him. Robbie McEwen’s Davitamon/Lotto took control after that, and in a clever tactical move, McEwen sent off his teammate, Henk Vogels, for a late attack. McEwen was then able to sit in and allow the other teams to chase – McEwen was then given the armchair escort and dusted the other pretenders in the sprint – much to the joy of Vogels, who was still 5th after coming OH so close.

The feisty little Bettini took some time at an Intergiro sprint and put himself BACK into the Maglia Rosa, but by a mere three seconds. 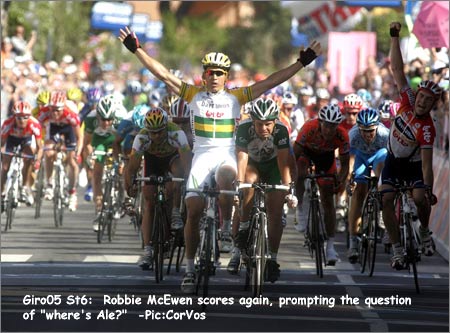 Stage 7: Grosseto-Pistoia, 211 km
The seventh stage was the first stage of this year’s Giro where there was some kind of real selection among the overall hopefuls. Koldo Gil proved that though long breakaways are often futile, fortune favors the brave. Gil was in front of the race for 180 of the 211 km and managed to hold off a hard charging group of about 15 by 20 seconds.

The climb of Salita di Sammomme with only 15 km to go shattered the field and left a few of the favorites behind – namely Basso, Garzelli, Scarponi, and Maglia Rosa Paolo Bettini. Garzelli, Basso, and Scarponi lost very little time, but some were already concerned of Basso’s chances. Basso was dismissive about being dropped on the climb, stating that it was merely the result of cramping, nothing form related.

Cunego led the group home for second, finally taking Di Luca in a sprint. Di Luca rode himself back into the Maglia Rosa though – as the three seconds he started in arrears of Bettini were more than made up for by the 1:36 that Bettini lost. 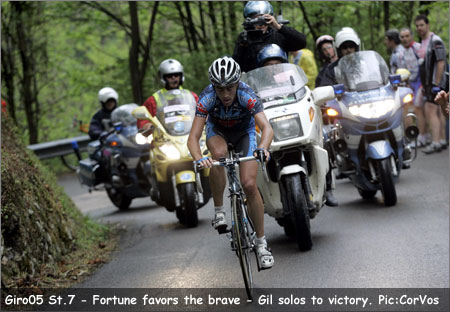 Stage 8: Lamporecchio-Firenze TT, 45 km
After a rather tough Stage 7, it was time for the first real test in this year’s Giro – the 45 km ITT from Lamporecchio to Firenze. American, David Zabriskie of CSC rode a spectacular TT to take the win – his teammate Ivan Basso followed close behind in second to give CSC an impressive 1-2 on the day.

Basso more than made up for the 30 or so seconds he lost the day before, and almost took the Maglia Rosa off of Di Luca’s shoulders. Di Luca rode an amazing time trial to only lose 1:18 to Basso and conserved his lead by a mere 9 seconds – once again proving that the leader’s jersey can make a rider capable of things would not normally be possible. Paolo Savoldelli quietly delivered another impressive performance and rode himself into 3rd overall on GC. Cunego, Garzelli, and Simoni rode admirably, but lost some time, nothing hugely significant, but 1-2 minutes behind Basso could spell trouble for their hopes of overall victory. 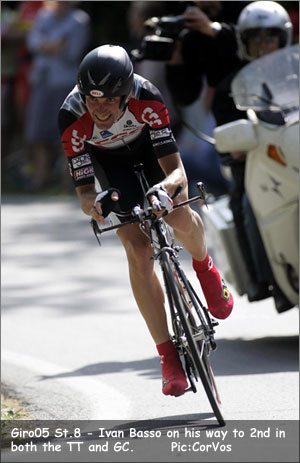 Stage 9: Firenze-Ravenna, 140 km
Order was restored on Stage 9, as Alessandro Petacchi silenced his critics and jumped to a bike length victory. The Fassa Train delivered Petacchi in traditional fashion, and as per the norm when delivered correctly, Petacchi put on his dancin shoes and tap, tap, tapped to a very comfortable victory. 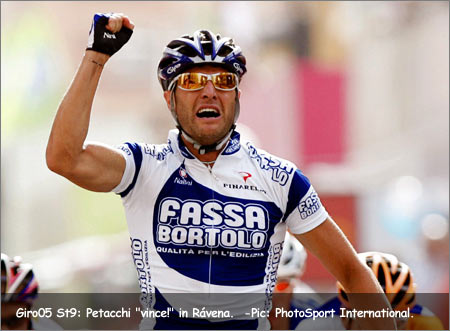 The Scorecard
After 9 stages, here is the overall GC:

On The Menu
The Giro is about to get medieval. The early formalities have been taken care of, and now it’s mountains and more mountains on the menu. The rest of this week will more than likely put the Giro title within the reach of only a small handful of riders.

After an easy, but long stage that should end in a big time bunch sprint the race heads into the Dolomiti on Thursday. Stage 11 will include four classified climbs, including the mountaintop finish to Zoldo Alto. Stage 12 will more or less be a transfer stage to the next big mountain stage. If the sprinters can make it over the big climb of the Passo di San Pellegrino at the beginning of the stage, there could well be a bunch kick in Rovereto. Saturday’s Stage 13 will feature 6 classified climbs in the heart of the Dolomiti – Costalunga (1745 m), Sella (2244 m), Gardena (2121 m), Erbe (2004 m), Eores (1863 m), and then the final finishing climb to Ortisei/St. Ulrich. Sunday will cap off a ridiculous hard second half of the week with a crossing of the Cima Coppi – Passo dello Stelvio, followed by the climb of the Foscagno before the finish in the winter sport haven of Livigno.

Pacing: Flat Out or Even Steven?