In the last real ‘sprinter’s stage’ before the Giro hits the mountains, an opportunistic Robbie McEwen hijacked Petacchi’s Fassa train to out sprint the specialist. It came right down to the line, but how did the race unravel?

Well, with 212 km on the cards and some big gradients to look forward to in the coming days, the peloton was content to roll along at a sedate 32 km/hr for the first 100 km of the race. Surprisingly there were no suicide breaks, animals or hooligans in the pack. I suppose many may have been discussing the recent announcement that Mario Cippolini has split from his wife. Other than that, nothing of note occurred save a puncture and bike change from Liquigas’ Danilo DiLuca but he soon rejoined the guys after his team mates paced him back. 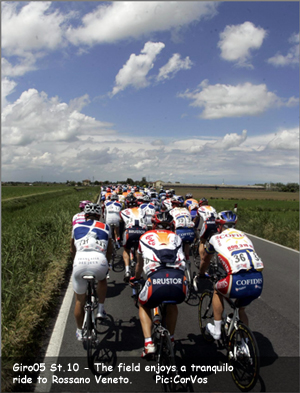 Shortly after DiLuca’s mishap, Raffaele Illiano of Selle Italia launched an attack, quickly gaining time on the dawdling peloton. At the next feed zone the long haired, tattoo decorated rider had increased his advantage to 1’42”. After over 100 km devoid of any action, Illiano entertained the viewing public with his ham sandwich eating antics and thrilled the crowds by removing a single rain cover from his shoes leaving one remaining in a street style statement.

However, the escape was not to last for too long as after 73 km alone in front, the Italian was absorbed back into the peloton just in time for the finishing circuit. At this point, Cofidis took it upon themselves to control the pace of the bunch but all the drama was saved for the closing kilometres as the French team took a wrong turn at a roundabout sending a small group briefly off course. The riders chased and resumed their position at the head of the pack but Ivan Basso suffered an untimely puncture resulting in a CSC TTT display off the back with only 20 km remaining. 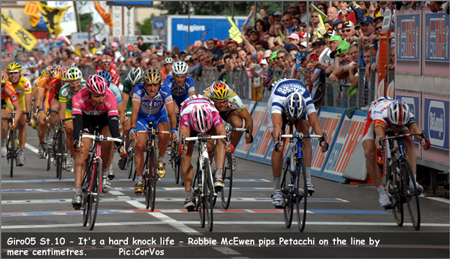 The 3 laps of the finishing circuit formed the last 15 km of the stage and also included a dangerous hairpin turn amply fulfilling the organiser’s fondness for dangerous finishes. The big guns of the sprinters team’s took control of the race at this point, all vying for pole position at the front of the peloton. T-mobile and Fassa were most visible but FDJeux and Davitamon also sat near to the front as the pace reached breakneck speeds in the closing kilometres. Under the red kite Fassa Bortolo had the pack by the scruff of the neck giving Alessandro Petacchi an awesome lead out. Unfortunately for him, the Italian faltered in the last remaining metres leaving the door open for Robbie McEwen to kick through and take the tenth stage just centimetres ahead of Petacchi.

At the halfway point in the first Grand Tour of the season we are about to enter the high mountains. Danilo DiLuca holds the pink jersey but with all the GC contenders still in contention the race is wide open. Within the next few days the real riders to watch should make their intentions known and there should be some significant changes in the classification. 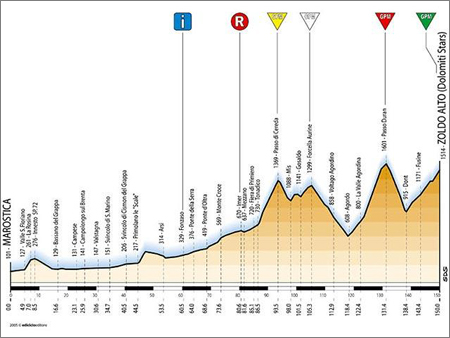 Tomorrow’s mountaintop finish at Zoldo Alto should provide the powder for some serious fireworks.

Robbie McEwen (Davitamon-Lotto):
“I’m very happy for the team. Gates, Vogels, Vierhouten, and Brandt were always at the head of affairs during the final circuit doing a great job of keeping me protected and at the front. I just managed to stay behind Fassa’s train, and at 150 metres to go I gave everything I had. I won on the finish line!”

Alessandro Petacchi (Fassa Bortolo):
“There’s not much to say. It was my fault. The team did an incredible job, and I just made a mistake. I thought that McEwen was going to try to surprise me by sprinting earlier but…I was wrong. I tried to hold him in the final metres, but he was just too fast. I got beaten by a great rider.”

Fabio Baldato (Fassa Bortolo):
“I guess this was the last chance before the mountains, and now McEwen is going to leave…he gave it everything he had for [the win].”

Danilo Di Luca (Liquigas-Bianchi):
“This is my 5th day in Pink and I’m very happy. Tomorrow I will find out what I can truly do in this Giro, as it will be an important stage. Armstrong said that I’m the true surprise of this Giro? Well, that definitely makes me happy, and it makes me happier to hear that he thinks I can arrive on the podium in Milano. I think it will be hard, but if I have this condition in the last week, it won’t be impossible”.

Lance Armstrong visited the Giro today for a quick visit with his Discovery Channel team. He said he was impressed with Savoldelli’s performance so far, continuing the praise saying that he’s very motivated and could do well. He had nothing but good things to say about this year’s Giro – he follows it everyday and believes that it’s really more interesting than other years, which he suspects is a result of the ProTour. When asked about the budding rivalry between Damiano Cunego and Ivan Basso, he explained that he doesn’t know Cunego too well, but was betting on Basso anyway.