Giro Stage 15: How To Make A Petacchi Pie

Rain, Wind and 50km lopped off the race distance seemed to be the perfect recipe for a Petacchi pie as the Italian super sprinter made it a ‘hat-trick’ with three victories in this years edition of the Giro d’Italia.

Bad weather in the start town of Livigno led the organisers to take pity on the bunch and shorten the stage from the original 205km to 154. Today’s run was definitely one for the sprinters, but that didn’t stop the GC big hitters from making their voices heard. In an interview with Italian sponsor and sports paper la Gazzetta della Sport Paolo Savoldelli was asked to compare himself with the team’s leader Lance Armstrong. He said “There’s no comparisons to make. The truth is that Armstrong is a special champion, I am only a good rider.” Meanwhile, the former protagonist for the final classification Ivan Basso who so spectacularly blew was rumoured to have a stomach bug caused by bad scrambled eggs in his hotel. Ouch. 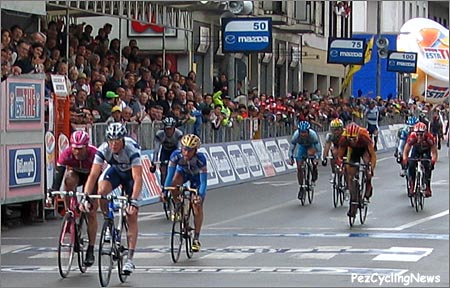 The finish action, amazingly caught on film by the Pez himself.

As usual, one brave soul decided to press on alone in today’s stage and the protagonist was Roy Sentjens of Rabobank attacking after only 12km and staying away until 28km to go. The Dutchman built a maximum lead of 2’45” and was briefly joined by Selle Italia’s Raffaele Illiano – who also tried a solo escape last week. Illiano’s hard pace setting finally cracked the Dutchman with only 30km to go, after which he was quickly caught. Eventually, Illiano himself was caught with 20km remaining after the Discovery, Lampre and Fassa teams began to drive the pace before the finishing circuit. 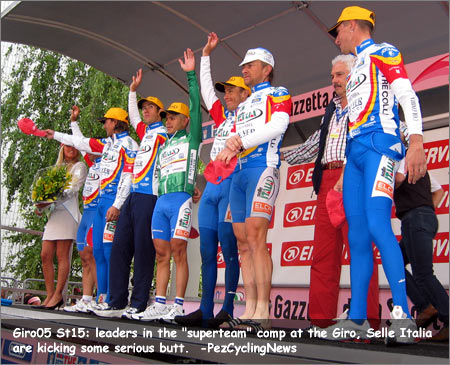 In the wet conditions, it made sense for the race leader to stay out of trouble and indeed Paolo sat in about fourth spot for much of the time. Discovery set the pace, stringing out the bunch whilst Fassa Bortolo were content to wait for their chance behind the blue train. Despite a brave attack from Francais de Jeux’s Matt Wilson, followed by his team mate Lilian Jegou after he was caught, the final lap of the circuit was textbook. Fassa took over the lead but T-Mobile made an effort to break up the Italian team’s grip on the final kilometres and the two teams prepared to launch their respective riders – Petacchi for Fassa and Zabel for T-Mobile.

Fassa regained control in time to pass under the red kite first as Petacchi wound up his now famous finishing sprint. In the final metres Alessandro took the win with a comfortable buffer ahead of Bettini and Zabel, netting his third victory in the race. 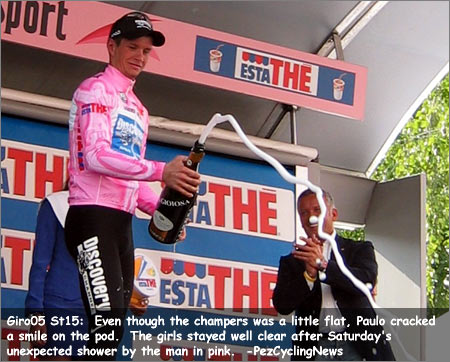 Tomorrow brings a welcome rest for the road weary competitors before heading back to the grindstone on Wednesday for the 16th stage along the Ligurian coastline from Lissone to Varezze.

Alessandro Petacchi (Fassa Bortolo):
“Today the train worked very well again. It’s possible to make mistakes, but then it’s normal that there are some doubts after those mistakes. Today it was easy to crash, because of the weather conditions. Everything went fine, compliments to my teammates.”

Paolo Savoldelli (Discovery Channel):
“In these weeks we [the contenders for Pink Jersey] arrived often on the finishing climbs together. For the moment I think that I am on the same level as the others, as there haven’t been any big differences. I did very well up until now, but it anything can happen. I still think that I’m not the favourite for this Giro.”

Ivan Basso (CSC):
“I’m feeling better and the stage helped me. Now there’s a rest day and then the day after will be an important day. If I feel ok, I will try to do something good on the weekend.”

An Italian newspaper reported that Ivan Basso felt bad because he had some bad eggs, but when Bjarne Riis was aked to confirm this, he said that it’s not true. They still don’t know the cause of Basso’s illness. A blood test was performed, and the results will be known tomorrow. Tomorrow CSC and Basso will decide whether to go on or not.

Giro Stg 14: Parra Takes His Second In A Row!