After yesterday’s hard stage and before the next two very big mountain stages, it was a day of rest for most of the peloton, not much action for the overall, but yet again another day for the sprinters.

Today’s stage 12 from Alleghe to Rovereto is 178 kilometers with a small climb of the Passo di San Pellegrino. The Swiss rider Philippe Schnyder of the Colombia-Selle Italia team went on a lone break and averaged around 2 minutes 30 second lead for quite a fair length of time, but it was a suicide mission from the start. 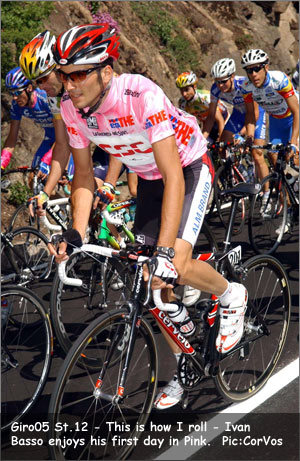 With 40 kilometers to the finish and nearly 4 hours of racing, Schnyder had 1 minute 13 seconds advantage and the bunch seemed to be taking their time pulling him back, mostly Fassa Bortolo for Alessandro Petacchi.

The eventual happened and Schnyder was pulled back, then it was up to the Silver Train to take Petacchi to the line for an easy win by a length from all the usual suspects. Isaac Galvez looked good again, but didn’t have it, only Paride Grillo of Panaria gave Alessandro any problem, and that was a very minor one. The overall remains the same going into tomorrow’s monster of a stage. 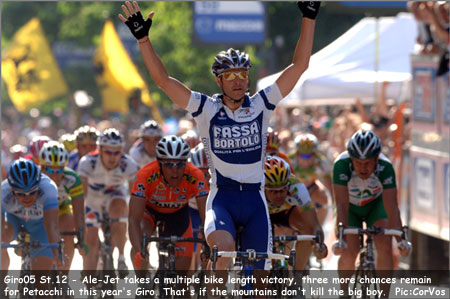 Alessandro Petacchi (Fassa Bortolo):
“I saw that I didn’t have anybody behind me, so I think I won well. I followed the long sprint of Grillo, who did a nice sprint. Today was a bad day for me, as I was in a lot of pain. I still haven’t recovered from yesterday’s stage. It hasn’t been so easy. We also showed today that we have a good train.”

Robbie McEwen (Davitamon-Lotto):
“It’s a pity to leave [note: both McEwen and Stuart O’Grady will not be starting tomorrow’s stage.] with the Ciclamino Jersey on the shoulders. But by doing the Tour and World Championships…it’s too much!”

Ivan Basso (CSC):
“It will be a weekend with 2 very difficult stages, but I know that I have to be very attentive everyday. I won’t take any stage for granted, but then it depends on what happens during each stage. Anyway, I’m feeling fine and this is important”.

Preview Of Stage 13
If yesterday’s 11th stage was considered a tough one, then Saturday’s 13th will put it to shame. The 13th stage of this year’s Giro definitely will carry the moniker of terrible, and for whomever is found lacking across the six GPM’s, the trite commentary of: unlucky number 13, will be applicable. The stage climbs east out of the Adige valley into the very heart of the Dolomiti. 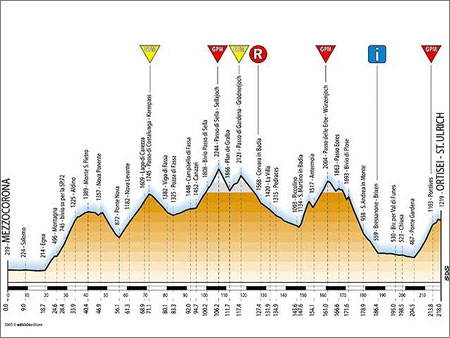 Don’t cut yourself on that profile

The first GPM comes after 71 km – the Passo di Costalunga (1745 m), afterwards the hits just keep on coming: next follows one of the most famous climbs in all of cycling, the Passo di Sella (2244 m), take a deep breath and move onwards to the Passo di Gardena (2121 m) – the Gardena comes at the HALFWAY point of the stage. After the Gardena, there is a nice, long descent to the penultimate climb of the day: the Passo delle Erbe (2004 m), followed in rapid succession by the, in comparison, tiny climb of the Passo Eores (1863 m). 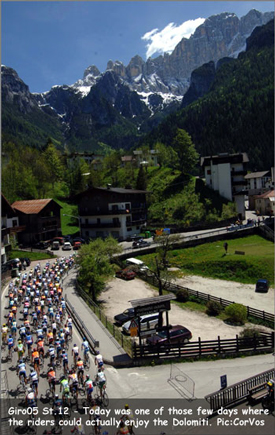 The riders will get a whole lot of this tomorrow

There will be a good bit of time to recover after the Eores – approximately 30 km. It should be expected then that a rather decent sized group (think: 30) will hit the Ponte Gardena for the final climb to Ortisei/St. Ulrich. This climb is by no means wicked, but it will be more than enough to beat the hell out of all but a select few with the pain stick.

The stage seems tailor made for a solid breakaway – something for the riders who are now no longer in contention for the overall, but still worthy mountain men, a la Stefano Garzelli, Damiano Cunego, Vladimir Karpets, miniscule Jose Rujano, or perhaps Signor Bettini. It all depends on what kind of stranglehold CSC puts on the race – will it be a deathgrip, or just a nice, firm full nelson?

Thankfully, instead of huddling over our collective computers watching grainy feeds direct from Italia – we can sit back, put the feet up, and watch coverage of the stage on OLN.

Zipp Bars & Stem: Open A Can of Whoopass!