Giro Stage 13 was the second real mountain stage, running 218 km between Mezzocorona and Ortisei. Things got really shook up today, with Basso faltering and Savoldelli showing his stuff, and I bit off most of my fingernails with all the tension! 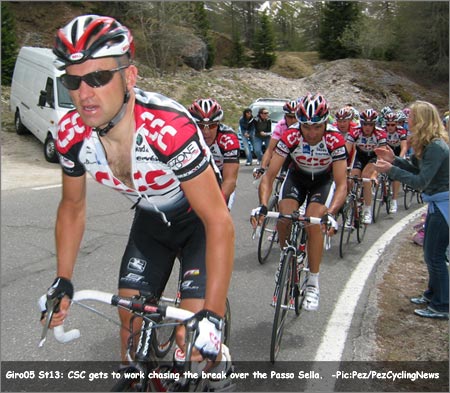 A few early attempts at a breakaway were made, but nothing stuck until a huge group of about 20 took off around kilometer 30. Notables in this group included Paolo Bettini and Jose Rujano in his green GPM jersey. At the start of the Passo di Sella they had eight and a half minutes on Basso, but this was to start falling. At the Passo Erbe, the lead was down to seven as Bettini had trouble keeping up with the lead group. 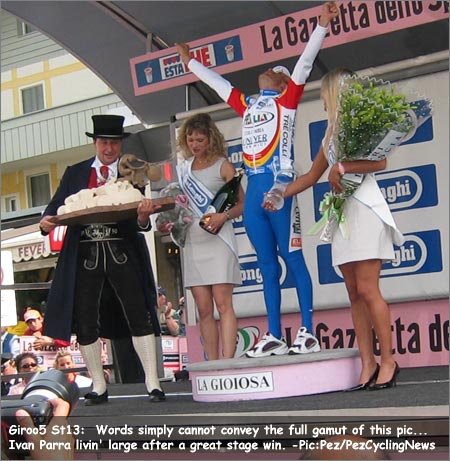 As the peloton, including Basso and seven teammates climbed, Lampre decided to try and make a move. Cunego and Simoni attacked and got about a minute ahead of Basso, yet they never caught the lead group. With 1.5 km left to the summit, Basso’s group, led by Zabrieskie and Schleck, retook the Lampre duo. As the lead group crossed the summit, it was Saunier Duval’s Garate who took the points followed by Rujano who was still very safely leading the GPM competition.

At the beginning of the descent Basso’s group, which also contained Savoldelli and Di Luca, was about 5 minutes behind the leaders. Bettini’s group was still sitting between the two. As they approached the last climb of the day, one had to wonder if Basso would be attacking, or simply keeping his close competitors in check. 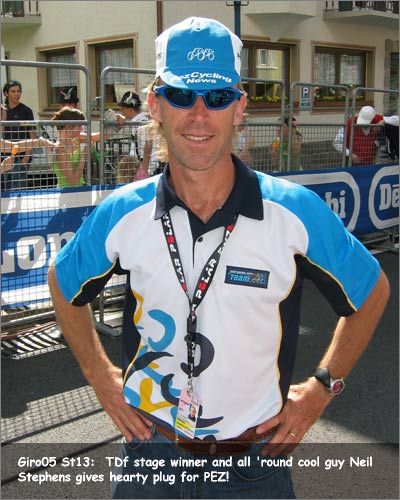 There was an Intergiro point at the bottom of the descent, which we have to assume was Bettini’s goal, but his group never made it up to the leaders, so he didn’t get those points. But with McEwen out of the race, Bettini still looked like a strong competitor for the Intergiro overall. Knowing this, he finally stopped pushing so hard and was reabsorbed by charging CSC train. Zabrieskie and Schleck took the peloton through a beautiful river valley at a blistering pace, stringing the riders out. As Basso’s group hit the base of the final climb, they had reduced the lead of Rujano’s group a bit more on the flats, and stood at 3 :14.

As the lead breakaway started up the hill, the stage win was on their minds. The first attack came from Credit Agricole’s Cuacchioli. He didn’t get far. Moments later Rujano took a shot, and he too was retaken. Then, Rujano’s teammate Ivan Parra gave it a shot and he actually opened up a gap. Pretty soon he had about a dozen seconds. These combined attacks tore the lead group up, leaving only 3 riders chasing; Garate, Rujano, and Cuacchioli. Garate did a good deal of work to bring Parra back, and slowly started making progress. 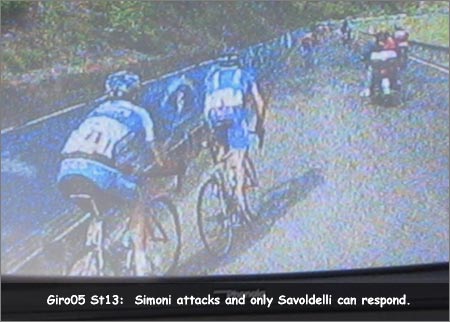 Back in the peloton, Schleck was still leading the group. Basso was sitting in second, and all the other contenders were there as well. Eventually Schleck was toast, and dropped off after his hard day of work. Still no attacks, but everyone knew the last few kilometers of the climb were the hardest. Finally, the first attack came from Euskatel’s Samuel Sanchez. Then Simoni went, followed by Savoldelli. Incredibly, Basso didn’t follow! Cunego stayed stuck to Basso’s wheel. Then, basically the entire rest of the peloton went to follow Simoni, except for Basso! Moments later, Savoldelli attacked a bit, and put a gap into Simoni while Cunego decided to leave Basso behind! 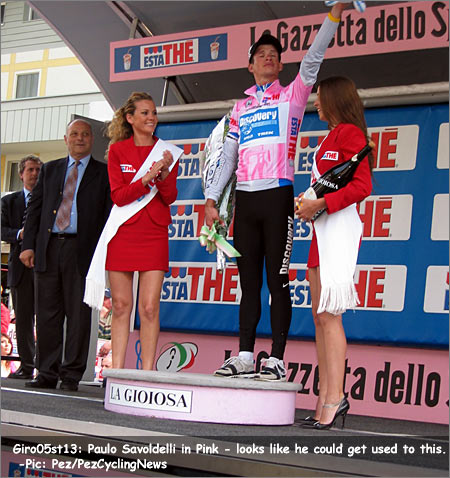 Danilo Di Luca really was showing his stuff around this time, catching up to Simoni. Basso was still fighting a bit behind them, and Parra was still leading the whole parade. Savoldelli started catching folks who had been dropped by Rujano’s group earlier. Savoldelli was definitely going to jump ahead of Basso in the G.C., but would he hold off Simoni and Di Luca to take pink for the night?

Parra was still alone with 1 km to go, and he knew he had it. Crossing the line, he pulled a photo from his the thigh of his bibs and kissed it, then held it up for the crowd to see. Garate came in second about 20 seconds back, nicking Rujano at the line. What a great ride by Selle-Italia today! Savoldelli took 9th, an inspiring ride by the former Giro winner. Basso finally came in 5:07 later, losing his leader’s jersey, but doing well enough to keep second. Folks, this Giro is still anybody’s game! 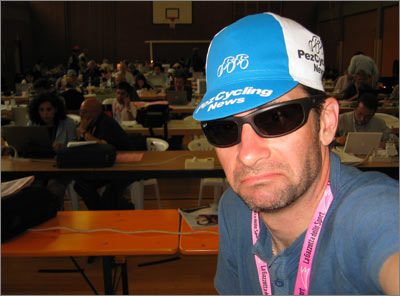 PEZ Checks In: Here I am deep inside the Giro press room after stage 13. It’s 7:33 local time, and the room is full of the international press tapping out their stories – these guys are serious – so I’m doing my best to fit the part. I’ve still got 1-2 hours before I find my hotel and grab dinner – but when the adventure is this good, and there’s another fine grappa to cap the day – no one’s complaining. Tomorrow I go even deeper inside at the stage 14 start. Ciao a domani – Pez.

Zipp Bars & Stem: Open A Can of Whoopass!