Rejoice! Normal service appears to have been resumed in the Basso digestive system, allowing CSC’s leader to get back on the road at full speed. Things are now looking distinctly prettier for cycling’s most debonair man.

Today’s stage offered a shakedown on the overall classification as the riders headed up again. On paper, it didn’t look like the stage would create so many problems, but riders were in trouble pretty much from the flag.

In fact, only 34 of the 156 finishers today saw the finish line inside of 10 minutes after Ivan Basso took his maiden Giro stage win. Way out of the overall after his crisis on the Stelvio stage, Basso showed just what he can do when he’s even 75% fit. By the end, Savoldelli had had his wings clipped a little by Simoni, and Di Luca had finally found the road a little stickier. 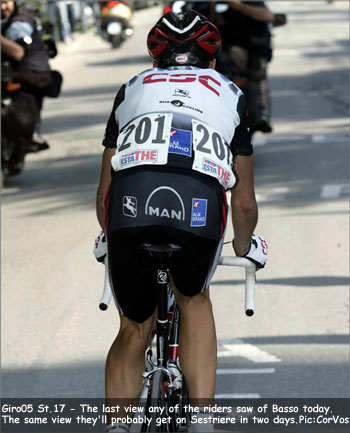 Witnessing the amazing Basso today, one has to wonder: what could have been? There’s always next year for Basso, and the Tour is only six weeks away.

There was the usual flurry of attacks, with practically all teams represented at some point – nice to see them adhering to a policy of inclusiveness! Eventually, things kicked off on the Colletto del Moro, about 30 clicks from home. As the leading group including Laiseka and Vasseur were caught on it’s steep slopes, the good work done by Michael Blaudzun started to pay off for CSC.

His chase had pulled Basso and all the other big names back into contention, and half a dozen riders escaped prior to the final ascent of the day – the Colle di Tendo. Along with Basso were his team mate Shleck and Euskaltel’s Samuel Sanchez, putting in a late appearance. If I hadn’t read the start list, I’d have been hard pushed to tell you this morning whether he was even racing the Giro. 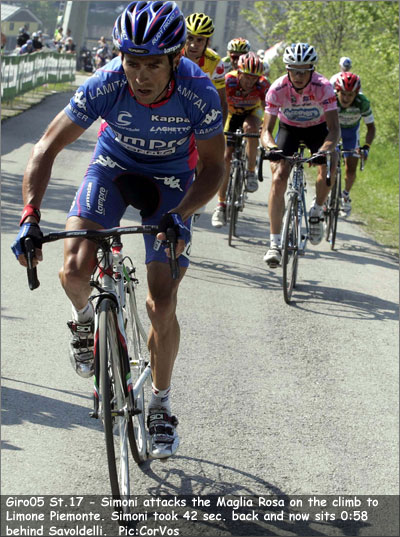 Simoni will definitely lose time to Savoldelli in tomorrow’s TT, but can he pull off something special on the Giro’s penultimate stage, which climbs Sestriere twice, as well as the ridiculous Finestre?

Schleck hammered up to the lower slopes, and by the time they were flying through Limone Piemonte, he’d pulled out 90 seconds on the ‘chasers’. There wasn’t an all-out effort behind, as Cunego was riding tempo before launching Simoni’s attack on the maglia rosa, Paolo Savoldelli.

Basso motored away with 6kms to go, at practically the same time that Simoni was putting ‘Il Falco’ in difficulty further down the climb. Interestingly, even though Simoni got clear, he wasn’t going nearly as quickly as Basso. 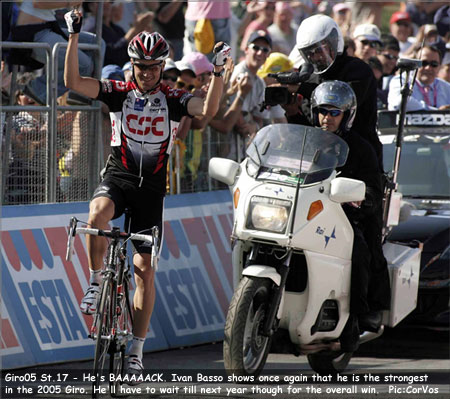 Expect to see Basso with arms aloft at least one more time in this year’s Giro.

Savoldelli dug deep to limit his losses to Simoni, coming in 42 seconds down. It might not be enough for Simoni though, who will probably lose significant time to Savoldelli tomorrow. That should set things up very nicely for a last-minute, ‘Hail Mary’ style assault on the Colle delle Finistere, or even earlier on the first ascent of Sestriere from Simoni on Saturday!

Di Luca rode himself most likely out of contention for the overall when he lost a solid minute to Savoldelli on the final climb – he went from 2nd on GC at 0:25 to 4th at 1:26 – still an impressive showing for Di Luca, but he’ll have to fight to get a podium spot from either Simoni, Savoldelli, or Rujano.

A better scenario could not be asked for going into the final two crucial stages – Savoldelli still leads, but there are three riders (Simoni, Rujano, and Di Luca) all within 1:30 of the lead, not to mention a healthy Basso who will probably be the orchestrator of much action in the next few days.

Ivan Basso (CSC):
“Today I proved, that we meant business when we made the decision for me to continue in this race. I’ve known all along that I’m a strong climber – maybe the strongest one here. And today I wanted to win without having to sprint for it. After my bad luck I had only one thing on my mind: To win in Limone Piemonte. I said this to Bjarne already on the Stelvio. Now I did it, and it’s a big relief both for me and my team. The whole group did a tremendous job for me today, and they all deserve a big thanks. I began this race almost three weeks ago with an ambition to win. That wasn’t meant to be, and a stage win can’t change that fact – but that’s all behind me now. This victory says a lot about how much I’ve developed as a rider. A development owed first and foremost to Bjarne.”

Bjarne Riis (CSC DS):
“Ivan deserves this win so much, and it was great to see him pull through. We’ve done all we can to stay motivated, and that was one of the things which made today possible. Everyone could see, that Ivan is by far the strongest in the mountains. We have bounced back after a big blow, and that is worth a lot to us. It’s also important to remember, that there’s still a time trial and a tough mountain stage to go and no one should doubt the fact, that we’re aiming to win both.” – And THOSE are the words of a motivated team – don’t forget that Basso was second in the first time trial… Talk about a story there – three straight stages to finish the Giro after suffering through illness.

Jose Rujano (Colombia-Selle Italia):
“It was a nice race finale. Although I have a little flu, I haven’t lost any condition. I hope to do well in tomorrow’s time trial. Let’s hope the legs will be good! Win the Giro? It would be a dream! The main opponent? Surely Simoni.”

Danilo Di Luca (Liquigas-Bianchi):
“It was a difficult day, but we’re in the third week and it’s normal that it’s like this. I defended myself well, and there are two other difficult stages. We’ll see. My objective is still the podium in Milano.”

Damiano Cunego (Lampre-Caffita):
“Gilberto was really strong and it’s worth it to help him. Today Basso was great, a protagonist of a nice escape. I’m giving it all myself, and in tomorrow’s time trial and the next mountain stage, we will try to do something. This Giro will help me to grow for the future, because I’m still very young. I’m glad of the compliments that I received from Hinault. In the Tour de France I’ll also meet Armstrong, and let’s hope that there will again be a good fight against Basso. It would be nice for the Italiani.”

Gilberto Simoni didn’t want to do any interviews right after he crossed the finish line, as it seems he was really disappointed (that’s putting it nicely) about Rujano who stole 2nd place on the day from him after Rujano sitting on Simoni’s attack.