Can he make it three in a row tomorrow? It’s all Basso all the time now. It appears that Basso gave the top 4 on GC most likely the biggest gift of their careers when he fell ill (albeit unintentionally) – there’s no doubt as to who the strongest rider in this year’s Giro is. Savoldelli, though under a pressure a bit in the last few days, rode excellently and put decent time into his nearest rivals – Simoni, Rujano, and Di Luca.

Today’s 18th stage was the final time trial of the 2005 Giro. The route was a tough 34 km between Chieri and Torino – with the solid 7 km ascent of the Colle della Superga right in the middle. 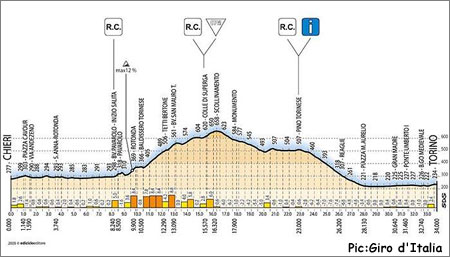 The Superga is a significant hump in today’s profile.

Ivan Basso, as hoped for and expected, came good in today’s final time trial taking his second victory in succession. CSC almost pulled off the 1-2 again, but Vladimir Karpets broke up the party by coming in second – 11 seconds ahead of David Zabriskie, who was the early leader at the finish and through all of the intermediate checks. 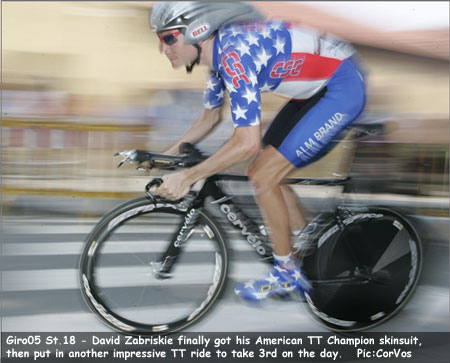 Zabriskie will finish his first Giro campaign with a win and a 3rd place in the two long TT’s.

Once Basso set off though, the result was never in doubt, as Basso beat each and every one of Zabriskie’s intermediate times. Basso even lost probably 20 seconds when he took a bottle hand-up from Paolo Tiralongo (who he was passing) in the final kilometers – an odd thing to do, but hey, when you’re thirsty you’re thirsty.

Paolo Savoldelli did as was expected and finished a solid 4th, 23 seconds behind the blazing Basso. Savoldelli did not lose any time to his nearest rivals, and in fact, put decent time into most of them, again, as expected. Savoldelli put 1.11 into Simoni, who rode quite well to take 10th on the stage. Little Rujano (all 48 kg and 167 cm of him) also rode very well (a lot better than the first TT where he lost over FOUR minutes, but had three bike changes) – lost only 1:36 to Savoldelli. Di Luca fared decently as well and lost 1:32 to the Maglia Rosa. 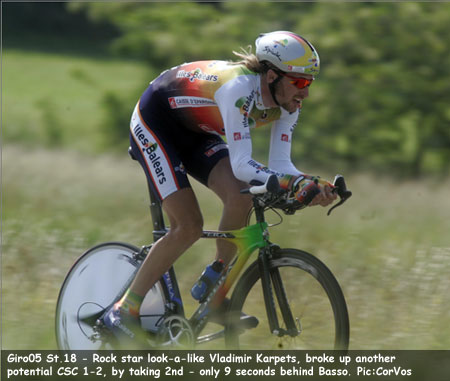 Karpets brings not only big time potential, but that perfect future cycling/rock star visage as well.

Though Savoldelli rode well, the time gaps from the stage were not quite as comfortable as perhaps Savoldelli would have hoped, especially compared to the first time trial. True, he will go into tomorrow’s penultimate and oh so crucial climb-fest around Torino with a decent cushion, but 2.09 over Simoni is not exactly a comfortable cushion. With that said, it is still Savoldelli’s Giro to lose. Savoldelli will have to have a very pedestrian, bordering on terrible ride to lose the Giro tomorrow. That, or Simoni/Rujano will have to do the ride of their lives. 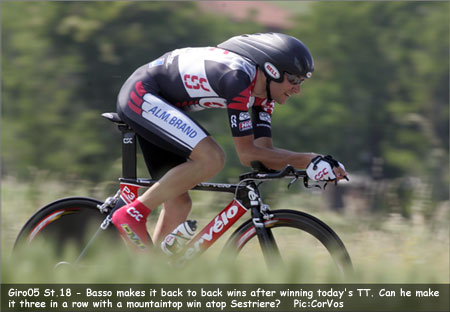 Basso couldn’t look too much calmer whilst averaging 45.2 km/h over the 34 km course, which included a 7km climb!

Ivan Basso is without a doubt the man to beat tomorrow. Of course he plays absolutely no role in the final GC anymore, his riding could very well influence the final outcome of the race. Wouldn’t it be great if the weather went absolutely horrible and Basso got away and pulled a Pantani a la the Galibier in the 1998 Tour?

The race will be decided by the attacking of Simoni and Rujano, and maybe Di Luca if he has a truly special day. The attacks will have to begin early, and the Colle delle Finestre has race decider written all over its gravel final 8 km.

Still skeptical? Check out the PEZ report on the Finestre. 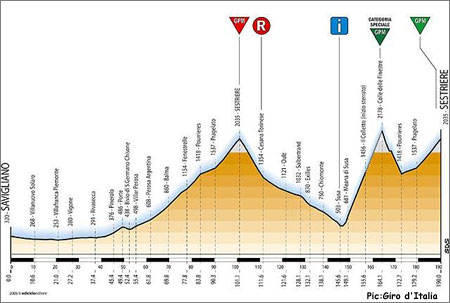 The Giro organizers must be cackling in delight at this point, with the GC so close and such an incredible stage on the menu – ASO should take note.

HomeGrrl: A Welcome Respite From Travel