After a miserable 2 Ѕ years of injuries, illnesses and bad luck that not even the most hard-bitten pulp fiction writer could dream up, ‘Il Falco’ has once more swooped down on his prey – the Maglia Rosa.

Paolo Savoldelli came to the Giro hoping to put in a top 5 perfomance and try to grab a ride at the Tour de France alongside Lance Armstrong. Instead, his steady improvement over the first 2 weeks of the race put him firmly alongside Simoni and Basso as a favorite. 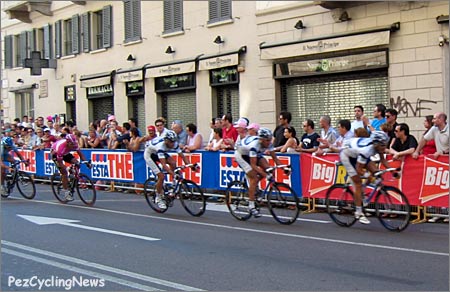 Fassa leads Petacchi and Zabel through the last turn of the 2005 Giro d’Italia.

Safe negotiation of the Dolomites, and especially yesterday’s monstrous day over Sestriere and the Colle delle Finistere, showed that Savoldelli had regained all of the strength and retained all of the tactical nous that won him the 2002 Giro.

It all looked lost yesterday, but for the judicious help of the Davitamon-Lotto boys, so you could forgive Savoldelli for a day off on the run-in to Milan today. In fact, just about everyone had a day off today, with the average speed at a very tranquilo 37.2 km/h – and that after the pack absolutely noodled their way through the first 2 hours at a speed that even your humble correspondent could have managed.

Of course, I’d have been nowhere once the pace lifted. One of the first off the front was Cofidis’ Matt White, who lasted 10 kms, the last of them with Dave Zabriskie for company. Next up, another Aussie attacked, in the shape of Matt Wilson, but again no dice.

Discovery Channel and Fassa Bortolo were keeping things in order, with Francaise des Jeux trying to muscle in on the act. Velo, Baldato and Ongarato kept things hot for Petacchi and he easily creamed Zabel and Forster in the sprint, for his 4th stage win in this Giro. 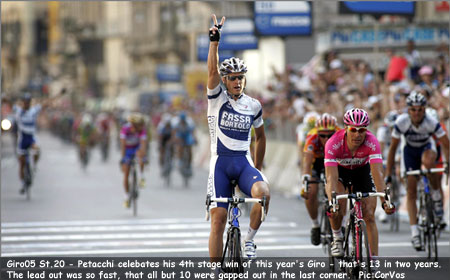 Petacchi had a bike length on Zabel and a mile to everyone else – who’s your Daddy?

Savodelli crossed in the bunch to snare a second Giro win. Bettini comfortably held on to the Maglia Ciclamino (points). Zanini took the Intergiro contest. Sven Krauss managed to snag a nice little moped for his troubles in the Trofeo Fuga Piaggio – the contest that awards the man with most breakaway kilometres. Perhaps that will be solace to the young German, who held the Intergiro for most of the Giro until Zanini and Bettini decided it looked appetizing as well.

The revelation of the Giro was the little man with the big heart, Jose Rujano, who had a huge winning margin in the mountains competition, a stage win and third on GC. When we say little, we mean little, 105 pounds – and he’s only 23. He has nicely rounded off a Wild Card performance from the Selle Italia-Colombia team. It’s hard to believe that in the final few days, Rujano’s rides have been so spectacular as to completely overshadow his teammate Parra’s back to back wins last week. It’s a pity you couldn’t dream of seeing something similar from a French Wild Card team at the Tour. 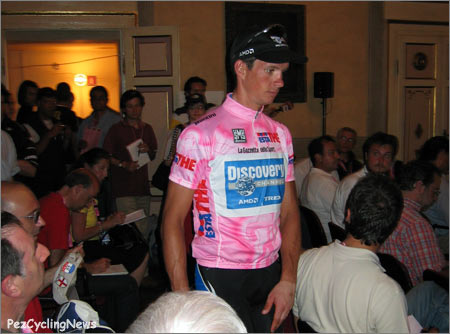 Another big highlight of the Giro has been the competitiveness. Maybe it’s due to a good crop of Italians who all want to win, or more likely, it’s down to the ProTour structure, which requires the participation of all 20 ProTour teams – who cares, quite frankly, if we can get the top 6 riders all within 4 Ѕ minutes after 20 stages, something is definitely working.