It’s raining as the bunch approaches the Stage 15 finish near Monza and I’m racing to get this posted in time to get into the press tent on the finish line, and in spite of an amazing series of unfortunate events, I’m still in the thick of this Giro…

The last couple of days have been action packed for sure, and to fully appreciate the full concept of chasing a Grand Tour, let’s go back a couple of days to Stage 13.

The Stelvio Tries To Get Me Again
Saturday was truly an epic for me. I pulled out of Bormio at 8:30AM, feeling great about getting a jump on the day, as I’ve discovered it takes at least an hour longer than planned to get anywhere in Italy. I was going to the stage finish in Ortisei, and hoped to catch the action on the Passo Sella enroute.

Factor X Returns
I was off to a great start as I made the summit of the Stelvio in 25 minutes (by car this time), when Factor X reared its ugly head once more. I arrived to find the pass still blocked with snow, and even though the crew was working to clear it, there was no telling when it might open. Deep in the Dolomites I had only one other option to make my own route – via the Passo Umbrail into Switzerland. 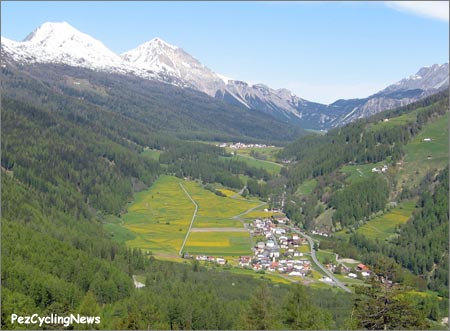 Switzerland must employ the world’s largest crew of greens’ keepers.

This made a lot of sense since it was in fact open. But factor X was going for a double-play: within 5 seconds of stopping my car, steam began pouring out from under the hood, and fluid was draining from the engine faster than I’ve been draining wine bottles. A small group of older Italian gents gathered in front of my rental and began debating my fate.

I felt my day’s plans being seriously threatened at this point. A hesitant look under the hood revealed my anti-freeze had exploded from the extreme engine-stress my race up the pass had caused. At least I was on the top, and could always coast back down… Luckily a quick fill with water and I was headed to the land of Toblerone and numbered bank accounts. 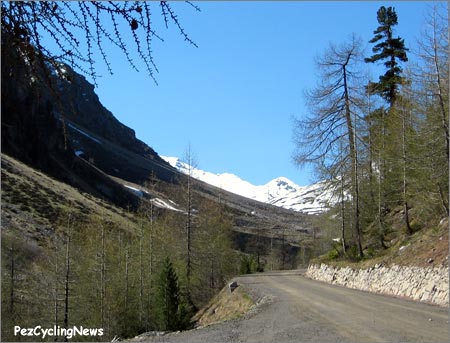 Looking up the Umbrail pass to the Stelvio. Yup – that’s another dirt road for about 8km.

The drive down the Umbrail was great – it’s a beautiful route that should be experienced by bike. I was feeling good again.

Sadly, this euphoria was short-lived as I soon encountered a 50km Saturday traffic jam on the only road to my destination. Get this: two lanes, absolutely plugged with cars and trucks – moving at 30mph (50kmh) and no place to pass. The minutes stretched into a full hour and a half before I finally broke free. It is no longer a surprise to me that so many Italians spend their whole lives in the same town – getting around anywhere just takes a loonnnggggg time.

Bouncing Off The Bottom
Amazingly, I somehow got to the Ortisei finish around 1:30PM – my planned 3 hour drive took 5. My luck was turning though, as I got hooked up with my creds and had just enough time to drive the 20km up to the Passo Sella in time for the race. 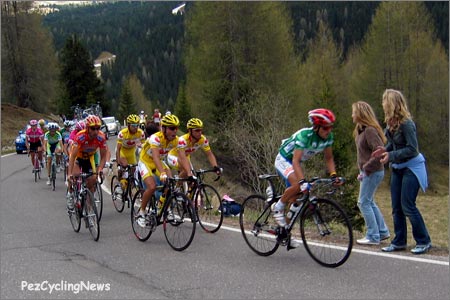 Here comes the Giro! The lead group of riders heads up the Passo Sella on Stage 13. We almost missed this action, because there hardly any fanfare in front of the group (a couple of motos and a car was all) – so unlike the TDF. 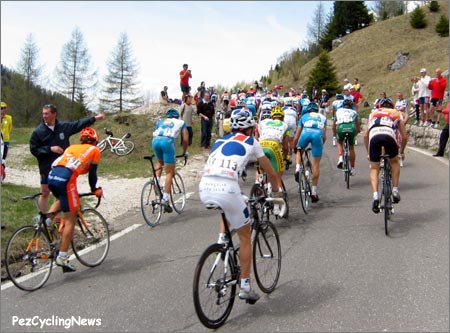 The gruppetto pass by on the Passo Sella.

The day actually turned out great – I got back to the finish line and was mixing it up with the rest of the journos, I had a great chat with Neil Stephens who claims to have not heard of PezCycling, but actually did use the Aussie phrase “fair dinkum” in our conversation.

The mountain was plugged with fans, so heading down was out of the question – I’d already spent enough car-time for one day. So I spent a couple hours in the press room filing yesterday’s pics (see our Stage 13 report), and eventually got to my hotel at 9:00. By total fluke I bumped into the group from NonStop Ciclismo Tours, and after the daily chat with Mrs. Pez, eventually made lights out at 1:00 AM.

Stage 14
Determined to actually slow my pace down today, I was on for the stage start, and then a drive to a “relaxing” 3 consecutive nights in the same hotel – what a concept!

First stop was the Village Depart, where the pre-race schmoozing is only outdone by the variety of characters that can only be found at the Giro. I’m sure I saw Cipo 3 or 4 times, but on closer inspection discovered several Super-Mario wannabes sporting the tight black t-shirt, slicked back curls, 5 day stubble and latest D&G shades. Then there’s the local fuzz – the Giro security – these guys manage even more self-importance than the Tour gendarmes, and do it with considerably more style. I even saw one of the moto guys pull a wheelie up the Passo Sella – no lie.

And of course there are the ladies. If you have any interest in feminine beauty, then Italy is the place for you. There’s little point in trying to describe how or what they do, so just stay tuned for our Daily Distractions al Giro – needless to say my ‘trigger-finger is a bit tired this eve. 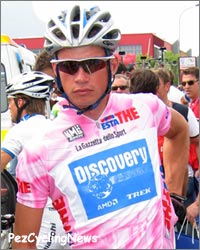 Paolo is one serious customer

Watching the riders sign in is always entertaining. Some linger among the fans enjoying the attention (like Paolo Bettini), while others clearly have other things on their minds (I’ve yet to see Paolo Savoldelli smile, even on yesterday’s podium as he showered the girls with champagne – but my guess is he’s out to silence his critics – so we’ll hope for a smile when he makes Milan in pink.) Judging by fan response, the most popular riders are: Paolo Bettini, Alessandro Petacchi, Erik Zabel, then Cunego, Simoni, and Di Luca. 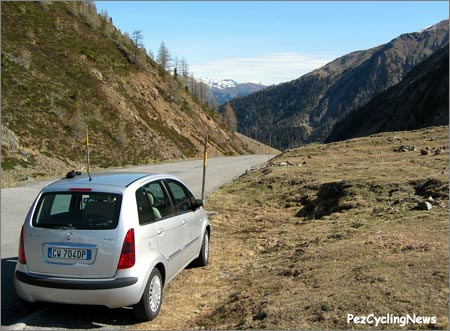 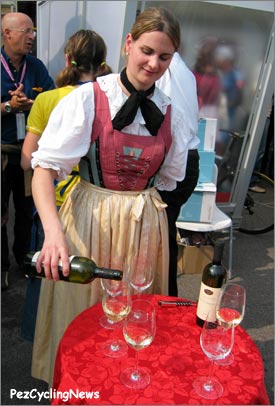 Without a little wine tasting at the start village – it just wouldn’t be Italy now would it? 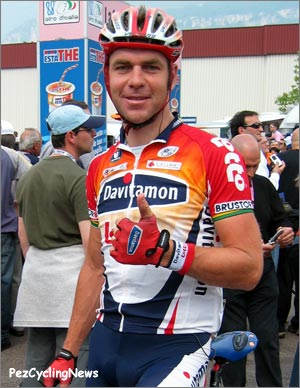 Henk Vogels told me he was hurtin’ after yesterday, but if he got through today we’d see him in Milano. 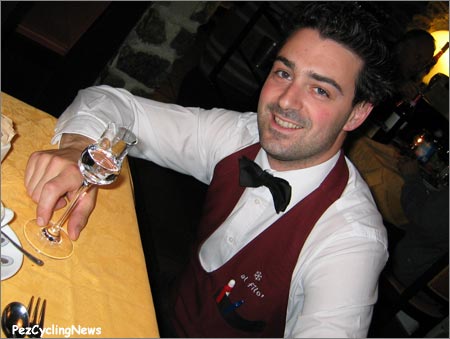 Another Italian waiter delivers another fine grappa… I’ve stayed my course of enjoying a different grappa each day, but just like this Giro – I’d have to check my itinerary to tell you what day it is or how much longer this “Italian-bike-racing-grappa-drinking” assignment will last.

Grappa di Pez
Just what’s the deal with grappa anyway? Well, just like rocket fuel, there’s good grappa, and bad grappa. The kind my inlaw’s neighbor makes on the homemade still in his garage qualifies as the latter. And like learning life’s most valuable lessons, one must make mistakes to understand the best way to go – hence I’ve had more than my share of bad grappa. You know the kind that burns like lit gasoline all the way through? But I’ve also found some great grappas. Like most good libations, I prefer a smoother taste and feel, and always enjoy my grappa after dinner, either with an espresso or dessert –or both. And grappa does make an excellent dessert in itself.

It’s time for a shower and dinner – Ivan Parra just pulled a Pantani and won back-to-back stages in the Dolomites – what does he have for us next week?

Periodization For The Mind