It’s 4:23PM at the Stage 18 TT in Torino, the heat is melting the pavement, and Simoni just left the start house. The past few days have been action-packed as ever, but today was extra-special as we followed Alessandro Petacchi through his entire TT ride – and got the pics to prove it! 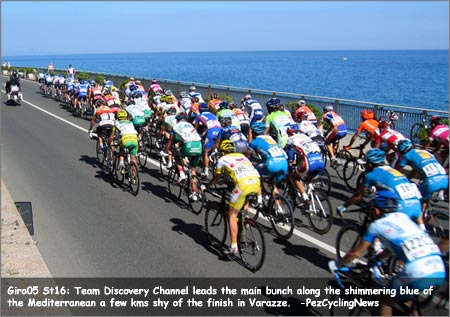 When Last Heard From:
… I was several hundred kms away, and in the past 3 days I’ve travelled from the rest day near Milano, to the azure blue Mediterranean coast at Varazze where we did an awesome 90km ride along the coast just after the race went by, then yesterday we bolted early so we could ride the last 45km of the brutal mountain stage to the top of La Tenda – another unbelievable ride with a batch of stories for the next few days, and after another 9:00PM arrival at our hotel last night, we arrived on the sweltering tarmac for the TT start in Chieri, some 35km away today. 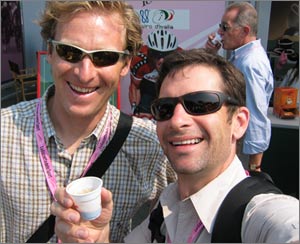 The Giro: More fun than a person should be allowed to have… Just when you think the most incredible thing has happened – something better comes along. Here my PEZ-deputy Francis Kelsey and I try to keep pace with the “villagio departito” this morning. 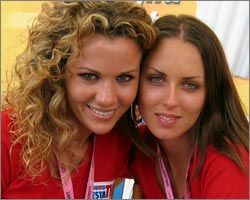 Michela and Manuela – presenters of the pink jersey and subjects of a PEZ-Clusive interview – stay tuned for that one.

The days here are filled with moments that alone are extraordinary, but lived in the space of a few hours, they just leave your head spinning. For instance, today we logged an interview with Michela and Manuela – the beautiful girls who present the maglia rosa each day, then got a tour of the Saunier Duval-Prodir team bus, and finally decided to drive the TT route from the start all the way to the finish in Torino. 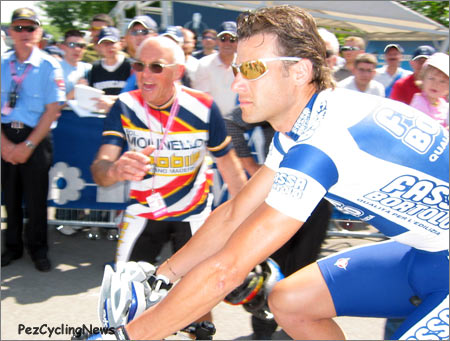 The tifosi go nuts when Ale-Jet shows up.

Hey, Isn’t that Petacchi in The Start House?
Today’s stage 18 TT began as another tough morning scouring the villagio departito for “distrazzioni del giorno”, knocking back espressos, and as Banaerama would say… “talking Italian”. 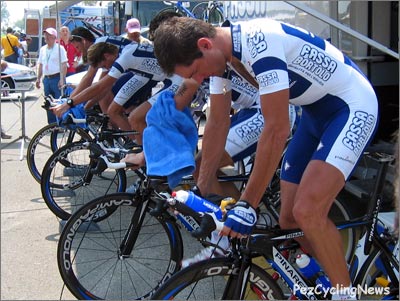 Petacchi and the Fassa boys warm it up before the tt – completely unaware that he was about to be chased by the PEZ-crew.

Scusa Scusa – PEZ Crew Comin’ Through!
The press creds allow access to the closed course route, and so we took the opp to follow a rider on his run. Since we wanted to get into Torino before the leaders started, we slotted into the schedule to follow one of the rider further back on GC. This meant we could follow behind a team car chasing a rider on his actual TT run. 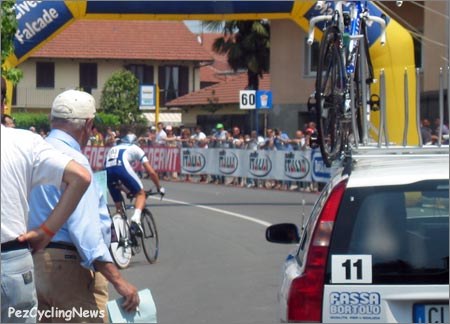 Ale-Jet blast’s onto the tt course, right in front of us!

When we pulled into the chute beside the tt start house, the team car in front of us was Fassa Bortolo… then we saw Petacchi himself wheel into the start house! ZOIKS Shaggy – we’re riding with Ale-Jet! 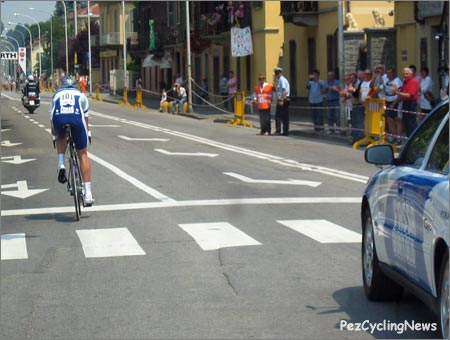 Petacchi winds it up on the flats before the climb – he cruised at 50km/h.

Less than a minute later he was off, blasting out of the start house and onto the course. The first few hundred meters were routed over cobblestones and very narrow streets in the center of Chieri. He quickly got up to 50km/h and our tires were screeching as Francis floored it to stay with him. Fans lined the streets and cheered as the lead cop, Ale, the Fassa car, and the mighty Pez-mobile sped past.

Out of the town and on to open roads, Ale kept the pace high – around 50km/h, as we approached the main obstacle – a tough climb of 7km that gained 400 meters, and even had a few 12% sections. After about 8km on the flats, the climbing began. 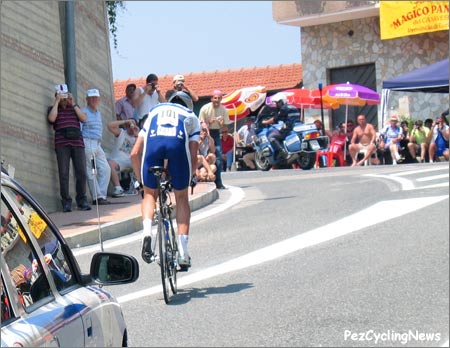 Ale was out of the saddle hammering most of the 7km climb.

The climb – like all of ‘em at this Giro – was STEEP! The guide book showed one section of 12%, but it was 9-11% for several kms and some very long stretches. Petacchi motored. He stood up and just pounded the pedals as the climb went up, and up, and up.

Certain sections were packed with fans, and several times Ale was joined on the road as tifosi ran along side yelling and screaming encouragement. 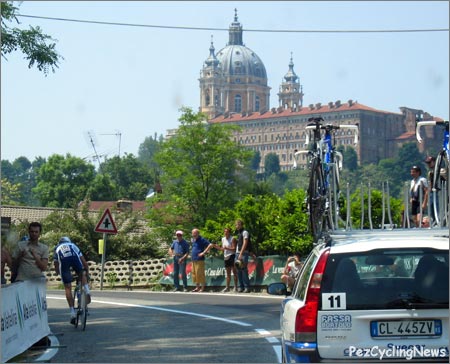 Half-way home, the top of the climb is near, but don’t stop to enjoy the view…

Finally, over the top, things got reeeeally fast. Ale was flying and caught his minute-man – a Gerolsteiner rider – on the descent. The turns swooped and dove but not so tight that you couldn’t rip it. And that’s just what he did – our tires were squealin’ as we watched Petacchi drop us at 90km/h!!!!! – our guide book went flyin’ out the window around one turn… It was F A S T. 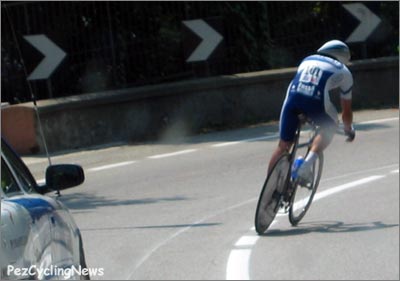 Down the descent, Ale drops PEZ at 90kmh. 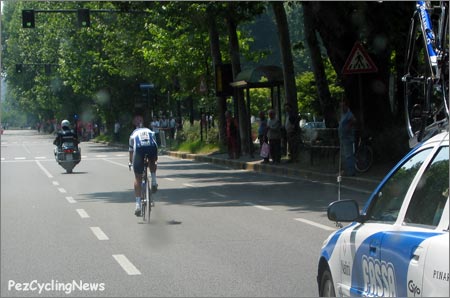 Inside the final 5km.

Back onto the flats for the last few kms, Ale just blasted along at 50km/h, no problemo. The River Po on our right offered no respite from the heat – and likely made things worse with the heavy humid air. 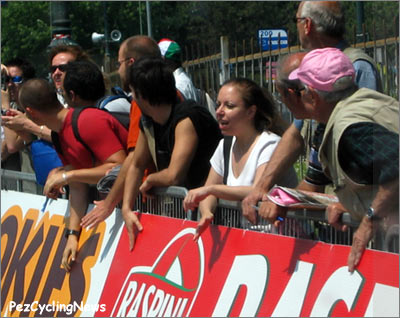 The fans go ape, bangin’ the boards as Ale flies by. 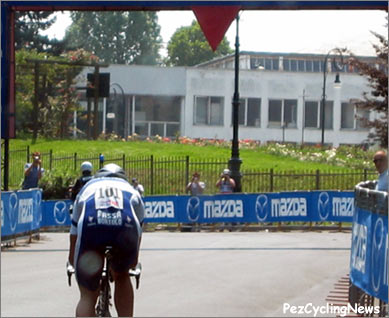 The red hangs like dead weight after full effort. 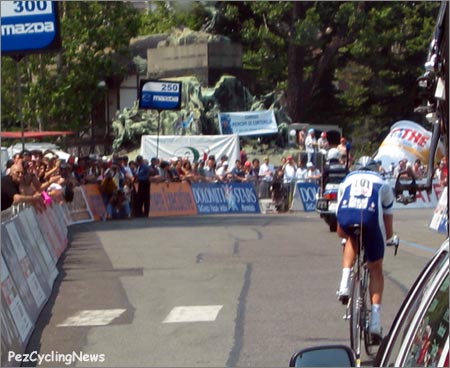 Inside the 300 meter mark – Ale’s favorite place to go fast.

Petacchi Clocks In –
As I finish this story, the official results have just landed on the table beside me (they have guys dropping off endless results sheets after the stage), and I see Ale clocked 49:00 even, good for 44 place. The winner was Basso, who ran a 45.249 km/h average – VERRRY fast considering that climb… wow!

It’s now 6:14, the press room is once again full as the international press jam to get their stories out…

Tomorrow is the much feared and penultimate stage featuring the huge climb over the Colle delle Finestre – (PEZ previewed this climb a couple weeks ago) – and we plan to ride it tomorrow for our own final day of punishment, before celebrating on Sunday in Milano. For now I think I’ll celebrate the day with a nice cold cocktail – a classic Negroni should do it – and a nice dinner in Torino… 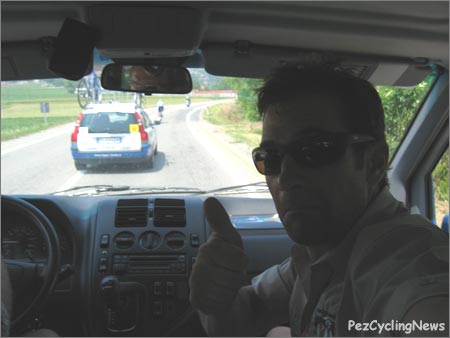 Yeah Baby! We’re deep inside the TT at the Giro.

HomeGrrl: A Welcome Respite From Travel