It’s the weather that’s not cooperating. The days since my arrival at the Giro’s final week have been rain-filled and gloomy. After getting shutout of my planned big pass ride on yesterday’s stage 15, I was determined to sample the finishing climb today. And inspite of the crappola weather… redemption was mine, although not exactly as I’d expected.

Today’s plan was an assault of the final climb of yesterday’s stage – taking in the 8km climb to Paso Tre Croce (avg. grade 7.9%, max 12%), and the 7.1km grunt to the top of Tre Cime di Lavaredo (avg. grade 7.6%, max 18%). Anyone watching yesterday’s race saw just how steep the final slopes are, as the top pros put on their best grimaces while trading punches on the way to the top. 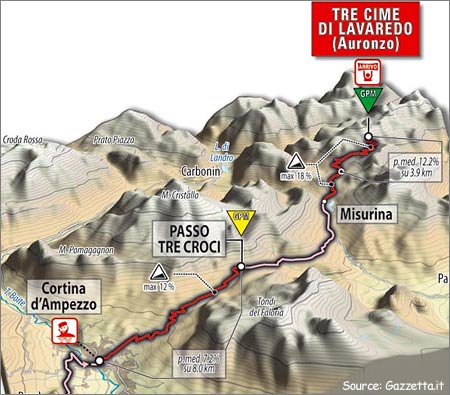 The climb to Tre Cime looks even better in real life.

But before I get to today’s adventure – there were a couple of worthy notes from yesterday’s stage-drive: 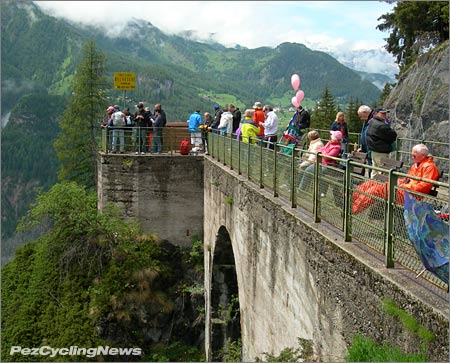 • We drove almost the entire 184km of yesterday’s Queen Stage to Tre Cime, and along the way I was continually reminded of how much Italians love their cycling. Even though the race was not due past for 3-4 hours, the corsa was never without fans waiting patiently for the big show to arrive. Even in the early kms, every cafй had a crowd of folks perched outside watching the road for the race – and often waving at us as we passed. This crowd is staked out on the slopes of the Passo Giau, with an awesome view of the switchbacks below. 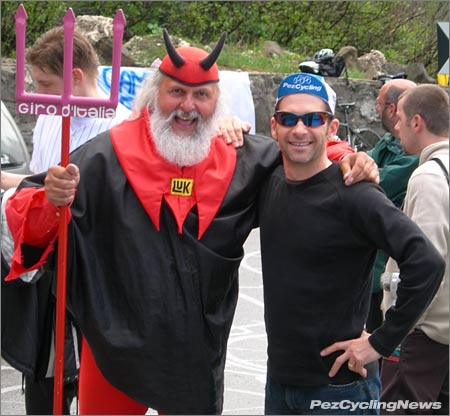 • It was time to update my old photo of the Devil and me from Le Tour ’03. Amazingly, Didi does not change one iota from year to year – but then why mess with success? It would be cool to see him find a ‘Devil-ette’ to extend his brand, but I suppose it’s tough attracting the ladies when you spend months of the year living in a cramped van (apparently without laundary services), perched on roadsides in the middle of almost nowhere, and chase professional cyclists in red spandex body suit while screaming incoherently… Chapeau to the man though, as cycling would not be the same without him.

And Now For Today’s PEZ-Report 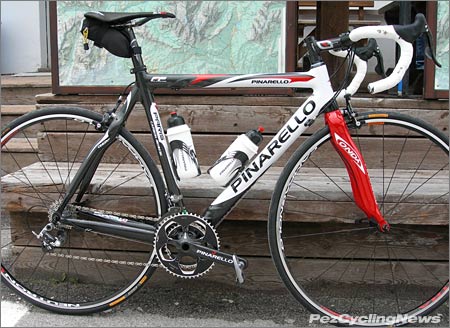 • What would the Giro be without another sweet Italian ride? I’m lucky to have not one – but two beautifully crafted bikes from two legendary Italian builders. Today’s pick was the Pinarello Paris – full carbon, Campy 207 record gruppo, Campy Neutron wheels, Selle Italia saddle, and Pinarello’s own bar, stem, seatpost and crankset (50/34 compact of course). This is my first ride on the Paris, and like the best things Italian – it attracts instant admiration. Not only because they’ve been building gorgeous top line bikes for years, but because they’ve also evolved with the times and added enough of their own design elements to clearly state they are not ‘followers’. The ride is solid from top to bottom – and today that included over an hour of climbing and a lot of kms of descending on fast twisting roads. I’ll be logging more miles through the week, and expect a full report after the Giro. Special thanks to Pinarello and their US distributor (GitaBike.com) for making this happen. 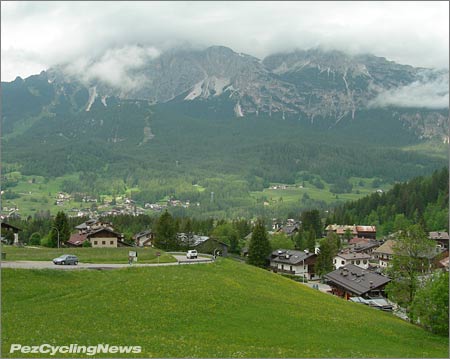 • Starting from Cortina in the valley below, the first part of the climb runs almost 8km and gains over 500m on wide twisting switchbacks – this is a great climb. Never boring and not too long, it’s a must do for anyone interested in conquering the great climbs of the Giro. It was much quieter today – you’d never even know what happened here yesterday. 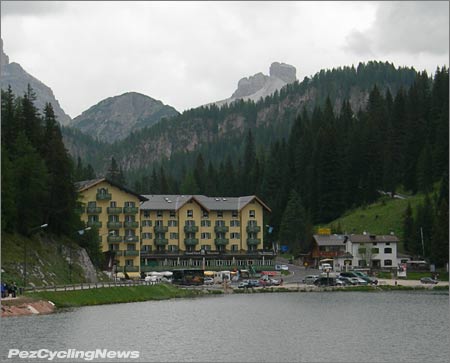 • The views on this ride are stunning – I’m pretty sure that castle-like mountain in the distance is the Tre Cime di Lavaredo. 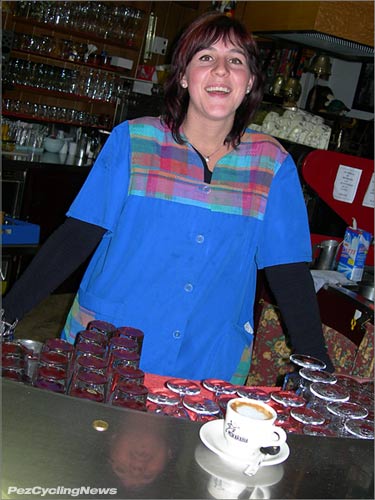 • The town of Misurina sits on a lake midway between Cortina and the top, and has a host of cafes that provide more than enough enticement to peel in for a quickie. 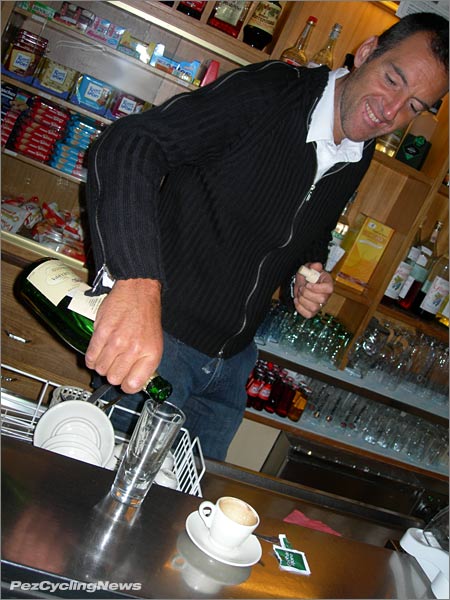 • Somewhere around 3000m to the top, the skies closed in and the rain started to fall – I’m talkin’ big fat splashing drops – and lots of ‘em. Looking of the 12% grade in front of me, the gray veil had descended and completely obscured the peaks. It got the best of me, and I pulled on the last of my rain gear and turned for home. It was coming down hard by the time I reached the refuge of Antonio’s cafй at the Tre Cime base, and considered this an excellent excuse for another espresso macchiato. I was the only patron, and after some time chatting with Antonio, it was decided that some additional fortification was needed to insulate my bones for the ride back to Cortina – “a shot of your best grappa signor!” 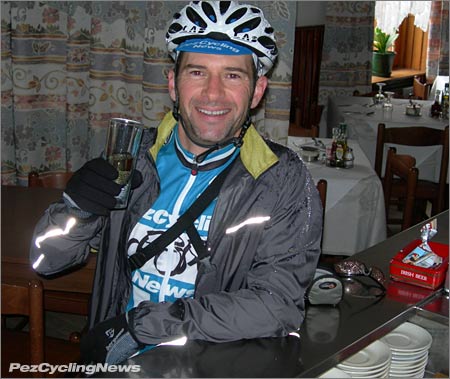 • I’m happy to report the grappa did the trick – a few minutes later the sun came out for the descent. 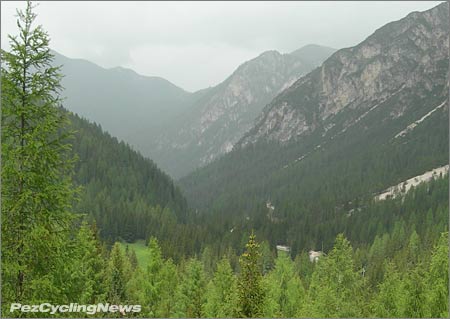 • A right turn in Misuria sets you on a great loop back to Cortina – beginning with a 7km descent down this valley. 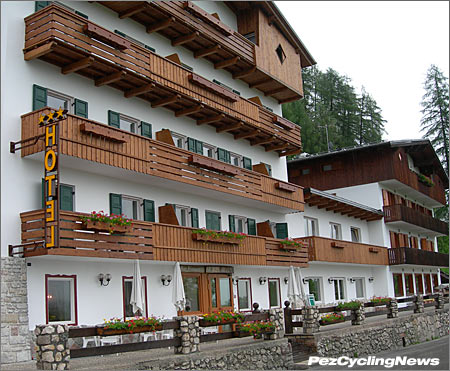 I made it back to the Hotel Des Alpes (www.desalpescortina.it) – an excellent place to stay in Cortina – in time for a hot lunch and massage – they offer a bunch of ‘spa’ treatments here. All in all – it’s been a pretty good day – even if it is still raining. 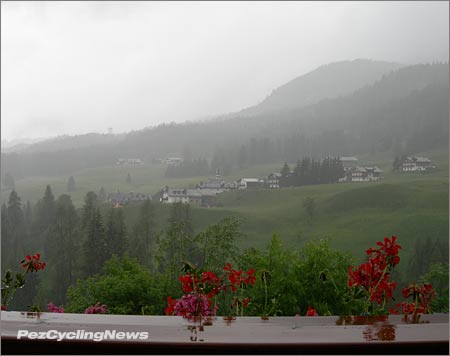 • The rain stopped for a while, but rolled back in as I write this – here’s the view from my ‘office’ – the Passo Giau is lurking just behind those clouds – and is spectacular on a clear day.

Tomorrow I’m off to the stage finish in Lienz Austria – and hope to sneak in a ride of the final part of the corsa – weather permitting of course.